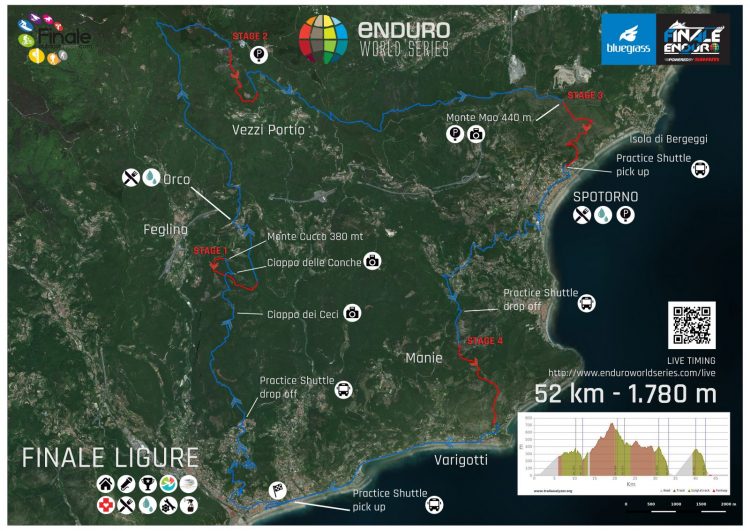 Stage 1 | Border Line | 2km | 242 D-
The first stage starts exactly at the top of Monte Cucco. It’s a trail never raced on, quite far away and deep inside the vegetation. It’s a succession of berms and counter berms buried inside a wild and untouched environment.

Stage 2 | Rocche Gianche | 2km | 274 D-
This second stage is a trail previously used in the 2016 EWS edition. It’s the perfect emblem for the slogan “from the mountains to the sea”. It’s a stage that is driving bikers in their masses to Finale every year. Unique.

Stage 3 | Mao Crest | 3km | 383 D-
This is a brand new stage. The Monte Mao is a mountain that sits on the Gulf of Ligure and the city of Spotorno. The trail itself – Mao Crest – isn’t new but no edition of FinalEnduro has taken place there in the past. However, this trail was already famous in 1999, where an epic-riding scene of Kranked 2 took place. This segment was a step in helping Finale Ligure to become famous.

Stage 4 | DH Men | 3km | 282 D-
It was only possible to end the race with a classic and iconic trail – DH Men. For more than ten years, this trail has been raced in mountain biking and is emblematic of FinalEnduro in the world. Every year, thousands of fans stand out at the side of the stage cheering the athletes and being as close as possible to the show and action of an EWS.

FOR You Card per supportare il trail building a Finale Ligure