Seewald has been threatening to show his World Champion credentials all week, and today that finally proved the case as he and Stošek powered to an important stage win.

The Canyon Northwave MTB pair remain in second overall, but they have cut the lead of NinetyOne-songo-Specialized’s Matt Beers and Jordan Sarrou down to 01:43.

“Our plan worked perfectly today,” said Seewald. “We controlled the pace on the long singletrack section from the front and could afford to take it a little bit easy – this was good because we didn’t know the trail that well. Then on the steep climb, we attacked, which was our plan all along. It was brutally hard – I didn’t believe that we could actually get a gap – but we managed to get one and we held on to it.” 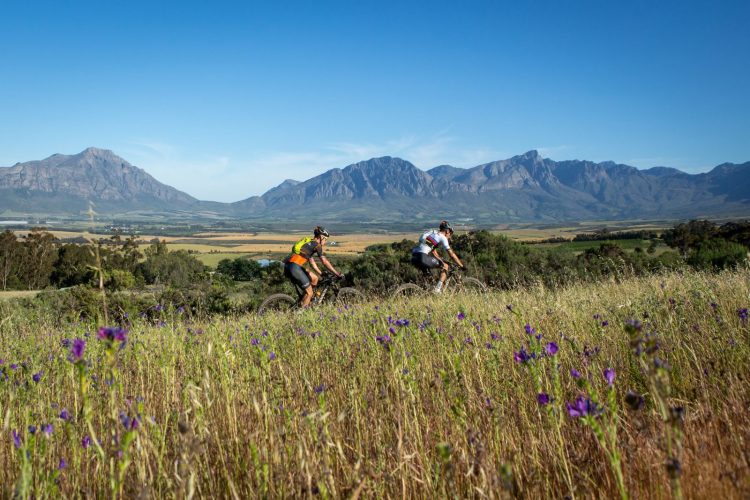 Samuele Porro and Fabian Rabensteiner (Trek-Pirelli) managed to stick with Seewald and Stošek on the climb, with all four riders racing towards the finish on the final, flattish last 10km. “We had worked hard on the climb,” said Seewald. “Towards the finish, we had Trek-Pirelli with us so we could all work together and get over the line as quickly as possible.”

Czech rider Stošek, battered from his efforts on the stage, was thrilled with the team’s first win. “The Trek-Pirelli guys worked well with us over the last few kilometres so that we could get to the finish line in good time. In the end, I was confident we could win the sprint because Andreas had good legs today, he almost killed me on the climb. I am very happy with our first Absa Cape Epic stage win.” 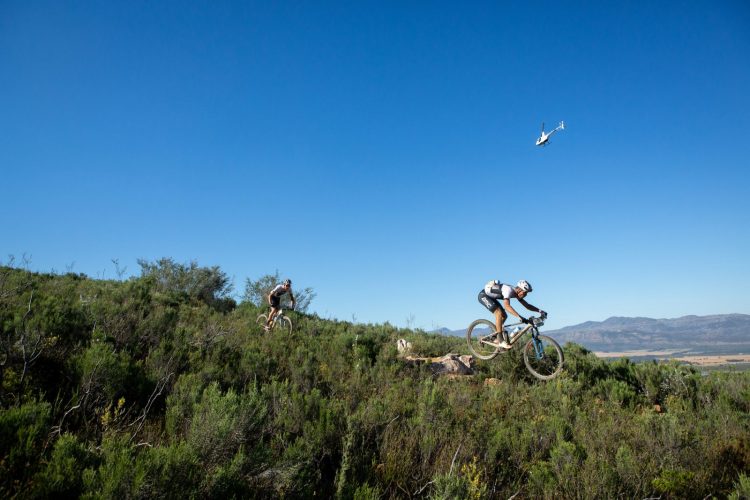 For much of the men’s Stage 3 race, the leading teams remained together throughout – indeed, the real racing would only start on the blockbuster Fanties Pass, arguably the toughest climb in the 2021 event. Canyon Northwave MTB made their move halfway up the climb and it was only Trek-Pirelli that could respond.

Urs Huber and Simon Schneller of BULLS were able to finish third on the day, with BULLS 2’s Martin Frey and Simon Stiebjahn (fourth) riding home just ahead of yellow jersey wearers, Beers and Sarrou.

At the finish, Sarrou lay in a crumpled heap. “I’m feeling so exhausted,” he said. “It was a hard day. We had to climb that huge hill in the heat. It was so steep; just incredibly hard, but we managed to bring the gap back a little bit after they broke away. We combined nicely with BULLS 2 on the flat sections to keep the gap down. There are still some stages to go. We worked as hard as we could today, so we are happy with the result.” 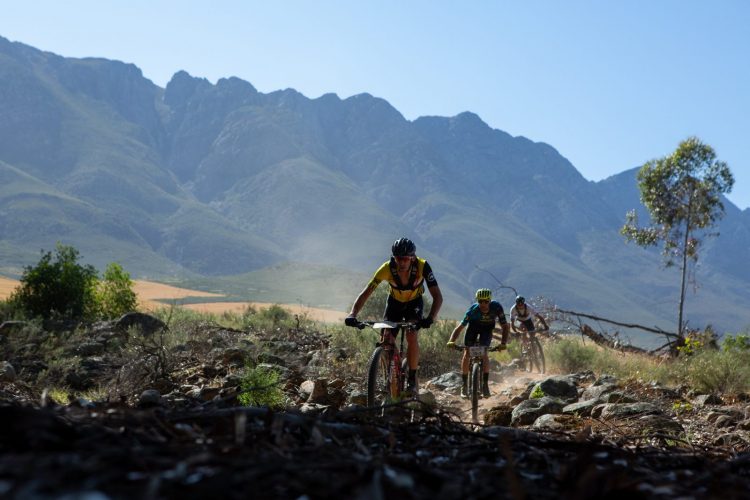 Sporting a hydration pack for the first time at an event, Sarrou’s partner Beers was happy with his foresight. “I don’t even have a hydration pack,” said Beers. Alan Hatherly organised it for me last night; he took it to my dad at around 9pm, then my dad brought it through to me this morning. I’m glad I did it. I didn’t cramp, so it obviously worked well. It was a super hard stage, especially in that heat. We worked well as a team, though, and I thought we finished well.”

Stage 4 of the Absa Cape Epic will take the riders from Saronsberg (Tulbagh) to a rearranged finish at Goudini Spa in the Slanghoek Valley. At 73km-long, the ride may seem short, but with punchy climbs and rocky terrain on the route, the race will certainly take a few more twists and turns.

They won everything Stage 3 could throw at them – the Dimension Data Hotspot Sprint on Tulbagh’s 300-year-old Church Street, the race to the top of the climbs, and the race to the bottom of the descents. They finished the stage nearly four minutes ahead of their nearest rivals, Robyn de Groot and Ariane Lüthi (Salusmed), giving themselves a mammoth 11-minute lead in the women’s race general classification. 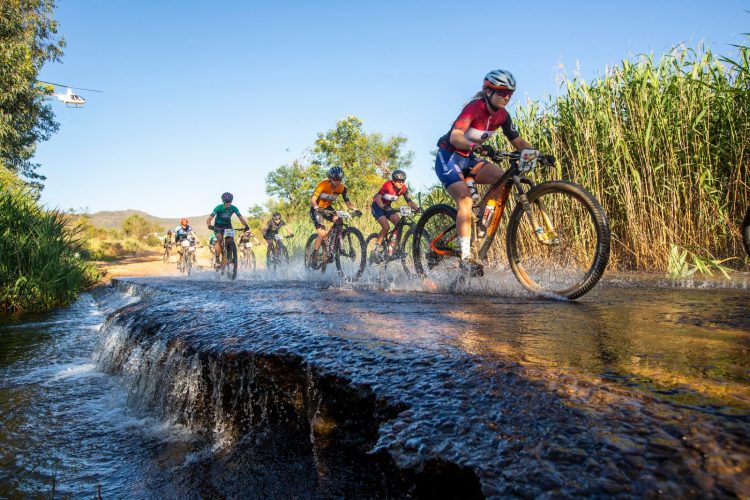 “It was a super hard stage because it was really hot,” said Frei. “We managed to get a gap on the steep, long Fanties Pass climb. Then on the technical downhill we could extend it, and in the end, we just went all out to the finish.”

Stigger was thankful that her partner was on song throughout the day. “I couldn’t have done that stage without Sina,” she said. “I really struggled. Sina was really patient and waited for me, I have to thank her for being my teammate. She was so good today – on the climbs, on the trails, on the flats, everywhere.”

The women’s race only kicked into gear around the 20km mark, where the teams raced full-throttle through the Tulbagh-based Hotspot. From there, NinetyOne-songo-Specialized, Salusmed, Fairtree (Amy McDougall and Jennie Stenerhag), Faces CST (Candice Lill and Mariske Strauss), and Land Rover Ladies (Mari Rabie and Hayley Preen) all kept together. 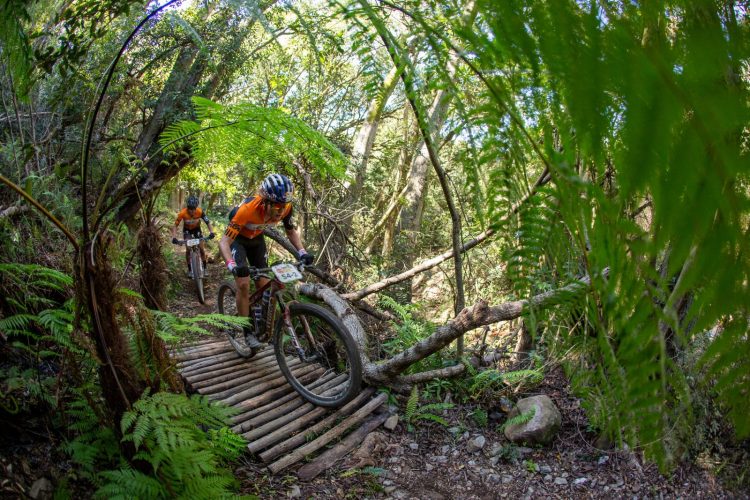 A break formed, with Land Rover Ladies leading the way. South African National road race Champion Preen looked up for the fight today, but a crash that resulted in a suspected wrist fracture ended her race participation. The scene played out with Rabie sitting on the floor, comforting her injured partner.

Mariske Strauss was the next rider to crash, her fourth in four days of racing. It meant Faces CST dropped off the front and had to race hard to close the three-minute gap.

As Fanties Pass approached, Lüthi said she felt good and managed to pull away, but partner Robyn De Groot was taking strain. “On that climb, I was not feeling well,” said De Groot. “I had a bad patch, a really bad patch. I just tried to keep moving forward, trying not to look too far ahead. I was struggling, taking it metre by metre.” 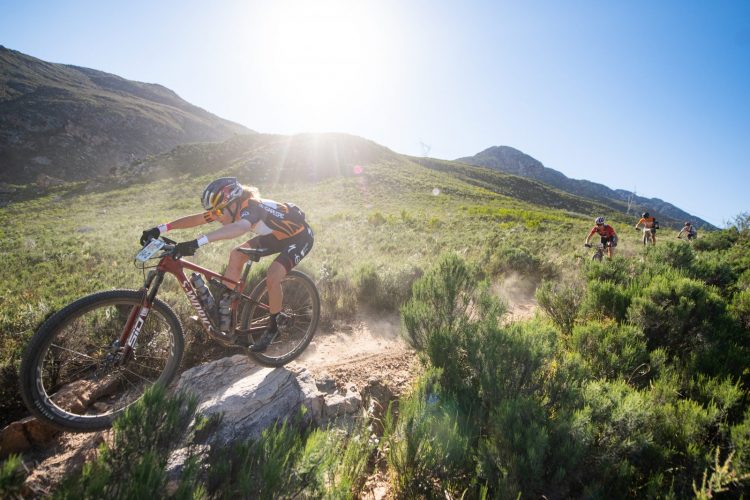 Frei and Stigger sensed their opportunity and made their move, turning the race screws in the process. “We were hoping for a bigger gap,” said Frei. “But we are happy with what we got because by the end we were suffering.”