In a group of men who are all ready and in great shape to go to battle to take top honors, it is impossible to know who will finish the day on top. There is no doubt that Mathias Fluckiger will be looking to continue his streak and go back-to-back perfect weekends in Leogang. Meanwhile, Schurter (SUI) will be looking to add another World Cup win, solidifying himself in the history books with the most World Cup wins of all time. Dascalu, Fidel, Albin, and the rest of the riders will do their best to make sure neither of these rider’s plans come true.

A notable absence from the men’s race was Tom Pidcock, who will not be racing this weekend, choosing to focus on road bikes in order to set himself up for the Tour de France. 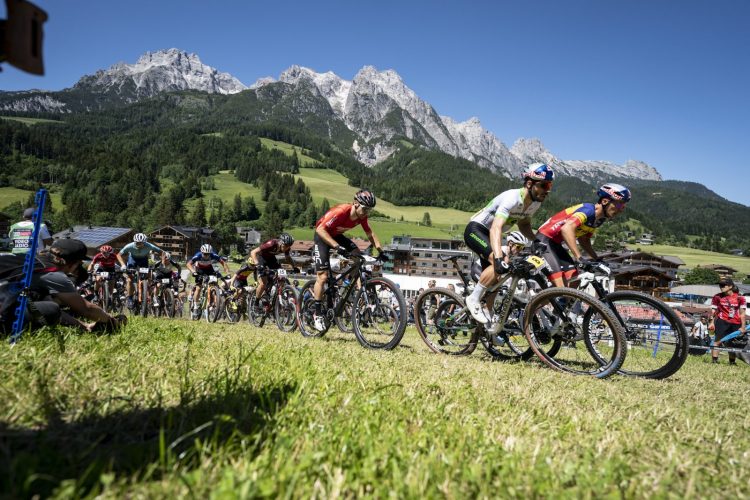 A quick start from Henrique Avancini (BRA) saw him rocket out of the start but he wasn’t able to hold onto it as Vlad Dascalu (ROU) got by him and immediately began upping the pace of the race.

Nino Schurter showed off his fitness and strength as he passed Dascalu on the first big climb of lap one. Although there was no major separation between the riders, Schurter was leading the pack.

Fluckiger changed up the top 5 with an impressive push, jumping multiple spots on the final climb of lap one putting himself in fourth place joining Hatherly, Dascalu, and Cooper behind Schurter. These men worked hard and did everything they could to not let Schurter take off as he set a challenging pace. 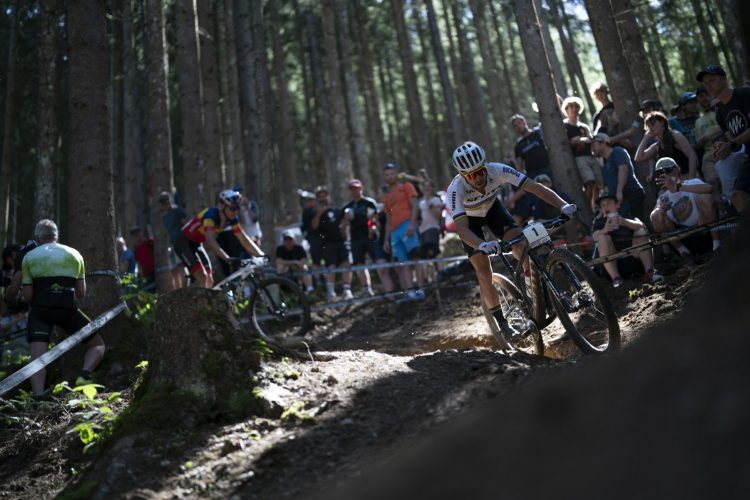 The battle was on and the group stuck together. Dascalu was able to grab the lead for a moment before Schurter showcased his strength again and reclaimed his spot out front. The group was close, with Dascalu, Hatherly and Fluckiger all crossing the second finish line all within a second of each other, trailing Nino Schurter closely.

An impressive boost from Mathias Fluckiger as he capitalized on the other seemingly relaxed riders was able to pass Hatherly, Dascalu and Schurter to take the lead. Breaking up the pack and pushing himself and Shurter out in front by 7 seconds.

The two fight it out and Schurter is able to get past Fluckiger to regain the lead as these two continue to bounce back and forth. 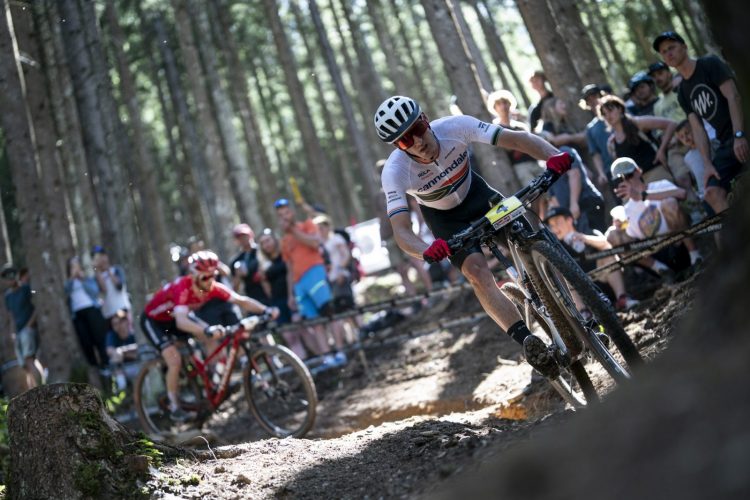 With 2 laps left, the Swiss riders took a commanding lead leaving Hatherly (RSA) 8 seconds back and Marotte (FRA) another 22 seconds back from him. Fluckiger was able to put his head down again and battle past Schurter on the first big climb of the fifth lap, with the two continuing to lead by a large margin.

An all-out sprint for the final laps sees Fluckiger unable to drop Schurter and Schurter unable to pass. The final hills saw Fluckiger gaining the smallest margin on Schurter coming into the finish. A final sprint put Fluckiger 6 seconds up, earning himself another big win here at Leogang. This gave Mathias the perfect weekend he was looking for but caused Schurter to fall short on his search for the most World Cup wins. 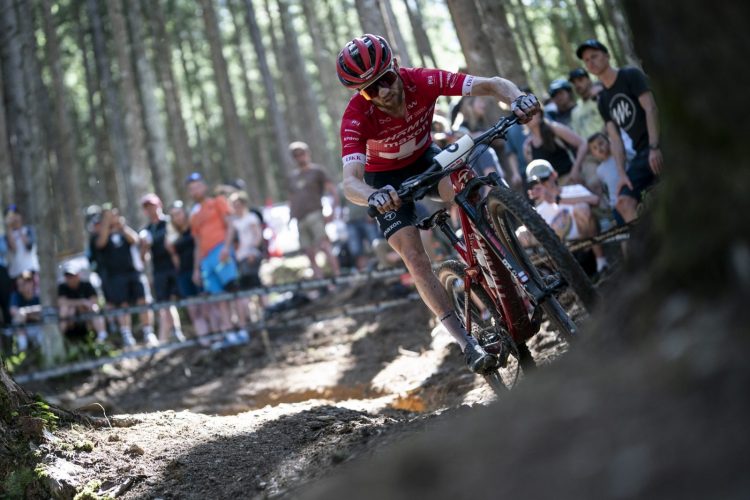 Marotte pushed hard but fell back as Dascalu battled past him, leaving him with a 5th place finish. Hatherly also lost some momentum as Dascalu picked up the pace to close the gap. Hatherly was able to hold on long enough to grab 3rd place, giving Dascalu a well-earned 4th place finish.

“After Friday’s win and today’s, I know I am in good shape – but this is just so tough. It was a great battle once again with Nino, this time a better end for me, and I am really happy about that! Congrats to him. This is tough, really tough. It’s a really demanding course here, lots of climbing and you never really have the chance to recover.“ stated a visibly exhausted yet thrilled Mathias Fluckiger.

After a strong performance in short track, Loana Lecomte will certainly be looking to have a similar Leogang to last year, winning both events while Austrian’s Mona Mitterwallner and Laura Stigger will be looking to capitalize on their home-field advantage and get their first wins of the season. Of course, no one will have an easy victory as this stacked field is hungry. 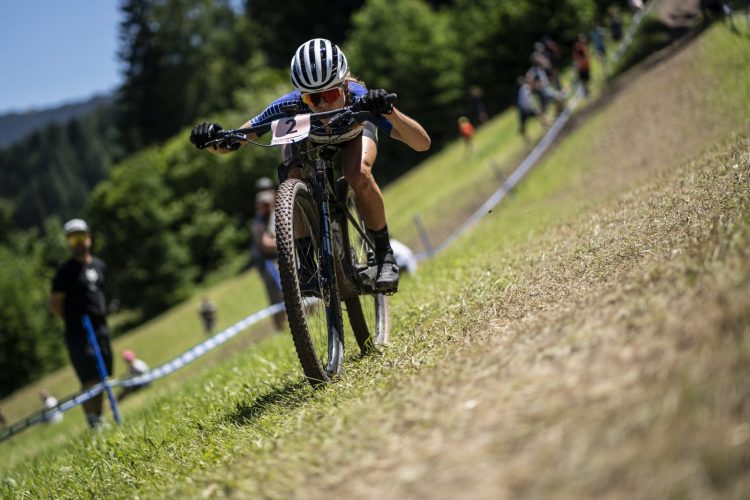 Strong challenger and reigning World Champion Evie Richards (GBR) is out of this race with a back injury while Pauline Ferrand-Pr´evot (FRA) will also not be racing, choosing to focus on other events.

An immediate pile-up right out of the start saw Austrian’s Mona Mitterwallner’s hopes of getting out in front early disappearing before her eyes. She ended up in a pile-up that saw an issue with her handlebar alignment. She ran her bike up a section of the first hill but was unable to mount her bike and join the pack, running back to have it fixed. Despite her tough fight back into the race, she ultimately ended the day in 15th place. 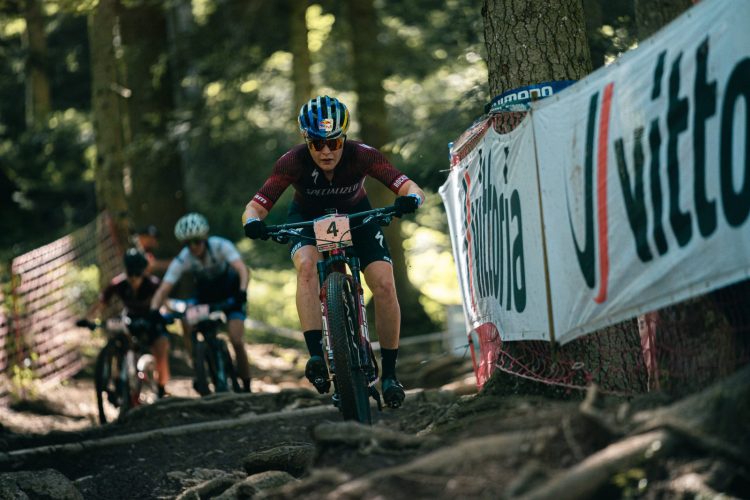 Olympic Champion Jolanda Neff (SUI) was able to hop into the lead early on in the start lap, but she was unable to add any real distance on competition and crossed the finish line just slightly in front of a challenging Loana Lecomte.

In the first big climb of the second lap, Lecomte and Rissveds were able to get by Neff and add some distance between themselves and the competition. Meanwhile, Mona Mitterwallner headed back on course and quickly began to make some moves.

The distance between the leading group of Rissveds and Lecomte has grown substantially through the first lap, putting them 30 seconds in the lead. Following a good start for Jolanda Neff it appears her legs just aren’t there for her today as she falls back to 20th place. Ultimately, she pushes back up to 8th place to end her day.

The battle for the final podium spot is the closest to watch with Specialized riders Frei (SUI) and Stigger (AUT) within a second of each other and playing leapfrog throughout the first three laps. Meanwhile, the undefeated Rebecca McConnell is having a challenging race as she falls back to sixth place with two laps left. 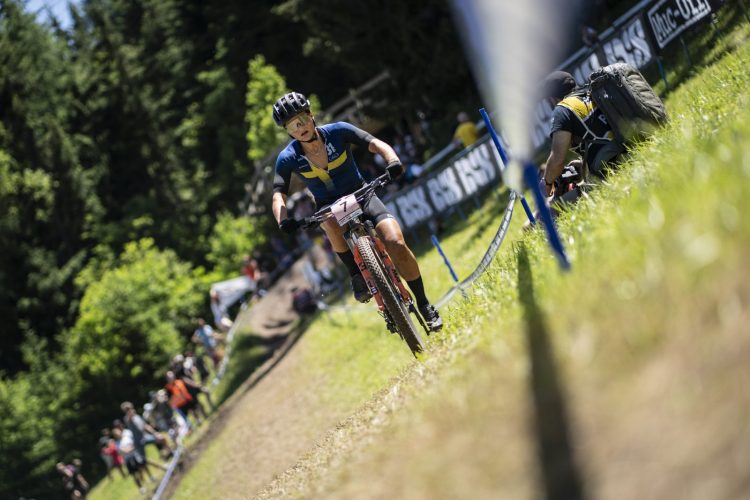 Lecomte continued her dominating performance through the next laps, and her lead grew until she ultimately crossed the finish line 1:13min. ahead of a spent Rissveds to grab her 6th career World Cup win.

Austria’s best hope lay on the shoulders of Laura Stigger, who sat in third place with one lap left. The exciting fight for third between Stigger and Frei continued into the last lap. It was an incredible show of determination as both riders were out of the saddle, but Stigger was able to add a few bike lengths on Frei, grabbing 3rd by just a few seconds.

Just behind Frei was a persistent Terpstra (NED), grabbing herself a 5th place finish here in Leogang. 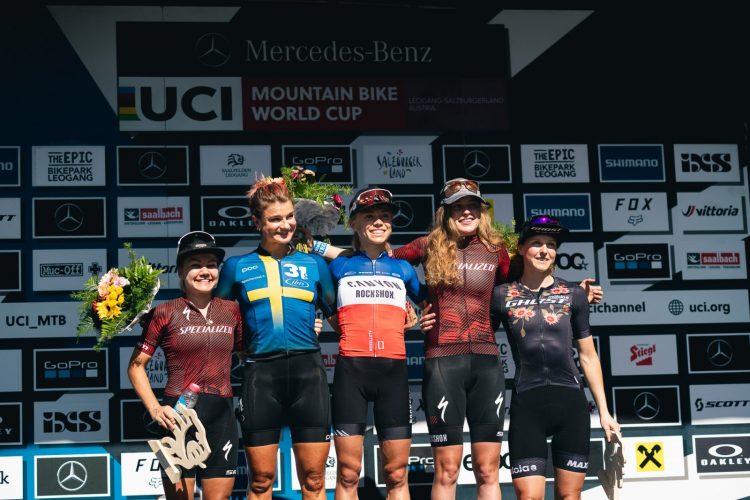