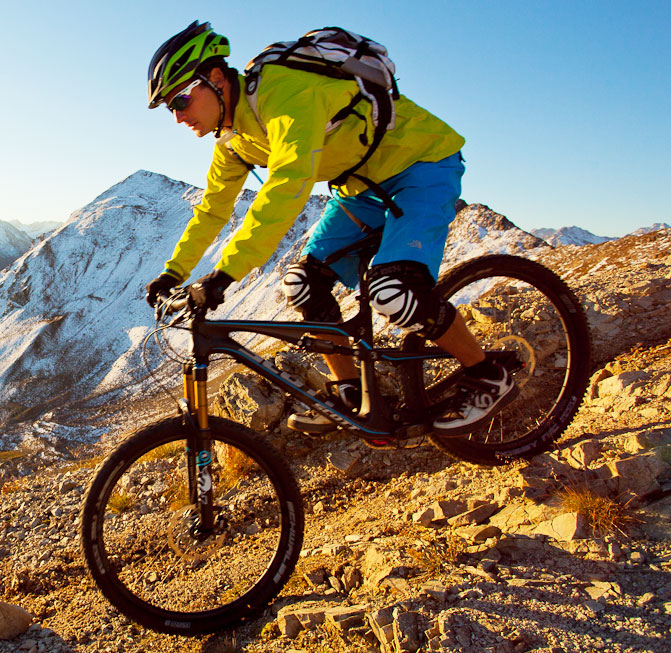 Last weekend I was invited to Davos by Scott in order to test the new Scott Genius. Actually both new Genius bikes since, it is now available in two versions: one with a 27.5” wheel set and the other one with 29”.

To be precise, it was the case of a Genius 910 and a 710, both in carbon fiber and equipped with the best components, even if these were pre-series (at the moment there are about 40 of them in the world). In fact, the XT brakes and the Reverb Stealth adjustable seatpost were missing. However, you can notice the frame, which is entirely made of carbon fiber and the Synchros carbon wheel set with a double crankset. Scott offers 5 Genius models for each wheel diameter and for nearly every budget. You can find them here.

Let’s start from the beginning. The frames and the geometries of the two bikes are identical, not considering the slight difference of the height of the bottom bracket (342mm for the 27.5” in the “low” position and 335mm for the 29”, both on M frames). Also the rear shock is identical. It is the DT Swiss Nude 2, produced for Scott and equipped with the Twinloc handlebar remote control. This command enables you to adapt fork and shock to conditions of the terrain through one lever only: full suspension, lock and traction. The traction mode hardens both suspensions, reducing the “sag” effect and herewith offering a better up-hill position and a more effective pedaling. This is due to the Dual Air Spring technology (DAS), developed by Scott and mounted in the Nude 2.

A big air volume (full suspended) or a smaller air volume, which reduces the travel and the “sag”, are activated in relation to the position of the Twinloc. It is practically the same function of the Equalizer 2 shock which was mounted on the Genius models until 2012, but it is 200 grams lighter, it is less exposed to dirt and it enables the traditional measurement of the “sag”.

Also the anchorage of the shock is new. It is provided of two positions (see pictures below) which modify the steering angle of 0.5° and the bottom bracket height of 6mm (see geometry charts slightly further down).

The adjustment of the Fox fork is the classical lockout: completely open in the full suspended position, partially open for the traction and closed in the lockout mode.

The two identical frames differ in the travel of the forks and shock:

Scott defines the 27.5” bike as a tail/all-mountain bike, whereas the 29” bike is intended for trail only. Which is the real difference between them, once you ride on them?

The first riding impressions in action

Our group on a spectacular and long traverse

Davos is a perfect location for bike testing since, there are many cable cars and mountain lifts, which bring you to the altitude where many trails climb to the top of the surrounding mountains and then lead you down to the valley. It is hereby the case of trailriding with many ups and downs, some peaks you have to conquer by pushing your bike and many downhill trails on natural terrain, without toboggan turns nor jumps (except the “Bündner A-Line” track which runs down towards Klosters – here’s my last year’s report). Summing up, it’s a pleasant experience I would recommend everybody to do sooner or later.

There was also Thomas Frischknecht with us (second in the picture). He won the marathon world champion title in Lugano 2003 precisely with a Scott Genius.

The comparison was even more interesting since both bikes have identical frames. Here are my impressions:

Me on the 27.5” at dawn, picture by Christoph Bayer

1)     The Genius 27.5” offers a greater stability and confidence during downhill rather than a 26” with the same travel. You can overcome obstacles with more ease and the relatively long travel is very helpful in various situations. The Fox 34 with 34mm stems is definitely stiffer and more precise than its 32mm sister.

3)     The nimbleness while riding downhill is very similar between the two Genius bikes. I dare to say that the 29” offers a little more balance in the sharp and narrow turns in order to do a nose press with confidence, without being a magician in bike turns.

4)     The bike that made me feel more secure and steady on rough and fast terrain was the 29”. You don’t feel a great difference between the two different travel lengths, but be aware not to fall for the commonplace of “130mm of the 29” feel the same as 150mm on the 27:5”” because it’s not rue. You feel the help of the two extra centimeters in technical sections like big steps and jumps.

1)     The fork works in a very responsive way on both bikes and it won’t bottom out in steep sections, even if it doesn’t have a compression adjustment.

2)     The Nude 2 shock works well but not as responsive as the fork. I would rather define it as “sporty”, which is a characteristic found on both Genius bikes. Up-hill riding in technical trails is very effective while riding in the Traction mode. The decrease of the sag is a real blessing in order to prevent sinking in and therefore finding yourself far too backwards in the pedaling phase.

To be honest, I preferred the 29er. You really felt the difference compared to a 26” (better traction up-hill, greater stability and confidence on fast and rough sections), while on the 27.5”, I just felt it while riding downhill, but it didn’t impress me. I am 179cm tall and I rode the M frame on both bikes. It remains the fact that the project Genius has been updated in a stunning way, with a stiff frame, which is also esthetically very appealing, and in addition to that it has an excellent system for the travel reduction, which makes it a great climber.

In my opinion, both the 29” and the 27.5” are suited for alpine all-mountain of every kind. Scott says that they also considered bikers of medium-low height, for whom a 29” bike would not be ideal. The case of this years’ XC world cup and world championship winner Nino Schurter, 172cm tall, riding a 27.5” Scott, speaks by itself.

Since the previous situations with the Equalizer 2 rear shock, we will soon be testing one of the two bikes for a longer period in order to test the durability and reliability of the Nude 2.

Here you can find the specs regarding the various Genius models

The first ride at dawn, picture by Christoph Bayer