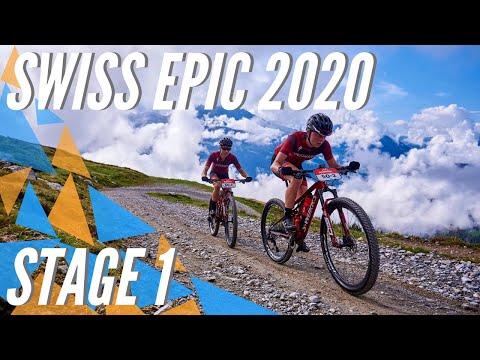 Graubünden resident, Nino Schurter and his SCOTT-SRAM teammate Lars Forster rode to a dominant stage victory on the opening stage of the 2020 Swiss Epic. The 60-kilometre route, which started and finished in Laax, provided ample technical trails for the Swiss pair to exert their dominance on.

The 2020 Swiss Epic got underway in Laax on Tuesday, 18 August. Graubünden, the race’s host canton and title sponsor, could not have hoped for a better result; as Nino Schurter, a native of the region, won the opening stage. Schurter and his SCOTT-SRAM teammate, Lars Forster, were in a class of their own once the trails headed downhill. They had to battle for the right to dominate the singletracks, however. Centurion Vaude took the fight to the race favourites on the first major climb of the race. Ascending from around 1 200 metres above sea level to 2 456 metres; the climb to the Crap Masegn ski station came too early in the stage to be decisive. Daniel Geismayr and Ben Zwiehoff did their utmost to make it so, though. 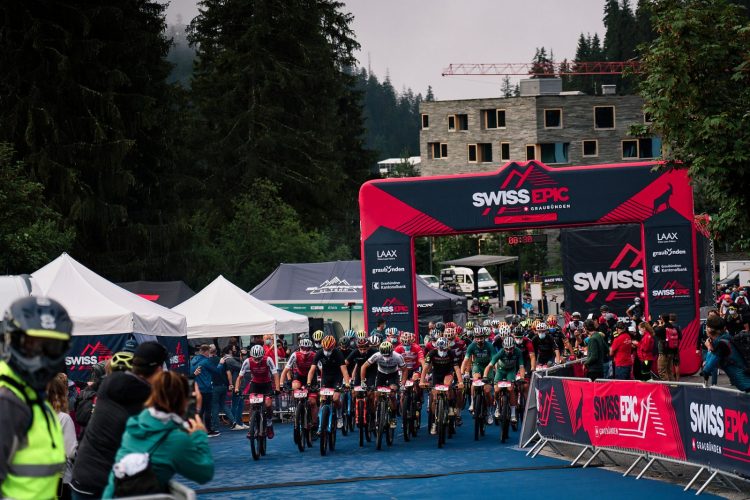 At the summit, the Centurion Vaude pair held a 34 second lead over the chase group. On the technical descent across the Segnas Plateau, past the Vorab Glacier and the Tectonic Arena Sardona, they quickly lost time and eventually the race lead. Despite Geismayr and Zwiehoff’s best efforts, Schurter and Forster were simply faster whenever the trails got rooty or rocky. “The first big climb was tough” Schurter allowed, confessing to not being able to match Geismayr and Zwiehoff. “We knew we weren’t going to be the strongest on the long climbs. So, we paced ourselves as best we could and made an effort to lead the chase group into the first downhill.” There they could exploit Schurter’s local knowledge.

The multiple World Champion resides just 25 kilometres from Laax in, Graubünden’s administrative capital, Chur. “Local knowledge was a big advantage today” the SCOTT-SRAM ace added. “I knew a lot of the trails. Not all of them, but enough to make a difference. We managed to take time out of our rivals on the technical downhills. The conditions were exceptionally tough, with snow-melt wetting the roots and stones in the natural trails, but that suited our strengths.” 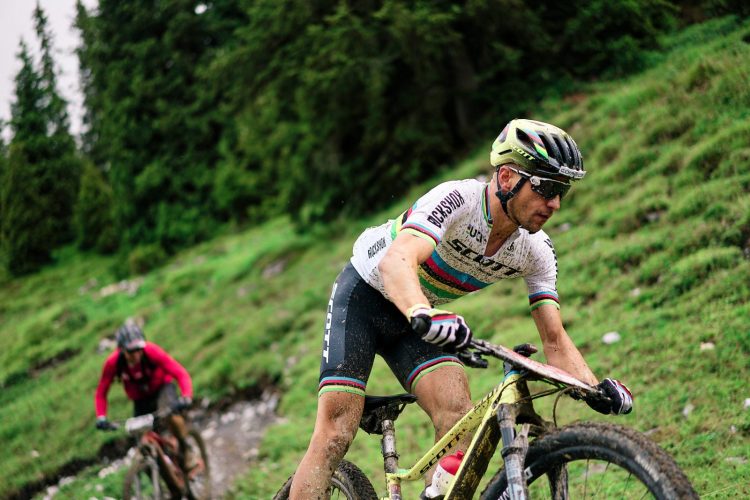 Having passed Centurion Vaude after 24 kilometres of racing, Schurter and Forster went to work extending their lead. Geismayr and Zwiehoff, meanwhile, were soon caught and passed by the Trek-Pirelli 1 team, of Fabian Rabensteiner and Samuele Porro. The quartet spent the majority of the final 30 kilometres battling each other for second position, while simultaneously attempting to limit their losses to SCOTT-SRAM. There was no stopping Schurter and Forster, however. SCOTT-SRAM crossed the line in a time of 3 hours, 1 minute and 9 seconds.

Behind them Trek-Pirelli edged out Centurion Vaude, claiming second by just 6 seconds. The Italian squad, who boast one of the defending champions, Rabensteiner, in their line-up, finished 1 minute and 19 seconds down on the stage winners. In a surprise result, the BULLS Youngsters were the fourth team across the line. Martin Frey and Simon Schneller were 7 minutes and 10 seconds slower than SCOTT-SRAM, but 1 minute and 30 seconds ahead of the more fancied BULLS Heroes. Splitting the two BULLS teams was the Future Cycling Northwave team, of Kristian Hynek and Martin Stošek, in fifth. On Wednesday, 19 August, Stage 2 of the 2020 Swiss Epic takes the race from Laax to Arosa. The route skirts one of Graubünden’s most iconic landmarks, the Rhine Gorge. 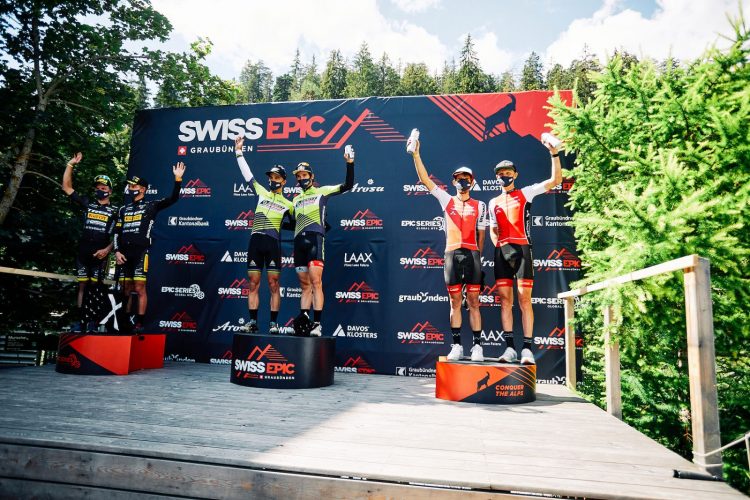 It is a day backloaded with climbing, gaining 2 600 metres in elevation in 75 kilometres. The heartening fact for Schurter and Forster’s rivals comes in the form of the final climb only reaching its summit 5 kilometres from the finish line. The lack of technical singletracks between Rot Tritt, at 2 007 metres above sea level, and Arosa should nullify SCOTT-SRAM’s formidable technical advantage. To see if Trek-Pirelli and Centurion Vaude can leverage their advantage on long climbs, on the second stage of the Swiss Epic, tune in from 08:00 (Central European Summer Time/GMT +2). Visit www.swiss-epic.com to follow the action live. 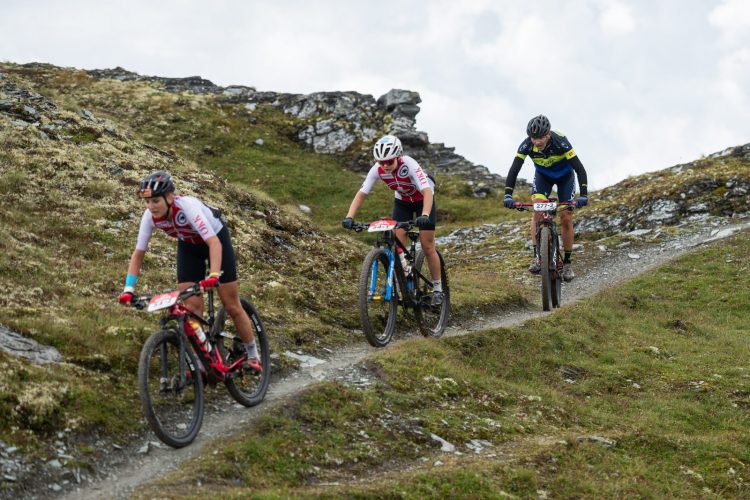 The Queen of mountain bike stage racing, Annika Langvad once again showed her class as she and Haley Batten stormed to victory on the opening stage of the 2020 Swiss Epic. The Specialized – Racing pair controlled throughout, capitalising on a fall by Sina Frei to build-up an 8-minute advantage on the 60-kilometre stage, which started and finished in Laax.

The experience of Annika Langvad was clear on the opening stage of the 2020 Swiss Epic, in Laax, on Tuesday, 18 August. The undisputed queen of mountain bike stage racing kept her young partner, Haley Batten, calm; despite the Centurion Vaude Radon and Swiss Cycling Teams racing into an early lead. This allowed the Specialized – Racing pair to capitalise on a crash by Sina Frey and storm to a dominant stage victory. The introduction to the trails of Graubünden was a challenging one, in the seventh edition of the Swiss Epic. Leaving Laax, the route headed straight uphill, for a typically alpine climb to over 2 400 metres above sea level. 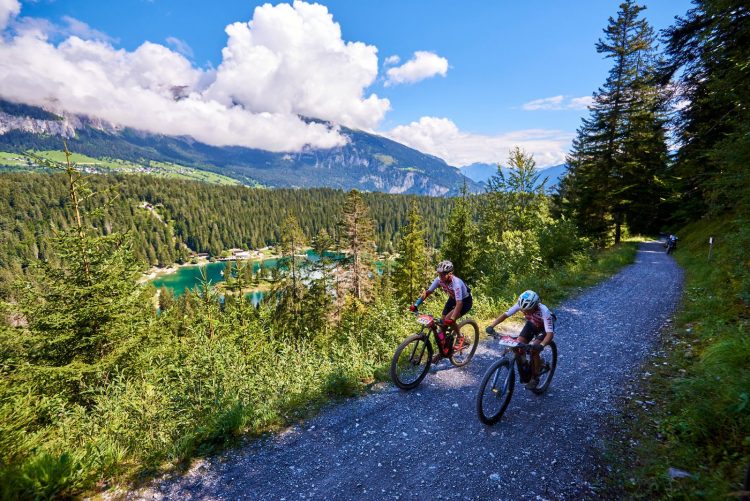 Once at altitude, the teams were tested and treated by a series of natural and mountain bike specific singletracks. These wound their way past iconic landmarks; like the Vorab Glacier and the Tectonic Arena Sardona. It was the trails that proved decisive on Stage 1, however, as the advantage teams managed to gain on the long climb were quickly whittled away in the singletrack descents. On the climb to the Queen of the Mountain point, at the Crap Masegn ski station, Centurion-Vaude Radon set a pace which none of the other women’s teams were willing to match.

Stefanie Dohrn and Elisabeth Brandau summited the climb with a 53 second lead over Frei and her Swiss Cycling teammate, Nicole Koller. Langvad and Batten, meanwhile, were 2 minutes and 39 seconds off the pace. The descent that followed shook up the standings almost immediately. Dohrn and Brandau lost their lead to Frei and Koller, before slipping further down the field and eventually finishing in fifth position. Once the young Swiss cross-country specialists were in the lead, one would have expected them to hang onto it. Especially given their technical proficiency. 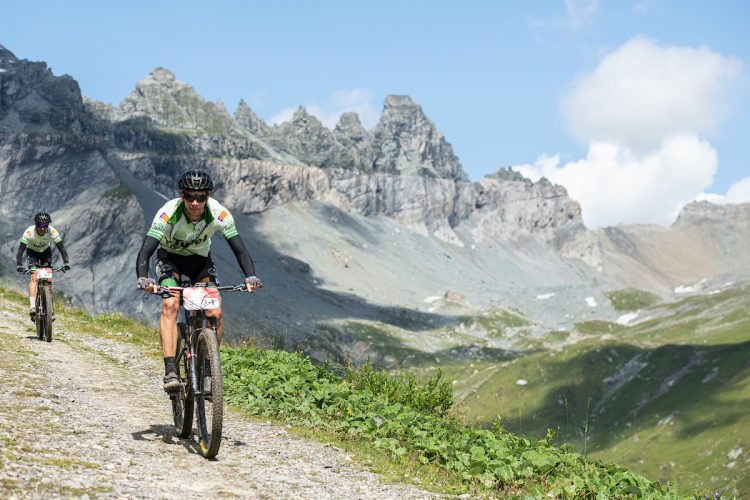 That was not to be however, as the BULLS e-bike pilot Stefan Sahm explained: “Conditions were really, really, tough today. The singletracks were very slippery and I saw a couple of crashes. It was challenging for everyone and helped split up the women’s field. Sina Frei fell on her hip and looked to be hurting mid-stage.”

Frei’s crash allowed Specialized – Racing to regain parity with the leaders. Soon the under 23 World Champion was struggling to keep up with Langvad and Batten, though. The gap then inexorably grew over the remaining kilometres, until the Danish/American combination held a commanding 8-minute advantage. “We really maximised our teamwork today” Langvad said, analysing their performance. “The more we got going, the more we rode ourselves into the race; into a flow with the course and into a flow as a team. Riding with Haley [Batten] was a pleasure. I must admit I even let out a few whoops while following her down the flow trail. That was so much fun.” 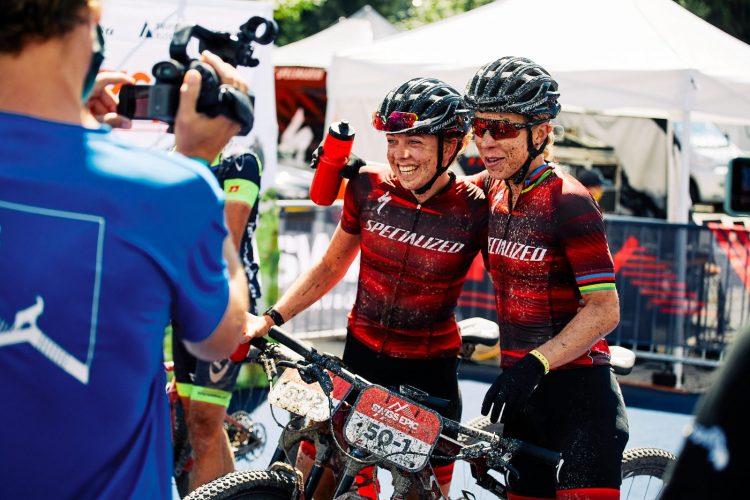 Fun is fast, is a well-used adage in mountain biking and that proved to be the case for Specialized – Racing on the day. Their stage win hands them an 8 minute and 2 second advantage over Swiss Cycling’s Frei and Koller. Nina Benz and Kim Ames finished the stage strongly, claiming the final podium place on the day. The jb Brunex Felt Factory Team were 9 minutes and 26 seconds behind the leaders. Langvad’s erstwhile Absa Cape Epic and Swiss Epic teammate, Ariane Lüthi, was fourth on the day; alongside Alice Pirard. The Andermatt Spur team were just 13 seconds off the podium places and remain a team to watch as the race unfolds. Dohrn and Brandau rounded out the top five; though their deficit of just over 13 minutes must be concerning given their strong start to the stage.

The Swiss Epic’s exploration of the scintillating trails of Graubünden continues on Stage 2, when the race moves from Laax to Arosa. Route highlights for the day include the spectacular Rhine Gorge and the Domleschg Valley. It is a course backloaded with climbing, gaining over 1 000 metres in elevation on the 20-kilometre climb from Chur to Rot Tritt. Given that the long climb was Langvad and Batten’s only weakness on Stage 1, the rest of the women’s field will be looking to put pressure on the Specialized – Racing pair late in the stage. To see if Frei, Koller, Benz, Ames, Lüthi, Pirard, Dohrn, Brandau and Co. are able to do just that, tune in to www.swiss-epic.com. The racing action starts at 08:00 (Central European Summer Time/GMT +2).