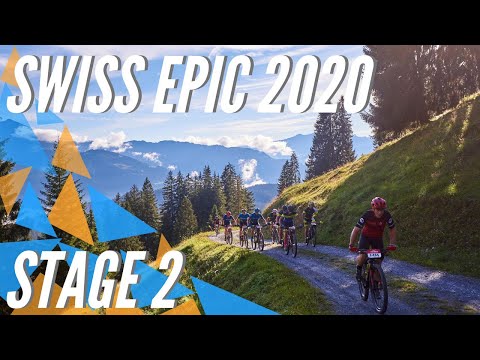 Kristian HYNEK and Martin STOŠEK during Stage 2 of the 2020 Swiss Epic from Laax to Arosa, Graubünden, Switzerland on 19 August 2020.

The second stage of the 2020 Swiss Epic took the teams from Laax, in an easterly direction, to Arosa; on Wednesday, 19 August. It was a day backloaded with climbing, which suited the strengths of the Czech pair, Kristian Hynek and Martin Stošek. The Future Cycling Northwave team claimed the stage honours and moved up one general classification position in the process. SCOTT-SRAM, however, did enough to extend their overall advantage over the rest of the elite men’s field.

Nino Schurter and Lars Forster started the stage like a team knowing they would be put on the defensive later in the day. The SCOTT-SRAM riders roared from the blocks, quickly establishing a 1-minute lead. In a unique turn of events, they were joined by Simon Andreassen, of Specialized Racing. The young Dane shadowed the leaders for much of the stage; wracking up time penalties and a warning from the race officials for exceeding the 2-minute separation rule, which should have kept him closer to his partner Jaroslav Kulhavý. 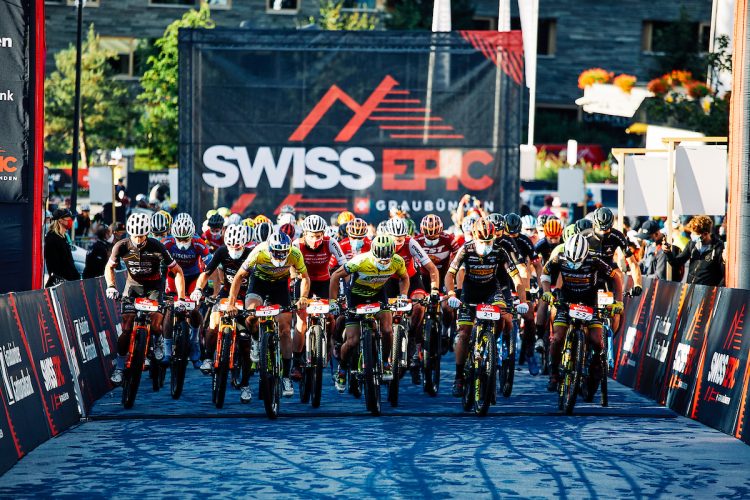 A large chase group formed behind Schurter and Forster; led in turns by Centurion Vaude, Future Cycling Northwave, BMC Fischer and the BULLS Heroes. Through collaboration, they were able to keep the deficit manageable and eventually reel SCOTT-SRAM in before the foot of the day’s major climb.

Passing Service Station 2, at the 51-kilometre mark, four teams were in direct contention for stage honours. They were Centurion Vaude, SCOTT-SRAM, Future Cycling Northwave and BULLS Heroes. The BULLS Youngsters and Maloja Pushbikers were 30 seconds off the pace, while Trek Pirelli 1 was a further 8 seconds back.
On the 20-kilometre-long climb, that gained 1 000 metres from Chur to Rot Tritt, Daniel Geismayr initially set the pace. The Austrian’s efforts looked to be putting pressure on Forster in particular, but the Swiss rider resolutely clung to Ben Zwiehoff’s wheel.

The non-technical nature of the descent from Rot Tritt to Arosa aided Hynek and Stošek. The Czech team maintained the advantage, which they held at the summit, over SCOTT-SRAM and Centurion Vaude. “Sure, after yesterday when we were very frustrated, it feels good to win today” Hynek confessed, after crossing the finish line. “Yesterday we were feeling good on the climbs but lost minutes and minutes in the technical downhills. Today was much, much, better. We expected the scenario of how the stage unfolded. And being able to plan for it paid off.”

Future Cycling Northwave’s winning time of 3 hours, 17 minutes and 3 seconds was 36 seconds faster than SCOTT-SRAM’s time. Centurion Vaude was third, 44 seconds down on the stage winners. The BULLS Heroes and Trek Pirelli 1 rounded out the top 5. The stage results mean that, after 2 days of racing in Graubünden, Schurter and Forster lead the race by 1 minute and 33 seconds. Geismayr and Zwiehoff are second, for Centurion Vaude, while Trek Pirelli are third, 5 minutes and 32 seconds down.
On Thursday, the teams are treated to a short, action-packed, stage which starts and finishes in Arosa. In just 50 kilometres the route takes in 1 900 metres of climbing. The course is one that should suit SCOTT-SRAM better than their rivals, as it is packed with singletrack descents; though, the Hörnli Trail and the other purpose-built mountain bike flow trails should nullify that advantage somewhat. It is in the natural trails, trodden in the alpine slopes by the hooves of Swiss cattle, that Schurter and Forster have proved truly peerless. 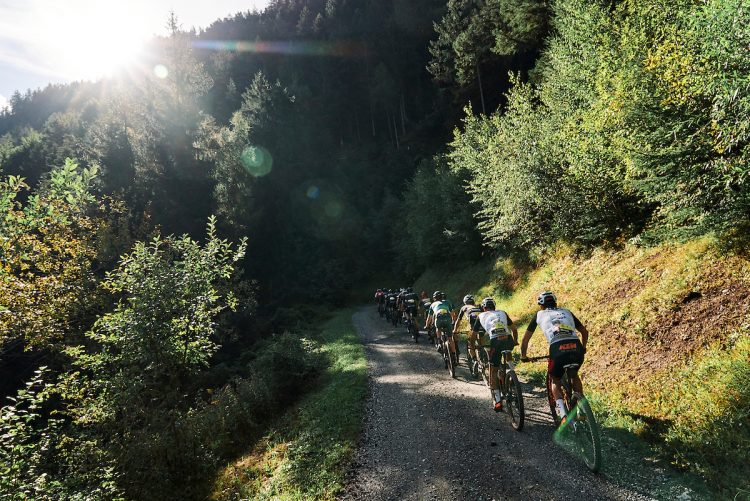 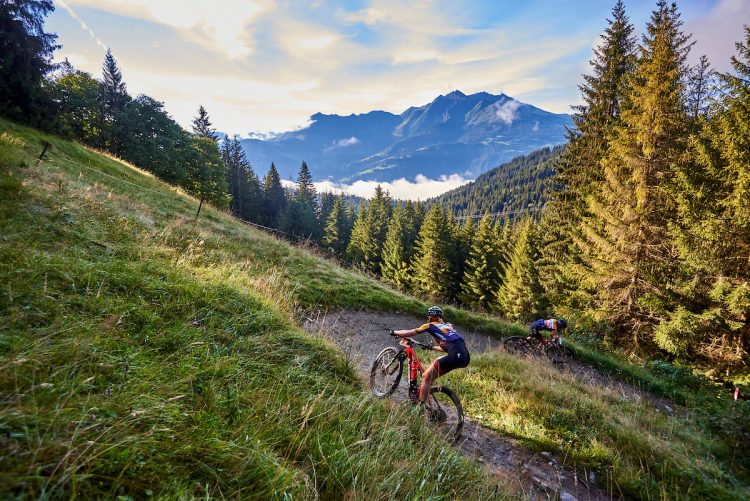 Annika LANGVAD,Haley BATTEN during Stage 2 of the 2020 Swiss Epic from Laax to Arosa, Graubünden, Switzerland on 19 August 2020. Photo by Marius Holler. PLEASE ENSURE THE APPROPRIATE CREDIT IS GIVEN TO THE PHOTOGRAPHER.
Another mature performance by Haley Batten saw her and her Specialized – Racing teammate, Annika Langvad, extend their Swiss Epic overall lead; on Wednesday, 19 August. The pair exerted their dominance on the singletracks in the first 50 kilometres of the stage and then Batten gritted her teeth on the 20-kilometre-long main climb. By digging deep, she aided Langvad in the bid to hold off the fast-finishing Centurion Vaude Radon team and win Stage 2.

The stage started in Laax and traced the Rhine Gorge in a singletrack-filled opening couple of hours. In that terrain, as they did on Stage 1, Langvad and Batten proved unstoppable. They were however joined by Nicole Koller. Koller’s partner Sina Frei withdrew shortly after the start, due to a knee injury she sustained in a fall the day before. This left Koller to race solo. The Swiss rider was happy to showcase her technical skills alongside the women in the orange leaders’ jerseys, but she could also not interfere with the way the race unfolded. So, she had to follow rather than set the pace.

By the 20-kilometre mark, Specialized – Racing’s advantage was 1 minute, over the day’s surprise package the Maloja Pushbikers. Linda Indergand and Karla Stepanova had struggled on the opening day but Stage 2 proved more to their liking. Nonetheless, they, like Centurion Vaude Radon and Andermatt Spur behind them, were unable to close the gap to Langvad and Batten.
At the foot of the day’s major climb, which ascended form Chur to the highest point of the day at 2 007 metres, Specialized – Racing held a near 5-minute advantage on Stefanie Dohrn and Elisabeth Brandau. The 20-kilometre-long pass gained nearly 1 000 metres in elevation, which was tipped more in the favour of the chasers by the fact that the first half was on asphalt. Centurion Vaude Radon passed Indergand and Stepanova within the first 5 kilometres of the ascent. Then went to work reducing the lead of Langvad and Batten. 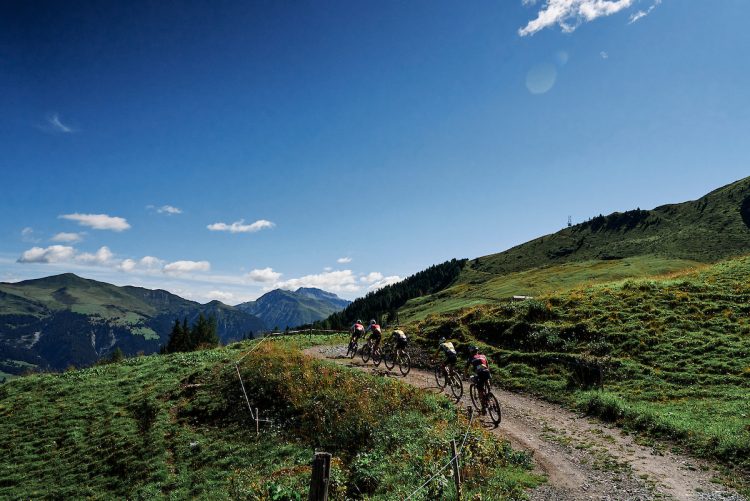 In total, they managed to knock the best part of 3 minutes off Specialized – Racing’s advantage. It was not enough to bring them in sight of the race leaders, however. Langvad and Batten could thus descend, without significant pressure from the summit, at Rot Tritt, to the finish line, in Arosa. By the time they crossed the line they had extended their lead once more.

Specialized – Racing’s time of 4 hours, 11 minutes and 17 seconds was 2 minutes and 21 seconds faster than that of Centurion Vaude Radon. Despite fading over the final kilometres of the climb, Maloja Pushbikers hung on to finish third, 8 minutes and 7 seconds down. Andermatt Spur were fourth and the jb BRUNEX Felt Factory 2 team rounded out the top 5.

After two stages of racing, in the beautiful mountains and valleys of Graubünden, Langvad and Batten hold a 15 minute and 23 second lead, on the general classification. Dohrn and Brandau are second, 3 minutes and 18 seconds ahead of Ariane Lüthi and Alice Pirard in third. Their third position on the stage moved Indergand and Stepanova up to fourth, while the jb Brunex Felt Factory Team drop to fifth after a disappointing day for Nina Benz and Kim Ames.
Thursday’s Stage 3 offers the opportunity for all the Elite women to reshape the general classification with strong performances.

The compact, 50-kilometre, course is made up of two loops, which pass through the Arosa race village, in a challenging. Steep climbs, including one to the highest point of the race at 2 614 metres above sea level, are followed by long singletrack descents. If anyone cracks on the climb to Gredigs Fürggli they could lose a significant amount of time.

The battle for the women’s category title in the 2020 Swiss Epic is thus far from over. Tune in tomorrow to see the racing action play out. The stage starts at 09:00 (Central European Summer Time/GMT +2).