Andreas Seewald and Martin Stošek (Canyon Northwave MTB) won the 92km Stage 1 of the Absa Cape Epic with a controlled, well-paced ride from start to finish and claimed the Men’s category leader jerseys in the process.

Riding smoothly and serenely throughout the stage, Seewald and Stošek were comfortable winners on a day when all the drama happened behind them.

Living up to their Prologue promise, Speed Company Racing’s Georg Egger and Lukas Baum started brightly on the stage, as did SCOTT-SRAM’s Nino Schurter and Lars Forster.

The nature of the race changed significantly just before the stage’s main climb, where Schurter suffered his second rear tyre puncture in as many days. Once again, the team was unsuccessful with their repairs and eventually swapped out the rear wheel with a backup team. “It’s hard to motivate yourself when you fall so far behind. It’s very draining mentally,” said Schurter, “But we did what we could and we will ride hard on Stage 2.”

At the same time, Matt Beers was struggling with stomach issues, unable to keep any food down. The yellow jersey team slowly moved further down the field. “It was a real race out there,” said Christopher Blevins. “That climb in the middle made it a tough day. Matt is such a champion for pushing on.” 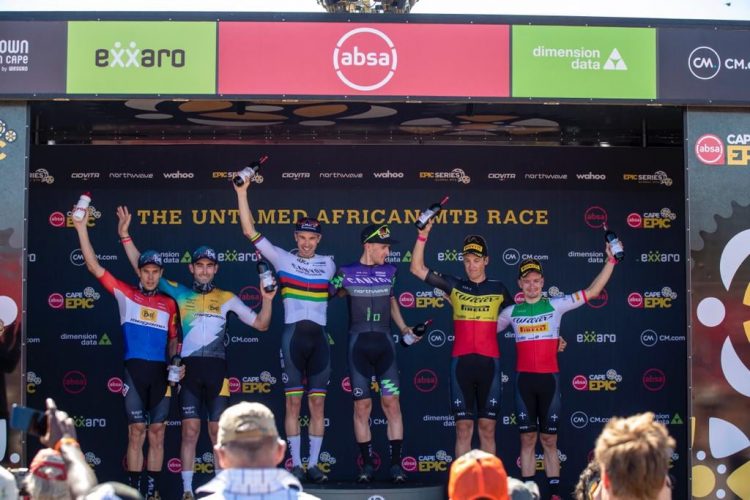 Beers added, “I’m not sure what happened. My stomach was giving me issues all day and I couldn’t keep any food down. It was just one of those days. There was no option to quit; I just need to ride my way back into it from tomorrow.”

Seewald and Stošek had no such issues, with Seewald, in particular, looking every inch the Mountain Bike Marathon World Champion he is. The eventual winners took the stage by the scruff of the neck going up the Saddle Climb and never relinquished their lead, finishing the stage two-and-a-half minutes ahead of BUFF-MEGAMO.

“We had no real concrete plan to attack the big climb, it just worked out that way,” said Seewald. “We wanted to inflict some damage there, but we didn’t think we could get away from everyone. We thought we would go hard and then the rest of the riders would catch us later. But things went our way with some of the teams struggling with mechanicals. We got a bit lucky, but once we were in front we just kept pushing on to the finish. It feels good to take the stage.”

Martin Stošek said being in yellow is great, but added, “there is a lot of riding to come.”

BUFF-MEGAMO finished second on the stage and now sit second in the general classification, just over five minutes off the leaders.

“It was super hot, dry, and dusty out there,” said Hans Becking. “We knew we needed to get in front on the descents so we could actually see! It was very technical out there; it was a brutal Absa Cape Epic stage, not like last year where everything felt super smooth. Still, we had a good ride and we are very happy with second on the day and overall.”

With 123km to come on Stage 2, marathon man Andreas Seewald will be licking his lips at the prospect of a long ride to inflict further damage on the chasing pack. In turn, the chasers will have to pull out all the stops on the race from Lourensford Wine Estate to Greyton.

The CM.com Women’s category racing on Stage 1 of the Absa Cape Epic was like a ding-dong football match where both teams forget to defend, so frequently did the lead change hands on the day. After a thrilling day on the trails, NinetyOne-songo-Specialized (Sofía Gómez Villafane and Haley Batten) claimed the stage and moved into the overall lead, and in so doing secured the orange leader jerseys ahead of Stage 2.

Candice Lill and Mariske Strauss were first to go ahead on Stage 1 with an early attack in the first 5km, only to lose the lead to NinetyOne-songo-Specialized on the King’s Climb.

Gómez Villafane and Batten then moved into the lead until the stage’s main climb that was fittingly named in the end as most riders were out of the saddle near the top.

Lüthi and Wakefield were, at one stage, three minutes off the lead on Stage 1, then managed to race into a two-minute lead over NinetyOne-songo-Specialized. 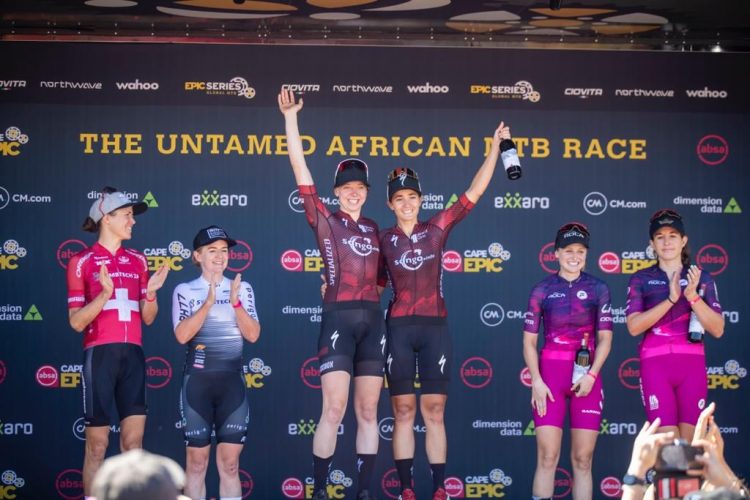 Incredibly, Gómez Villafane and Batten were able to rally once more, and eventually overtook Symbtech ZA, who were struggling with a flat tyre, racing away to claim the stage.

Symbtech ZA finished second (moving into second in the General Classification at the same time), chasing all the way, with Lill and Strauss taking third spot (and third in the GC) and extending their Absa African Women’s jersey lead.

BMC MTB Racing (Robyn de Groot and Pauline Ferrand-Prévot), the Prologue winners and overnight leaders in the CM.com Women’s category, struggled on the day, finishing fourth and relinquishing their orange jerseys to NinetyOne-songo-Specialized. “I just wasn’t feeling very well on the day,” said a subdued Ferrand-Prévot.

American rider Haley Batten, on the other hand, was thrilled with the team’s performance, calling the race ‘truly epic’.

“Oh my gosh, that was such an intense race. You want a tight race rather than winning too easily, but that was so close. We got a bit lucky with Symbtech ZA struggling with mechanicals. But that happens. That’s the kind of racing that makes an event exciting. Ariane and Amy really put on a great show; when they came past us on that steep climb I said to myself ‘it’s game on now’. I had to mentally dig in to chase back.”

Batten’s partner, Argentinian Sofía Gómez Villafane, took some strain on the Saddle Climb but was able to regroup for a strong finish. “That was an incredible race. When Ariane and Amy overtook us, they were flying. I knew it was going to be tough after that and had to just take it step-by-step. Haley was such a good partner today – she reminded me to eat and drink, coaxing me home all the way.”

Both riders admitted they were happy to be finished. “Man, that was a long final 10km,” said Batten. “It just went on and on. I forgot how long 10km can be.” Gómez Villafane echoed Batten’s sentiments. “At 2km to go, I thought ‘how can it still be 2km. It’s so long’. That was an exceptionally hard day of racing.”

Although missing out on the top spot after riding strongly, Wakefield and Luthi were in high spirits after crossing the line. “Today we went out with a clear strategy,” said Wakefield. “Ariane was in charge of the pacing; she said we must just watch the watts and focus on our own pace. It worked so well because soon we started catching and passing teams. On the Saddle Climb, we pulled away and just kept riding at our rhythm.”

Unfortunately for the popular pair, Lüthi punctured soon after the climb. Neither of the riders could find the exact spot on the tyre and had to repeatedly stop to inflate. “I think I just had heavy legs on the bike and was too heavy going over some sharp rocks. It happens. That’s racing. We kept cool and rode consistently to the end. You can’t get flustered with one puncture. We just focused on what we had to do and made it home with consistent riding. There’s still a long way to go. We’re in pretty good shape.”

Stage 2 sees the teams leaving Lourensford Wine Estate for Elandskloof Farm Cottages, Greyton, travelling 123km in the process out of Somerset West and through Grabouw before reaching their final destination. Another tactical battle is certainly on the cards.