After testing seven 27.5 trail bikes, now it’s the time for the 29ers to have their voice be heard. To see how this test was facilitated, you can refer to that article’s main introduction. The location is the same one: the awesome coastal trails of Punta Ala in Tuscany, Italy.

The bikes have been ridden “out of the box”, i.e. how the companies sent them to us. They all knew this was going to be a test where climbing performance is weighted as heavily as the downhills, and each of them sent us what they think would be the better fit, including the Scott Genius Plus (instead of the Genius 29).

The core of this article is the scoring you can find at the bottom. So don’t miss that and don’t get too grumpy if your bike didn’t win the comparative test. After all, it all depends on your riding style, local terrain and preferences in general. 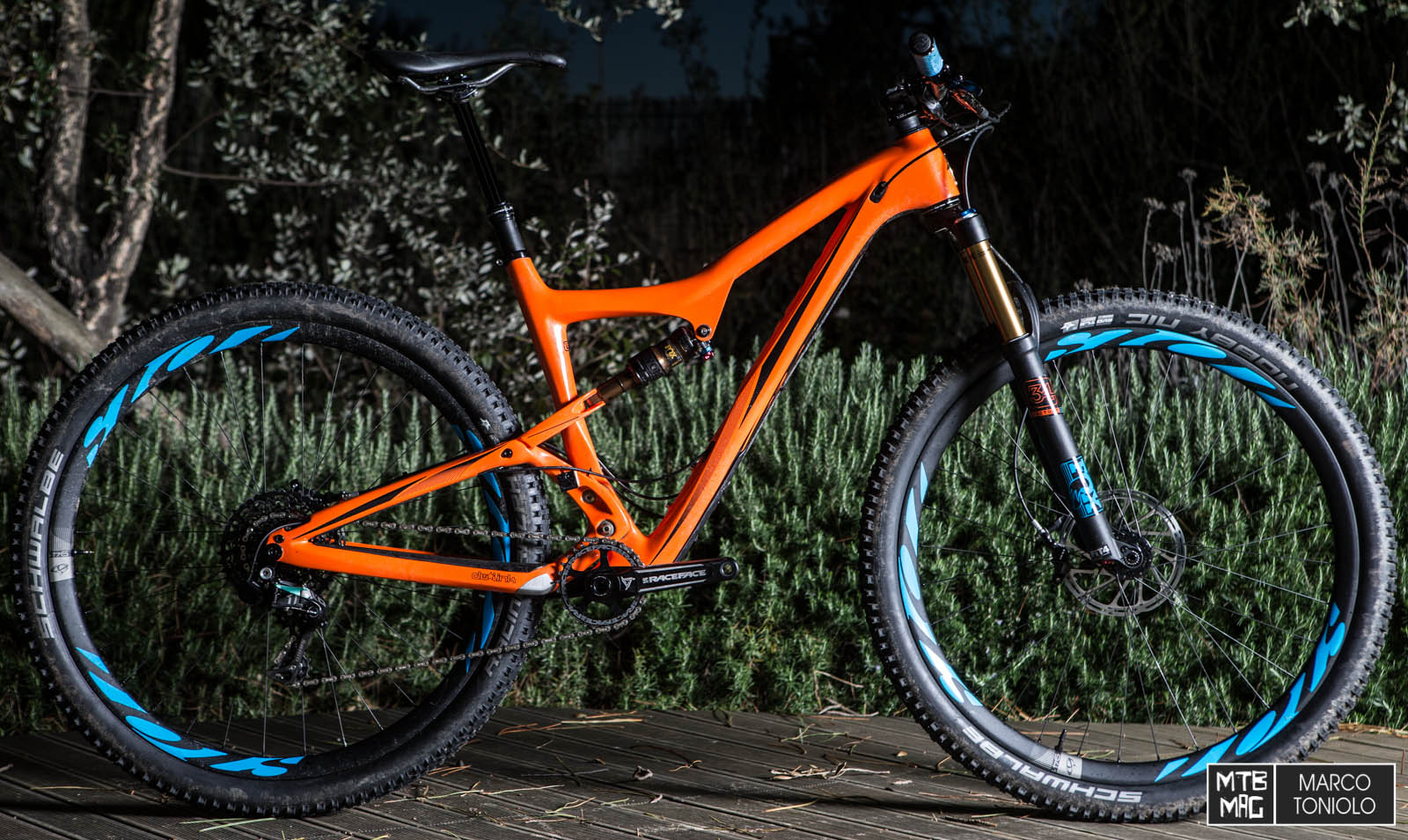 This is one of the testers’ favourite bikes, both for the well thought and high level specs (quite pricey) and obviously the performance on the trail. The Ripley is very efficient in both easy and technical uphills, due to the perfect DW Link rear suspension.  It’s super fast in acceleration, because of its overall light weight and snappy carbon wheels.

Also in both the fast and the twisty downhills this bike is very easy to steer, but when the trails become technical, not all testers were of the same opinion: some liked its reactivity saying that “it needs some skills to be ridden fast when it gets rough”, others thought it was a little more nervous than other bikes in the testing pack. At the end of the day everybody agreed the Ripley has a strong and unique personality which is hard to resist. 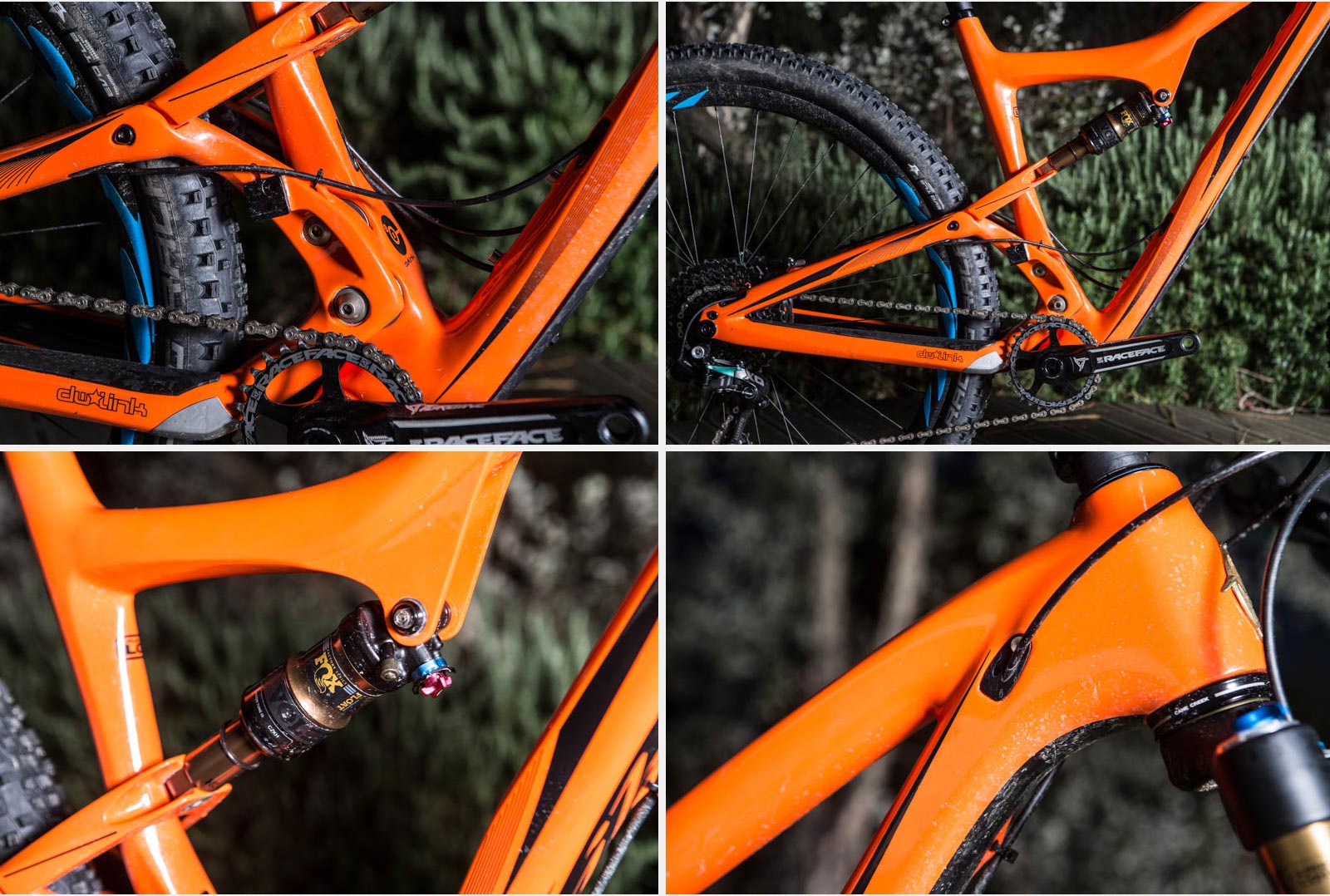 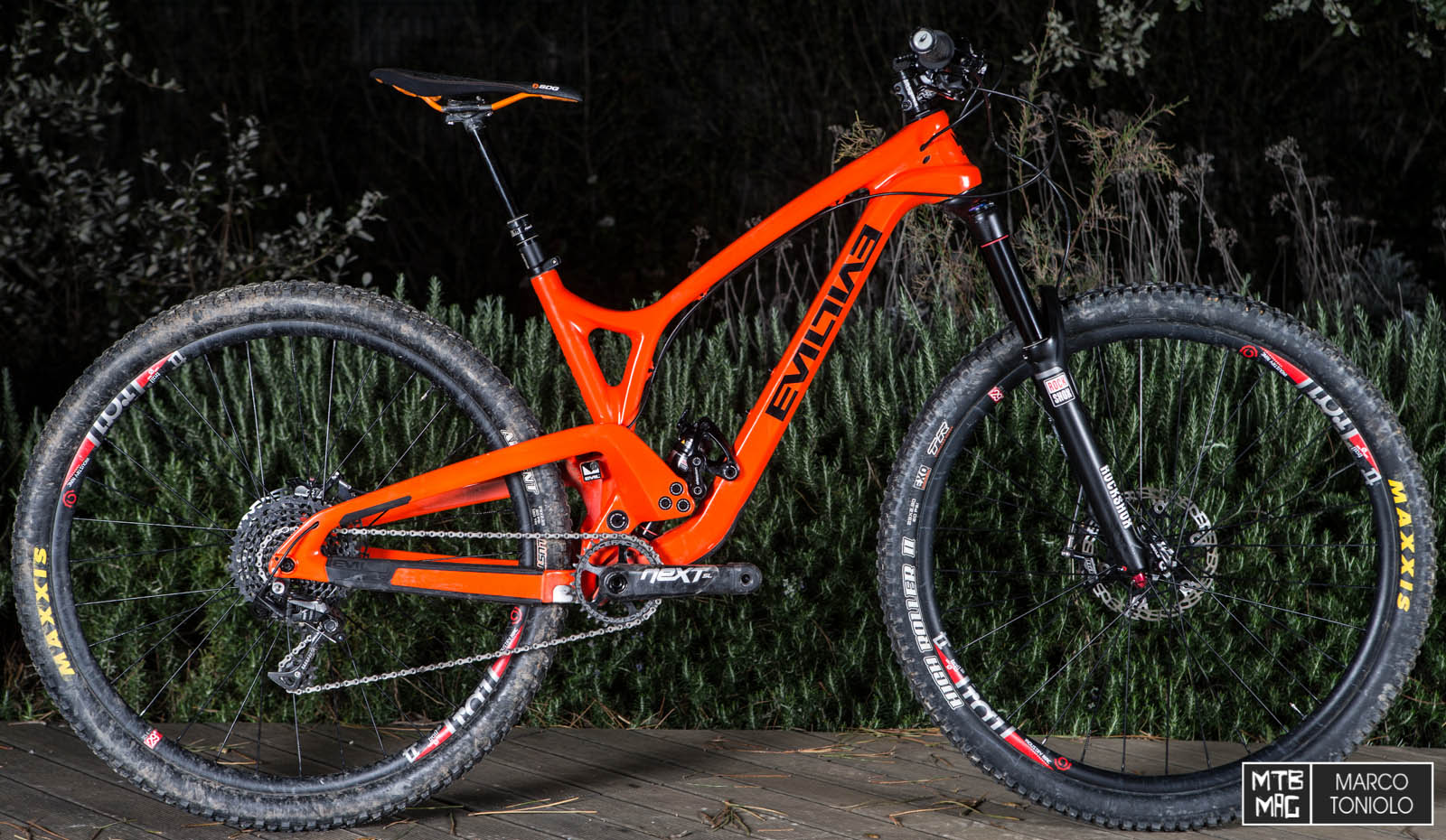 If you have read our single review, you would have expected the Evil The Following to perform better in our comparative. The main problem is that the Italian distributor sent us the bike with a140mm fork and Evil recommends either 120mm or 130mm – with this test, the bikes are scored as they were delivered to us.

Anyhow, with 140mm up front, the climbing position is too slack (even with the rear suspension in the “high” position) and it was hard to keep the front wheel on the ground on the technical uphills. Should you choose a140mm fork, Evil offer +/- 1º & 2º headset cups to correct the head angle but we would recommend 120mm instead. This, and 30% of sag required by the rear suspension to work at its best, are the reasons for the low scores in the uphill.

In the downhills the suspension is really smooth and plush, the bike is very stable and asking for more speed, but the reactivity in the corners and the acceleration when pedaling are not the best due, again, to the slack riding position. The bike gives lots of confidence in the technical and rocky downhills.  Here is the link to a comprehensive review from our English pages where the bike was ridden with 120 & 130mm forks featuring both 46 & 51mm offsets. 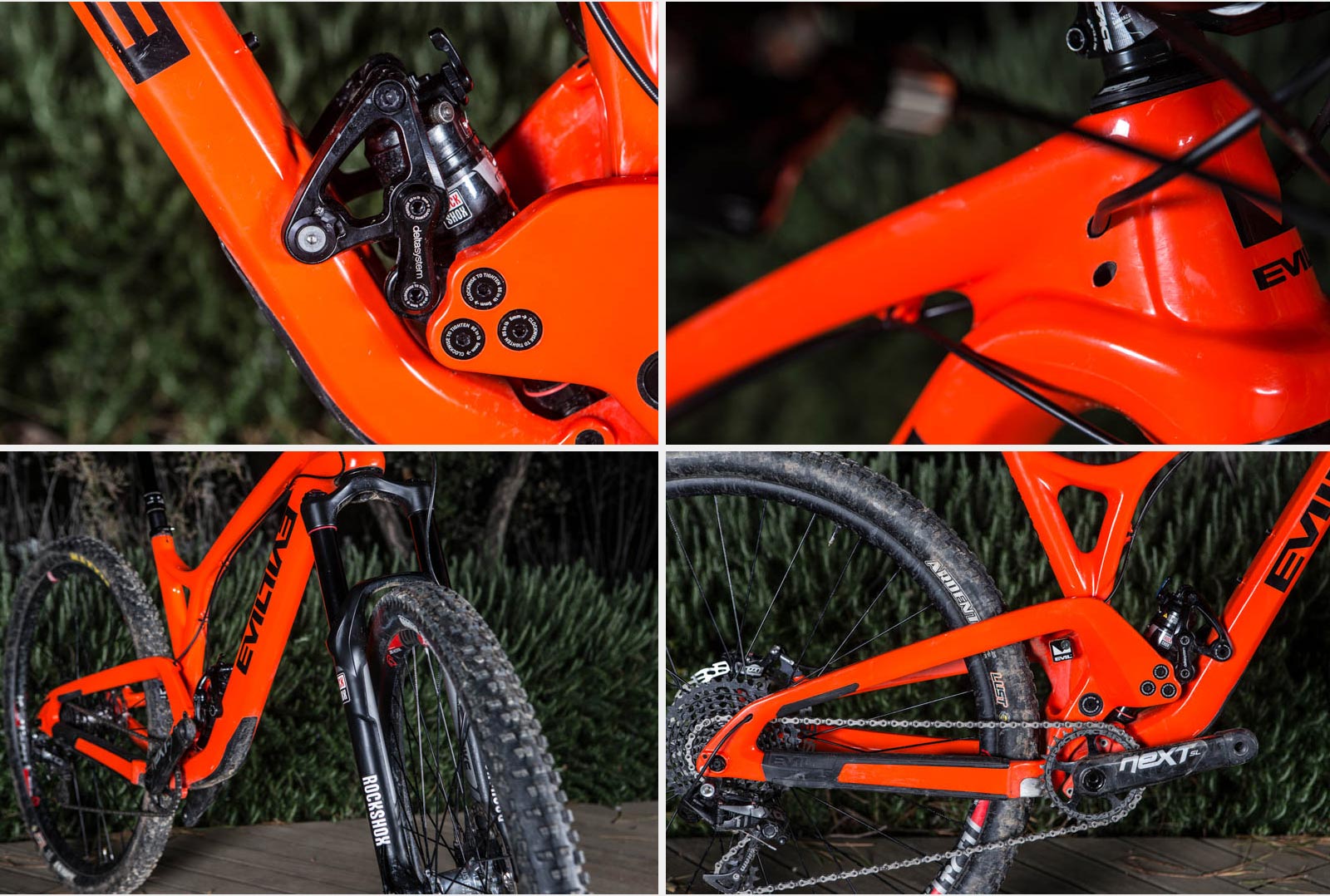 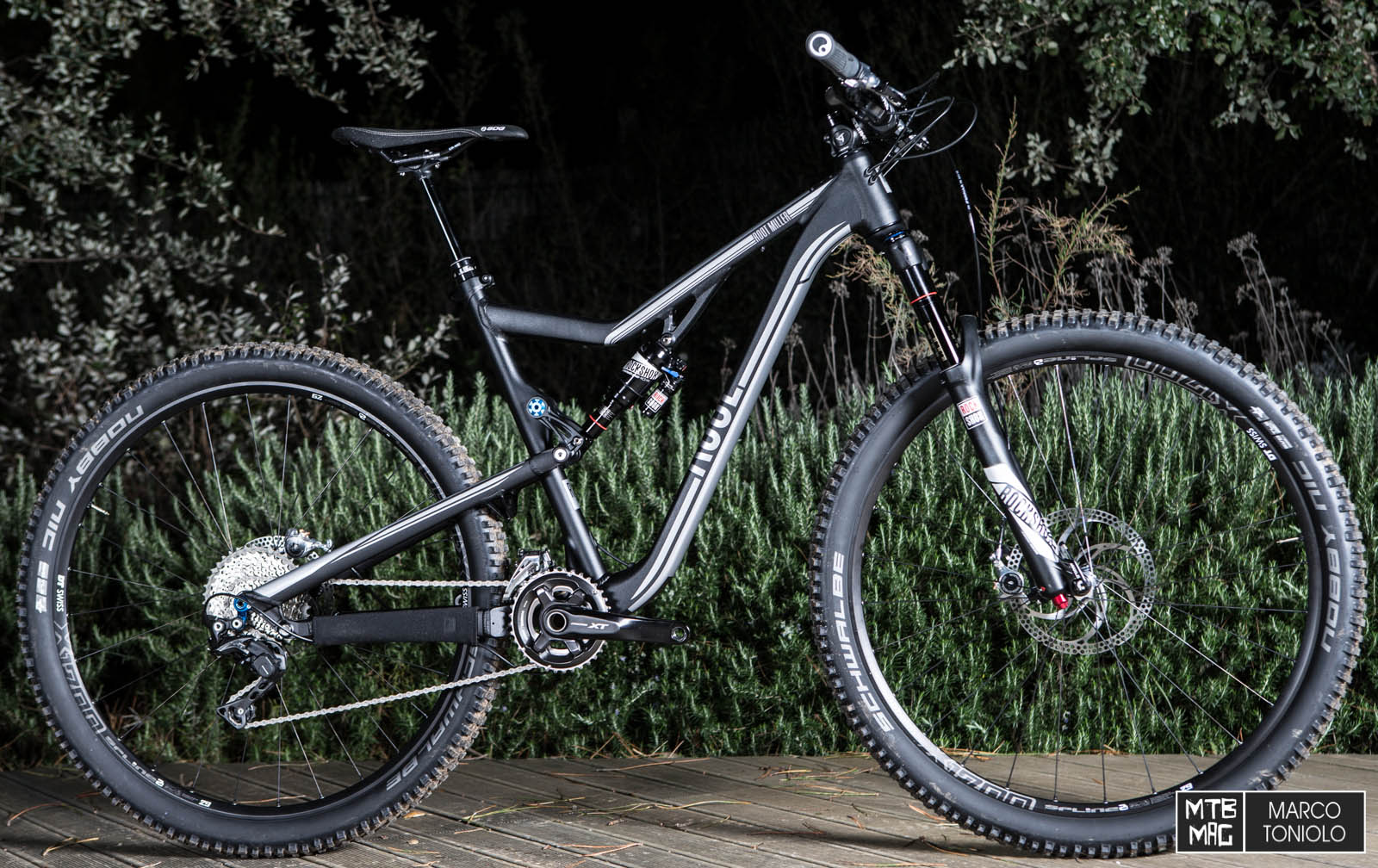 This is the only aluminum frame in the test and the only bike, other than the Trek Fuel EX, to have a 2x drivetrain. The build is well thought and of high level, despite its low price. It has to be said that Rose is a online-only brand, like Canyon and YT.

The testers liked the central riding position, though the relatively high weight influenced the score on the easy uphills. The steep effective seat angle, the long rear triangle and the composed rear suspension are of great help on the technical climbs: the Root Miller performs even better than lighter bikes in the test. On the other hand, in the downhills we liked the Rose on steep and technical sections, while on fast and windy trails it is one of the less agile bikes.

Together with the Santa Cruz Hightower, the Root Miller is one of the rigs that is more oriented towards the technical downhills, therefore less an allrounder than the average bike in this test. 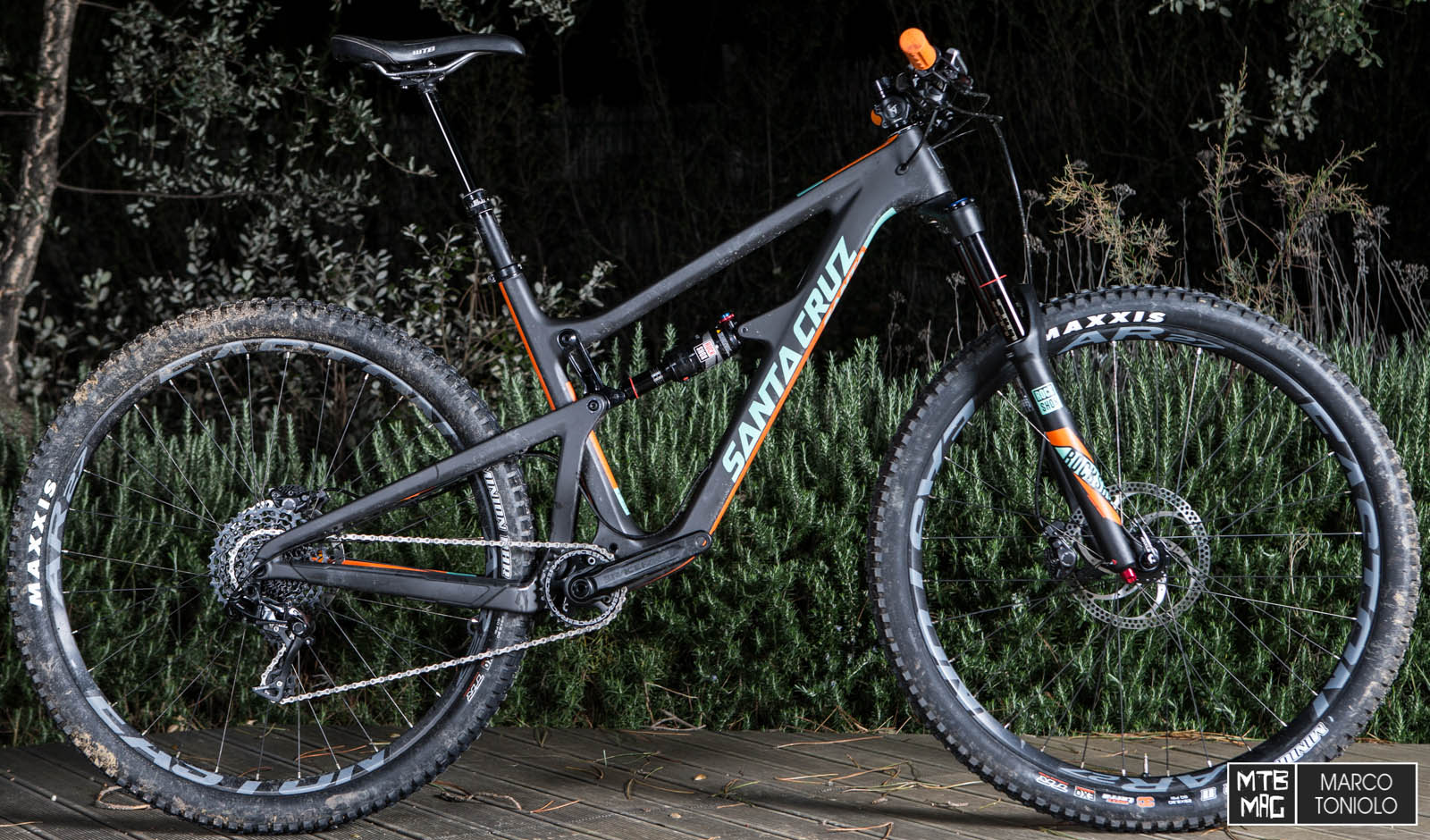 Santa Cruz sent us the new Hightower in its C version, the heavier of the two frame options. The bike is the heaviest of the comparative and it’s quite pricey given its specs.

It climbs well, but it’s in the downhills that the testers could find the real strengths of this bike, especially on the fast and technical sections, where it outperforms what you would expect from a trail bike, leaning more towards the enduro side of things. The rear suspension is very sensitive and with a nearly perfect rate curve yeilding just the right amount of progression. Some testers thought the Hightower doesn’t fit well in the “trail bikes” category, others liked the possibility to charge the downhills with a bike that performs well also on long climbs.

It’s important to note that the Hightower clears and accepts 27.5+ wheelsystems, but needs specific wheels and tires to be run this way. 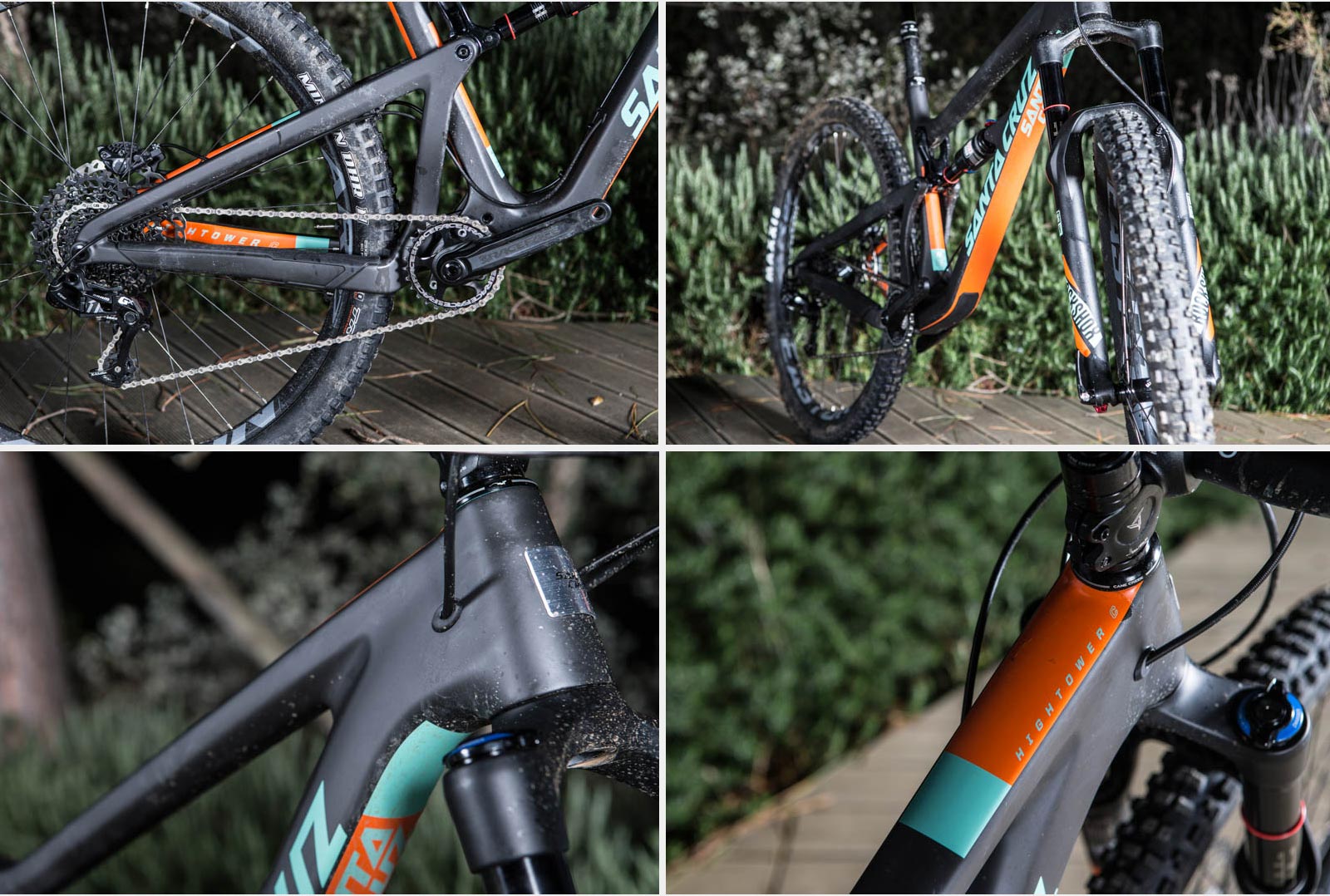 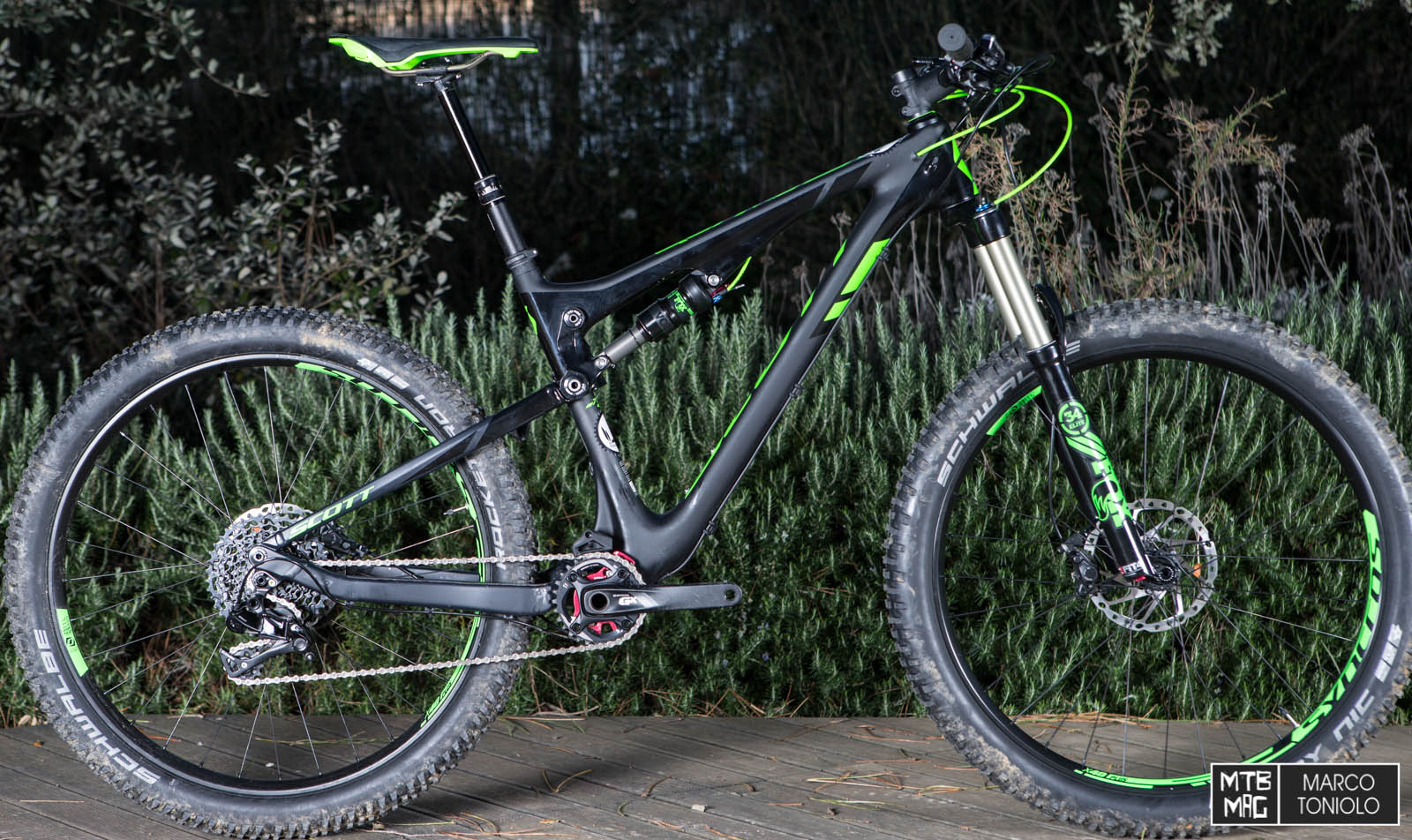 The Scott Genius 710+ is the only Plus bike in the group, and it has to be said this was a specific choice made by Scott. The same bike, with different wheels, becomes a 29er, but the Swiss brand preferred to send it in to us as the Plus version.

The remote suspension control really makes a difference, while the stretched out pedaling position and the cable routing under the bottom bracket didn’t convince the testers. The riding performance confirms what we have already written about the Plus format: lots of traction and grip in technical sections, both uphill and downhill, but a low reactivity and steering precision compared to the other competitors in the review. That means a lower score in the allround category, but don’t be fooled by the final score: if you are a beginner/novice looking for controlled and safe riding, this may be your bike of choice. 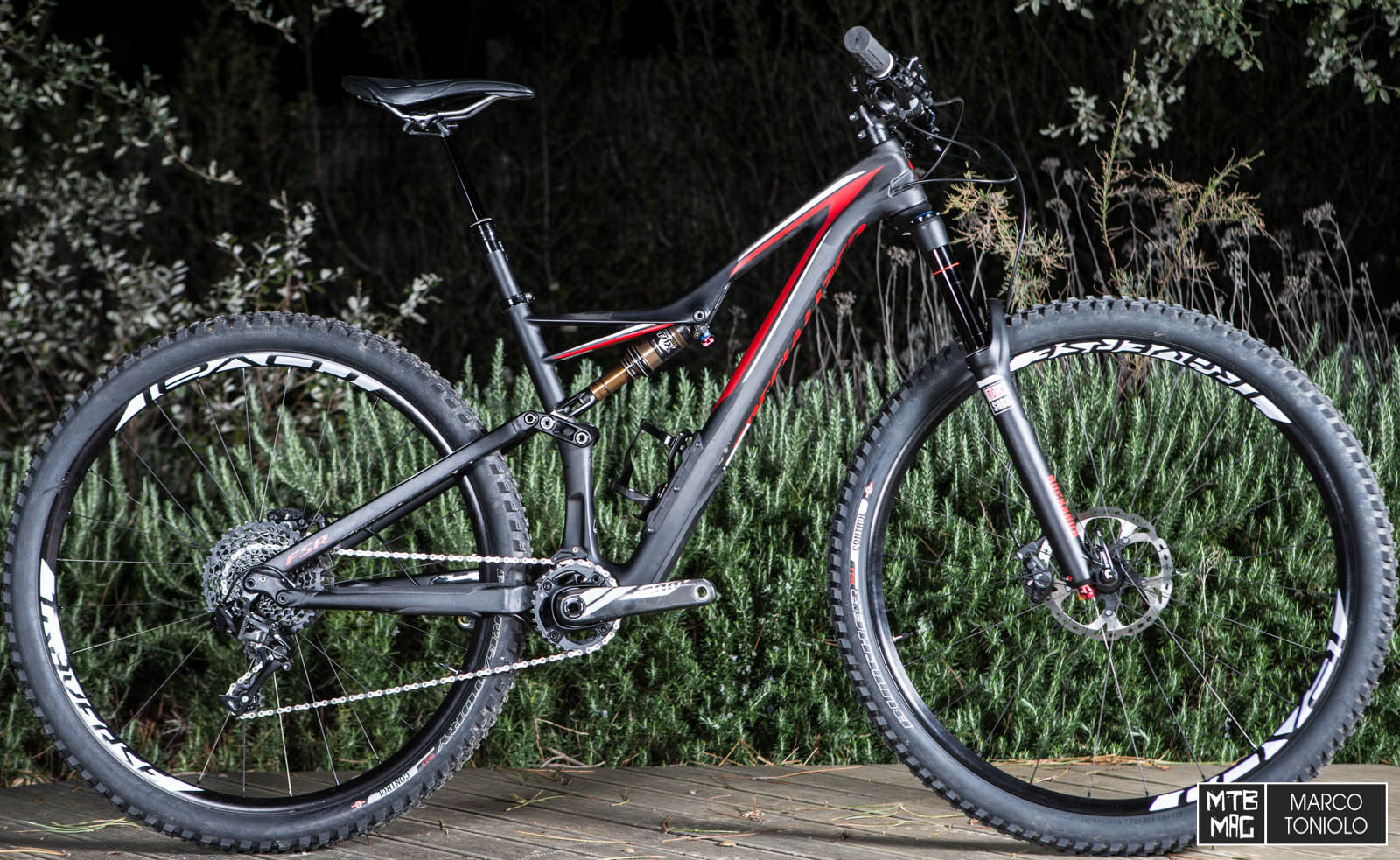 The winner. Allround qualities and a “state of the art” frame for trail riding are the factors that earned the Specialized Stumpjumper FSR the win. Basically the incredible attention to detail convinced the testers, from the cockpit to the SWAT system, a great idea for the classic after work rides where you don’t need a riding pack.

The bike has a unique feeling “out of the box – on the saddle – feel comfortable” in every situation, uphill as well as downhill. A kind of an “easy” bike, it’s not the best in every category, but its consistency in top scoring brings the win. It’s not as reactive as the Ripley and doesn’t quite provide the same level of confidence on the downhills as the Hightower or the Root Miller, but every other aspect of riding is better than each of them.

If you really are searching for something to grip about on this bike, maybe you can find it in the high release speed of the dropper post and in the tricky position of the autosag valve.  Those are small matters in the grand scheme of things though. “On a 5.000 Euro bike I expect a perfect cockpit”. These are the words of one of the testers commenting the usual fitting problem of a 2x Shimano drivetrain and the Rock Shox Reverb remote control. The same problem we found on the Canyon Spectral 27.5 indeed. This detail probably costs the Trek Fuel EX the second place in the overall ranking.

Its riding performance amazed all the testers: very efficient in the uphills, a lot of traction in the downhills. This is one of the most fun, agile and reactive bikes in winding and fast descents, while in technical terrain, the short travel fork and the relatively steep geometry has the Fuel EX dancing on the limit. Still, the Fuel EX is second only to the Stumpjumper in the allround performance and one of the favourite bikes amongst testers. The ABP rear suspension is simply amazing in the downhills, pedals well and is 100% neutral under braking forces. In the table below you can find the average of the single scores given by the testers, not yet multiplied by the “trail factors”. The final results (green) take the factors into account. The maximum score is 10.

If you’d like to hit the trails we have been riding during the past week, remember that the Punta Ala Camping Resort is open as of March 11th.

We would like to thank all the people who made this review possible: Thomas, Roberto, Maria Luisa and Davide from the Punta Ala Camping Resort, Davide and Alessandro from Bagnoli bike, and the brands that sent us the bikes.