An exciting race kicked off the season today in Leogang, as the first stage of the UCI DH World Cup 2021, thanks to a mixed terrain, difficult to interpret and full of pitfalls. In the sections of the track exposed to the scorching sun of June, the athletes faced dry, almost dusty ground, while in the sections of the forest, already steep and full of roots, mud continued to predominate, deep and slippery during the women’s heat and more compact and dry during the men’s heat, but in both cases enough to complicate the riders’ lines and the grip of their tires.

Troy Brosnan opens his season in the best possible way, dominating both yesterday’s qualifying round and today’s race, the only one to break down the threshold of 3:27 and to slow down the French supremacy. Brosnan nailed a perfect run, free of errors and, with an incredible progression especially in the central part, in the woods, where he maintained a clearly superior pace to all the competitors. 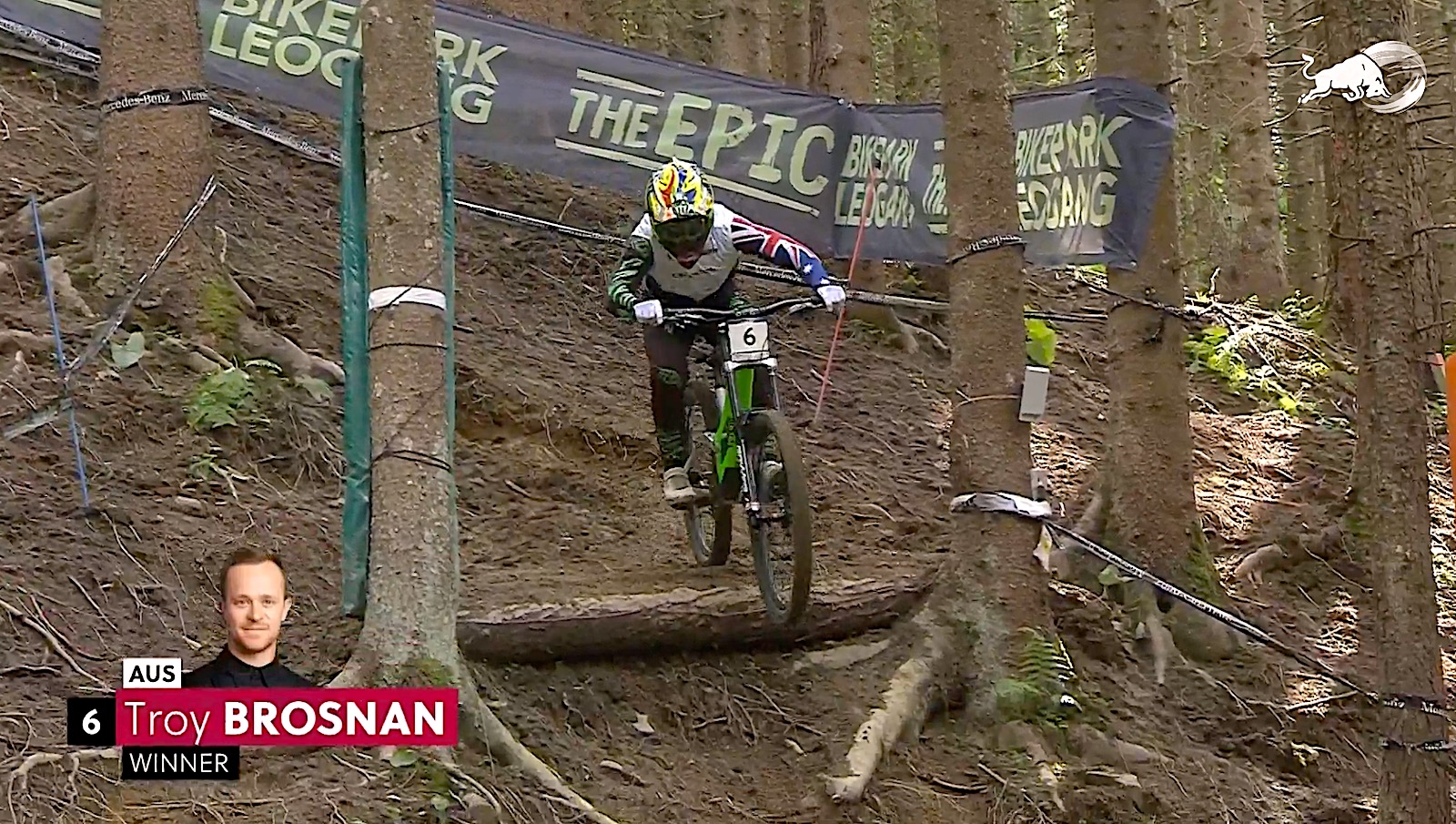 Second place for the young Thibaut Daprela, who was already an absolute dominator in the Junior category until a couple of years ago and now, according to what he was able to demonstrate in this event, a reference athlete in the Elite category. Daprela put dow an excellent time, landing in second position despite a mistake in the mud that slowed him down conspicuously. 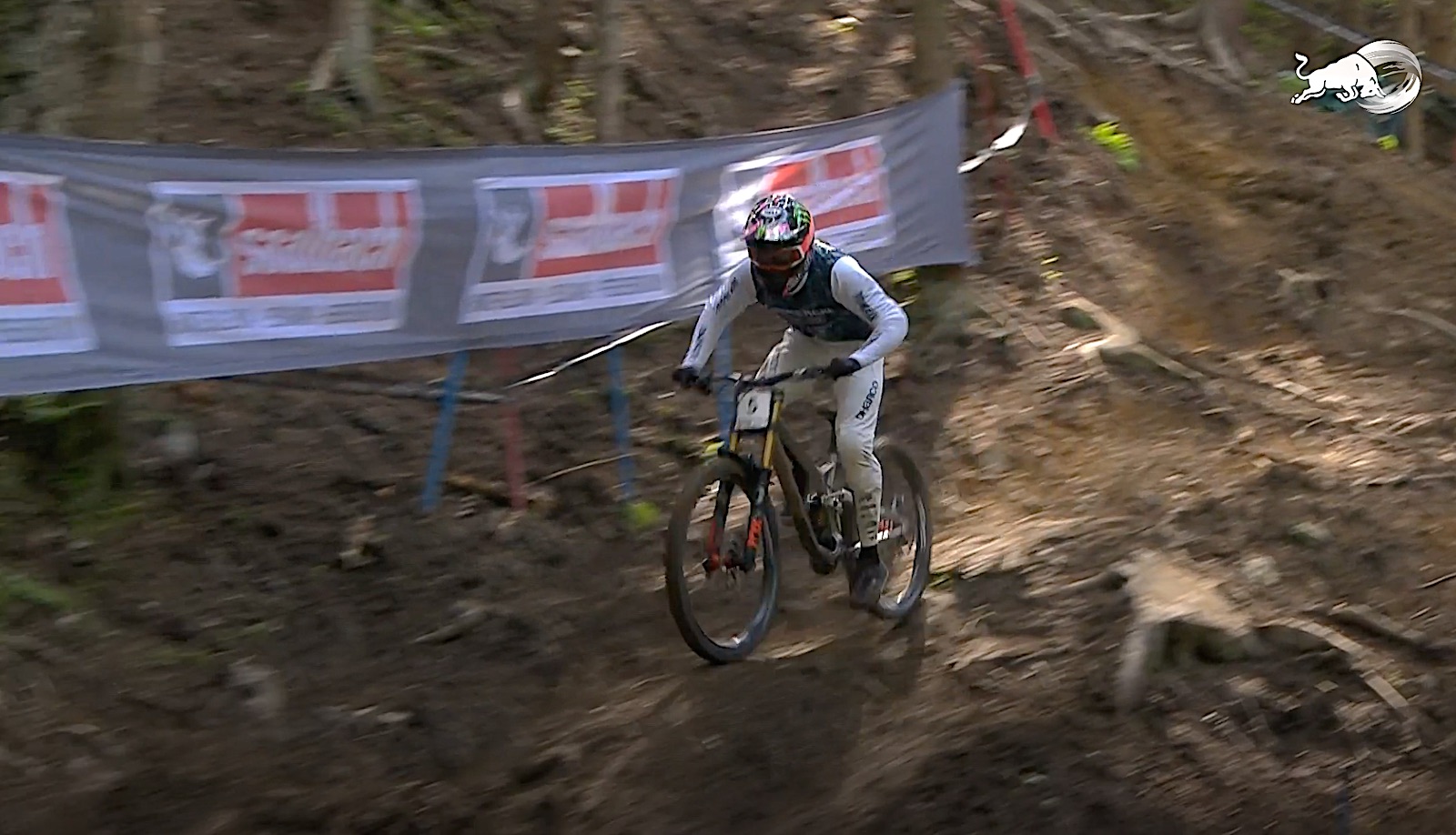 Behind him, with a little more than 2 tenths of a second, his fellow countryman and teammate Amaury Pierron who seems to have returned to full speed after the injury that kept him away from the races for the entire albeit very short 2020 season. 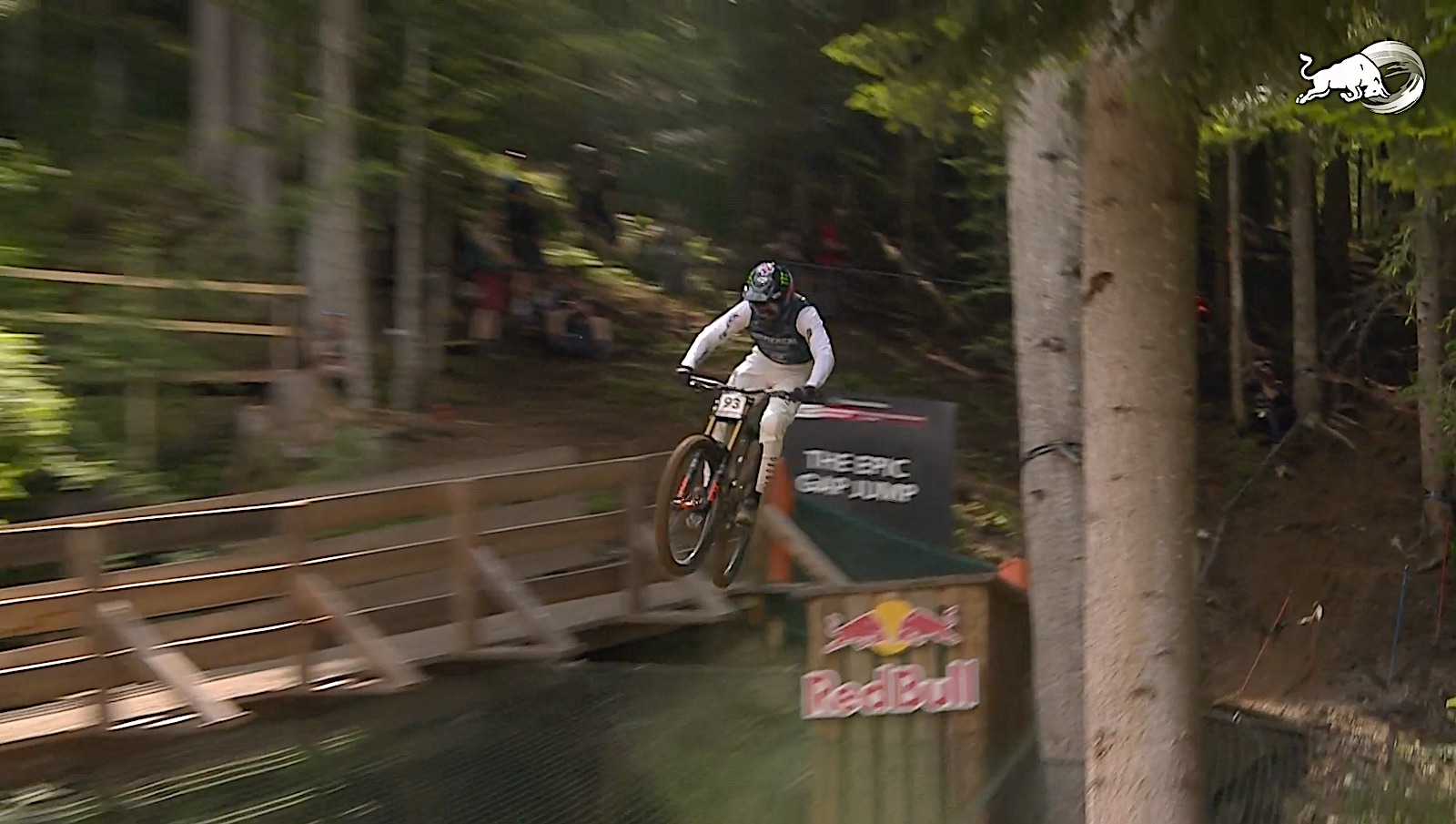 Reece Wilson, who won the world championship jersey on this track last year, confirmed his value by finishing in fourth position less than two seconds from the best time of the day. Fifth position for another French rider on Commençal, Benoit Coulanges, while many top riders finished  toward the back despite not making any noteworthy mistakes, a symptom that the general level is rising considerably, making it really challenging to finish in the leading positions. 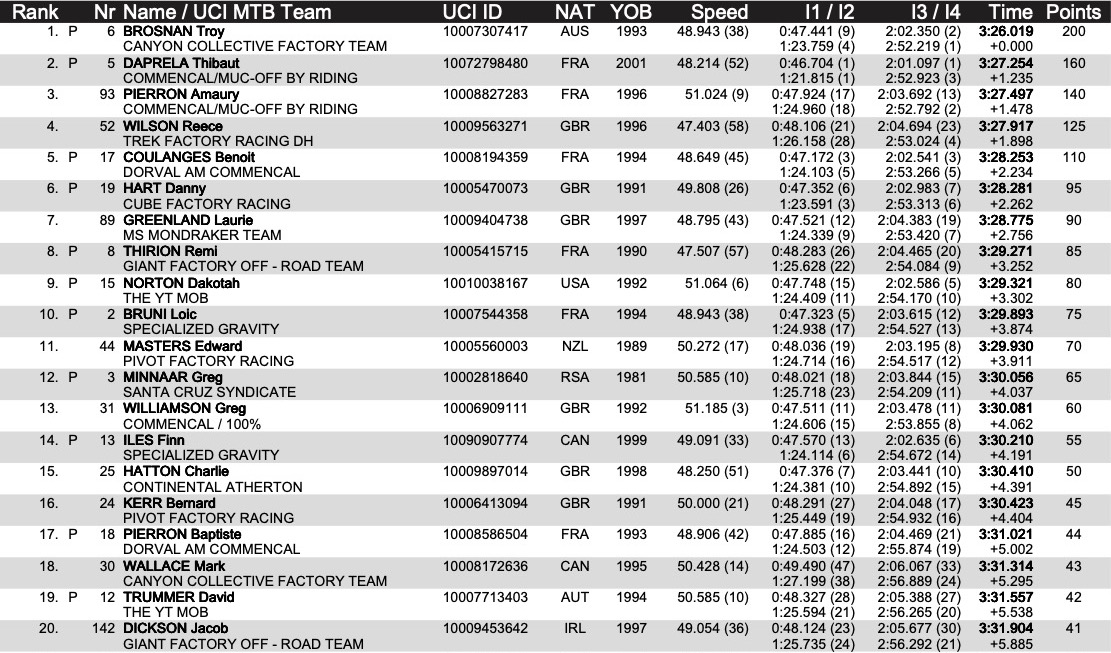 In the women’s field, where theconditions were worse than those encountered by men, the victory of Valentina Höll was expected, not only because she is among the absolute favorites of this season but above all because she is at home in Leogang where she trains. In fact, Vali dominated the race with an abundant advantage until the last section where a trivial crash relegated her to second position, leaving her visibly embittered. 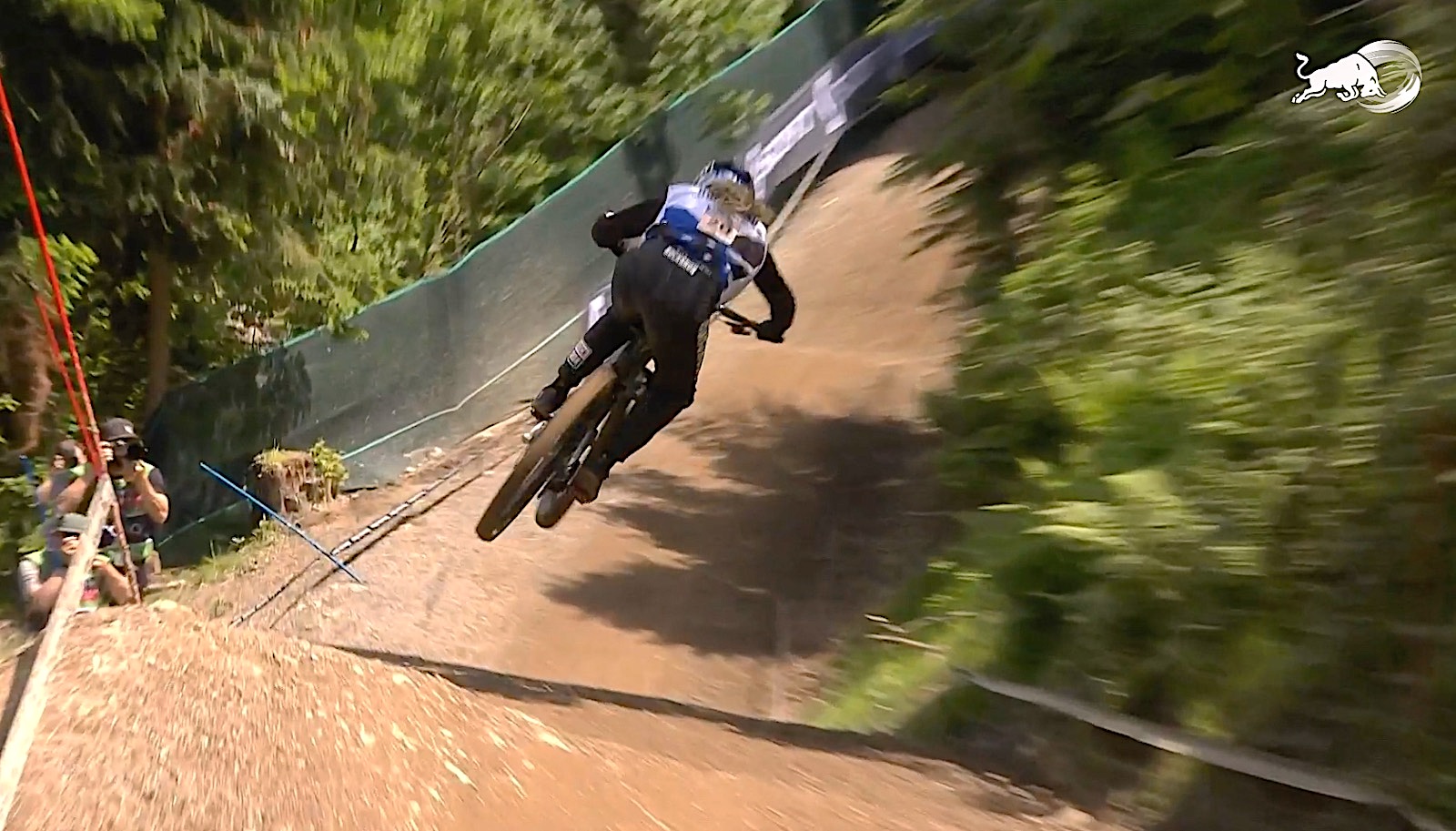 That crash offered the victory on a silver platter to the world champion Camile Balanche, who is confirmed to be in excellent shape but above all in harmony with the Leogang track where last year she won her first world title. A smooth, consistent and well-managed descent allowed her to set the best time and take the lead in the overall. 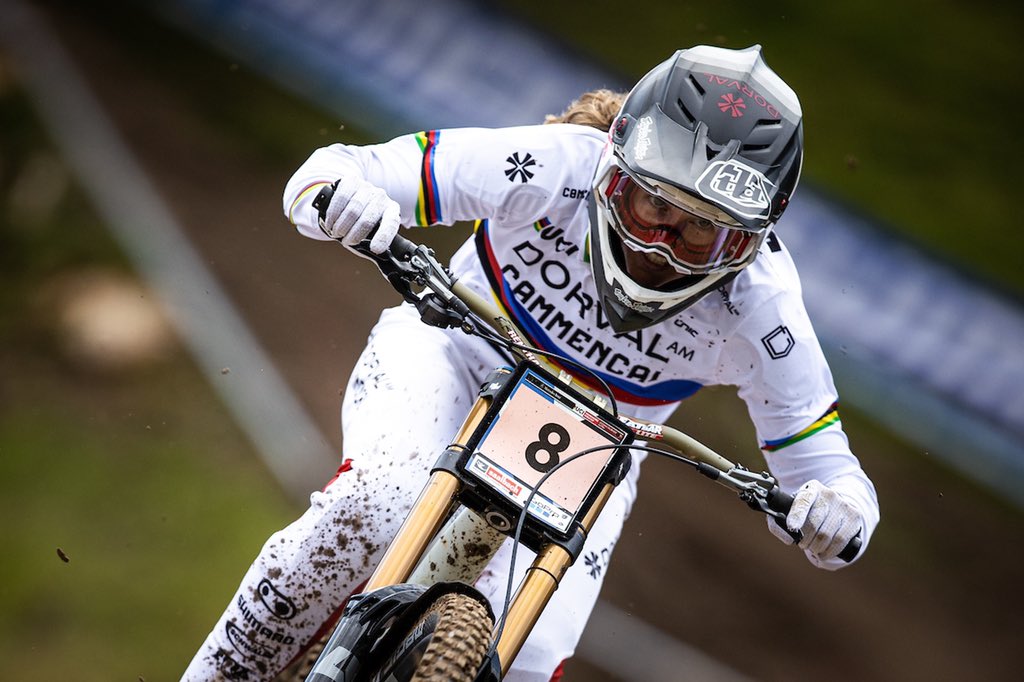 Third place for Monika Hrastnik, only 6 hundredths of a second behind Vali Höll and firmly in the leading group in the opening of the season in Leogang, with more than 4 seconds ahead of her pursuers, puts a good score in the bank for the overall chase. 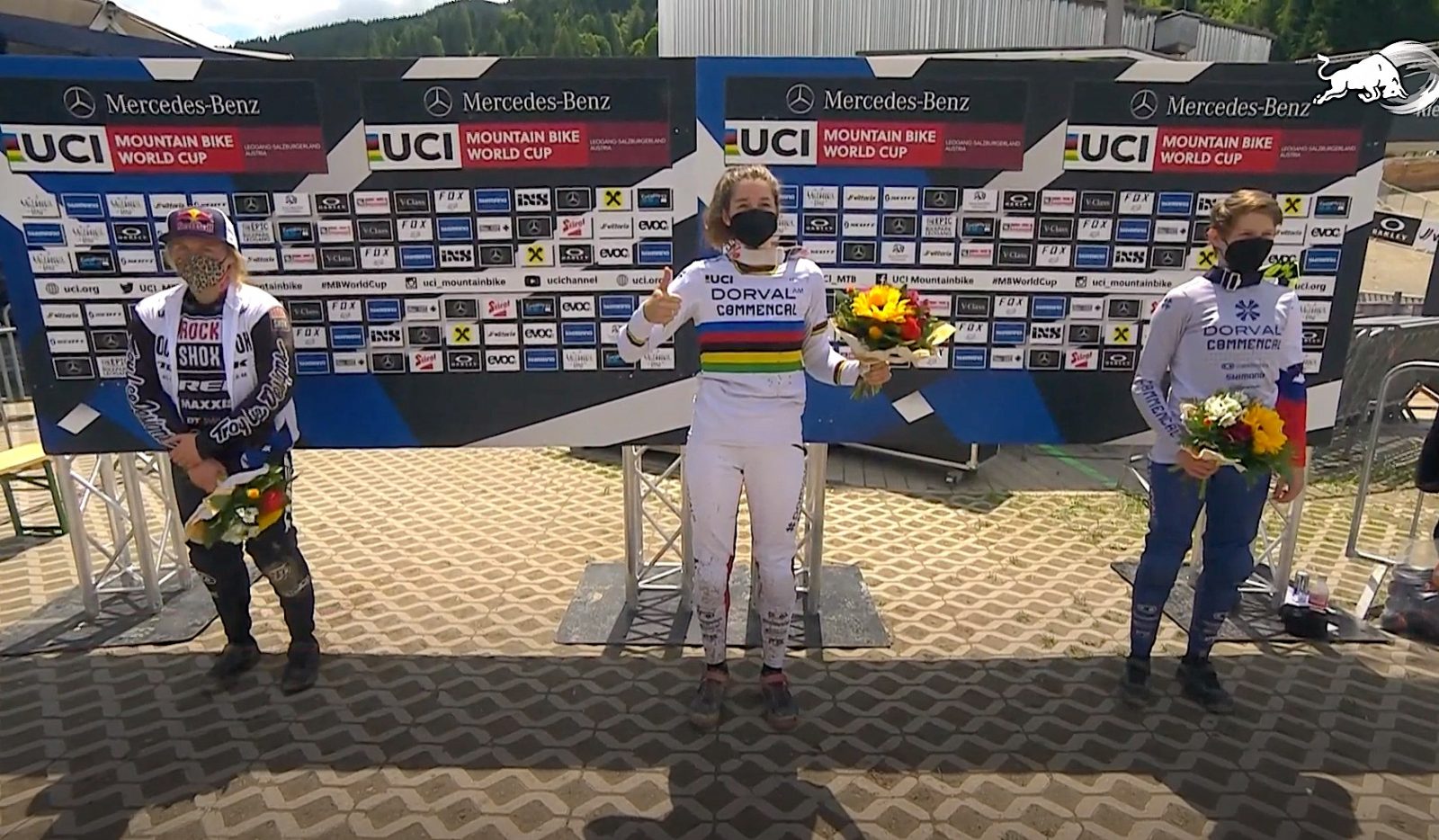 Fourth position for Marine Cabirou who, after a risky landing from one of the jumps in the initial section, reasonably lost concentration and did not attack the track as usual. Even Tahnée Seagrave, in fifth position, did not seem completely comfortable on the treacherous Leogang track. Sixth position for Eleonora Farina while Veronika Widmann, with a crash to the ground, takes home the ninth place.

In the increasingly fierce male Junior category, the challenge was intense, with the Spaniard Pau Menoyo Busquets setting the best time by only half a second behind the favorite Jackson Goldstone, on his debut in the World Cup after having distinguished himself in the world since age 9. Third position for the British Dennis Luffman, just over 1 second behind Goldstone. Winning in the female Junior category is Sophie Gutohrle, who, even considering she played at home, still trimmed over 10 seconds to the reigning world champion and dominator of the 2020 season, French racer Leona Pierrini. Third position for Izabela Yankova while Sophie Riva failed to confirm the excellent result of the qualifiers and ended in seventh position.

The World DH is back on track on 3 July with the French stage of Les Gets, the second event of the 2021 UCI DH World Cup season.