Snowshoe hosted the 2021 UCI DH World Cup Final in a thrilling conclusion for the points chase. Unlike race # 1 which took place on Wednesday , this second event in the US location was full of twists and turns and proved absolutely engaging, with all the athletes determined to give their best to end the season with a significant result and with the top riders concentrated on the fight for the overall title.

And the most concentrated was Loïc Bruni who, absolutely flawless, nailed his lines with speed, agility and precision in each of the sections of the challenging American track, winning the race and earning the points necessary to win the overall title. 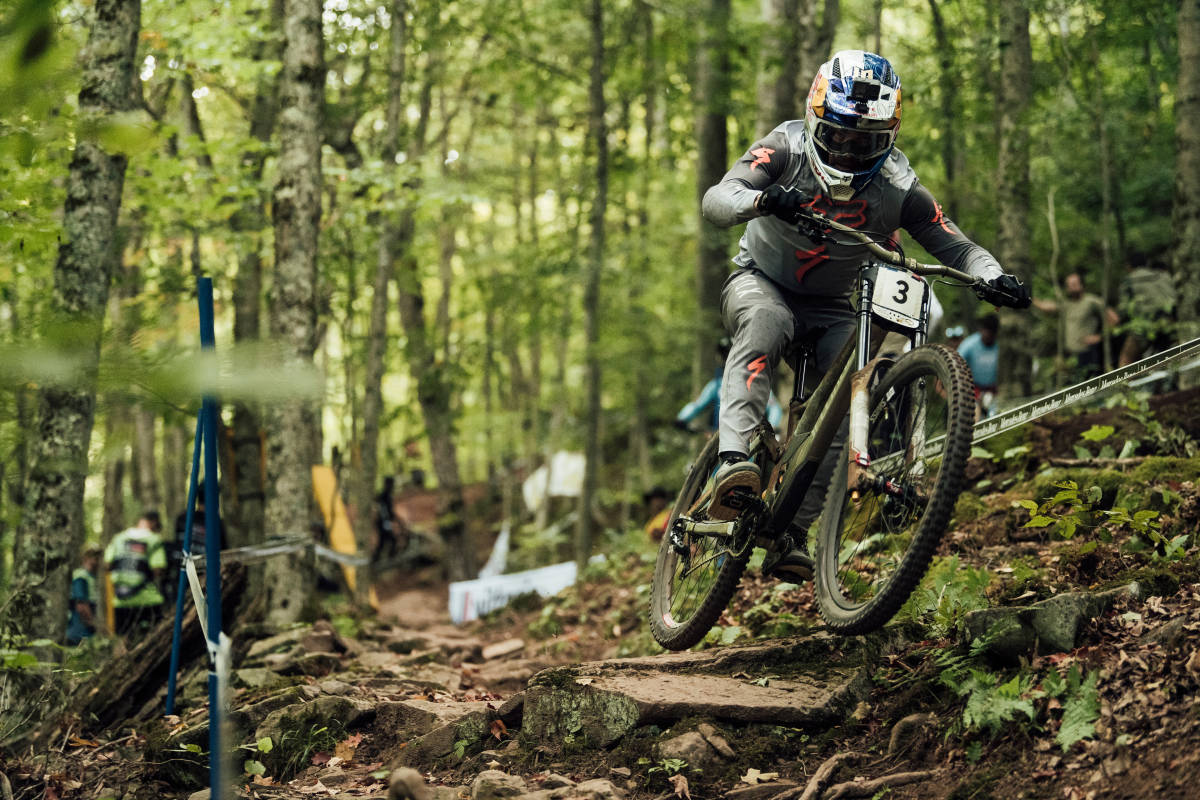 It’s worth taking a second to admire the mental strength of this athlete who simply does not allow himself to be overwhelmed by emotions and pressure in the most decisive runs. 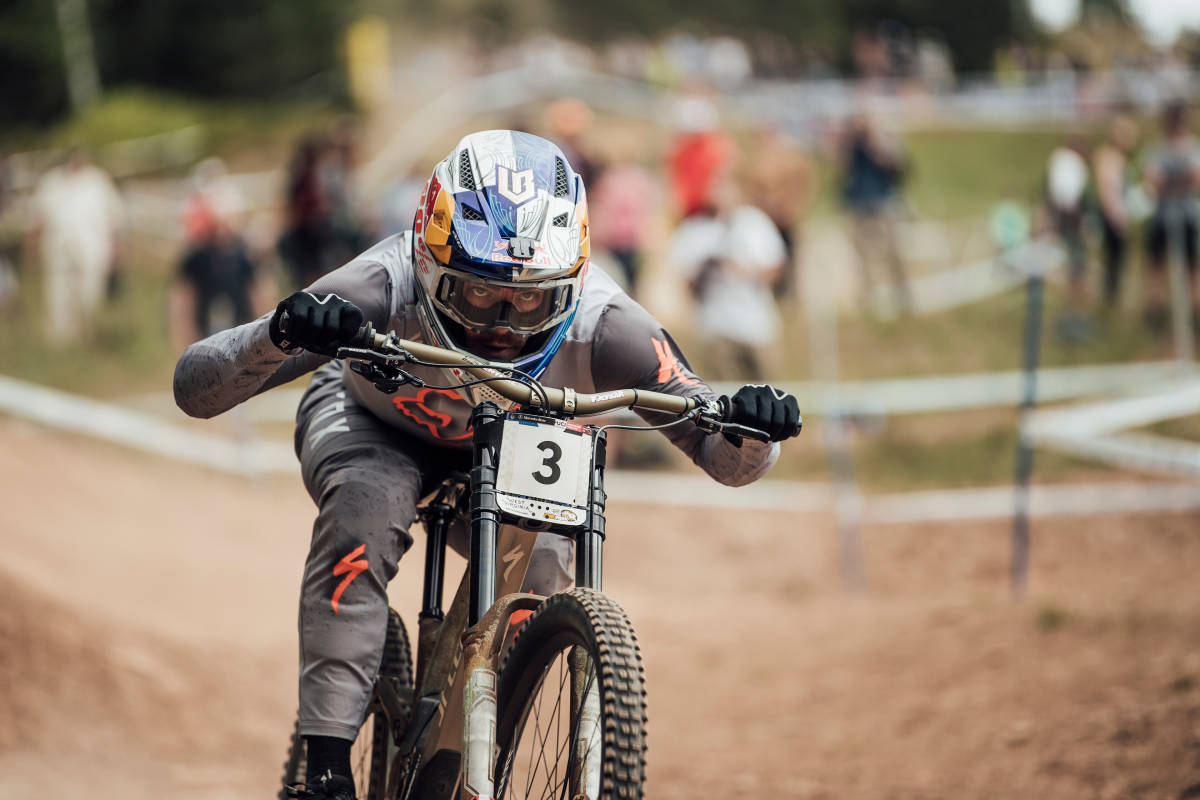 Troy Brosnan’s run was also exciting, always on the attack and very close to Bruni’s time, less than half a second behind, which earned him an excellent second place. This bumped him to fourth place in the overall, the first of the “non-French” in this ranking – which underlines their dominance in 2021. 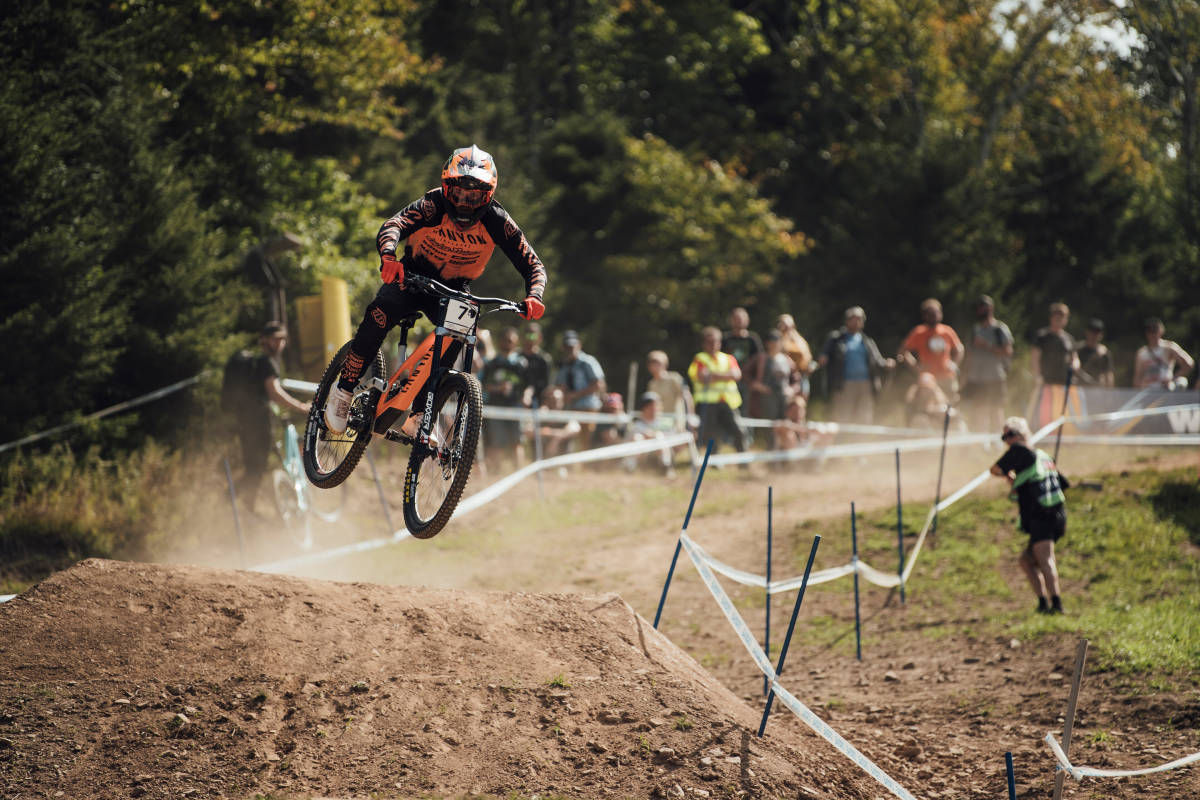 Third position for Angel Alonso Suarez who put together the best run of his career, sitting for a long time in the hot seat and determining the time to beat for all the top riders. A time that only two managed to best while for the others, Suarez’s performance obviously added further difficulty to an already tense race. 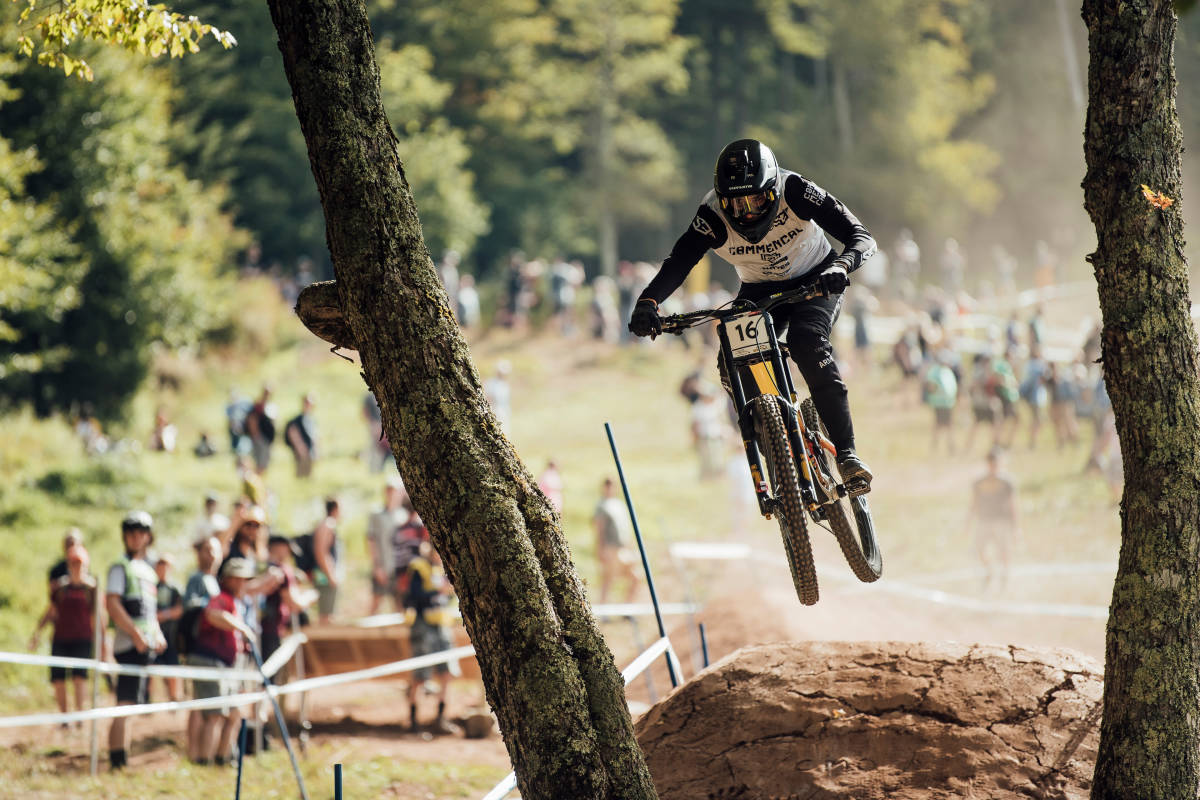 Among them was Loris Vergier who made a series of erros, clearly overwhelmed by the pressure for the race and for the title chase at hand with the absence due to injury of Daprela, circuit leader to date. He concluded in 54th place and slipped to third position in the rankings. 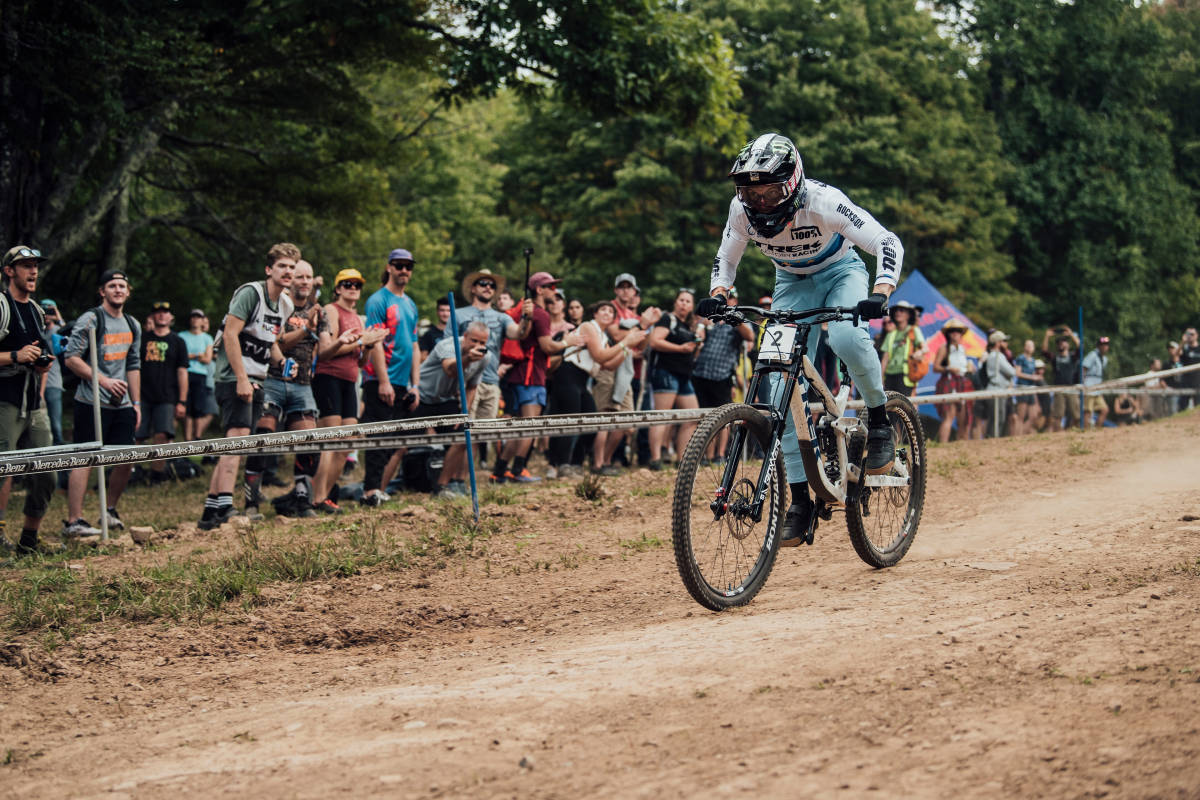 Amaury Pierron interpreted the Snowshoe track very well and came very close to Suarez’s time, just 1 tenth behind him, but it was not enough to overtake him and he remained at the foot of the podium, in fourth position. The general classification sees him in sixth position despite the absence at two races due to injury. 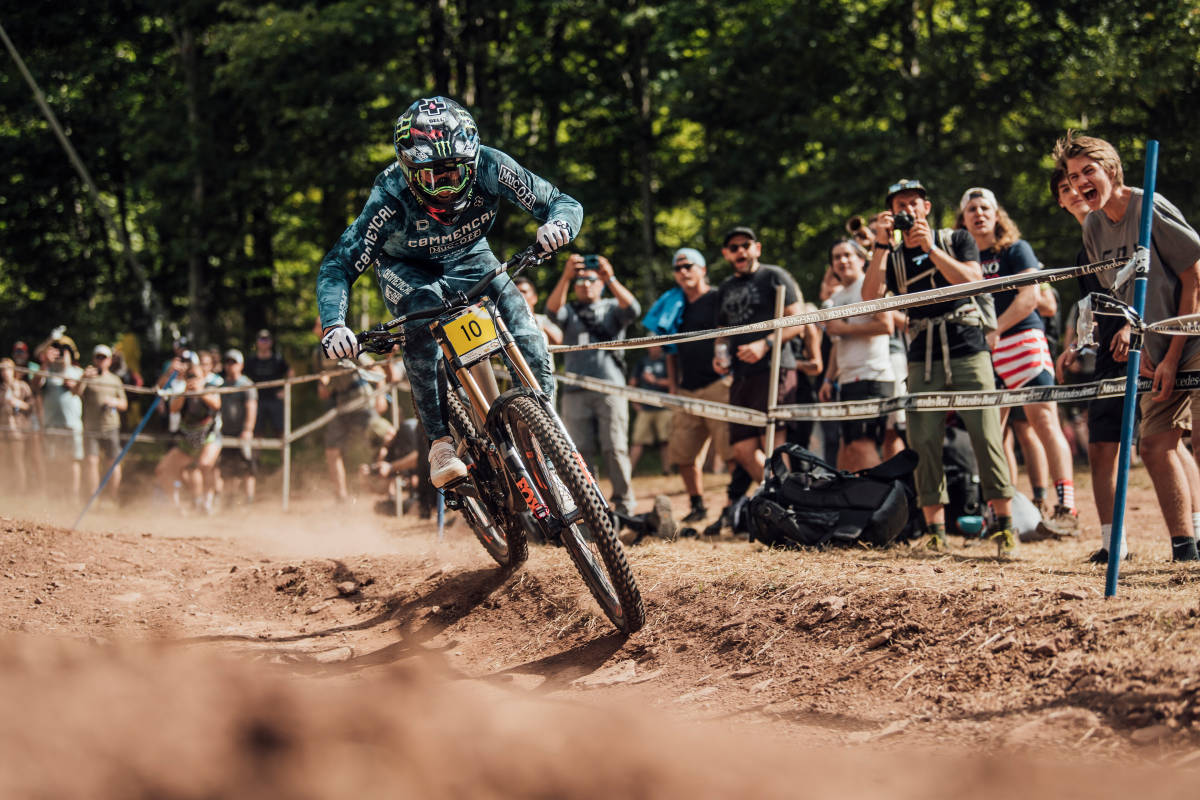 Fifth position for Luca Shaw who seemed a bit disappointed with the result and probably would have liked to get something more since he hasn’t collected much this season, which sees him only 16th in the overall standings but above all because a result in Snowshoe would still have had more value in front of the home crowd. 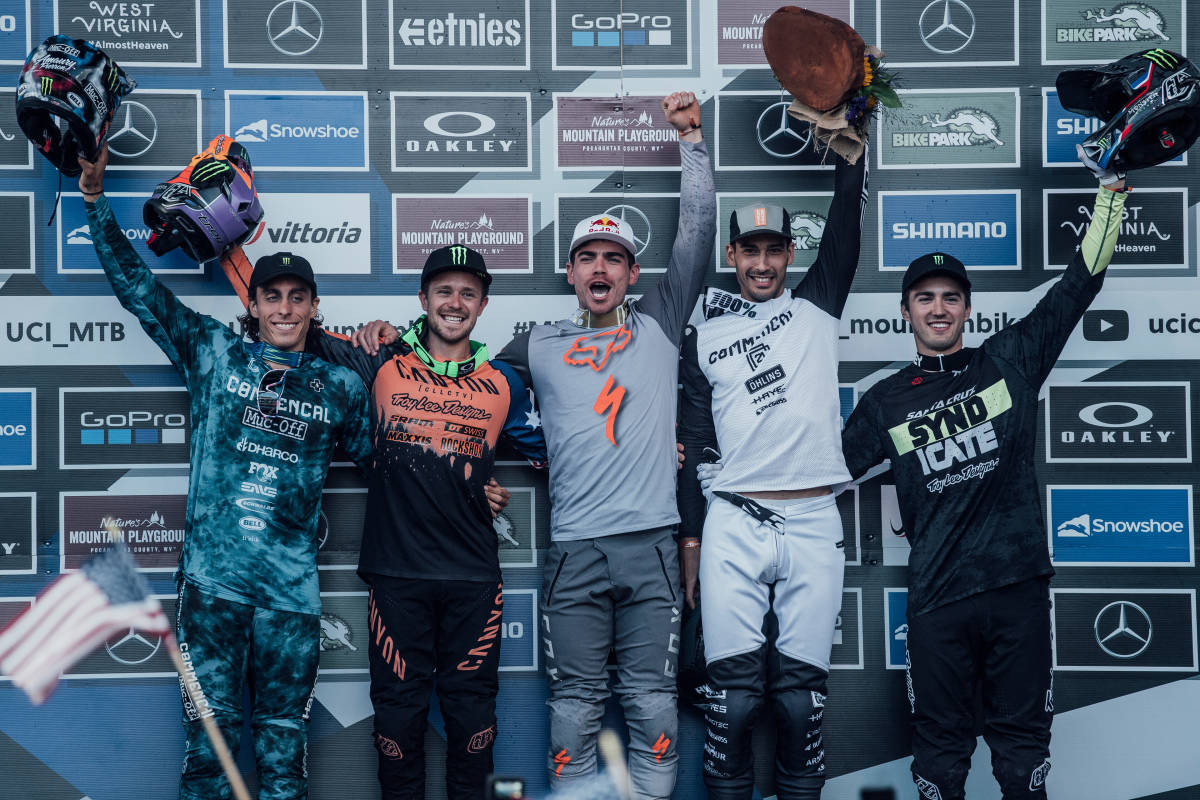 In any case, this was his best finish this season. 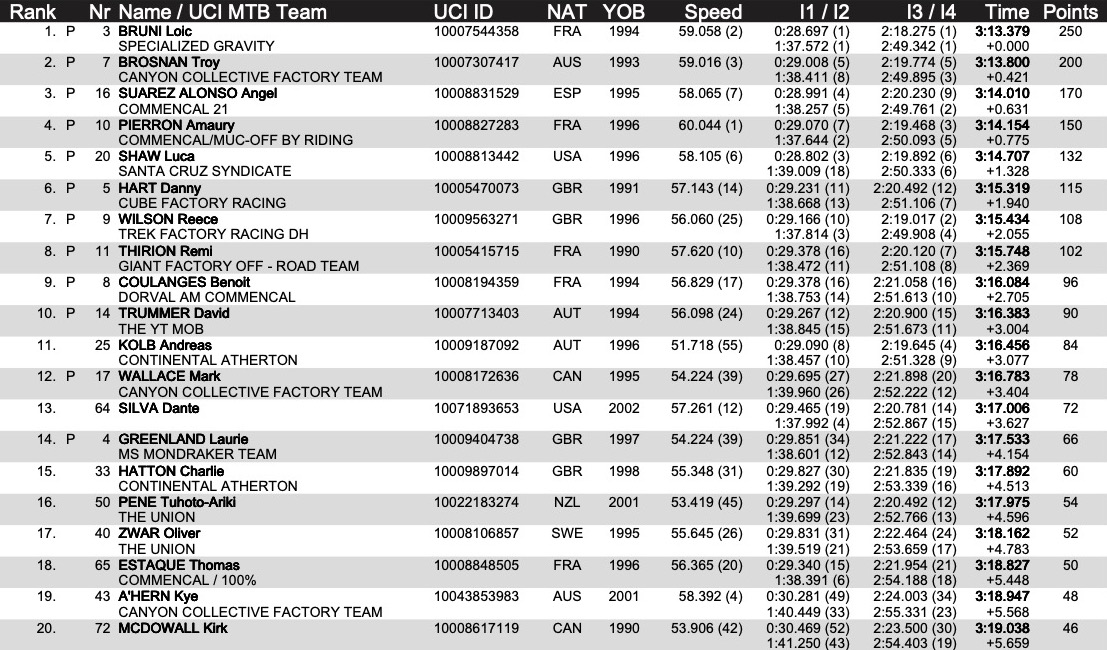 The women’s heat was unfortunately interrupted for a long time due to a big crash from Jessica Blewitt, who required a helicopter rescue for what looked like a fracture of the collarbone and the femur. Once the race heats started again, the athletes seemed even more aggressive and gave life to one of the most exciting races of the season for the female category with a series of breathtaking descents. A 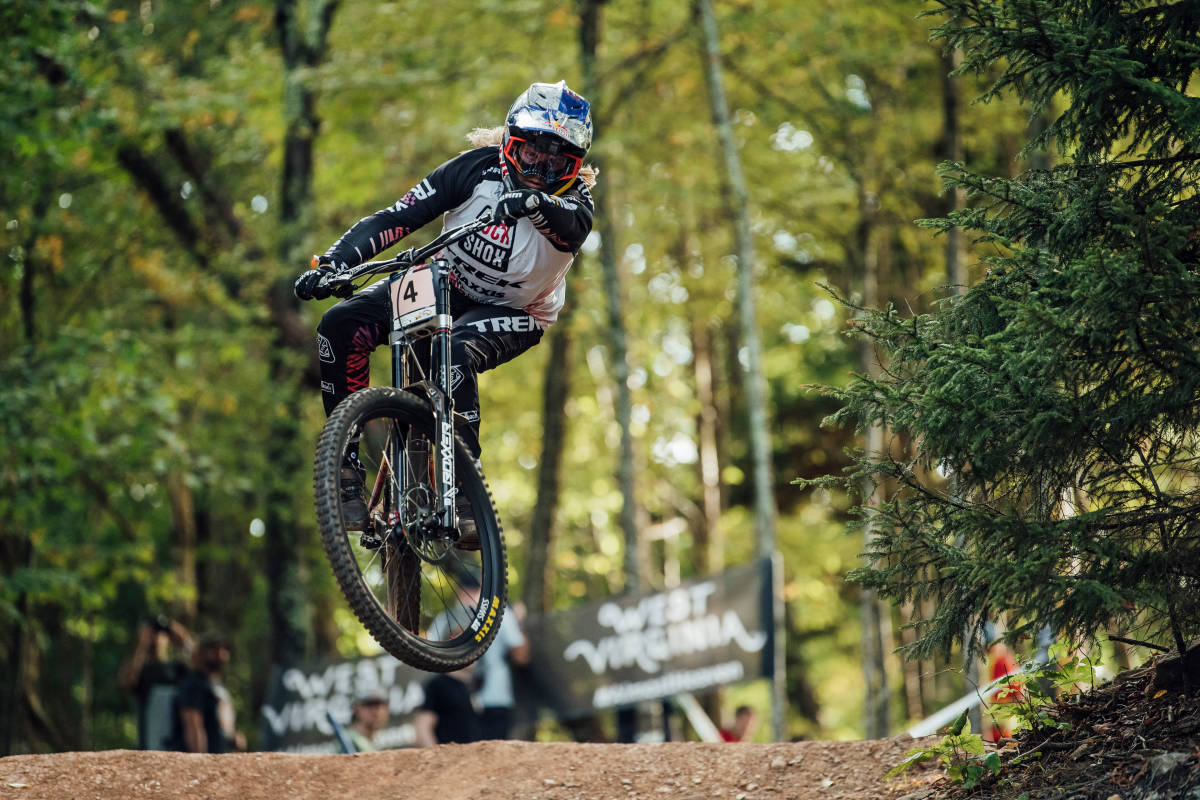 bove all, it is Valentina Höll who impressed with her absolutely aggressive riding that led her to win for the second consecutive time in the same week here in Snowshoe and to climb, incredibly, to top step of the podium for the overall awards ceremony. 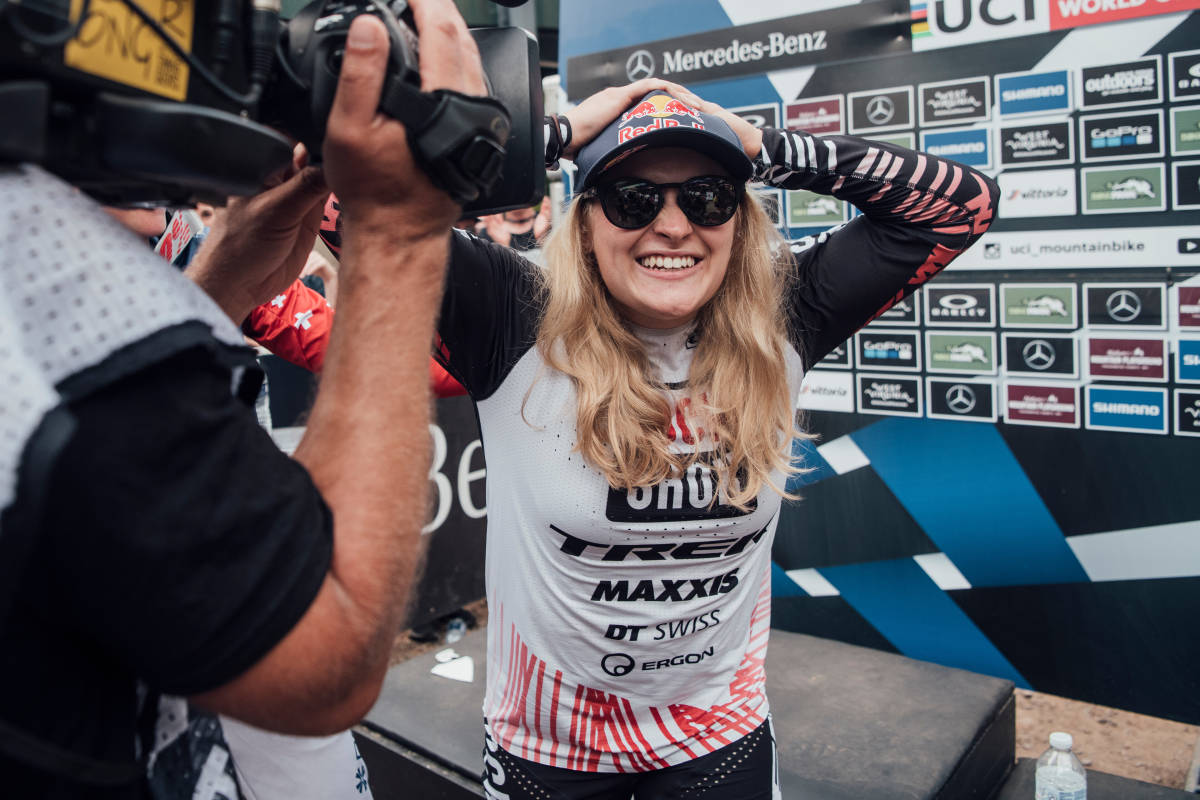 And it was Myriam Nicole, circuit leader until her descent, who gave her the victory of the 2021 World Cup, slipping in a seemingly trivial corner and finishing in 7th place while she was struggling to earn a podium position. She then slips into second position in the overall standings. 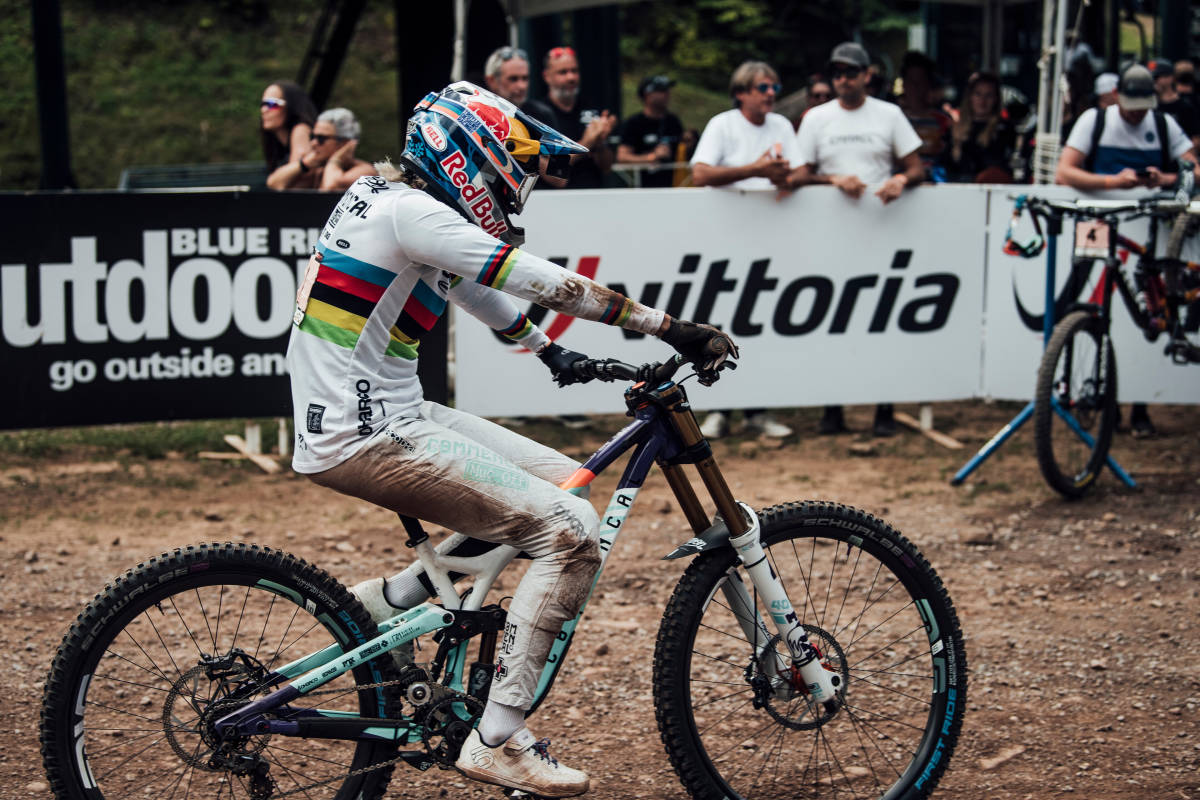 Second position for Marine Cabirou, excellent in her run, who nearly won the stage with only two and a half tenths of delay from Höll’s time. In the overall circuit she was fifth, despite having missed a race. 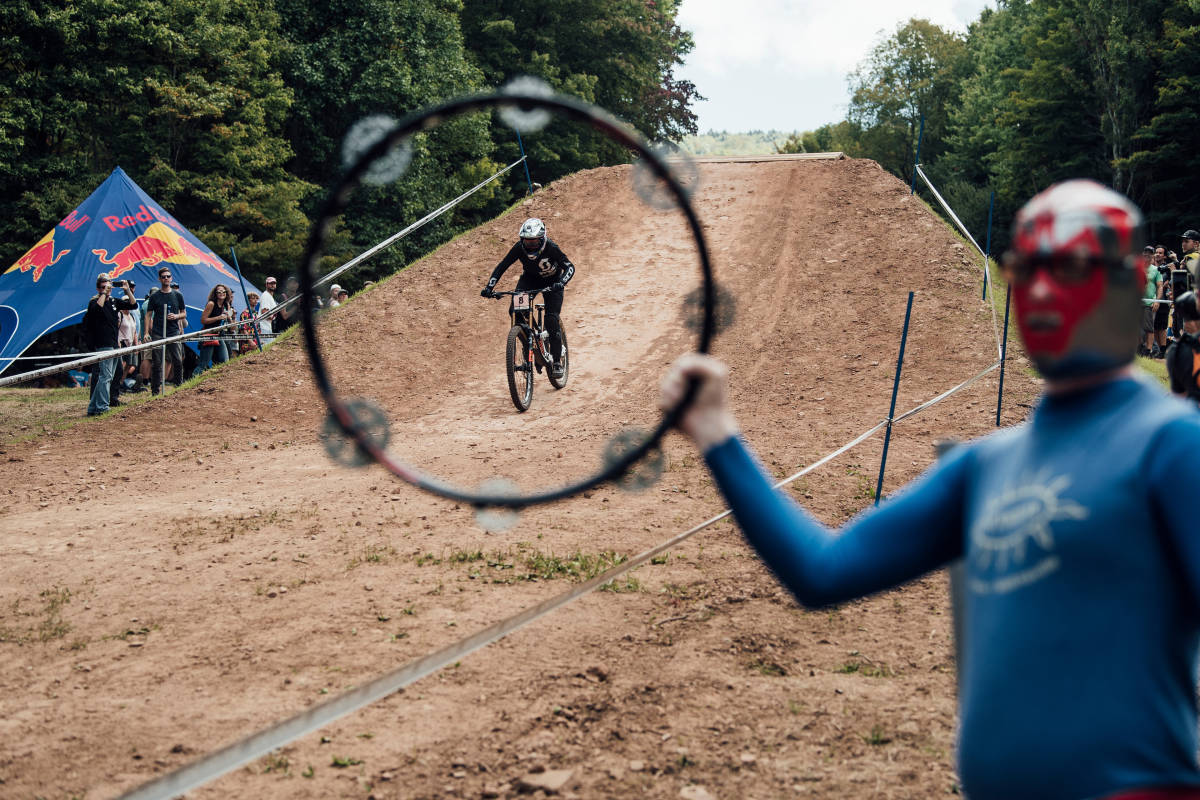 Camille Balanche this season has shown an excellent consistency of results that has consecrated her among the best downhillers in the world, confirming that she deserved the world championship jersey at the 2020 world championships. Today she concluded in third position both on the stage and on the circuit. 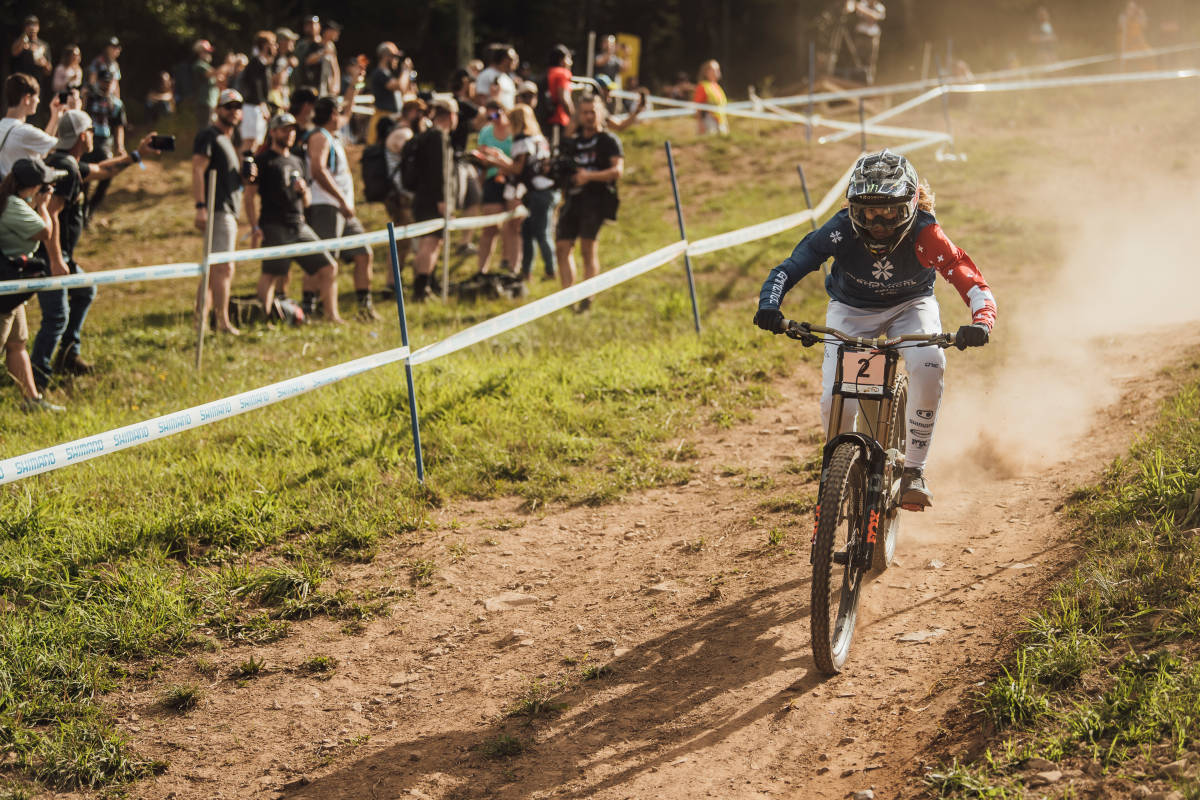 Tahnée Seagrave in this season finale is back in shape, precise and determined as she hasn’t been seen in a long time, since before her unfortunate series of injuries. He finished in fourth position, also in his case both in the race and in the circuit. 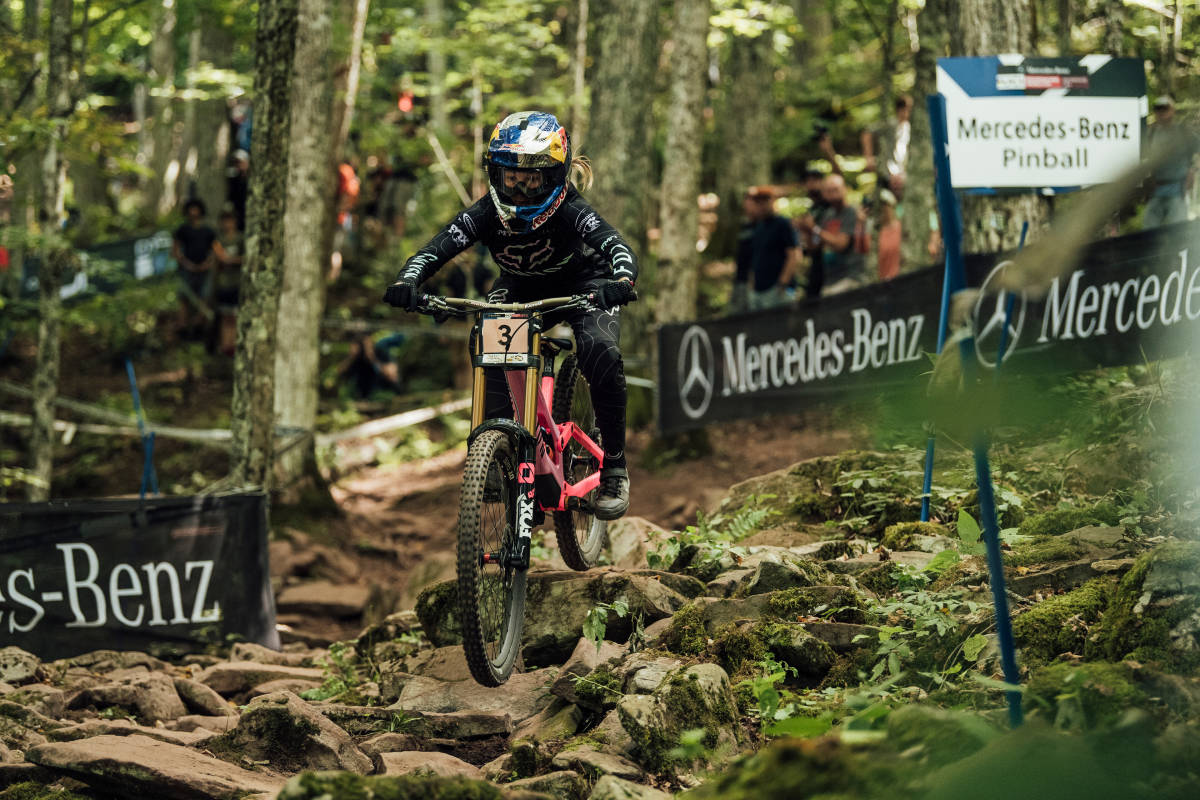 Fifth position for Nina Hoffmann who finished in tenth place overall, also with one race less.

In the men’s Junior category, the British racer Jordan Williams wins again, repeating Wednesday’s result, but it was not enough to overtake the world champion Jackson Goldstone who, with his second place, maintains the leadership of the overall and wins the 2021 World Cup overall. Izabela Yankova, came out swinging in this second part of the season that saw her dominate as well in the race for the world title.