Today Canyon presents the new Strive. Having now renvamped the entire lineup, the Koblenz brand has dedicated itself to its Enduro race bike. The Strive has been updated in every detail to refine the performance in the race field but remains strictly faithful to the previous model of which it represents the natural evolution. We had the opportunity to preview it for you on the trails of Finale Ligure. 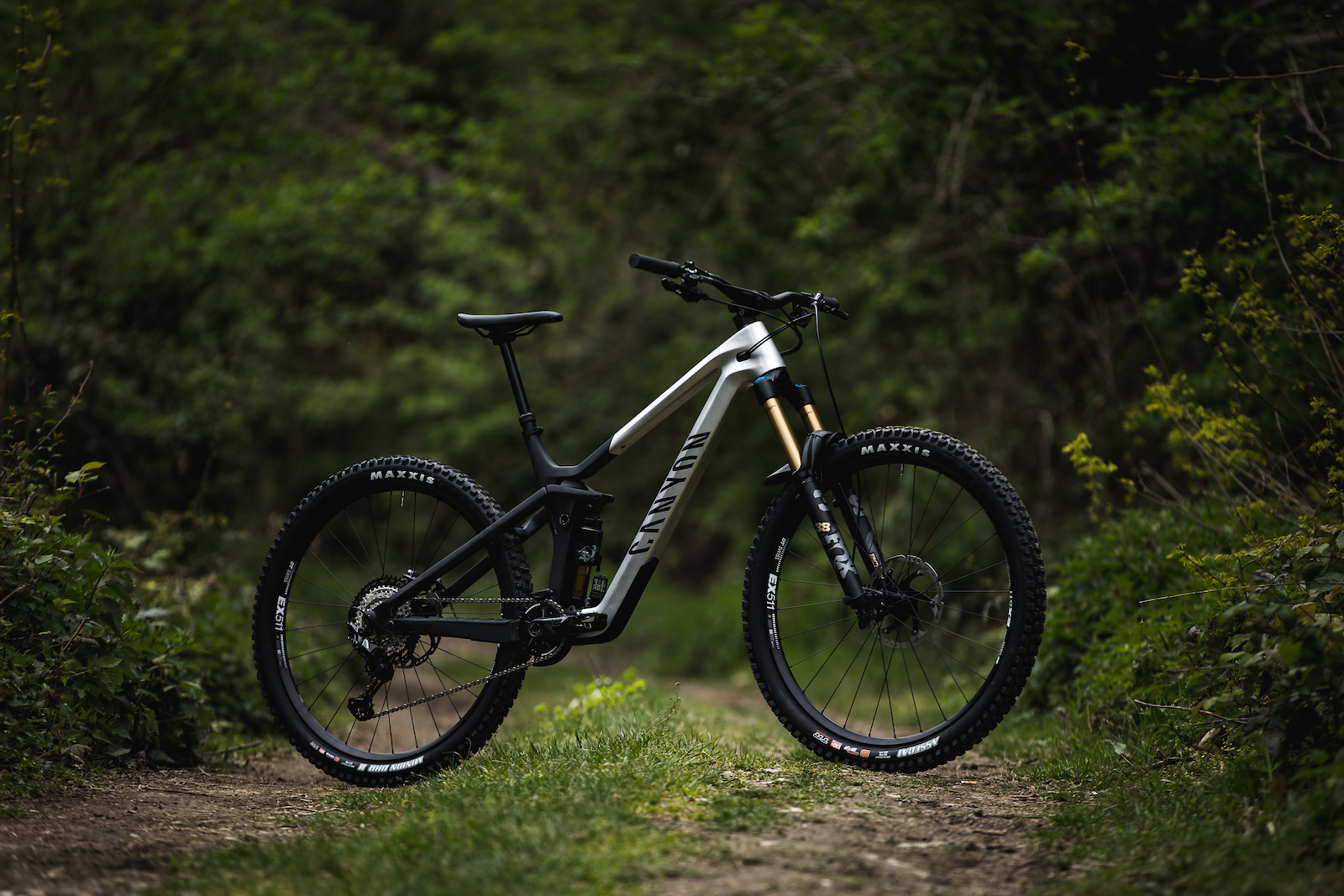 Canyon engineers started working on the new Strive model about two and a half years ago, taking a cue from the team’s advice to update the previous model to be a top performer for Enduro World Series racing and how the sport has further evolved in recent seasons.

More travel, new aggressive and adjustable geometry, a stiffer and stronger frame and an updated suspension system while the adoption of the Shapeshifter remains unchanged. Let’s find out all the details of the new Strive.

Although the general lines of the frame have remained unchanged, the detail of the section of the tubes has been completely revised with wider and more angular shapes that ensure greater structural rigidity. This detail is associated with a different lay-up of the carbon fiber sheets which form a stiffer and more robust frame than the previous one, but consequently also heavier, with about 300 grams of weight. The weight of the complete frame, however, is just 2,700 grams, only about 100 grams more than the Spectral. 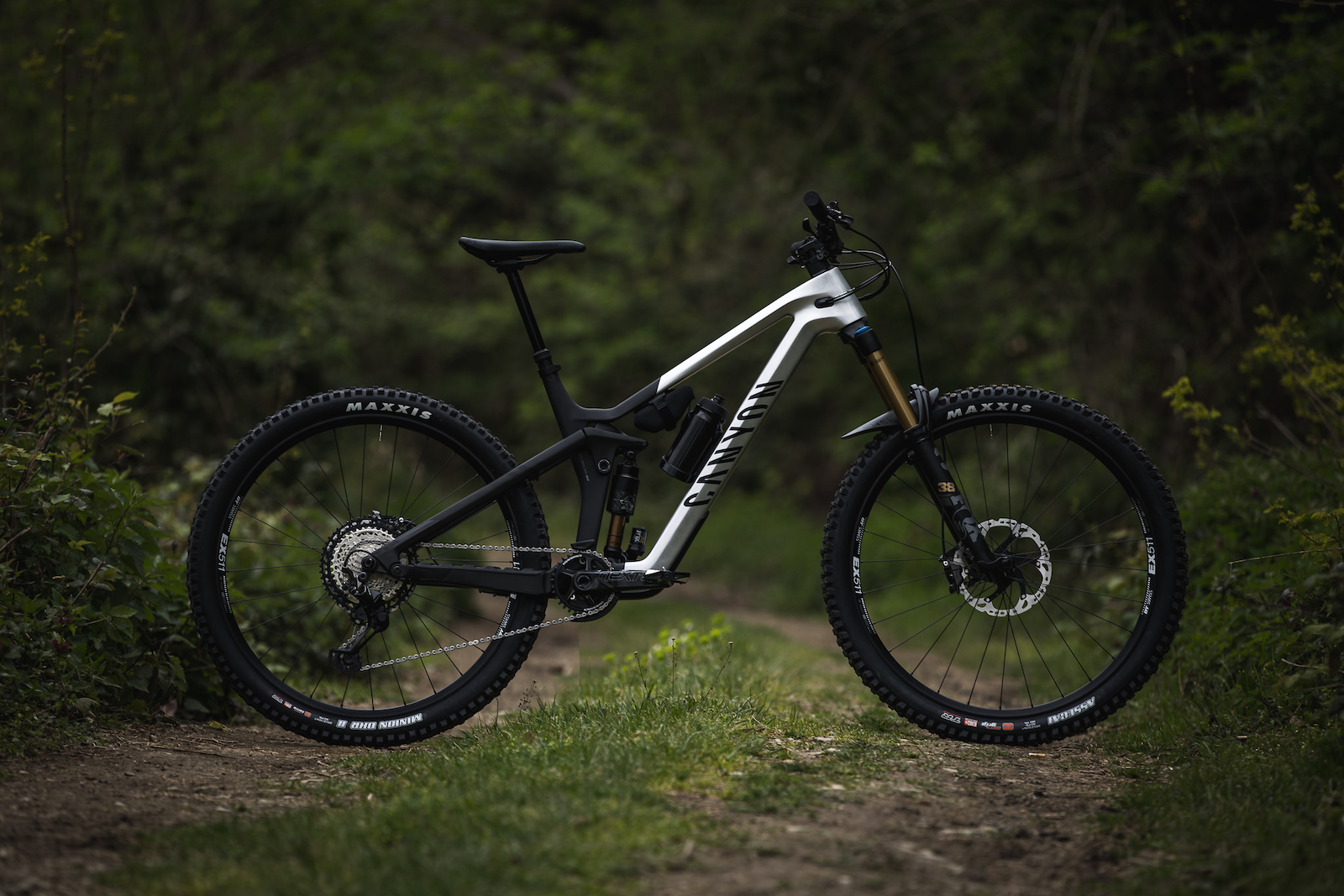 Canyon remains faithful to the adoption of the Shapeshifter system that allows you to vary both the geometry and the rear travel of the Strive during the race via a remote control on the handlebar. The Shapeshifter is the version 2.0, so it remains unchanged from the previous model and always offers a variation of 1.5° on the head/seat angles and 15mm on the height of the bottom bracket, but it is combined with a shock absorber with greater travel which implies two important changes. 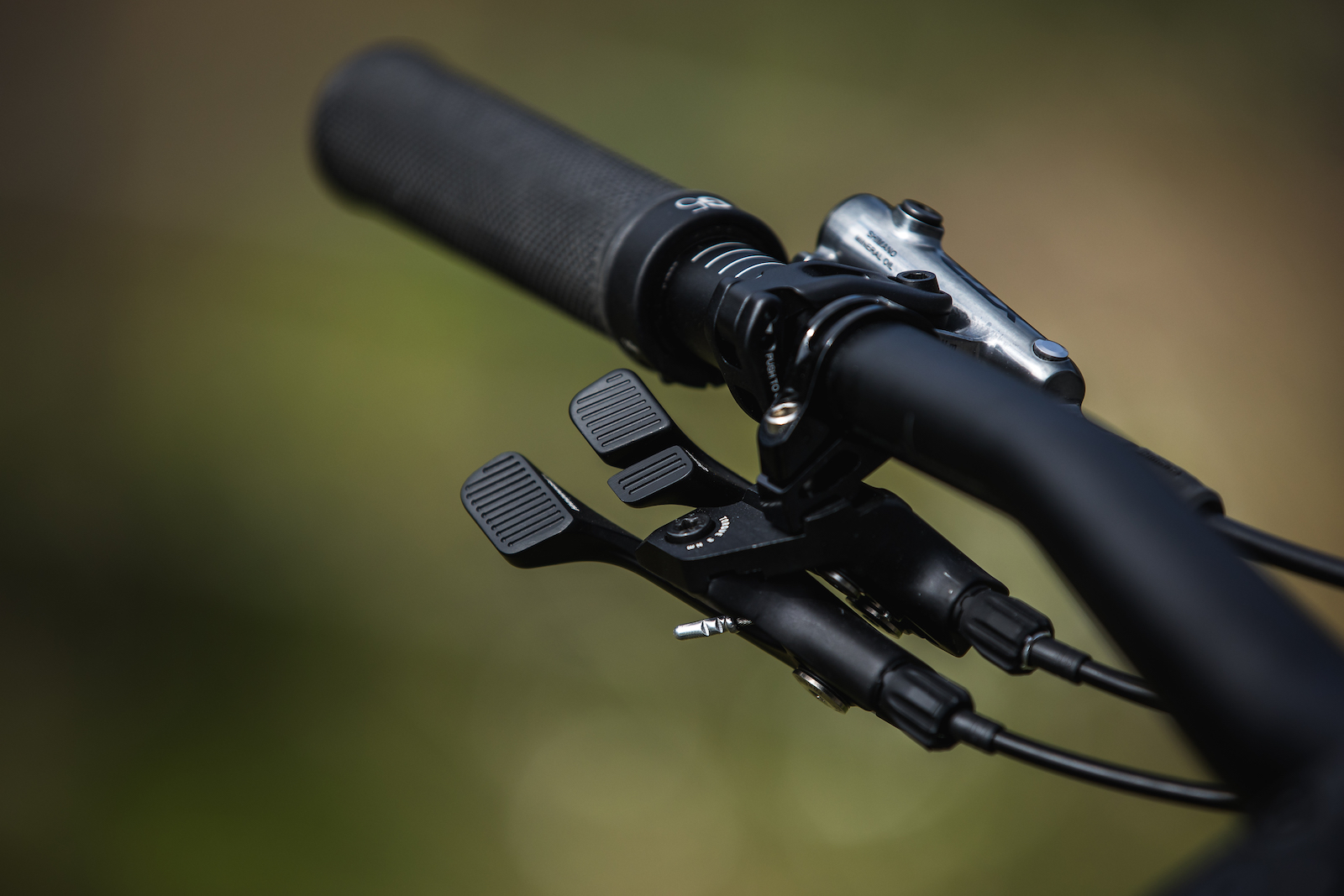 The first is that the shock has more air volume, hence lower pressure, which allows for softer and smoother activation of the Shapeshifter. The pressure to be put into the small Fox shock that activates the Shapeshifter is the same as by adjusting the sag of the main shock. 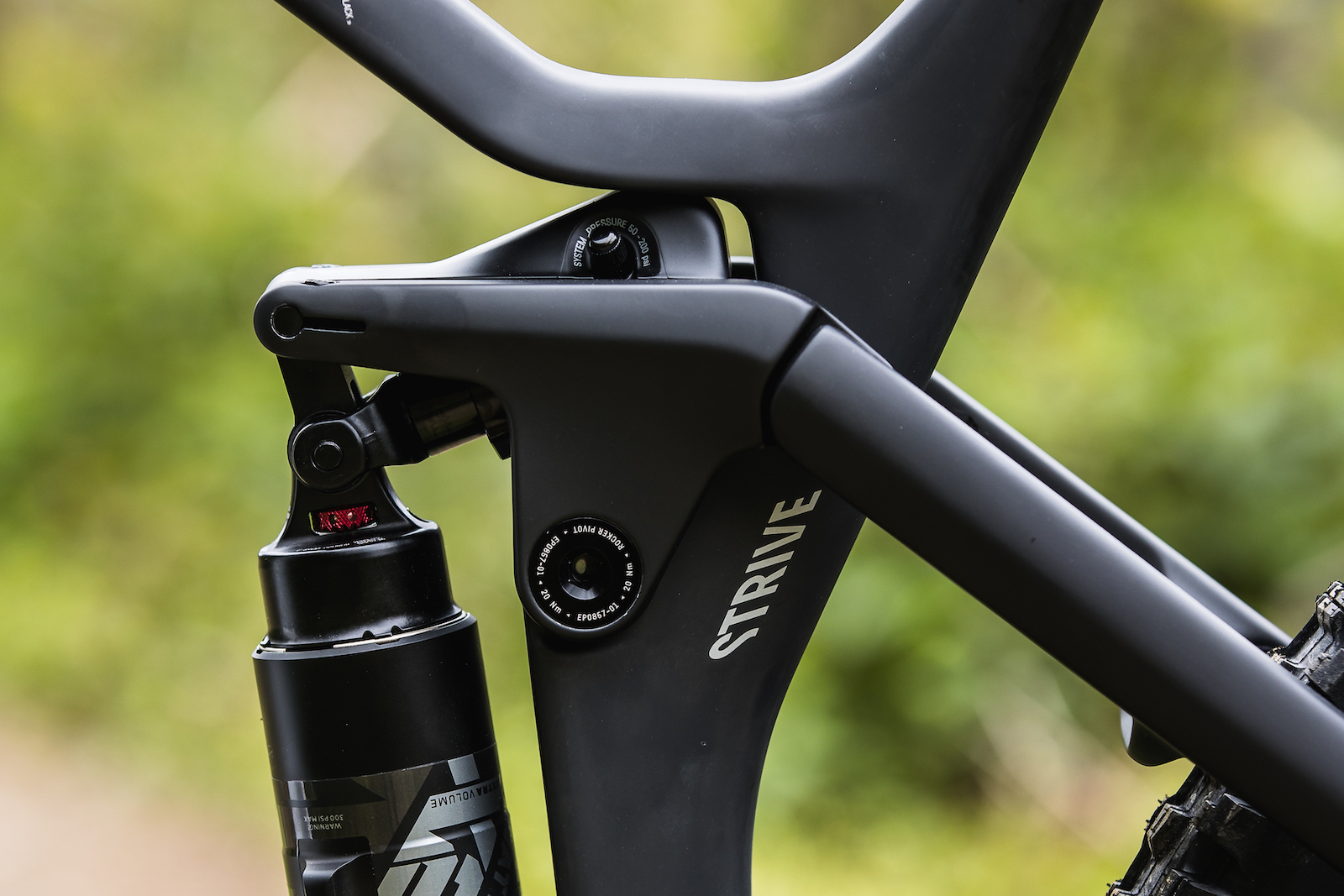 The second is that it now offers 160mm of travel in the downhill position and 140mm in the pedal position, so you have more travel than the previous model, especially in the pedal position which becomes more usable both on bumpy climbs, where it guarantees greater traction, and on descents – smoother and more composed where it offers a greater compromise between stability and absorption. 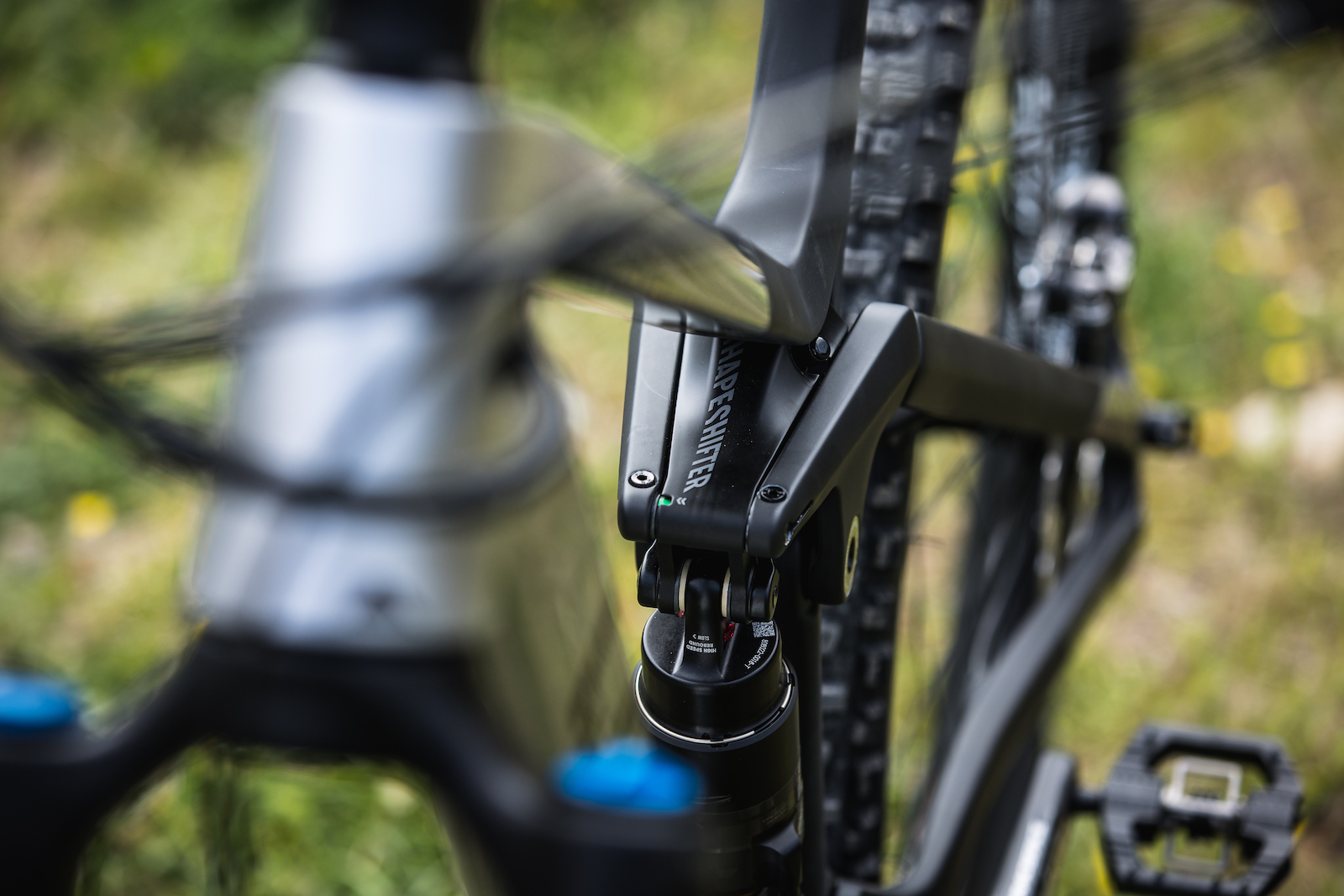 The suspension system of the new Strive has been revised, moving the Horst joint lower than the rear axle for greater stiffness of the axle, while the kinematics have been improved especially as regards the anti-squat and the consequent pedaling stability. The compression curve offers the same progression but distributed over travel increased by 10mm so the general behavior is more plush.

Another interesting aspect is the possibility of varying the length of the top tube to adjust the reach to your liking in a range of 10mm (+/- 5mm) through the elliptical headset cups that actually work like a pair of flip chips. With this system, inherited from the Sender, Canyon’s DH bike, even riders between two sizes can choose whether to take a longer size and shorten the reach or vice versa. It also becomes a possible adjustment to set the bike at its best in the race field based on the tracks on which you have to compete: fast track with long reach or twisty track with short reach. 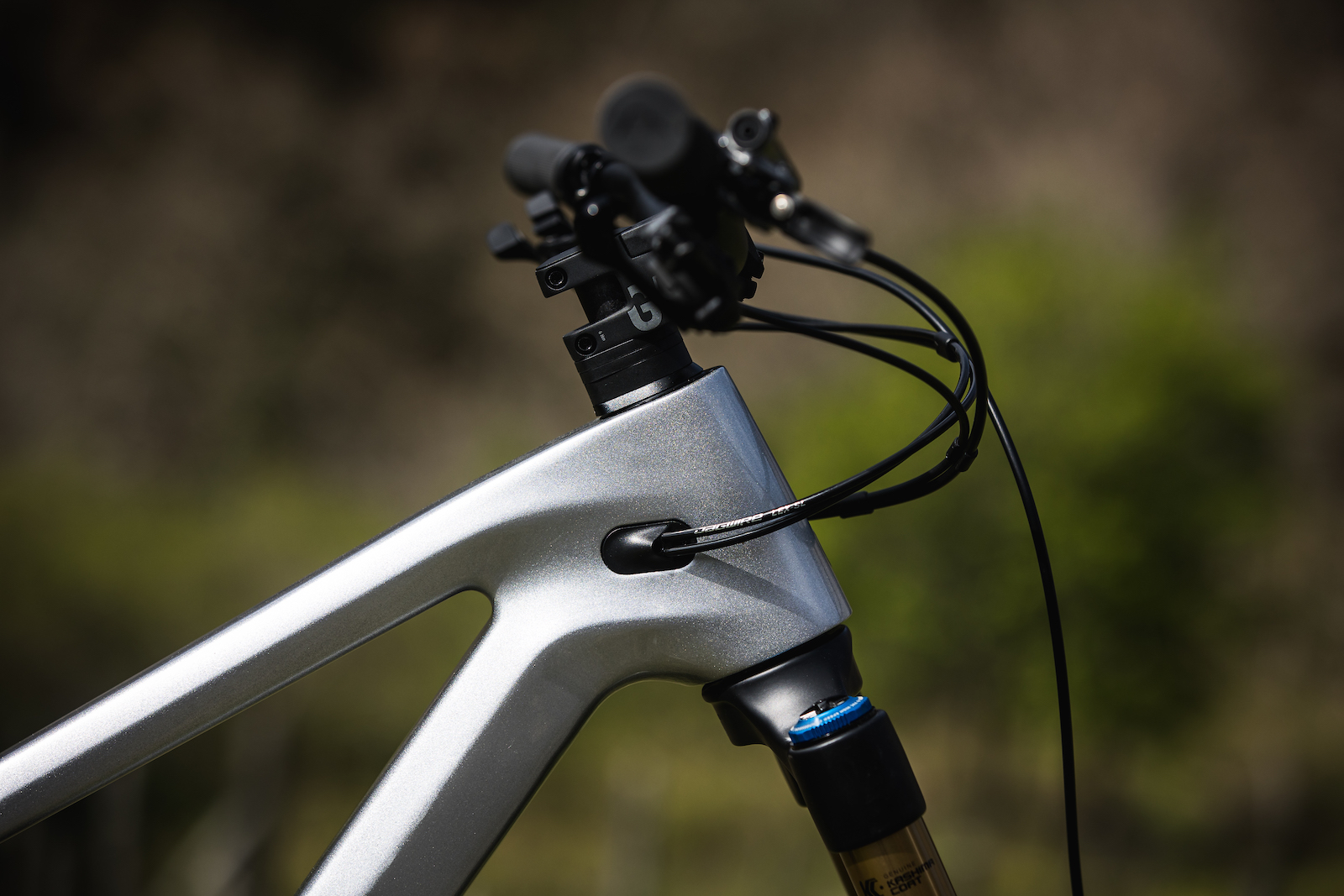 The front triangle offers space for both a bottle cage on the downtube and a storage compartment under the top tube. In the photo we see the specific product from Canyon that we found already mounted on the bike, but it is possible to mount any dedicated product, since the spacing of the screws is the standard one for the bottle cage. 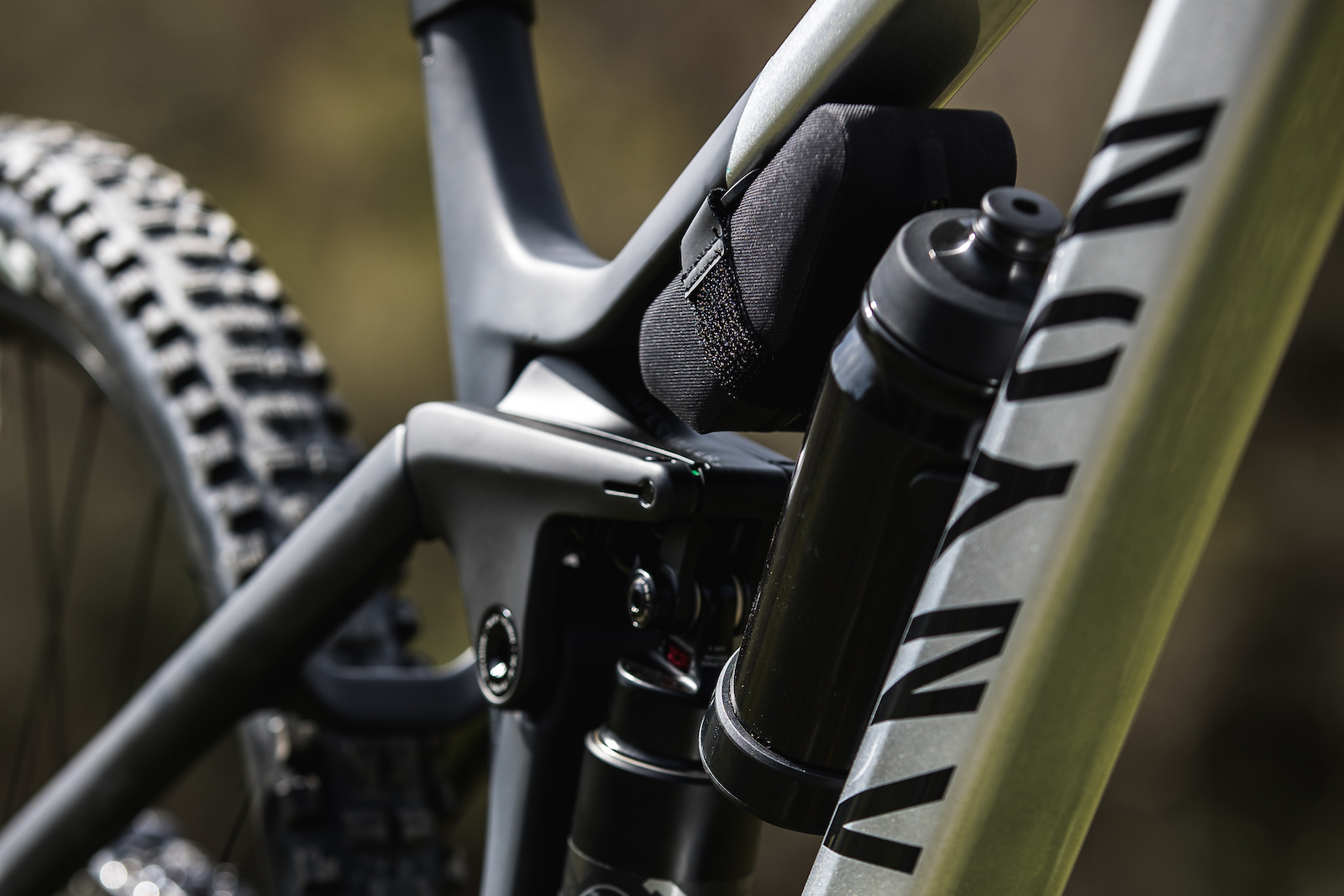 The cable routing is internal to the frame, guided by expanded foam tubes that facilitate routing and eliminate noise. Speaking of noise, the chain protector that makes the Strive very silent is absolutely effective, which I had already appreciated on the Torque which in fact uses the same chain guard. The protection under the down tube is also abundant and well shaped. 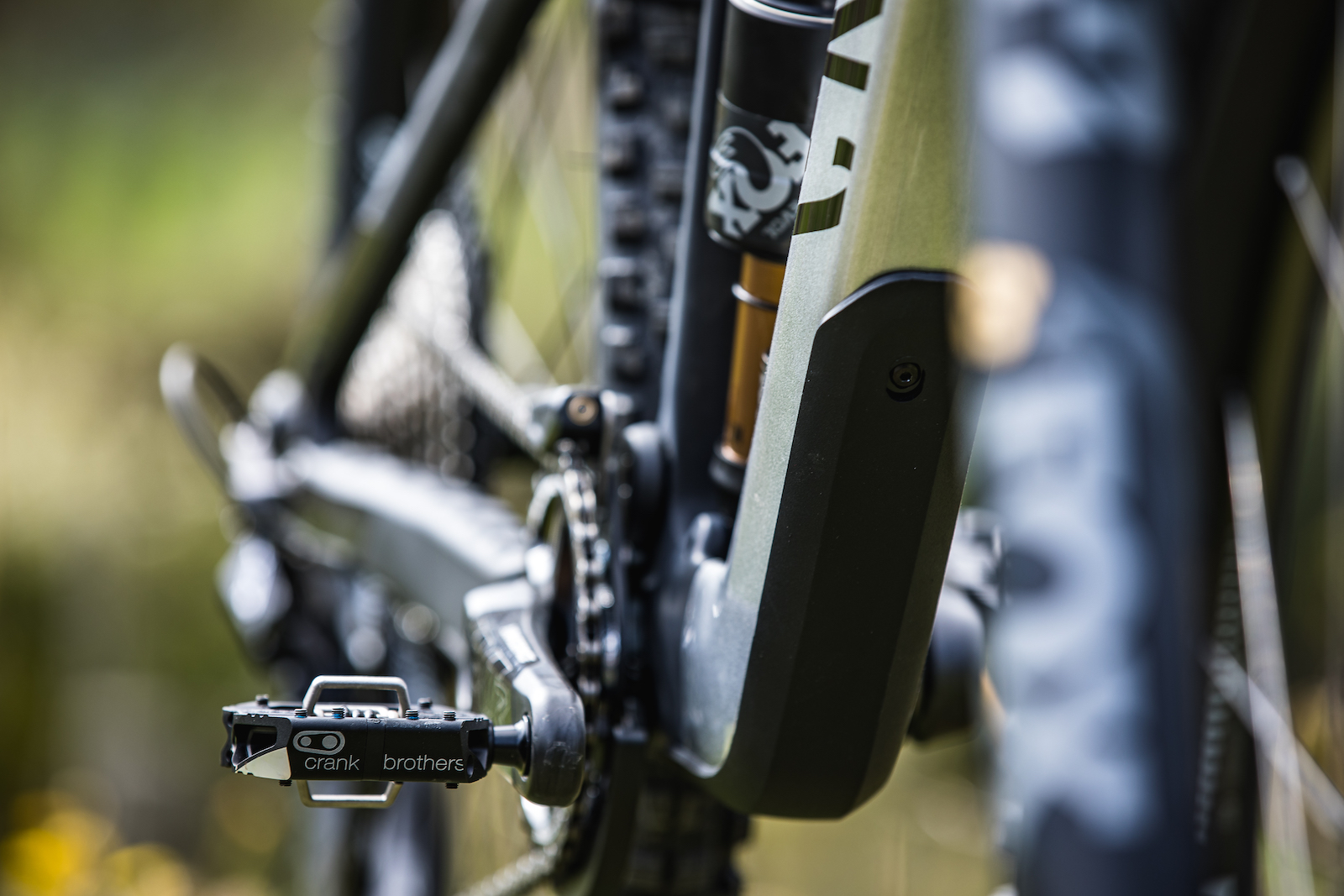 As for the set-up, Canyon has opted for top-quality, effective and reliable components. The fork is a Fox 38 Factory with 170mm of travel, combined with a Float X2 shock also in the Factory version. The Shimano drivetrain has XTR shifter and shifter and XT 10-51 cassette and is combined with a RaceFace NextR carbon crankset and a chain guide with lower bashguard. 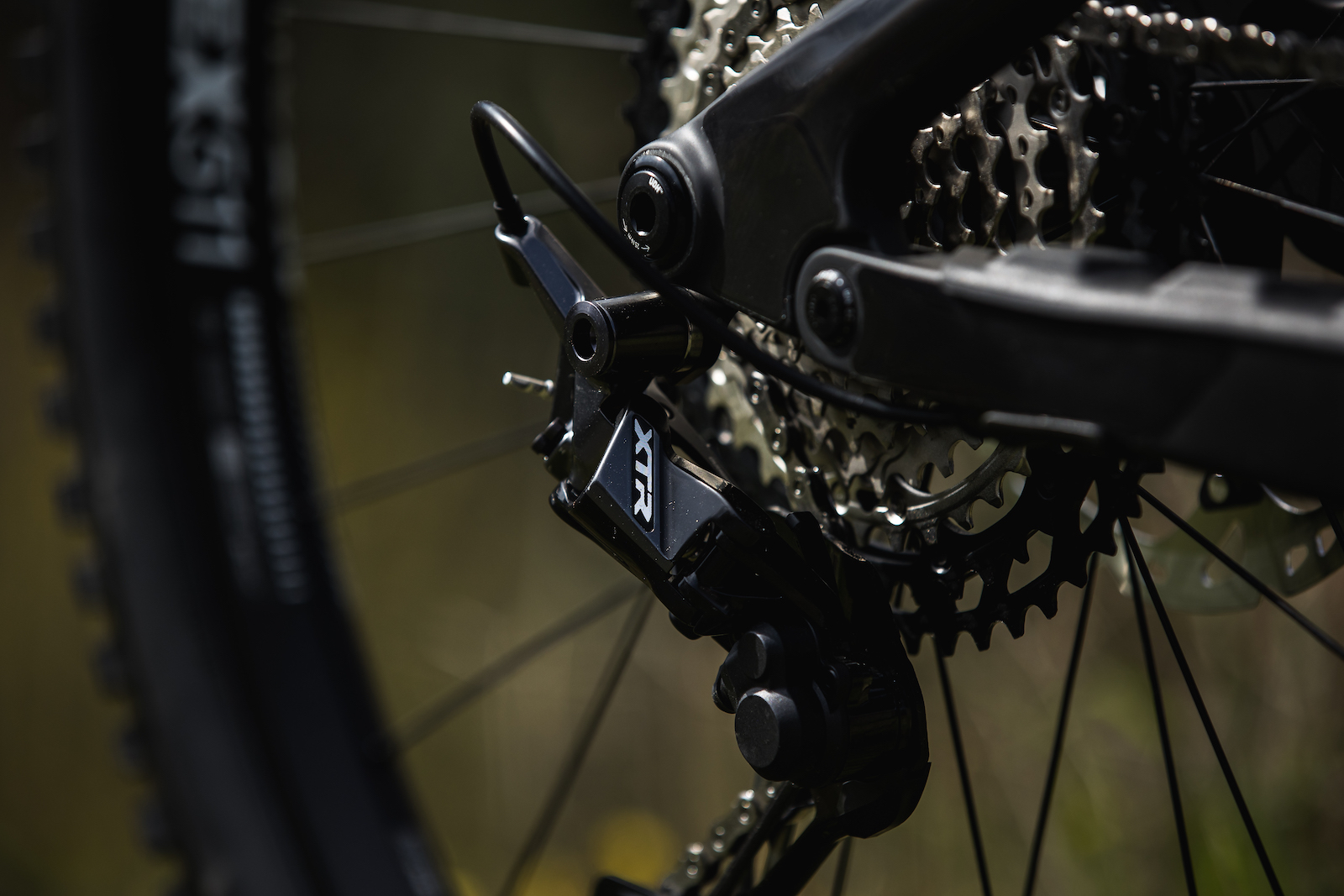 The brakes are Shimano XTR, obviously with 4 pistons. The wheels are DT Swiss EX511 and are mounted tubeless with Maxxis tires, Assegai at the front and Minion DHR II at the rear, both in Maxxgrip compound and EXO + casing. Cockpit and dropper are products from Canyon’s G5 gravity range. 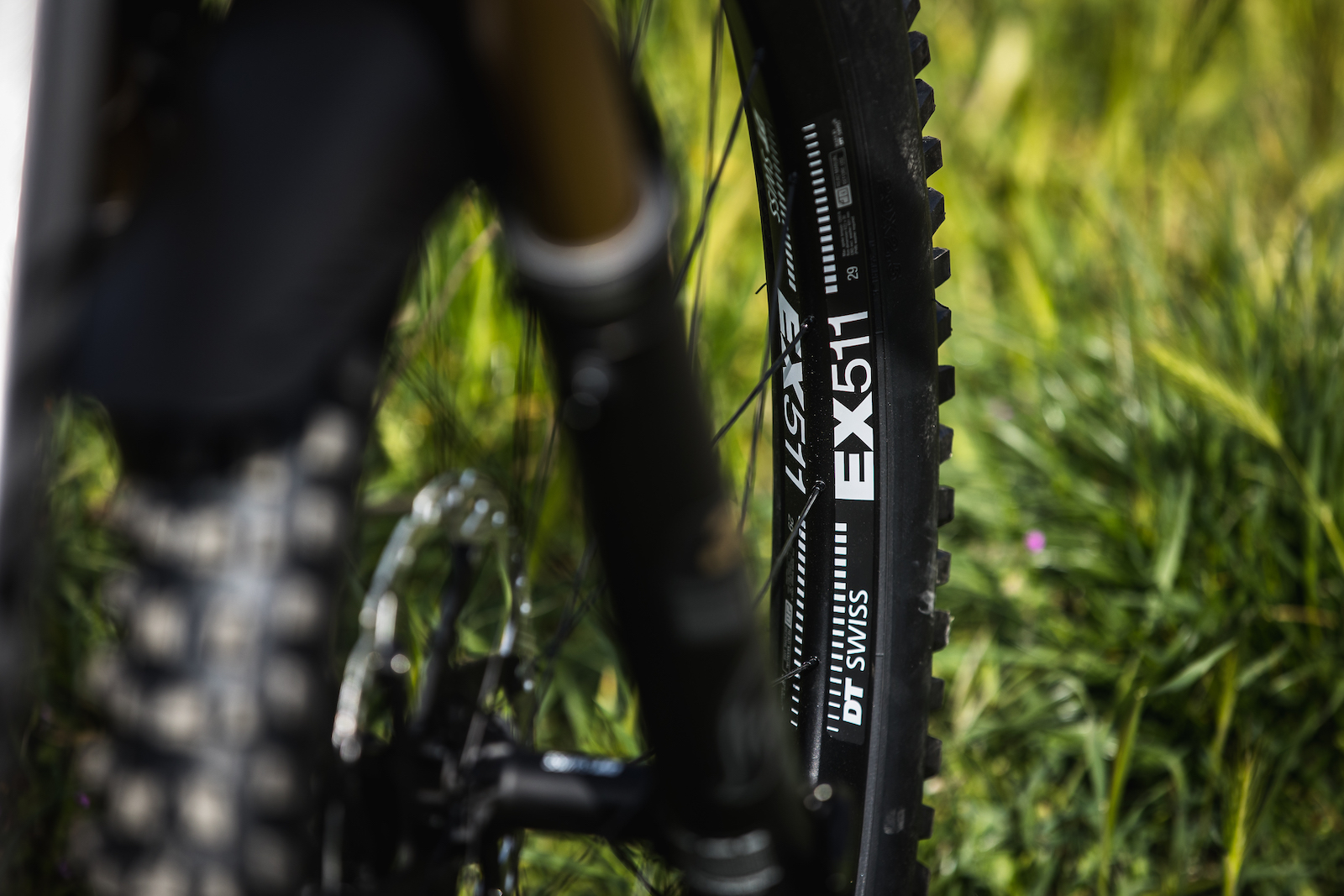 The geometry probably represent the most radical change in the development of the new Strive, precisely because the previous model, in the competitive field, suffered from very conservative numbers. The new Strive, on the other hand, is very aggressive with a steering angle of 63°, an long front-center and a relatively short rear end to improve handling on tighter tracks. The Strive is offered in two versions, each of which is available in two colors, silver and black or gray and orange. For the CFR set-up the price is € 6,299 while for the CFR Underdog set-up the figure drops to € 4,999. 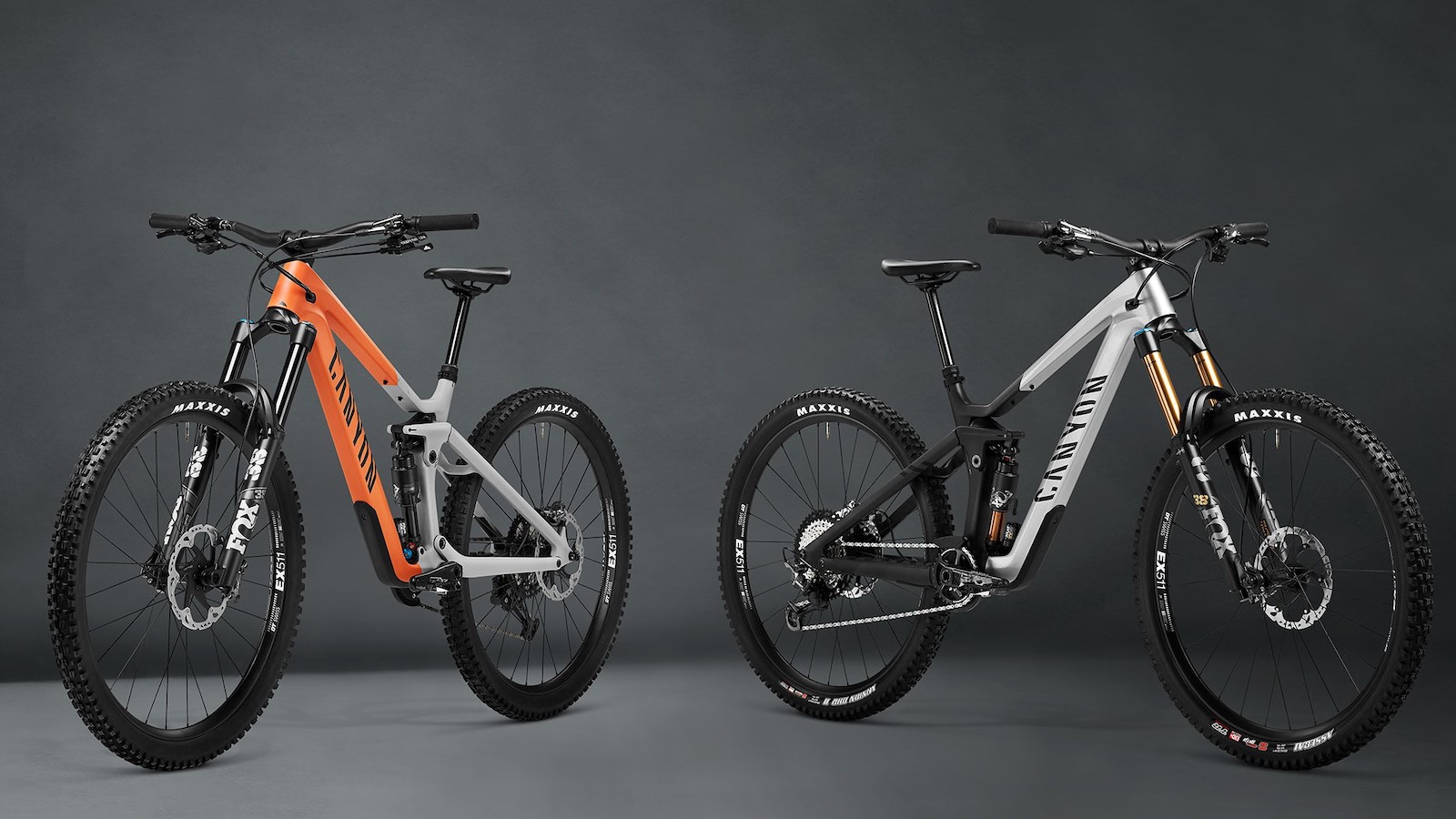 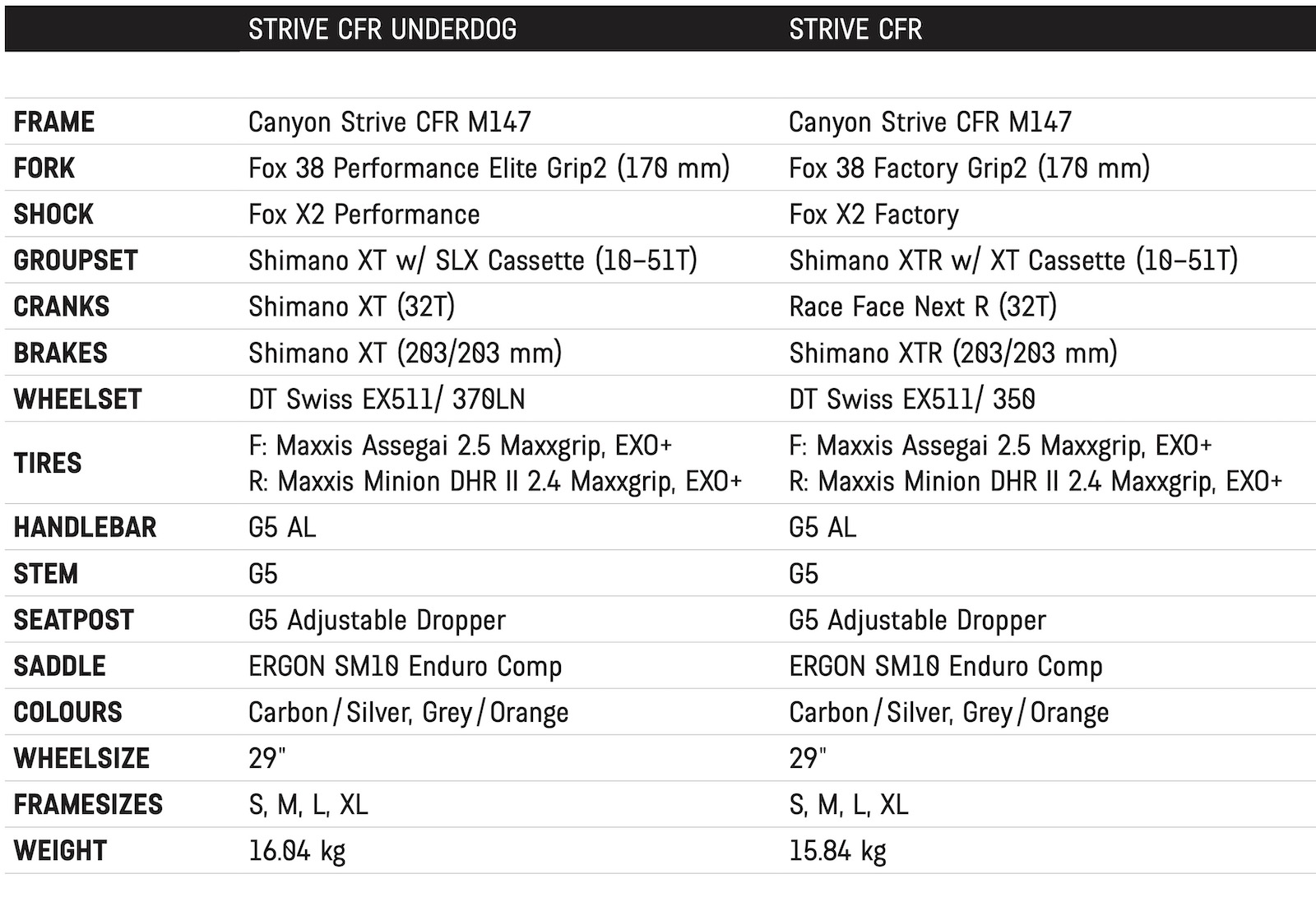