There’s great interest for a comparison between XC forks by the two biggest mountain bike suspensions makers: the Fox 32 Step-Cast and the RockShox SID WC. Both were completely redesigned and showcased in 2016.  They also have both gained the upper hand on XC race tracks, especially the Olympics, thanks to their light weight and most of all to their specs, which makes them the benchmarks for the 100mm segment. 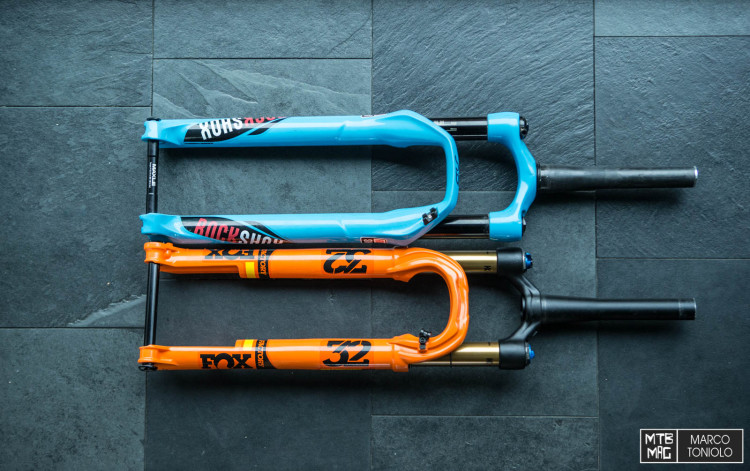 We have tested them individually: here is the Fox 32 test and here is the SID WC test. Unfortunately we only had the Fox 27.5” model to test, but we’ve recently also gotten ahold of the 29’er to mount on our long term Focus Raven Max for a more precise comparison. The only difference between the two products is the length of the axle: the FOX 32 SC is Boost, so it has a 110mm axle, while the SID WC has the classic 100mm axle.

In this first article we’ll be making a static analysis. 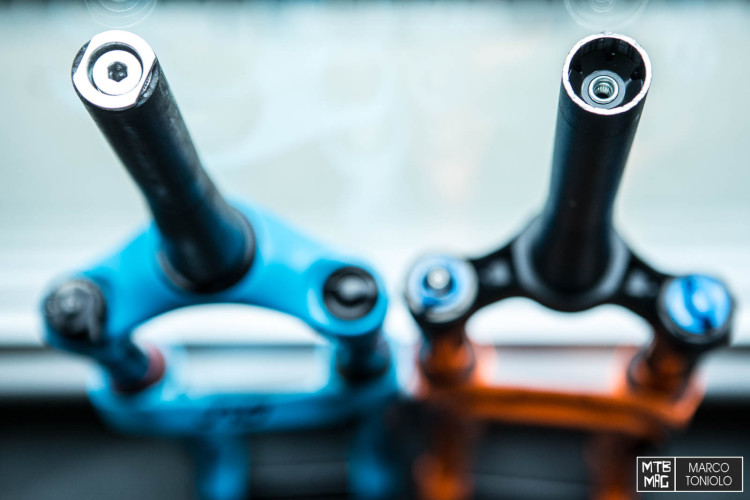 Let’s start with what XC riders care the most about: weight. We have to say we declared an incorrect weight in the SID test initially.  Here are our final weights.

While the height is the same, it is interesting to point out(as noticeable from the picture below) the difference in width of the two forks. Even though the FOX 32 is Boost, it is 1cm narrower than the SID if measured from leg to leg. This is achieved thanks to the Step-Cast, which are the indentations right above the dropouts; they create space for the disc and the spokes. The idea, according to Fox, is to increase stiffness using a smaller brace, and decrease weight using less material. 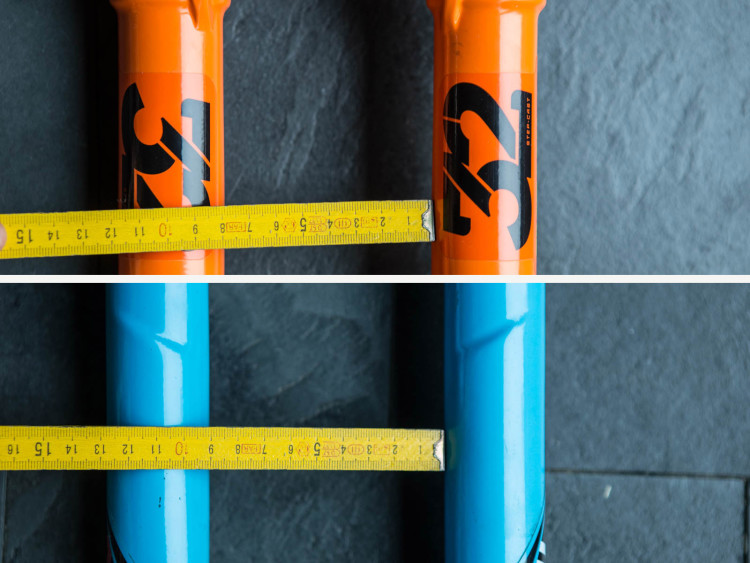 Both forks have a tapered steerer, 32mm diameter stanchions, and are set up for 160mm post-mount disc brakes. The SID WC has a carbon fiber crown and steerer, while those of the Fox are made of magnesium and aluminum respectively. 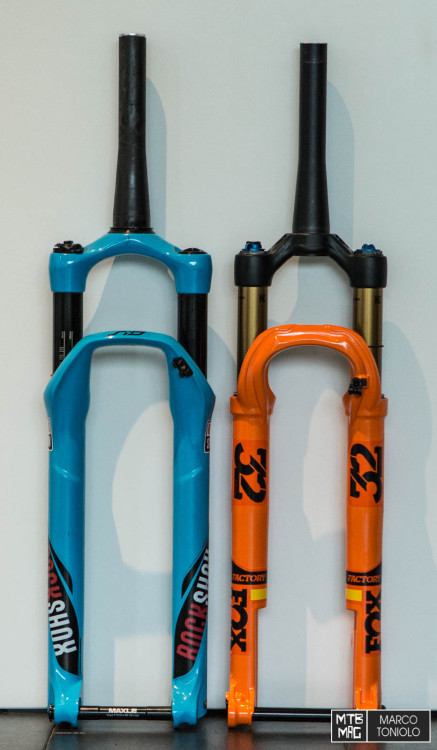 Both forks have bolt on thru axles with no quick release. 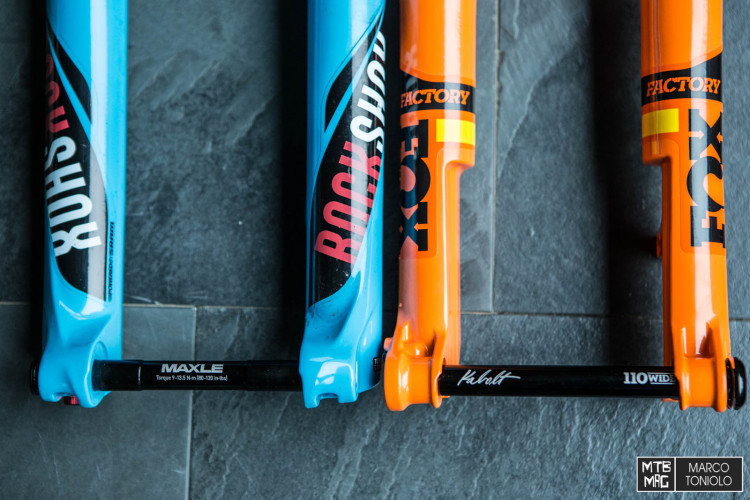 The SID has the following damping adjustments: beginning stroke rebound (the rest of the travel is regulated by the factory pre-set Rapid Recovery), low speed compression and lock/unlock, also from remote. The volume of the air chamber can be adjusted using the Bottomless Tokens.  By adding or removing volume reducers inside the air chamber, progressivity can be adjusted according to one’s preferences. The SID uses the Solo Air spring.

The blue lever of the Fox 32 allows the classic 3 adjustments: firm (lockout), medium and open. In the open position,  you can externally fine tune 22 clicks that regulate the compression at low speed. With the Fox, progressivity can also be customized by adding spacers inside the left stanchion after having removed the air pressure and the blue cap. 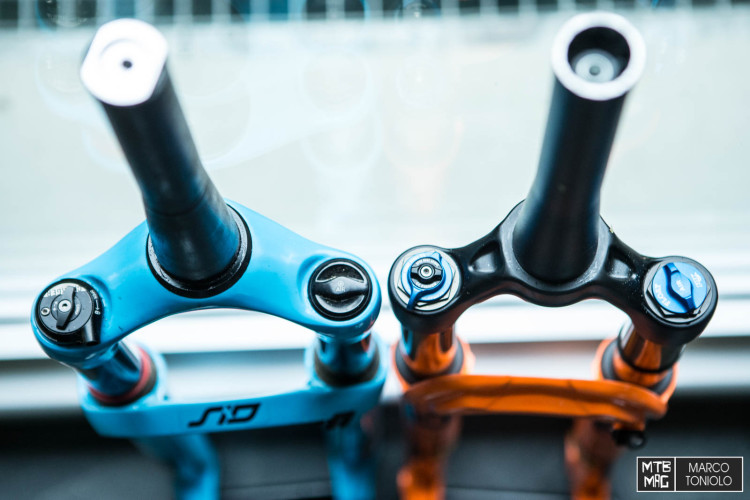 Both Fox and RockShox offer a handlebar remote to lock the fork.

For the description of the hydraulics, check out the individual articles in which the topic has been explained in details.
Fox 32 SC
RockShox SID WC

Stay tuned for the on-trail test! 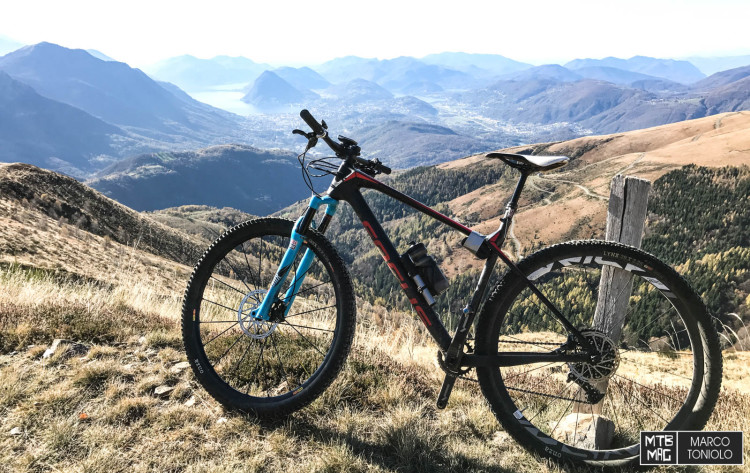 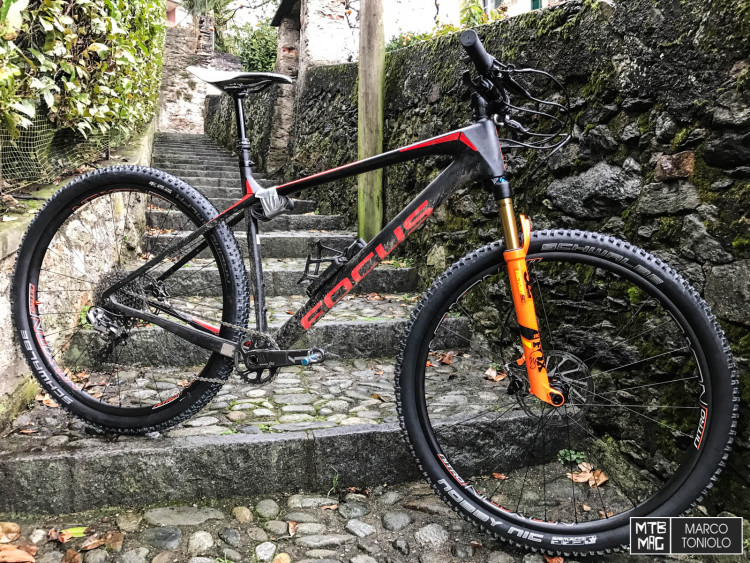