With nasty weather moving in at a threatening pace from West of the venue, Red Bull Rampage moved the go time up by half an hour at the last minute in hopes of avoiding the high winds coming along with  the approaching storm. Most riders got their lines buttoned up at the very last minute and this year saw substantially less practice time than usual. With that in mind, the final went surprisingly smoothly. Here’s a recap of the day… 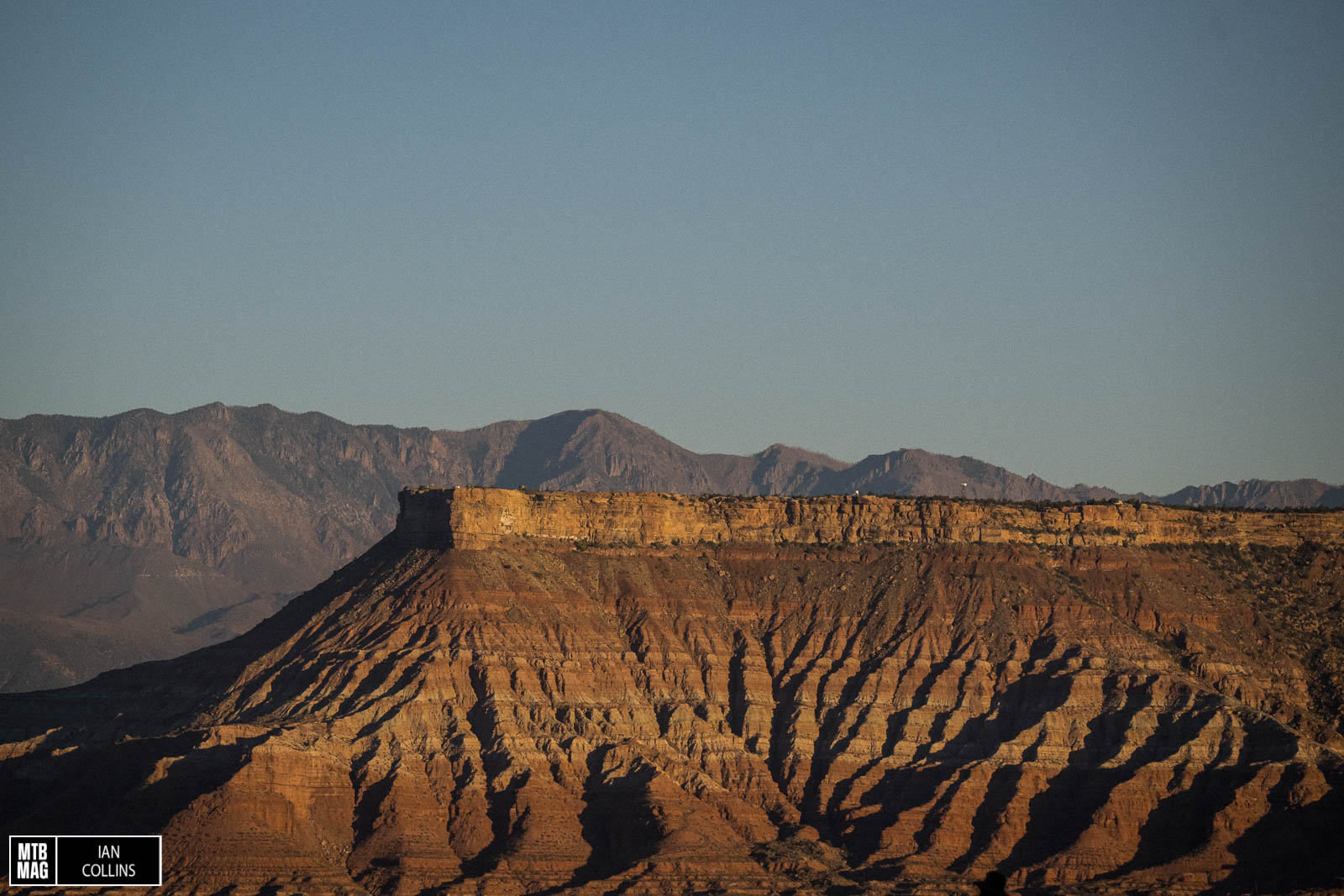 Morning starting off quite nicely… 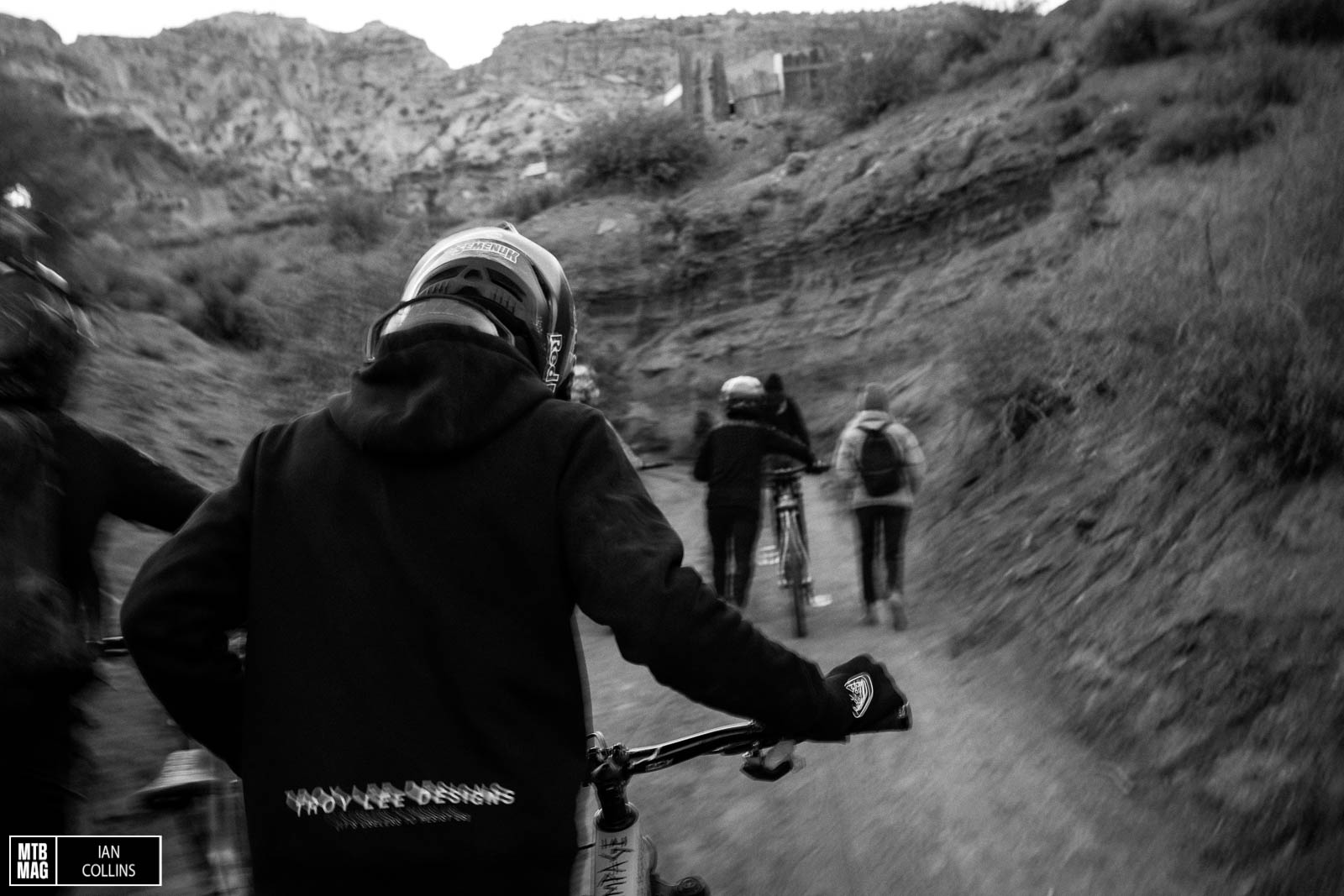 The morning of finals is always a bit rough. Riders need to get into the zone substantially earlier than the prior days, so they can get some last minute practice time in. 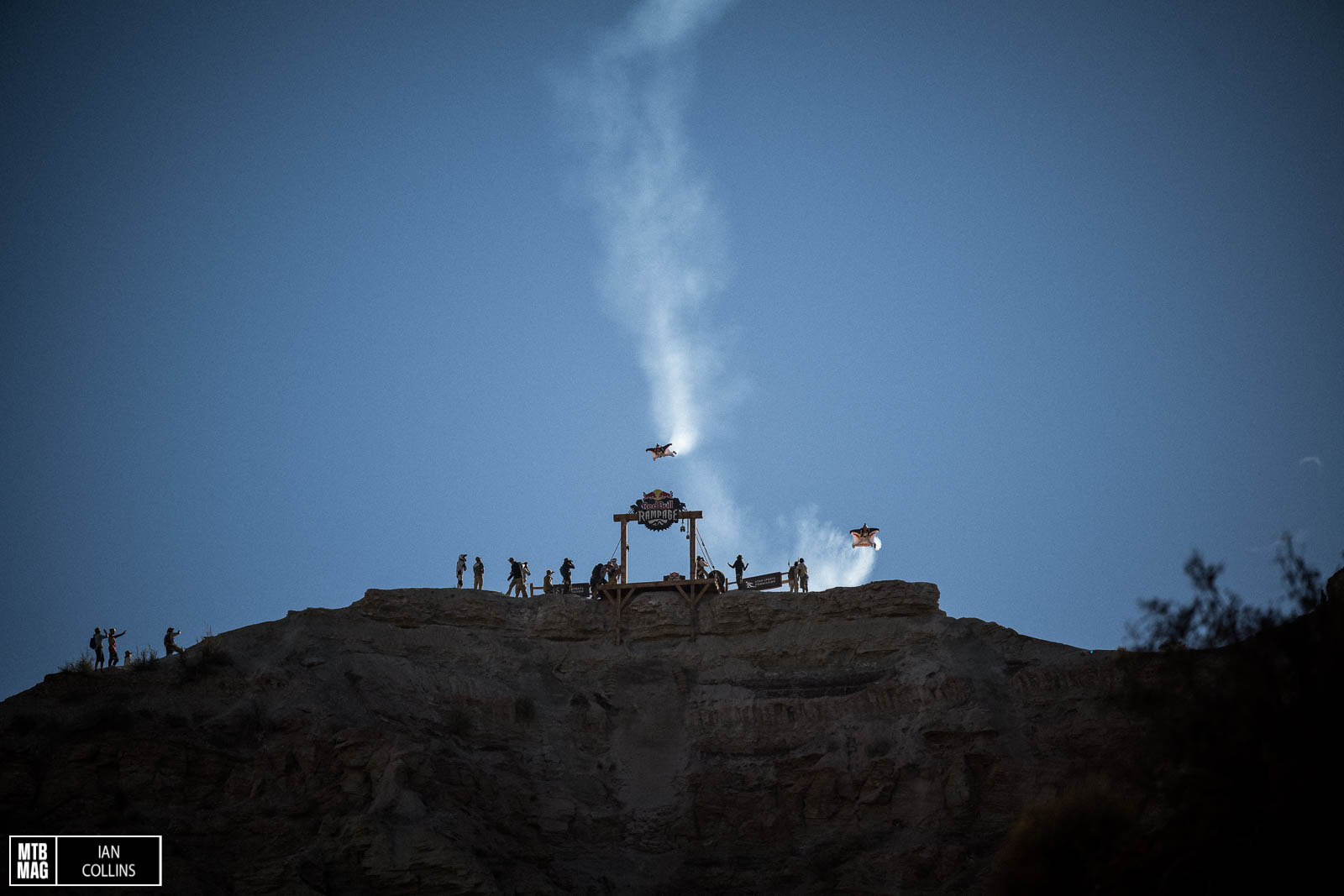 Red Bull wing suit divers are crazy. Heli drop to skimming over the start gate with a few feet to spare. No thanks – we’ll stick to biking. 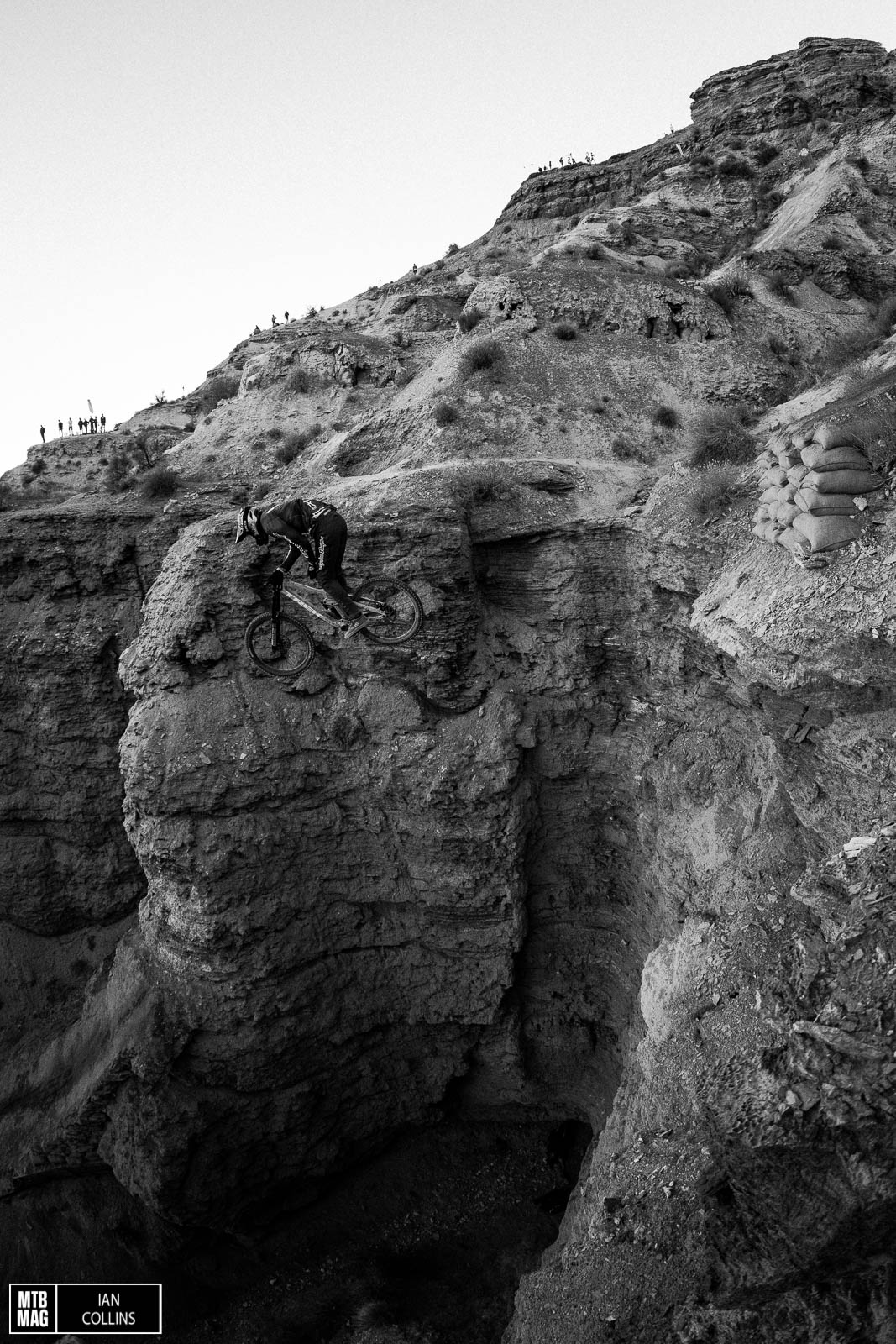 Barspins on death gaps for breakfeast. Semenuk slipped a gnarly one in during the morning practice while *almost* no one was around. He actually says that this was far sketchier than his caveman out of the start gate – largely due to the downhill takeoff. The actual quote was “nothing like starting starting your day with a video part ender”… 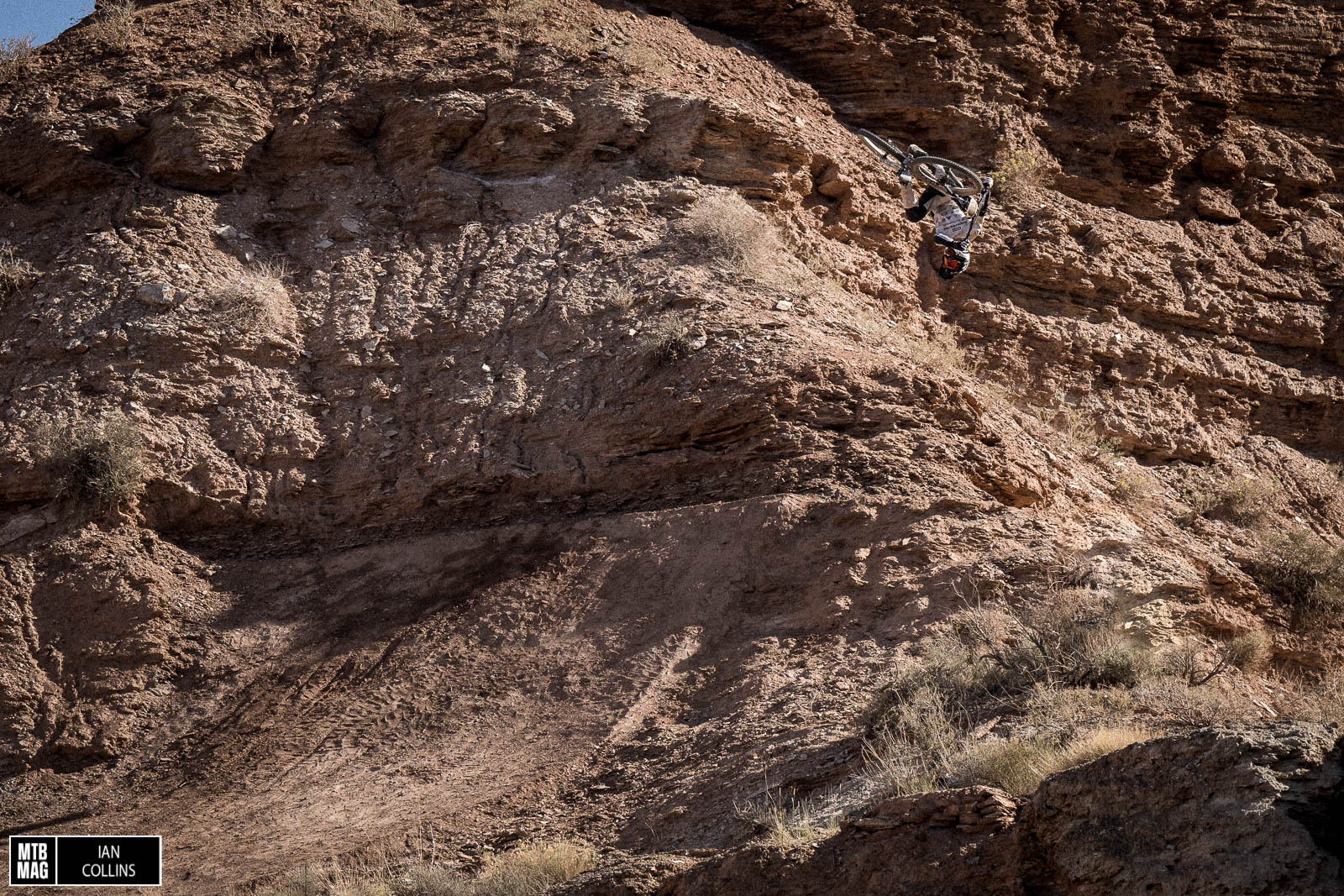 Rampage newcomer William Robert kicked things off with a truly excellent run that he should be proud of, nailing down all of the tricks he wanted – like this spin above. 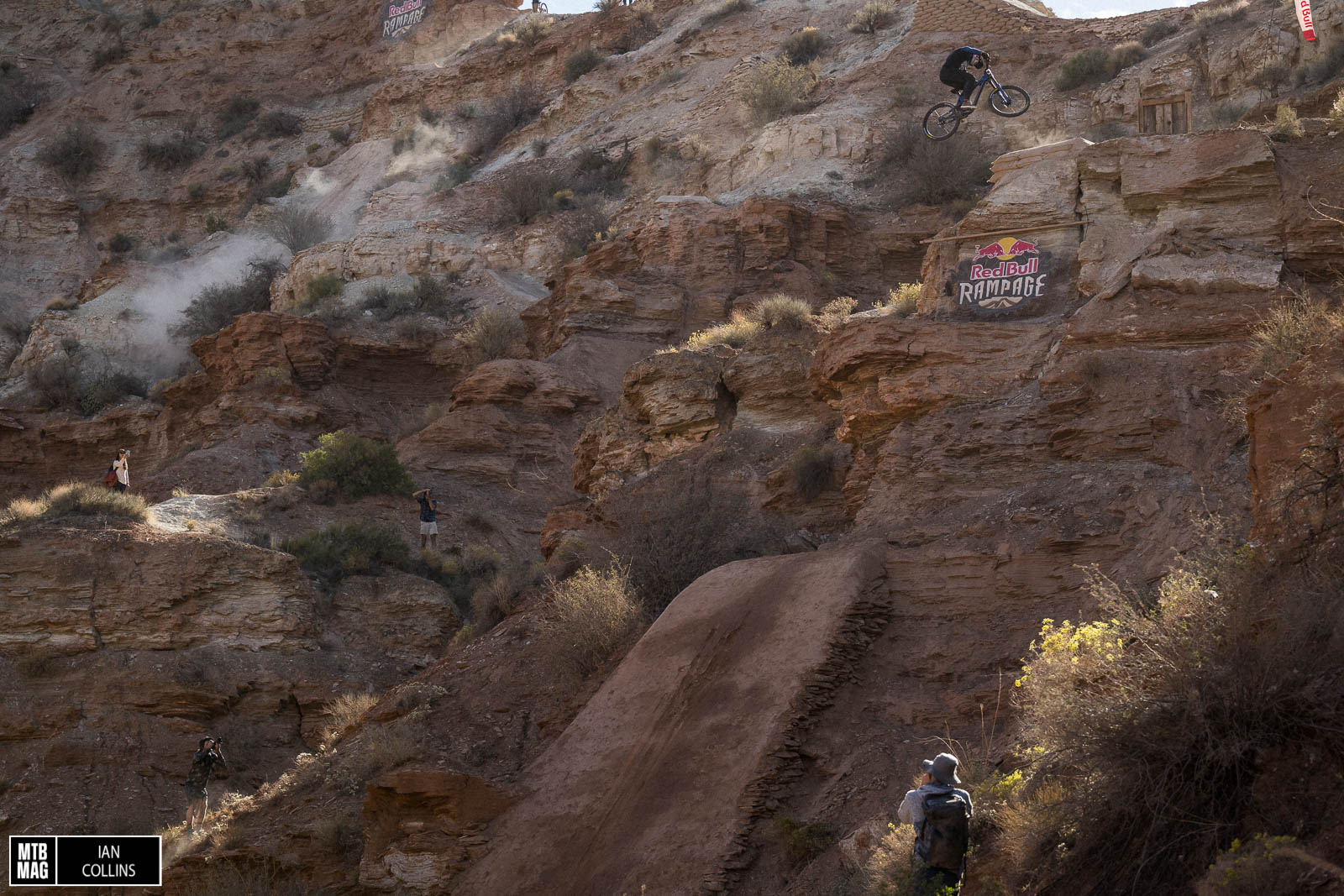 Speaking of spins, you can always count on Carson Storch to 360 a big drop. He also 360’d the drop just before this and laid down a solid run that put him just a tick outside the top five. 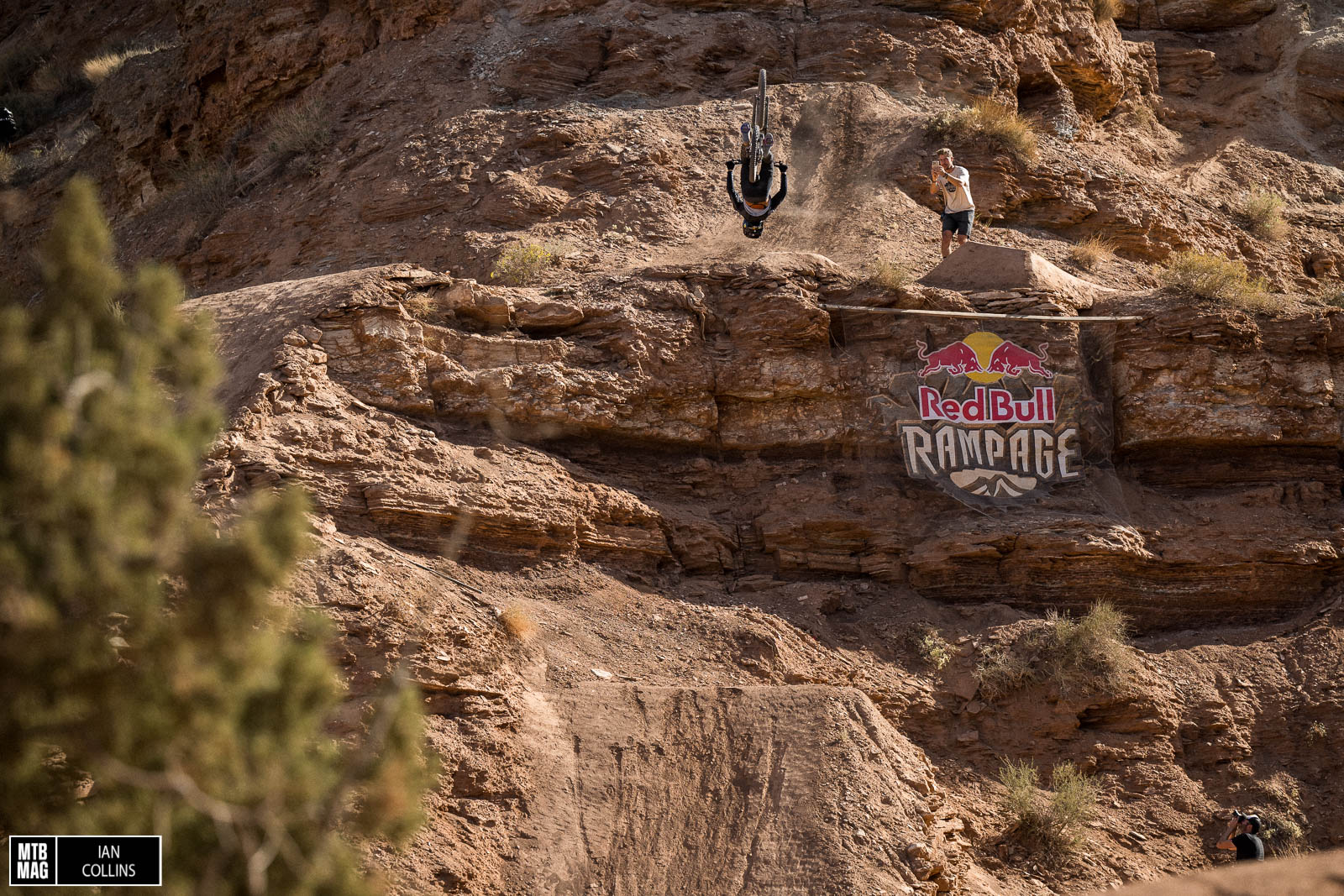 Lacondeguy was on a savage mission with flips, spins and an insane 360 Indian air. He landed in 8th place. 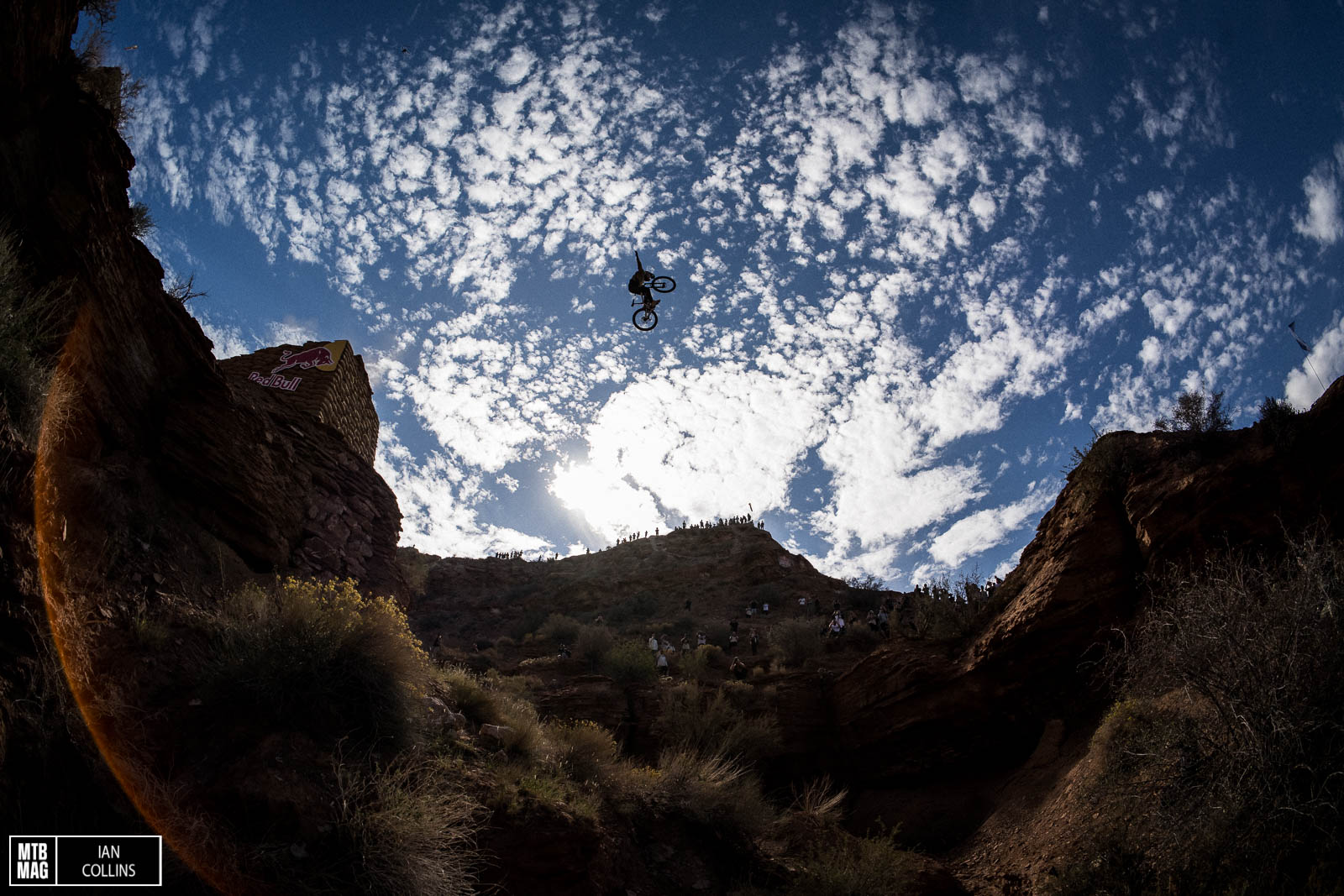 Dylan Stark was another newcomer that impressed everyone. He took the rider’s right ridgeline and threw down a stretched tuck suicide no hander on the 75 foot canyon gap. Speaking of first time Rampage attendees, Alex Volokov had an unfortunate crash that took him out on the morning of finals. This was particularly devastating because he has been absolutely charging all week and making a mark. We wish him a speedy recovery. 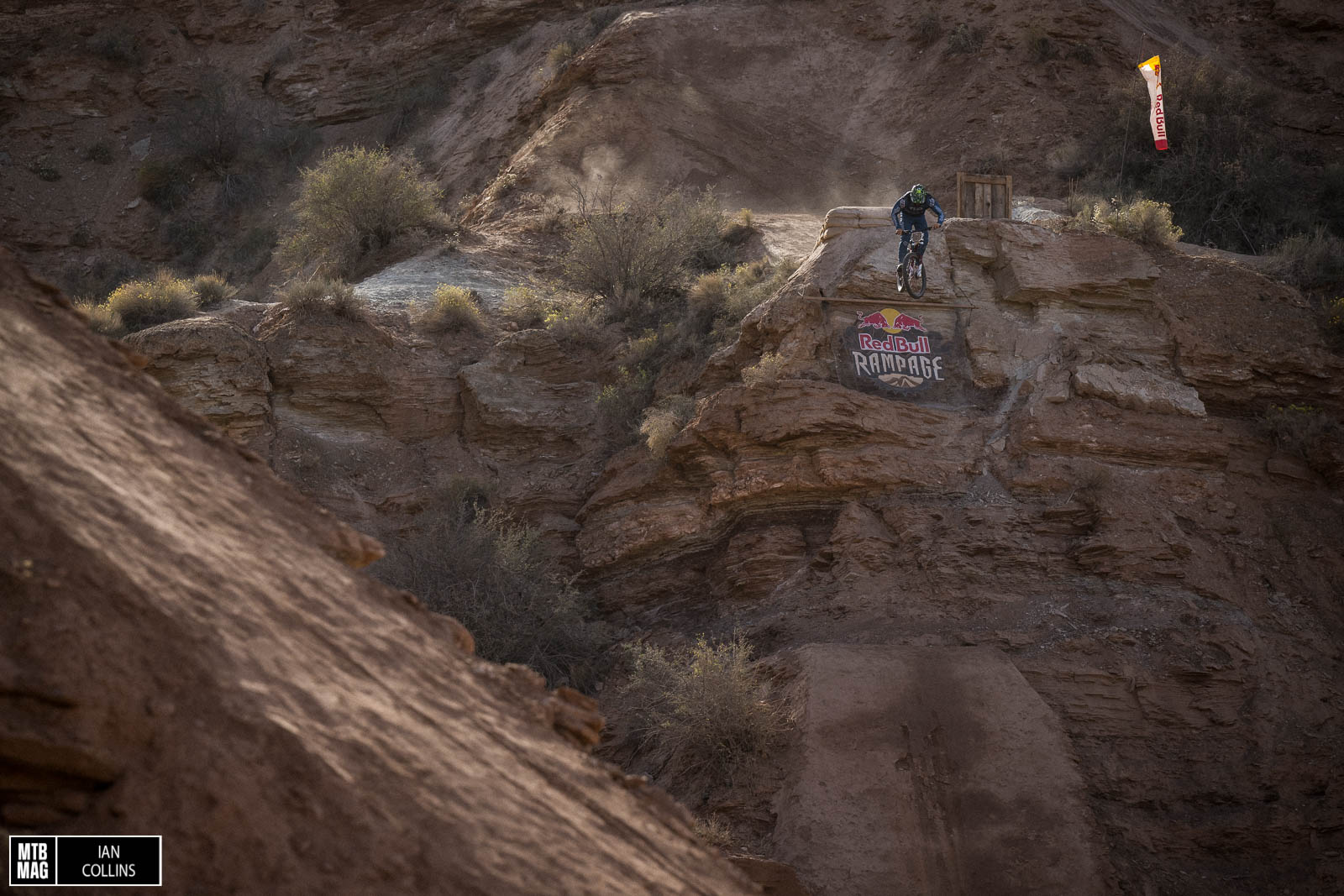 After suffering one of the worst crashes in Rampage history last year, Tom Van Steenbergen pulled off an incredible recovery and got back in the game this year. Everyone was happy that he exercised restraint and rode relatively conservatively and just had fun while getting down the hill safely. 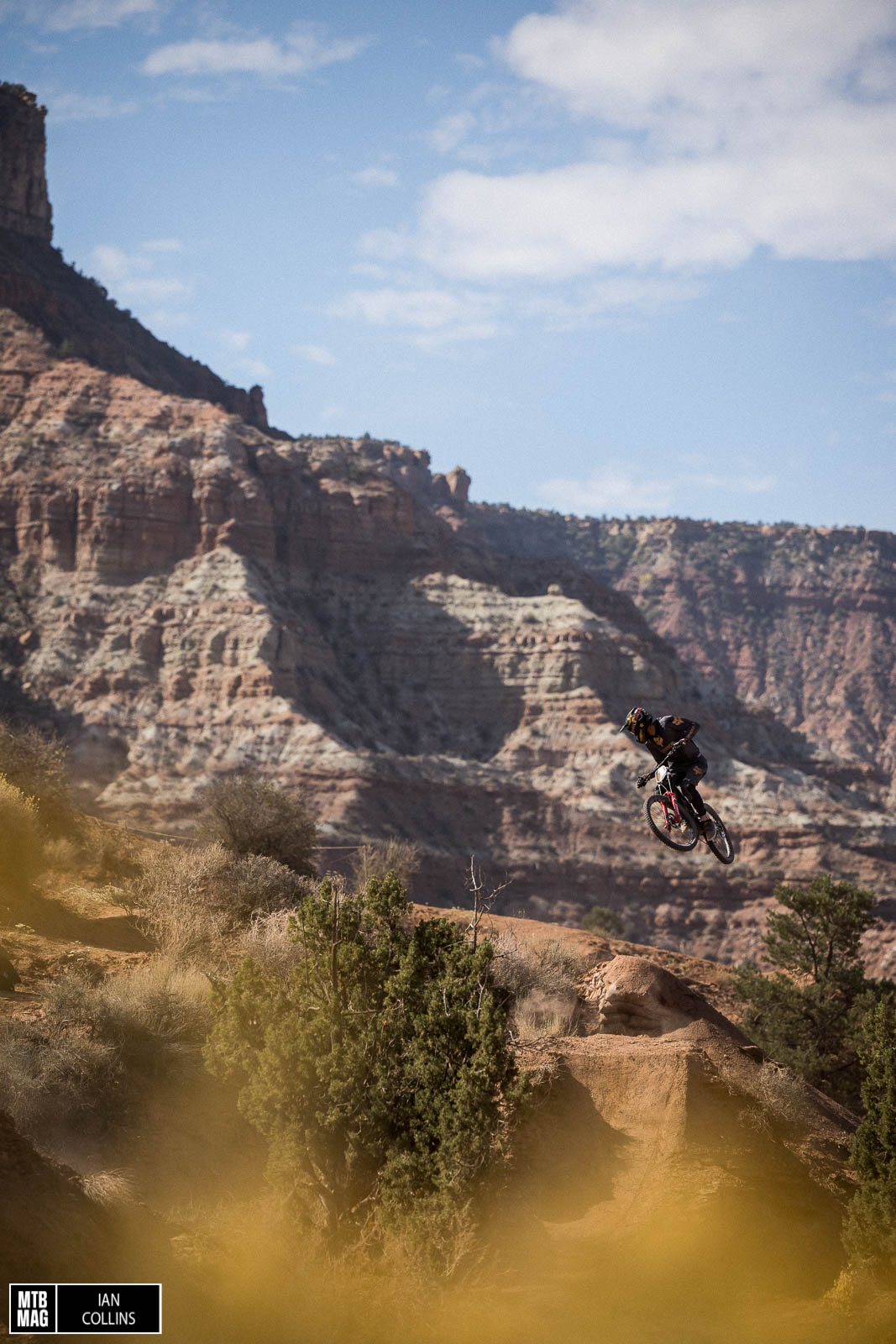 Another rider who’s been generating buzz all week was DJ Brandt. He’s been riding like a boss all week but had a bobble in his run. Here he is with a 450 on a hip toward the end of the course. 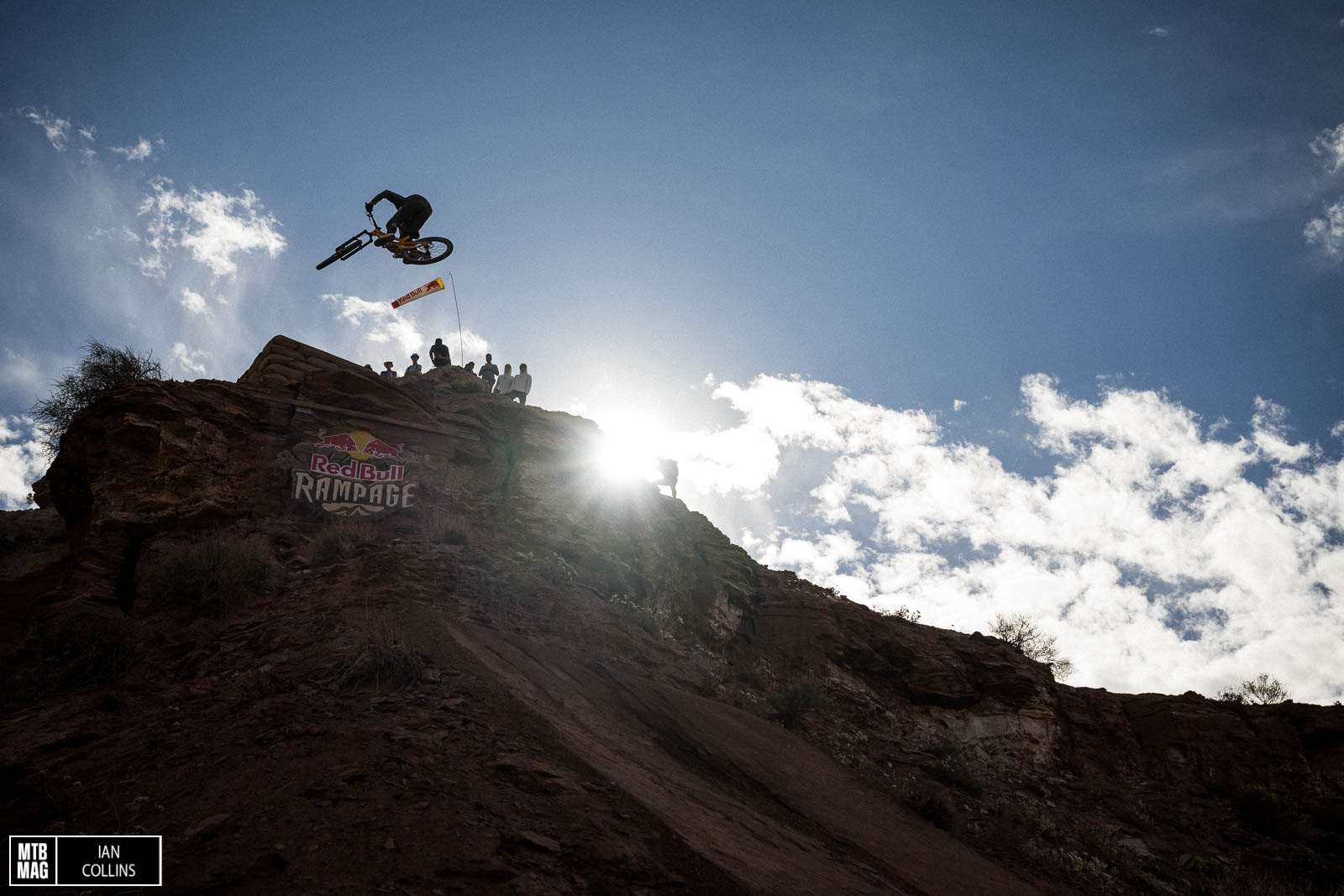 Brett Rheeder threw down an absolutely insane run and deserved to win fair and square. It was packed with tricks top to bottom, and he had a couple of very large features for good measure. 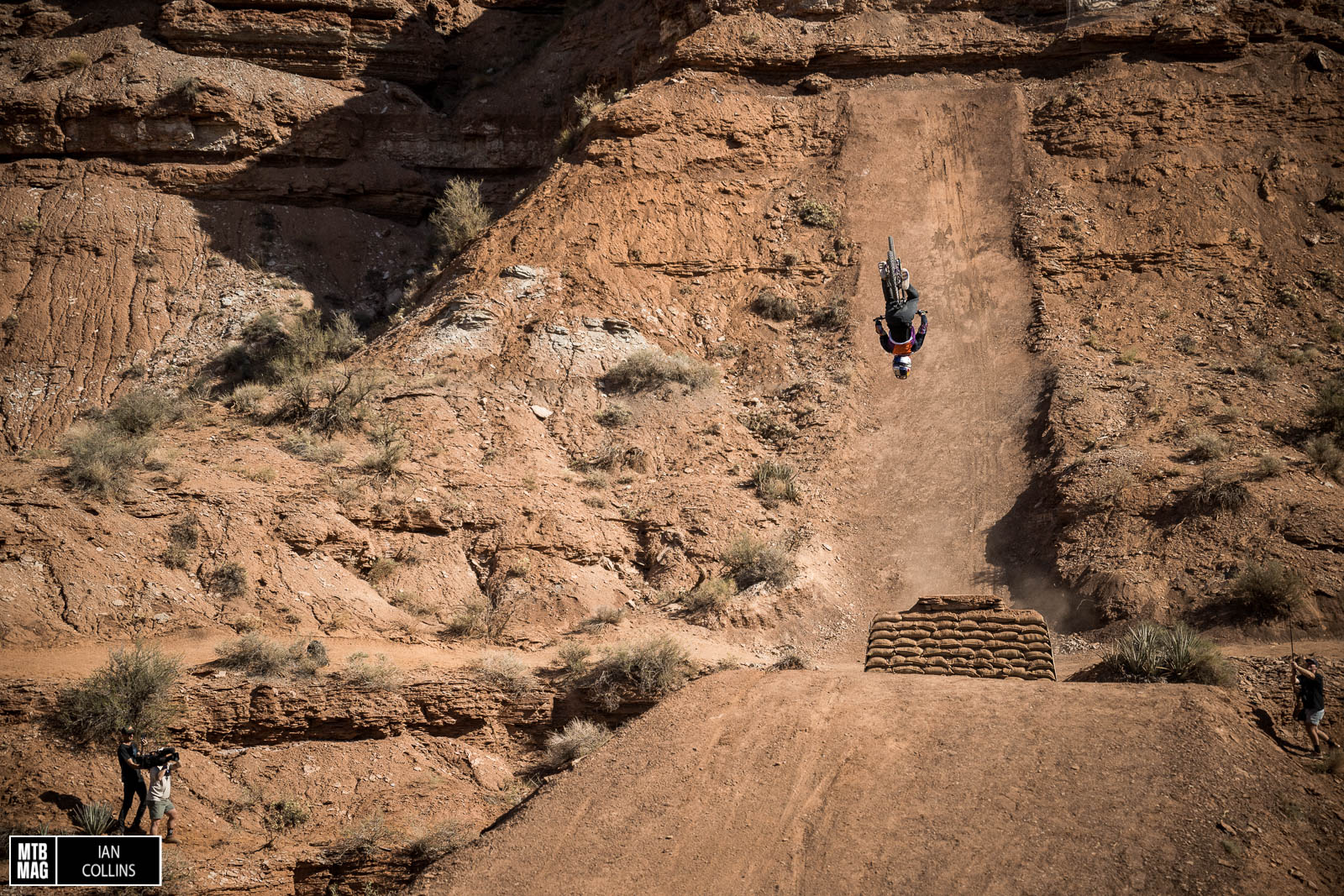 Szymon Godziek is an absolute psycho. He mini-flipped, 360’d a double drop, then backflipped the 75′ canyon gap back to back to back in a wildly entertaining run. 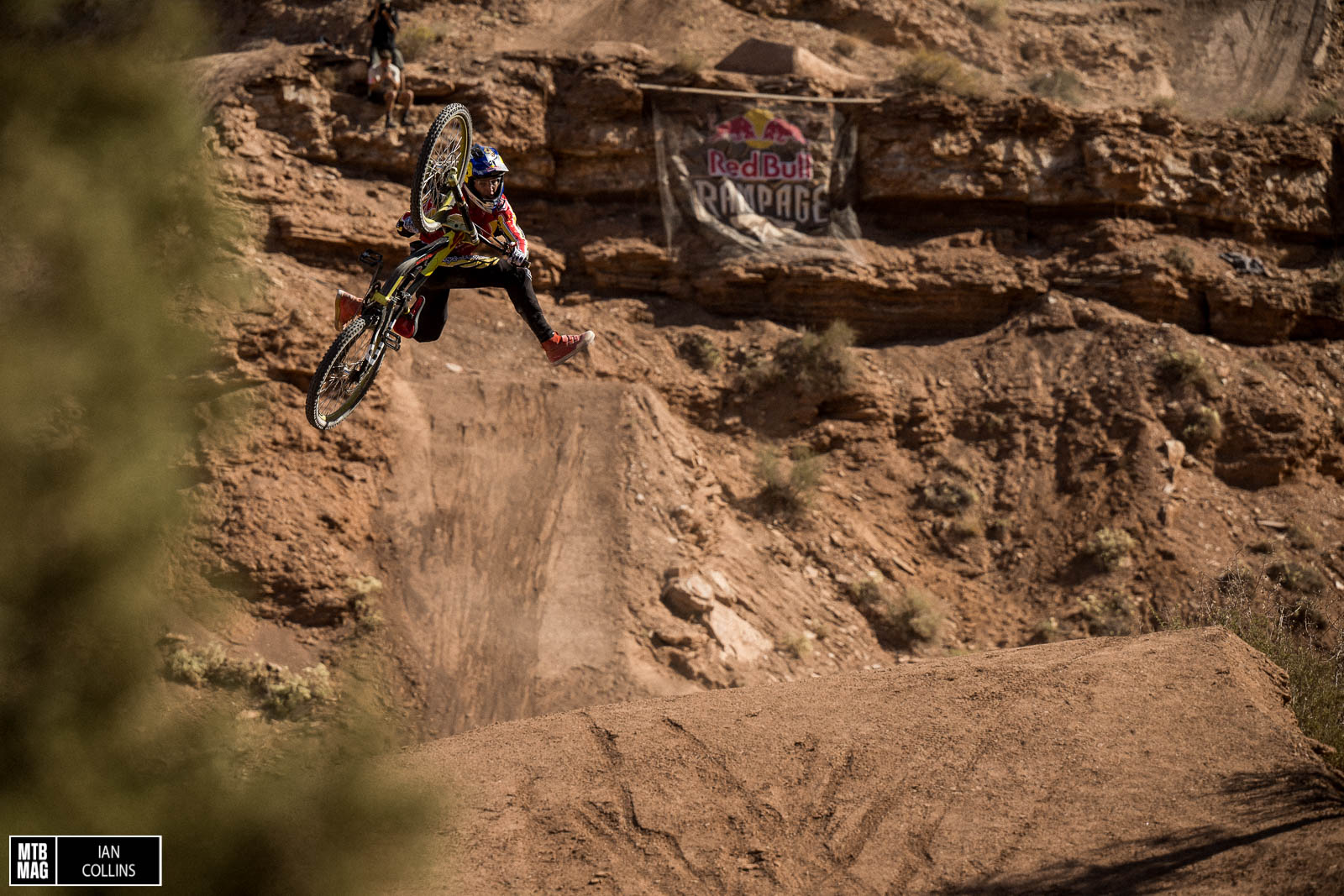 Local boy Jaxson Riddle brought his signature FMX inspired style to the course and stoked the crowd out in a big way, even if it didn’t result in a super high scoring run. 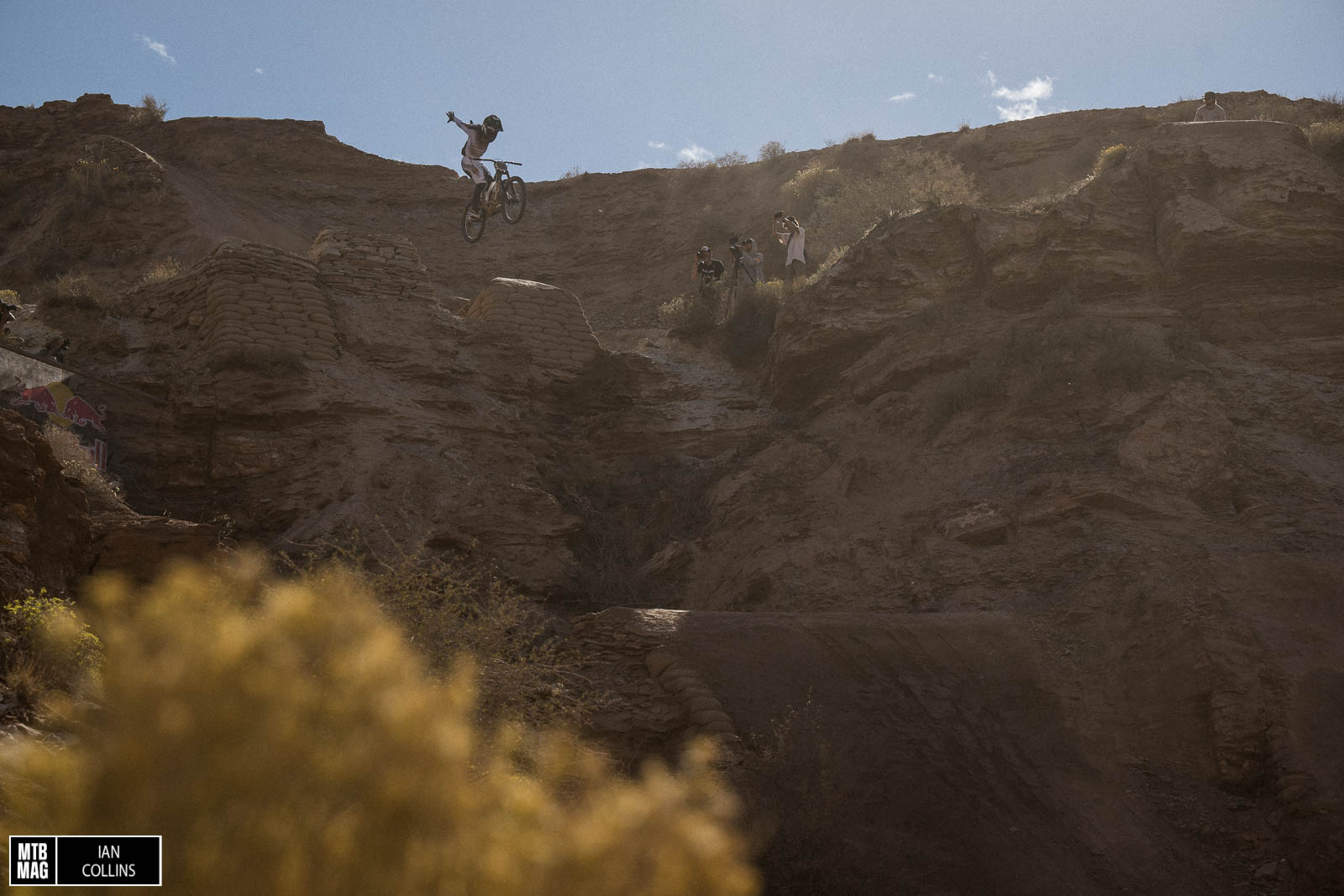 Another local, Ethan Nell ended up with a solid run but didn’t pull out any big guns like last year’s backflip double drop. He kept it slightly “safe” with a big suicide no hander on the lower drop. 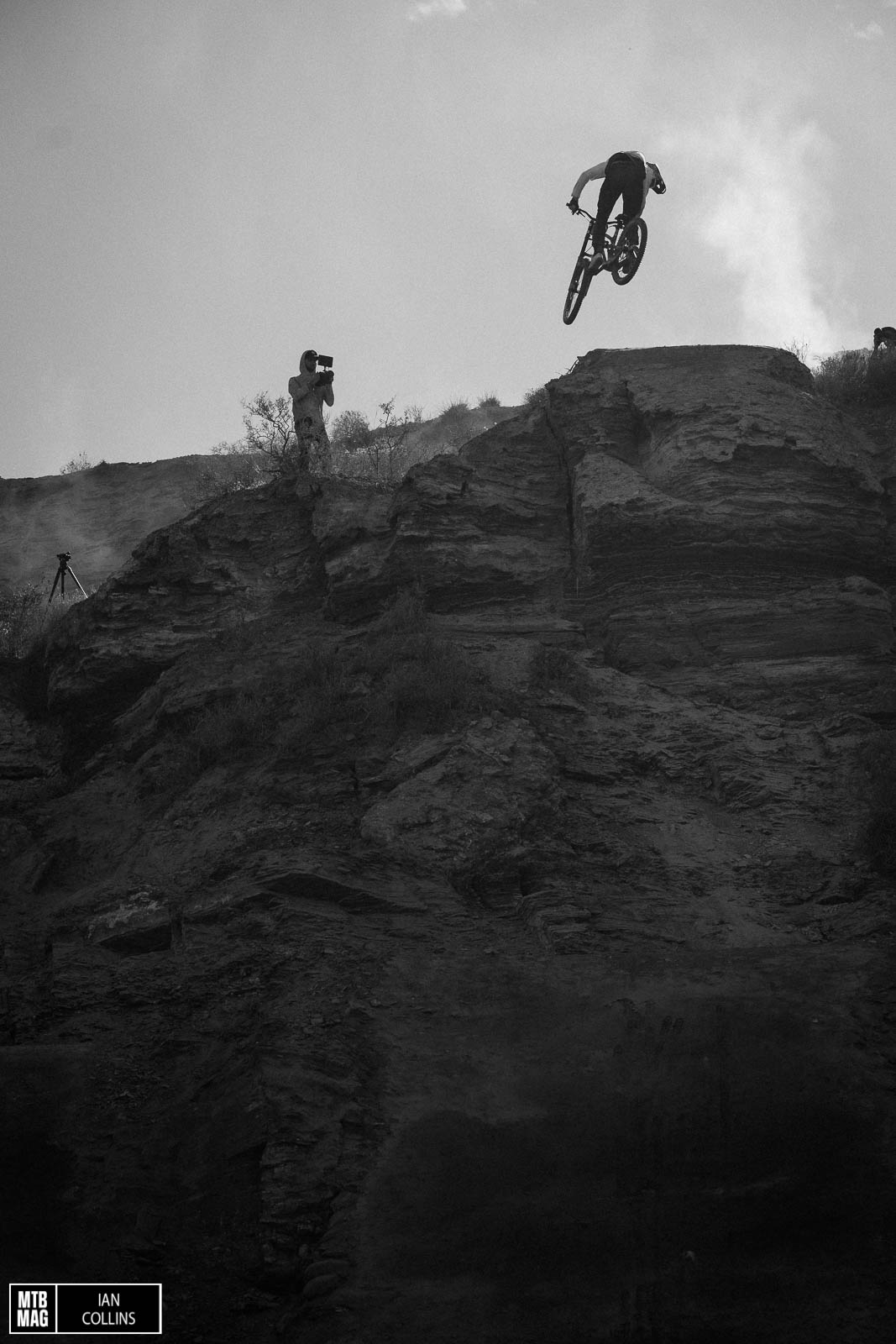 On the topic of the lower drop – no one went bigger than Tommy G. This was one of the biggest spins on the hill and it helped land him in 5th place. 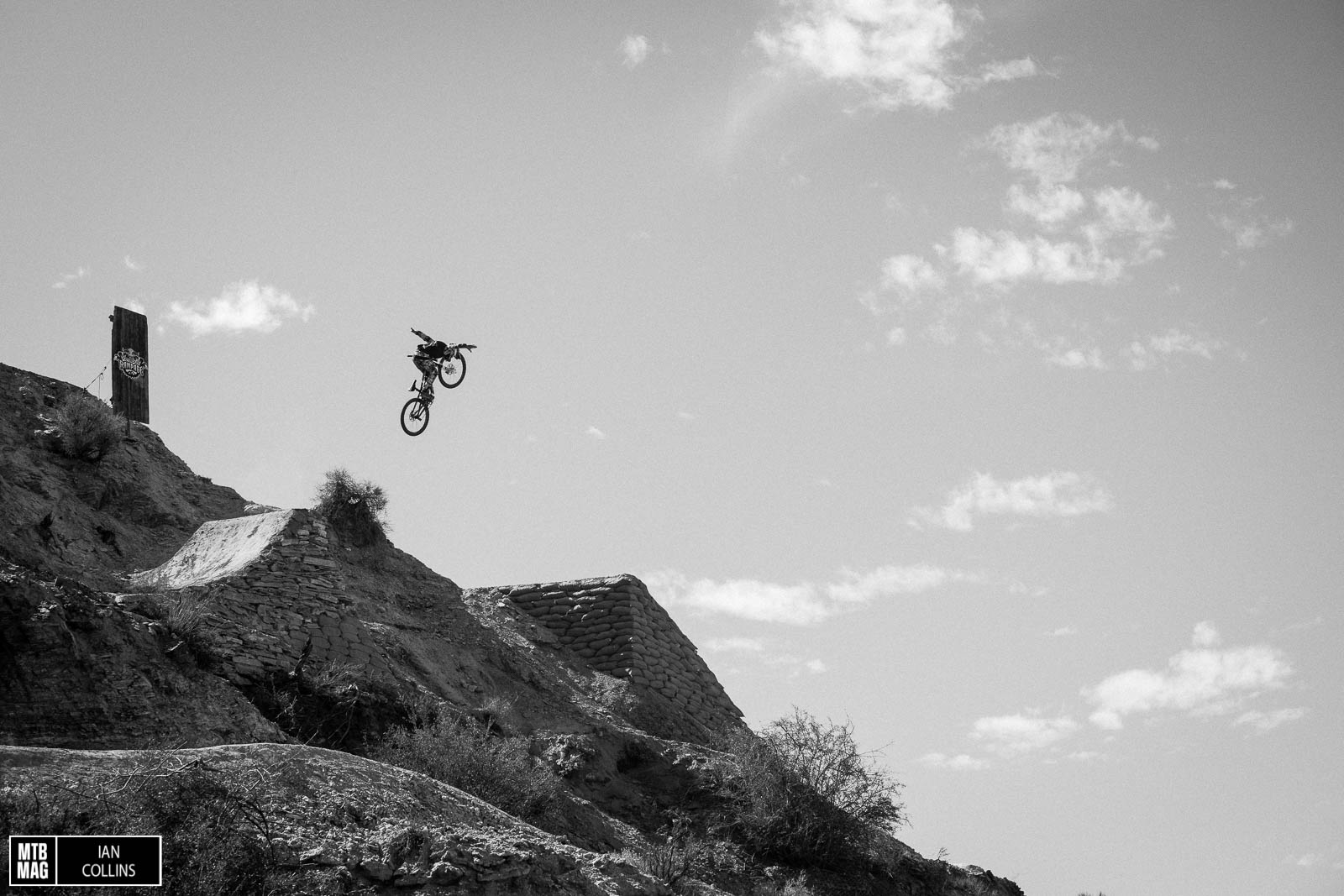 Reed Boggs landed in 4th place with a super impressive run, following up his podium finish last year. He tossed this suicide no hander on an exposed ridgeline jump then followed it up with a 360 drop that went directly into a huge drop that he backflipped. Dialed as always. 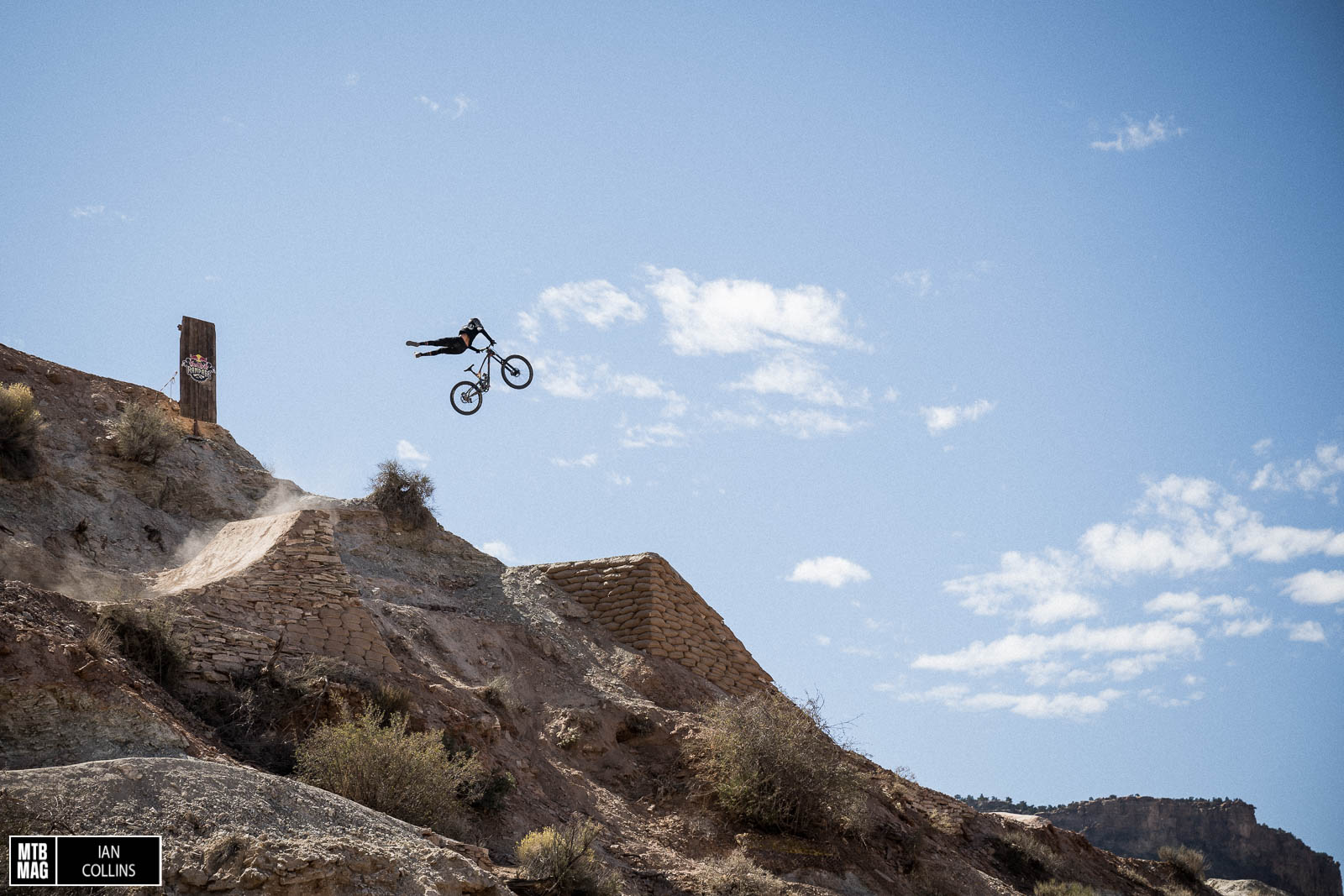 Sorge with a big super can on the same ridgeline jump. He laid down a solid run and wound up in 7th, dashing his hopes of tying Semenuk with four notches in the belt. 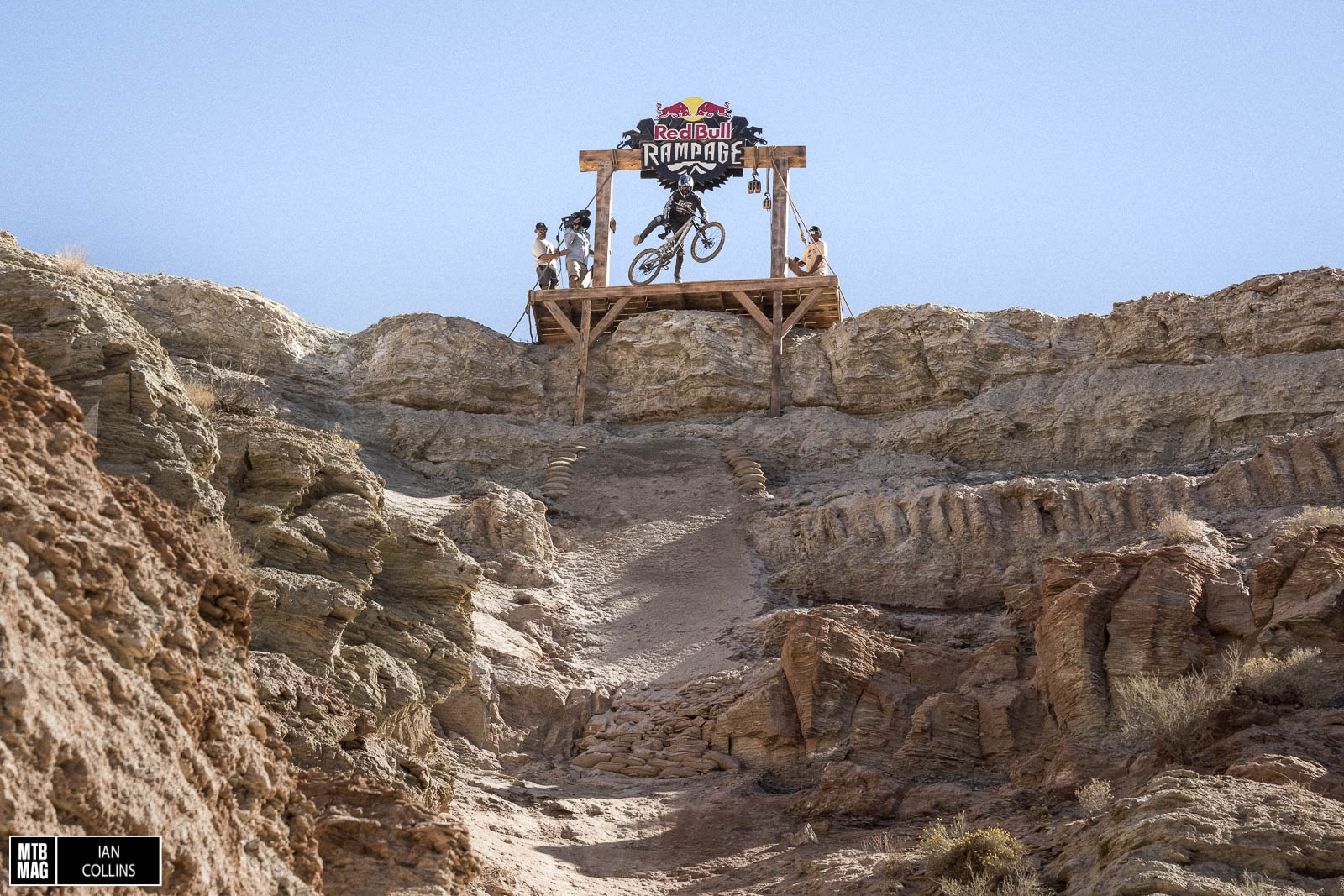 It all came down to the Don, who was the only rider in Rampage history to drop right into the heart of the course out of the center of the start gate. His caveman went right into an ultra steep landing pad for a double drop into a massive chute. This and a handful of other big tricks weren’t enough to best Rheeder or Godziek and he ended up in third place.

With mega heavy wind picking up in the afternoon, the call was made to skip second runs entirely. This was unfortunate for Tyler McCaul in particular who had a pretty decent sized bobble and didn’t get the run he hand in mind…There is always next year. 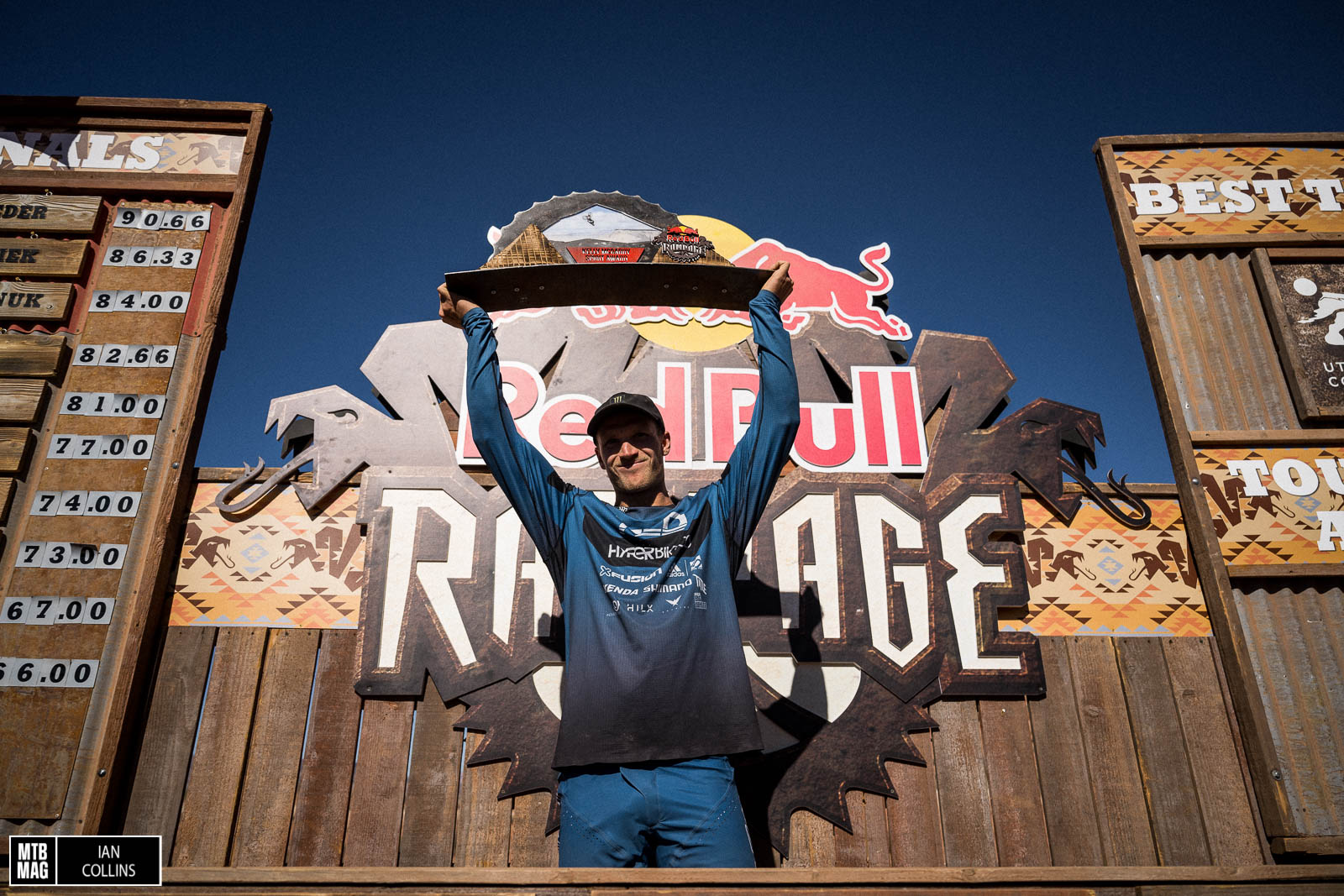 Tom Van Steenbergen landed himself the Kelly McGarry spirit award and there was little doubt that he earned it. We are happy to see him back and riding smart. 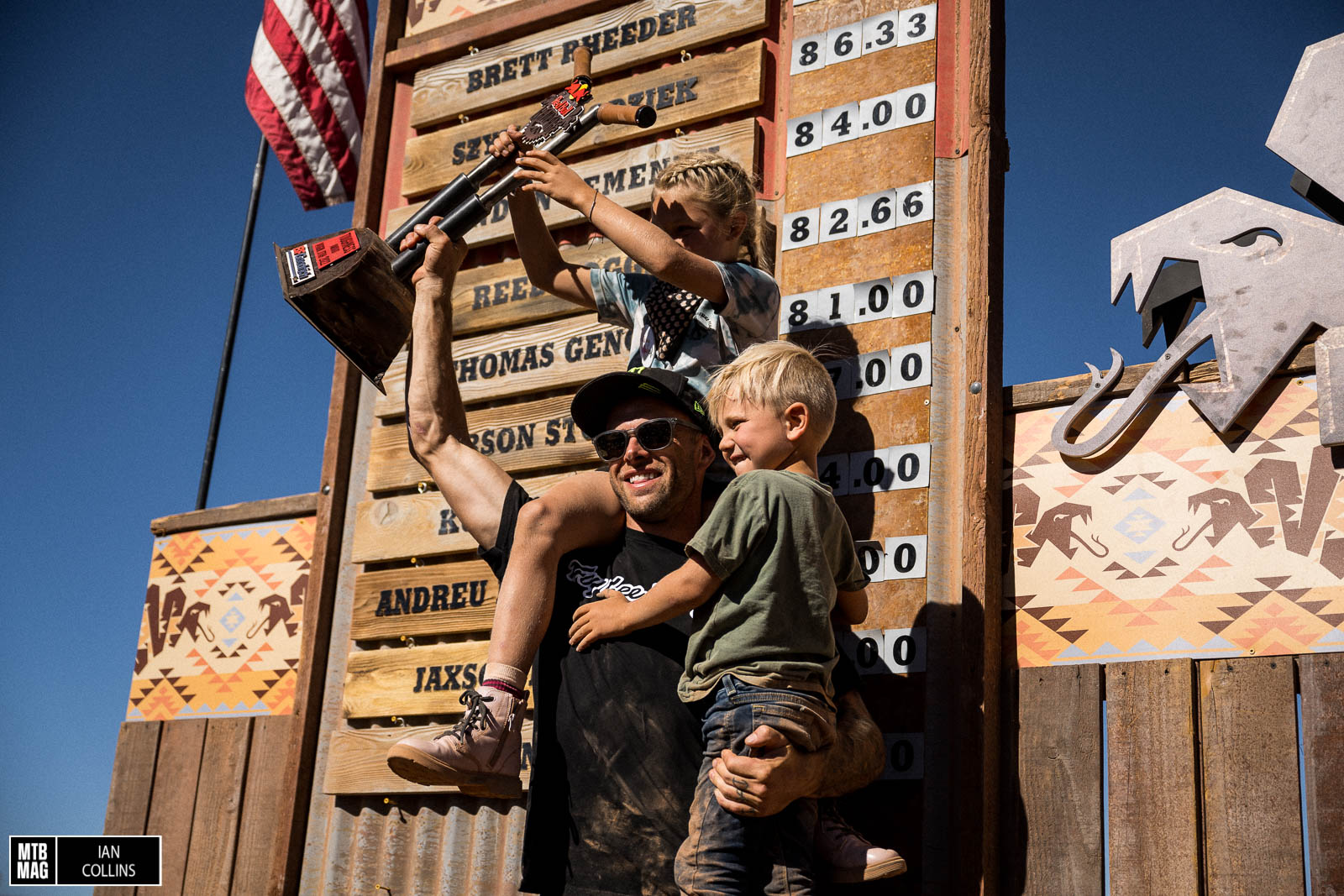 Cam Zink walked away with the toughness award after playing it smart, doing right by his family and walking away from a tempting but risky move on a feature that didn’t quite line up right. 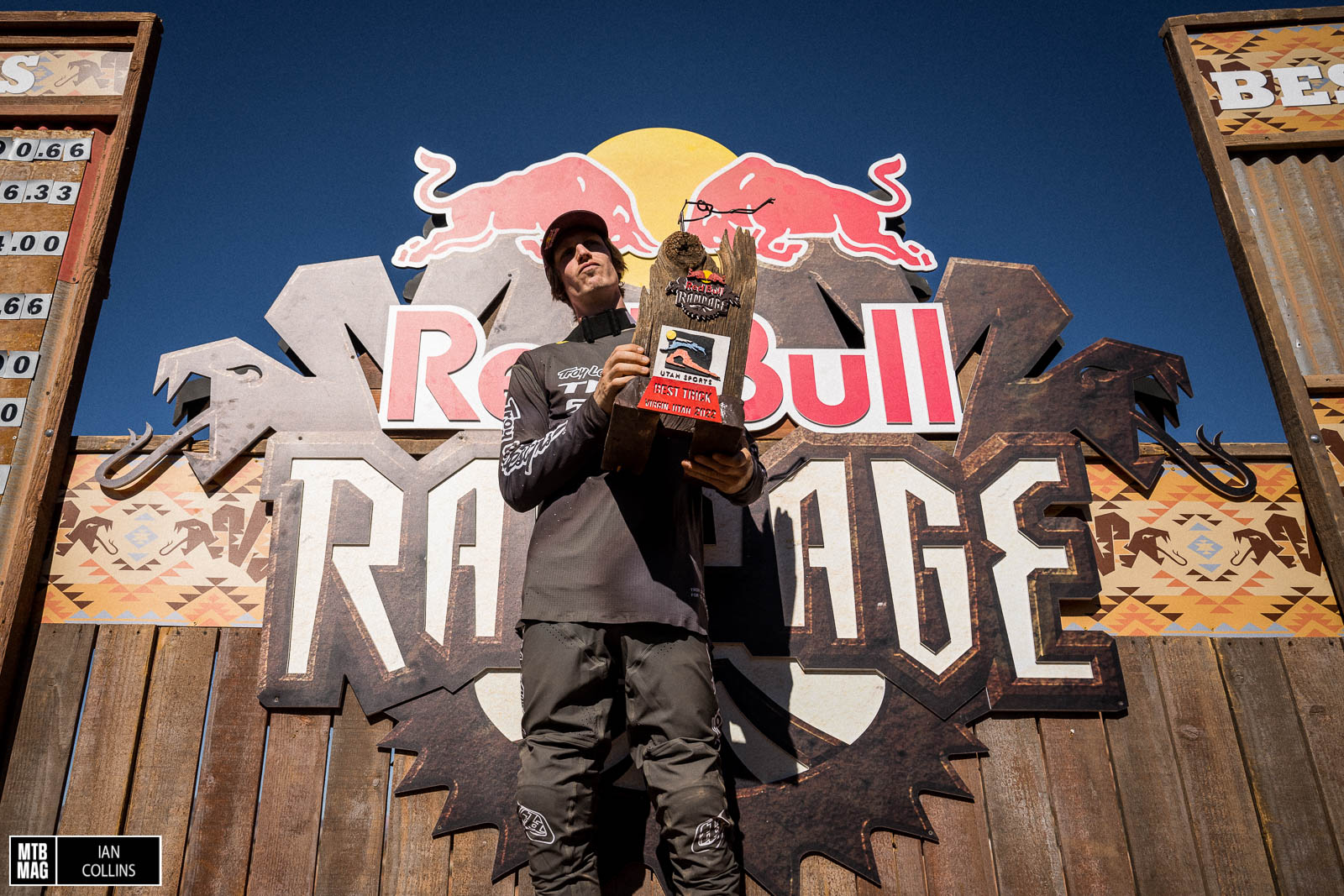 Semenuk landed the Best Trick award for his Caveman out of the gate, despite acknowledging that the barspin canyon gap transfer was much scarier. TV, camera angles and all that stuff – ya know…? 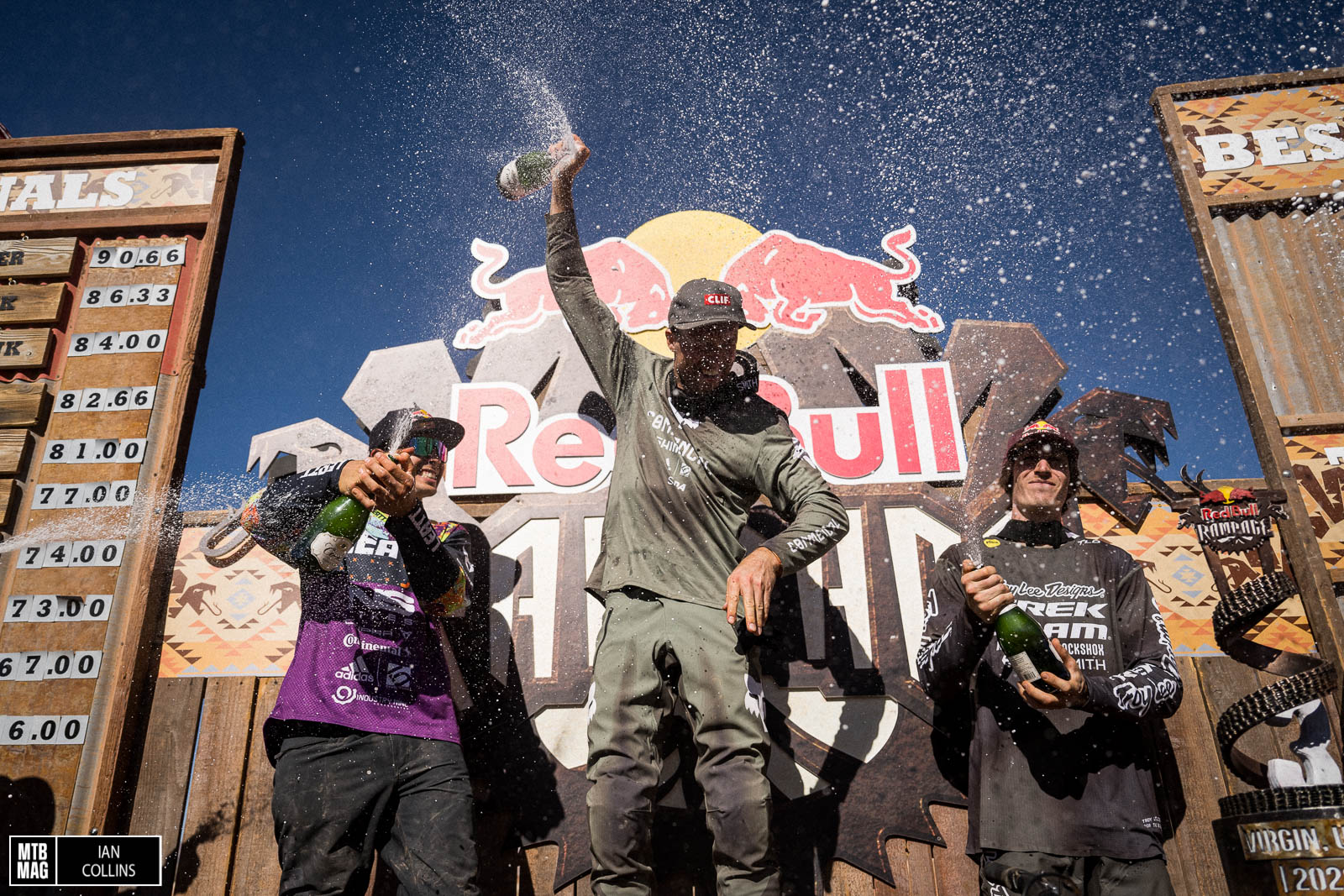 Top three on the podium soaking it in. My camera’s on/off button is sticky from the champagne that doused me about a half a second after this shot, so I hope you enjoyed this. 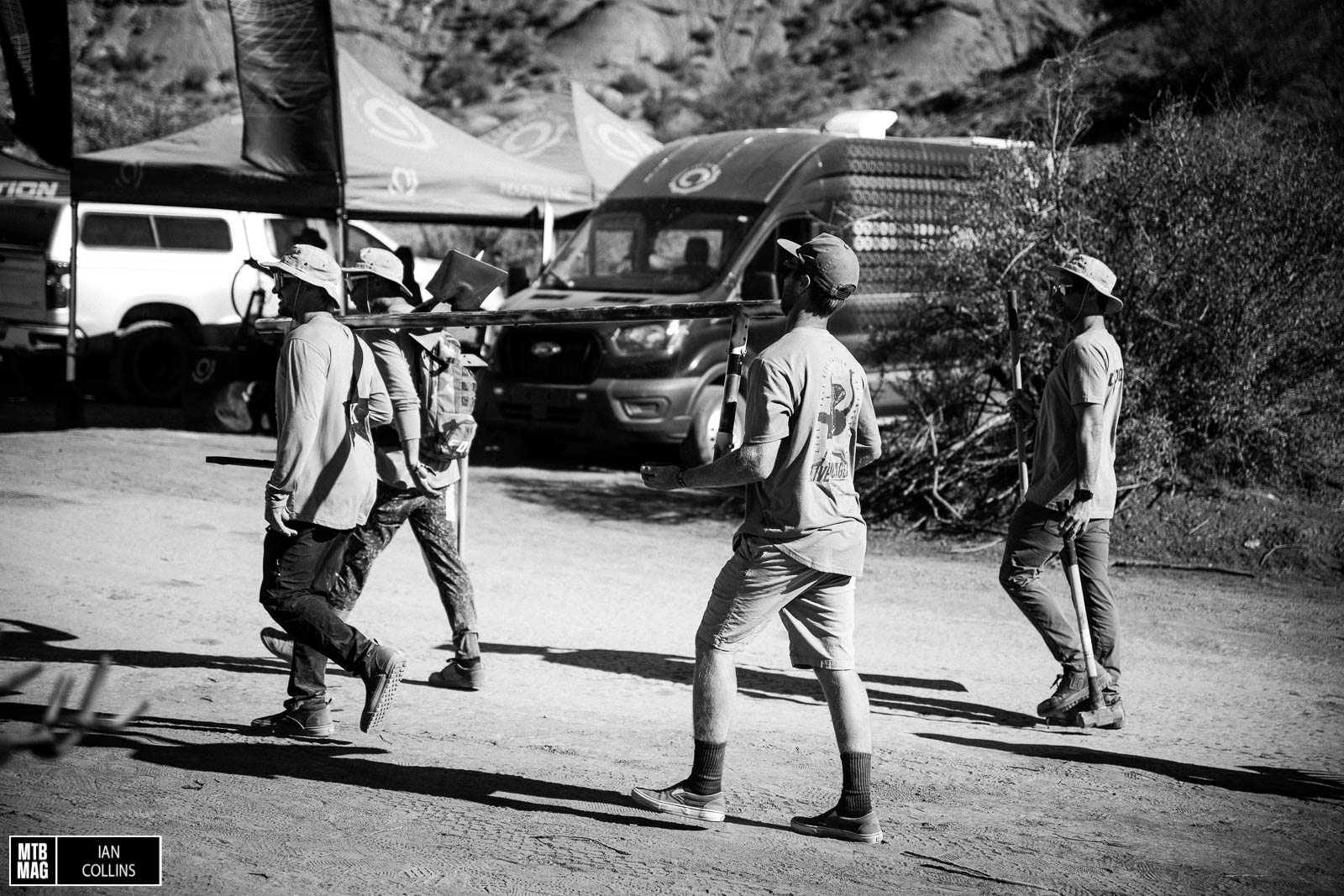 Last but not least, Dylan Stark and his insane crew went out to the site late at night and buried a handrail on his course then raised it up for him to crank grind in his final run. Here they are marching it proudly back out. Thanks to all the riders, diggers, organizers and staff on the ground. This was one for the books!