Fox just launched the new 34 Step Cast. As the name suggests, it’s the same concept as the 32 SC, which we tested some time ago: the lower part of the stanchions is hollowed out, and the general design is oriented toward light weight. 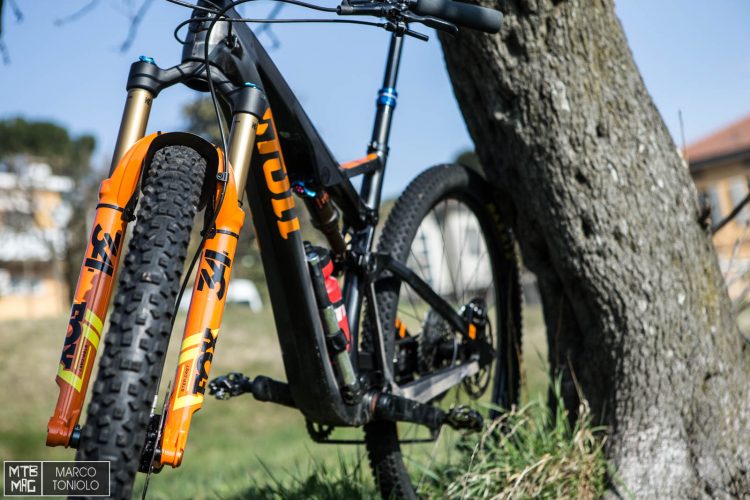 Unlike the 32 SC, the famous “step” is on the outer side of the stanchions instead of the inner side. The step is also smaller, due to the longer stanchions and the space taken up by the hydraulics. The result is a very light fork: with 1,620 grams it can be used in marathon style competitions. 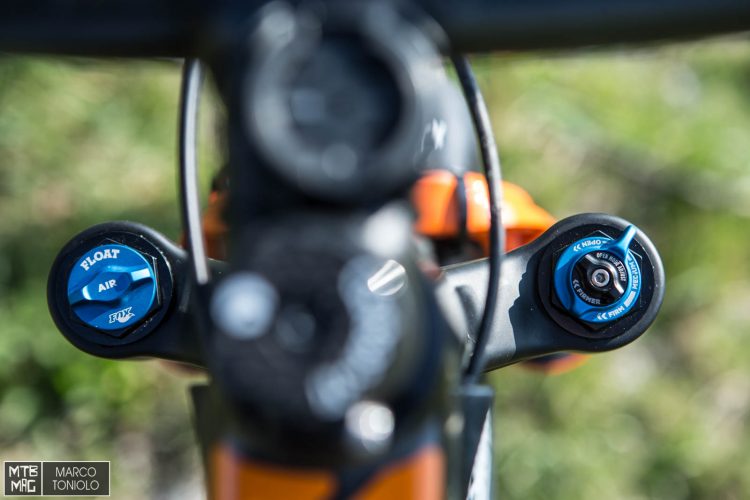 The cartridge and compression tuning are achieved in classic Fox style: Fit4 with blue knob to set the fork at open, trail or locked position. The black knob adjusts the compression when the fork is in its open position. The tuning has been set by Fox specifically for the new 34 SC. 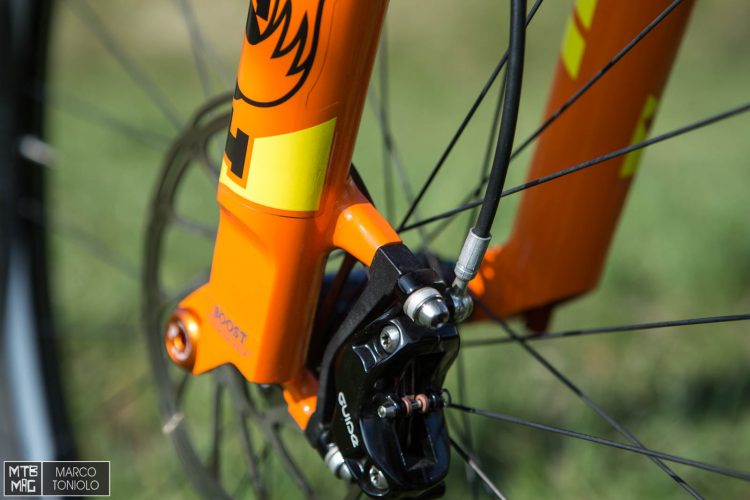 The 34 SC is designed for 160mm discs, consequently, to mount discs with 180mm of diameter or more, a specific adaptor is needed.

Below are the charts with the standard number of spacers into the positive chamber. The tested fork comes with two spacers, which I used the whole time. As you can see, the classic 34 is still in the range. 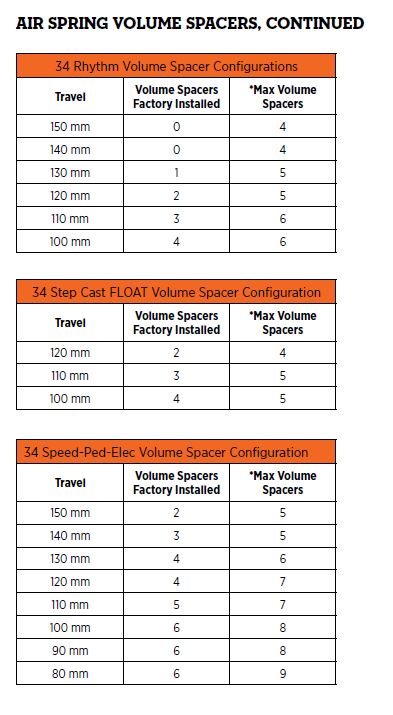 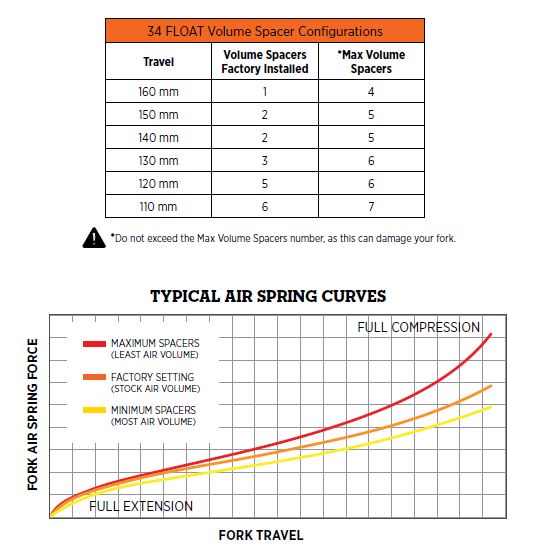 I had the chance to test the new 34 SC for approximately two months. I installed it on the Stoll T1 for the duration of my testing. Actually the Stoll has been transformed into an M1 (M for Marathon), with orange decals, thanks to Thomas Stoll himself, who brought me the parts to turn his bike into a marathon rocket: he changed the shock link to reduce the travel from 135 to 120mm, and in the meantime replaced the stiff Monarch with a smoother Fox Float DPS. 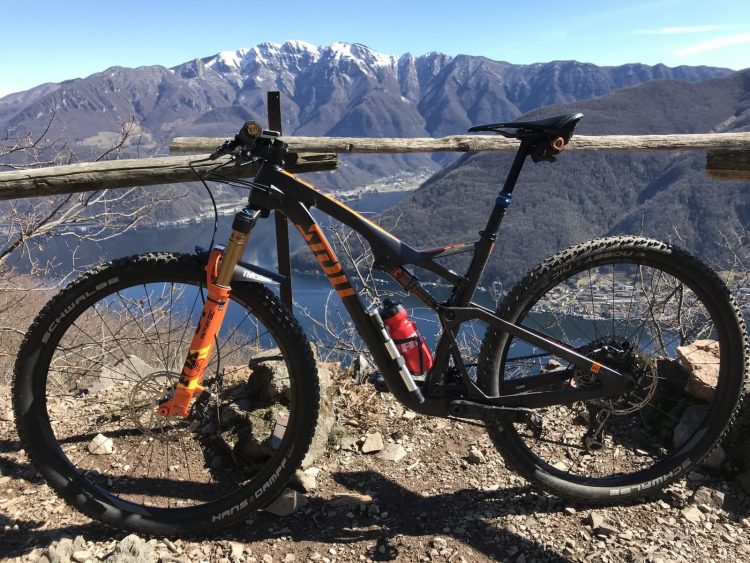 I’ve been left with 120mm of front travel instead of 140, and a bit worried about the downhill performance. For the record, previously I was riding with a RockShox Pike Solo Air. Thanks to good habits from Fox, who sends us their products to be tested for several weeks on our home trails before the launch of a product, rather than invite us to ride unknown trails for a couple of days, I could compare the forks, analysing in particular the difference in feel. During the first ride, about 1200 vertical meters uphill and downhill, I went through the same sections with no problems. We can spend years discussing the actual difference which 2 centimetres of travel can make, but the point is that my first impression of the 34 SC was great, and it has continued to convey confidence for three reasons:

The result is a very stable front end, which provides a lot of traction and grip also on harsh ground. You can let the bike flow and forget about the “short” 120mm travel, because the 34 SC uses it really well, working efficiently in the upper part, even on steep terrain. If I had to ride a technical marathon such as the Garda Ronda Extrema, again, it would be my first choice, not only for speed on singletrack, but to help avoid fatigue on the downhill and maybe recover some energy instead. Climbing, the lock out is full, while the “trail” position is a good compromise when riding ups and downs on harsh ground. 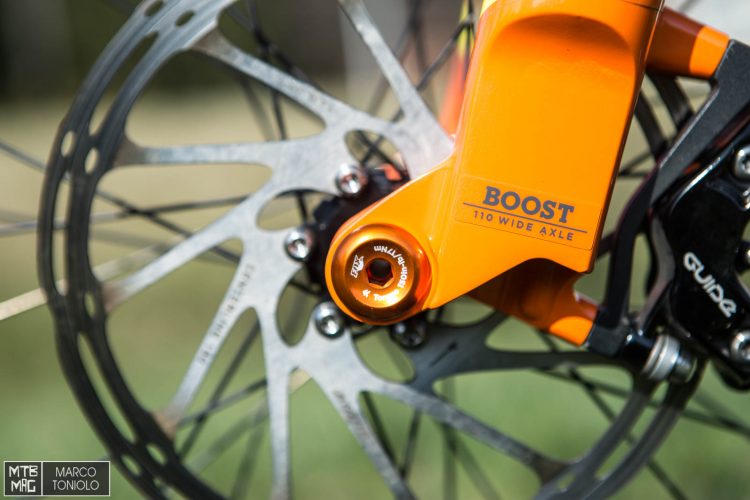 It is hard to find a weak point to this fork, after all, the Fit4 cartridge hydraulics received high praise in all of our reviews over the last two years, since it was first launched. Given the light weight, one could have their doubts about the stiffness of the 34. Fox states it is as stiff as the 140mm 34, but weighs in  ~200 grams less. On trail I admit I found no differences with the Pike and had no precision or braking issues. It didn’t surprise me, though, since I already knew the little sister, the 32 SC.

The 34 SC will rule the 100-120mm segment: its very light weight and its excellent performance make it perfect to ride a Marathon race with or simply for those who want a trailbike with short travel performance at an incredibly light weight.

[Video] Behind the Mask – Jordie’s Zone