In 2016 Shimano presented the new XT Di2 electronic drivetrain, the cheaper version of the XTR Di2 that we tested some time ago. In November 2016 we installed it on our Pivot Firebird which we use for long-term tests: now, after 4 months, here are the results. This article focuses on the test itself, and you can find all the technical specifications in the presentation of the XT Di2 here. 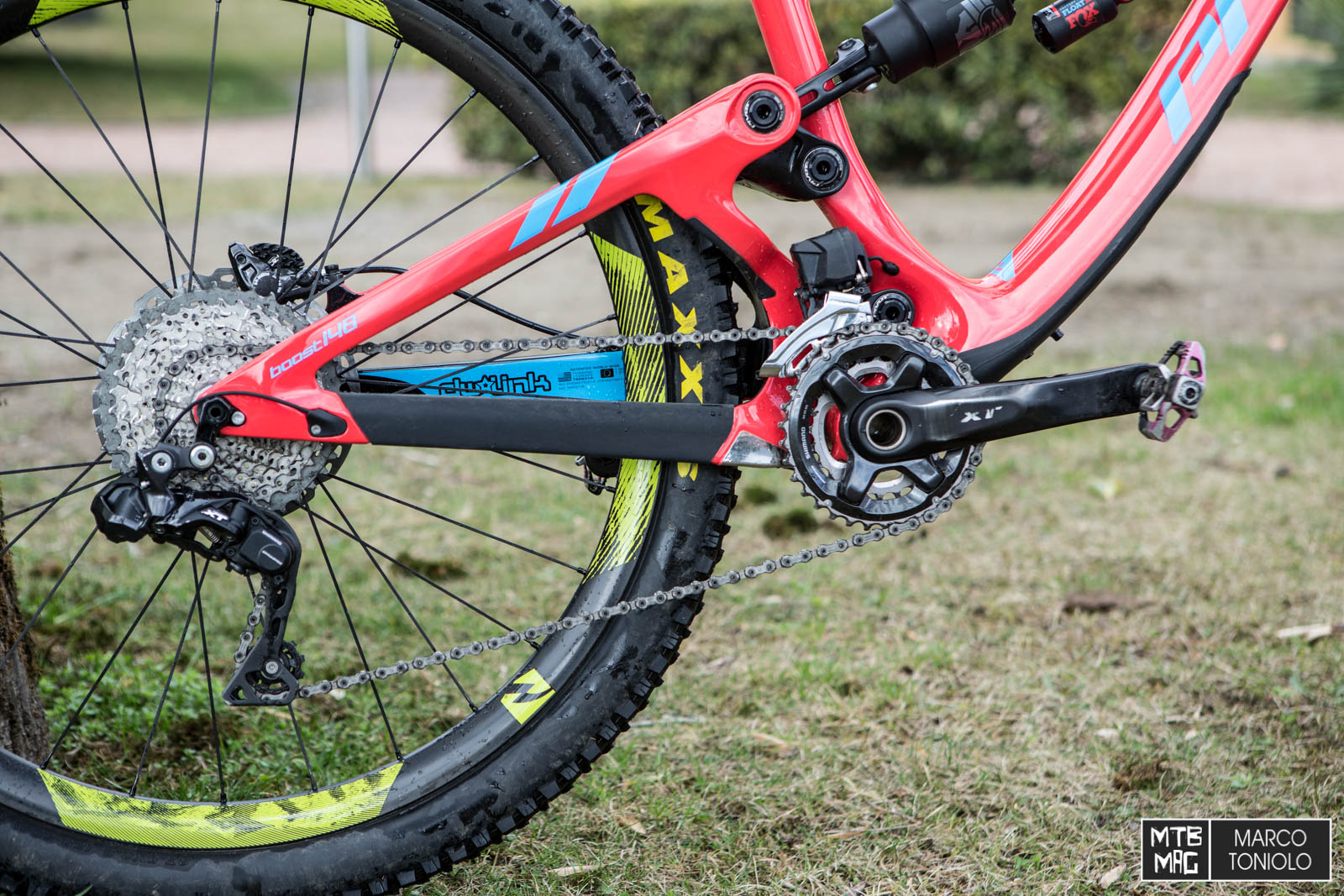 We chose to try the double chainring Syncro Shift managed by one shifter with two shifters. The Di2 software controls the front and rear derailleurs at the same time, according to your preferences, set using the E-Tube app available for smartphones and tablets. 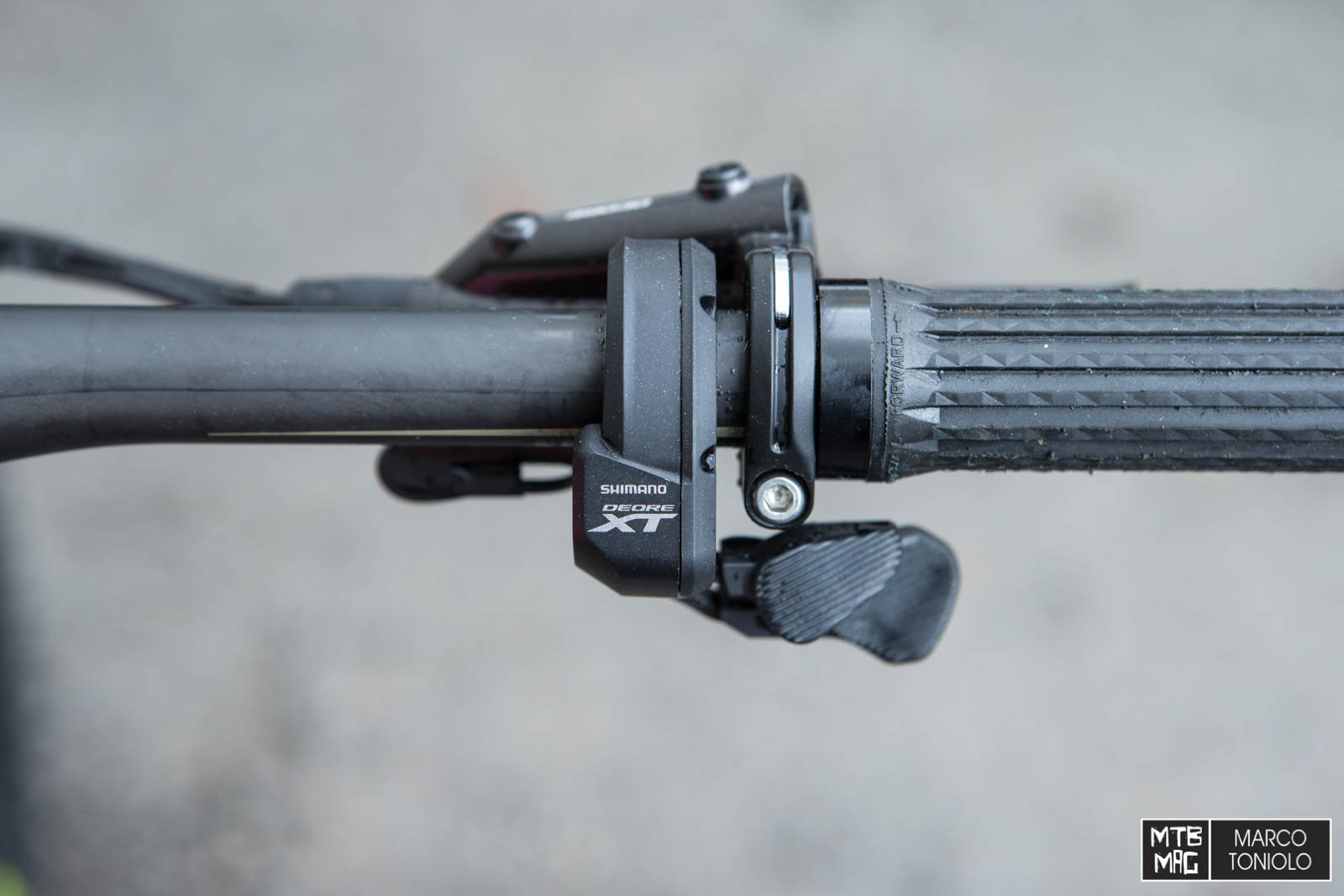 The front derailleur works according to the following scheme: 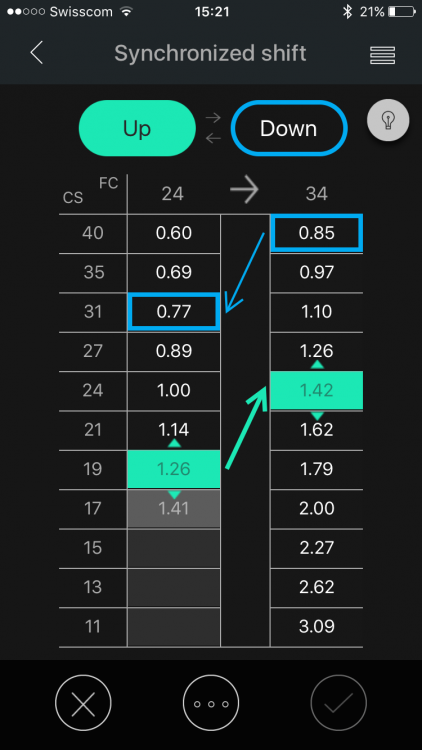 Explained: from the 34/40 gear, the next lower gear would be the 24/31. From there on, shifting to a higher gear, the chain will remain on the 24 until it reaches the 19t sprocket. At that point the chain will go back onto the 34t chainring and the 24t sprocket.

It took us some time to choose this configuration: the critical point was to switch from one to the other chainring on technical climbs preceded by fast sections. Since we know our test tracks very well, we also know beforehand when to shift to the 24/19 to gain speed and then gear down to climb the steep ramp. Our main goal is to avoid having to shift the front chairing in the middle of a climb, because this forces you to take some load off the pedals and then it gets a lot harder to climb to the top of a steep pitch.

The Di2 enables to save two configurations but we ended up always using the same one. The second one is perfect for faster trails. We set the average speed for sequential switching, that activates with constant pressure on the shifter paddle: in this way you can go from the 24/40 directly to the 34/40. 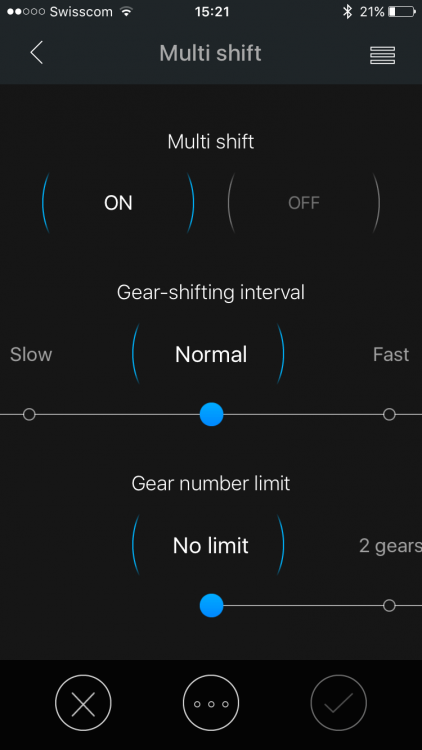 The battery resides in the down tube of the Firebird, stable and well protected. We didn’t charge it for four months and the indicator still shows two bars. Given the season, the bike has not been used as often as it would in the summer, but it was exposed to the cold in the garage. 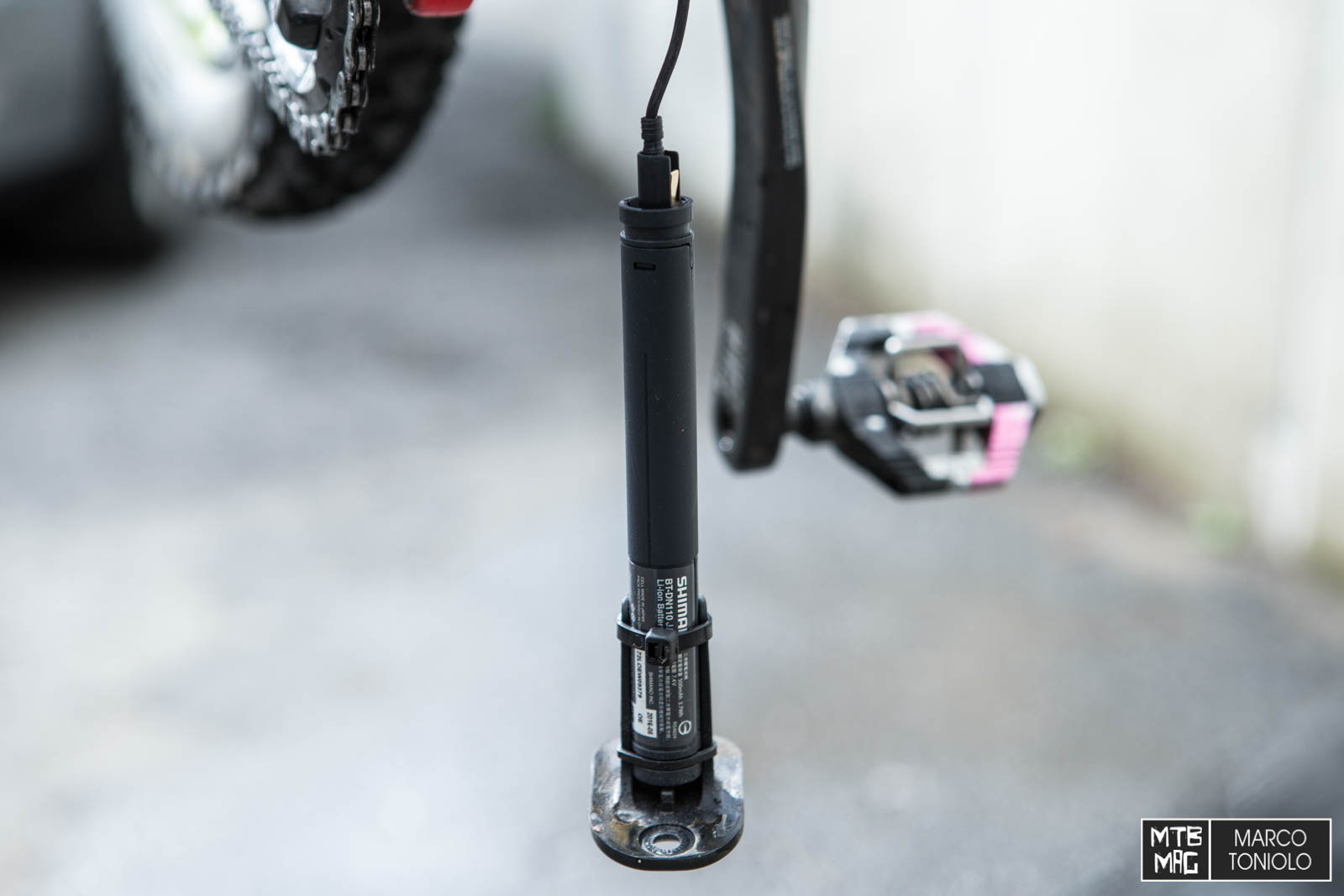 Any time you shift gear, the battery level is shown on the screen. The latter switches off after 5 seconds, but this feature can be customized. On the right side of the display there’s the battery charger port. 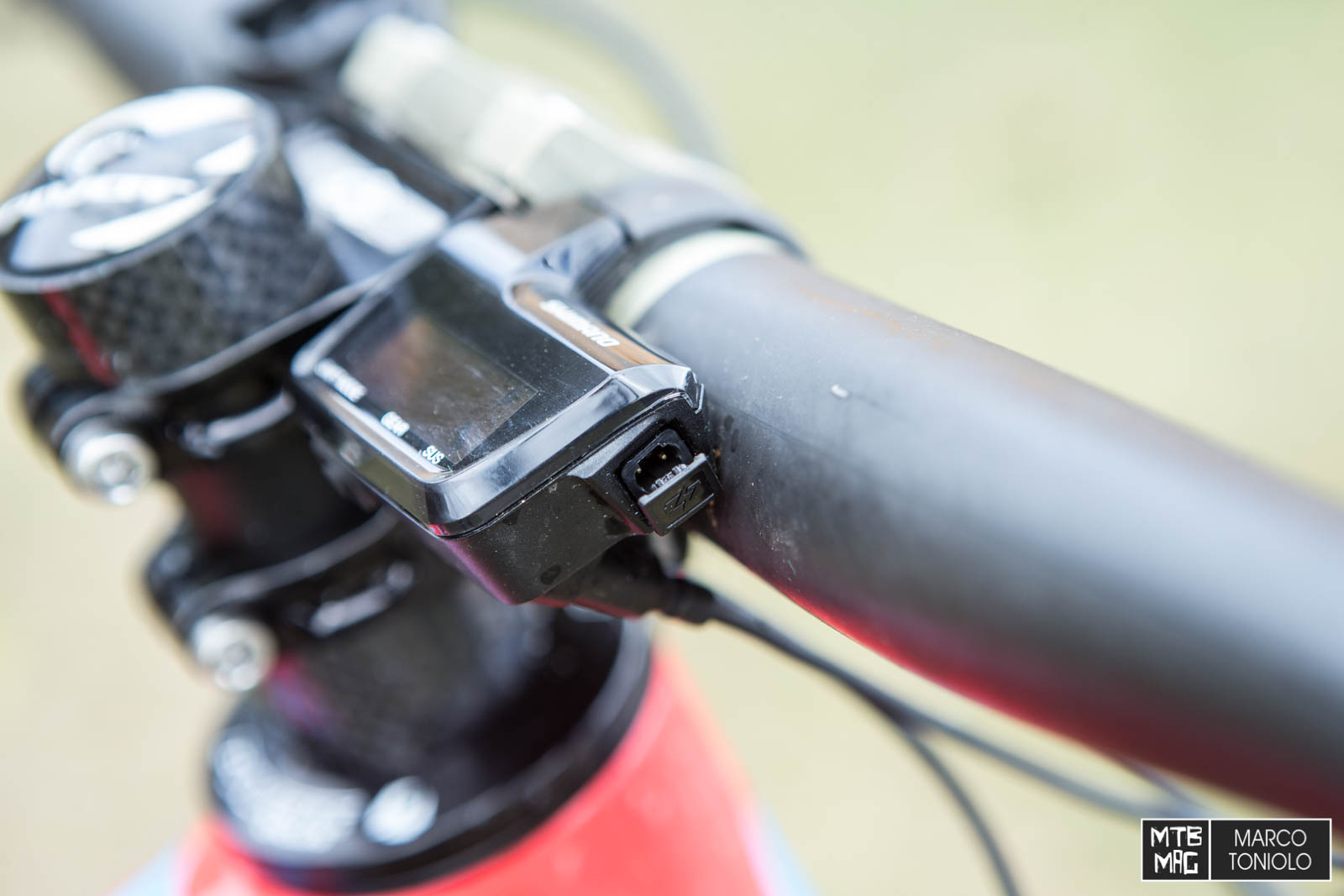 Installation has been carried out by Shimano Italy. Either way, it is easier to install than a mechanical drivetrain since there are no adjustments required: the electric signals travels via wire to which the system is connected, so there’s no need to tighten it and it doesn’t get loose with time. 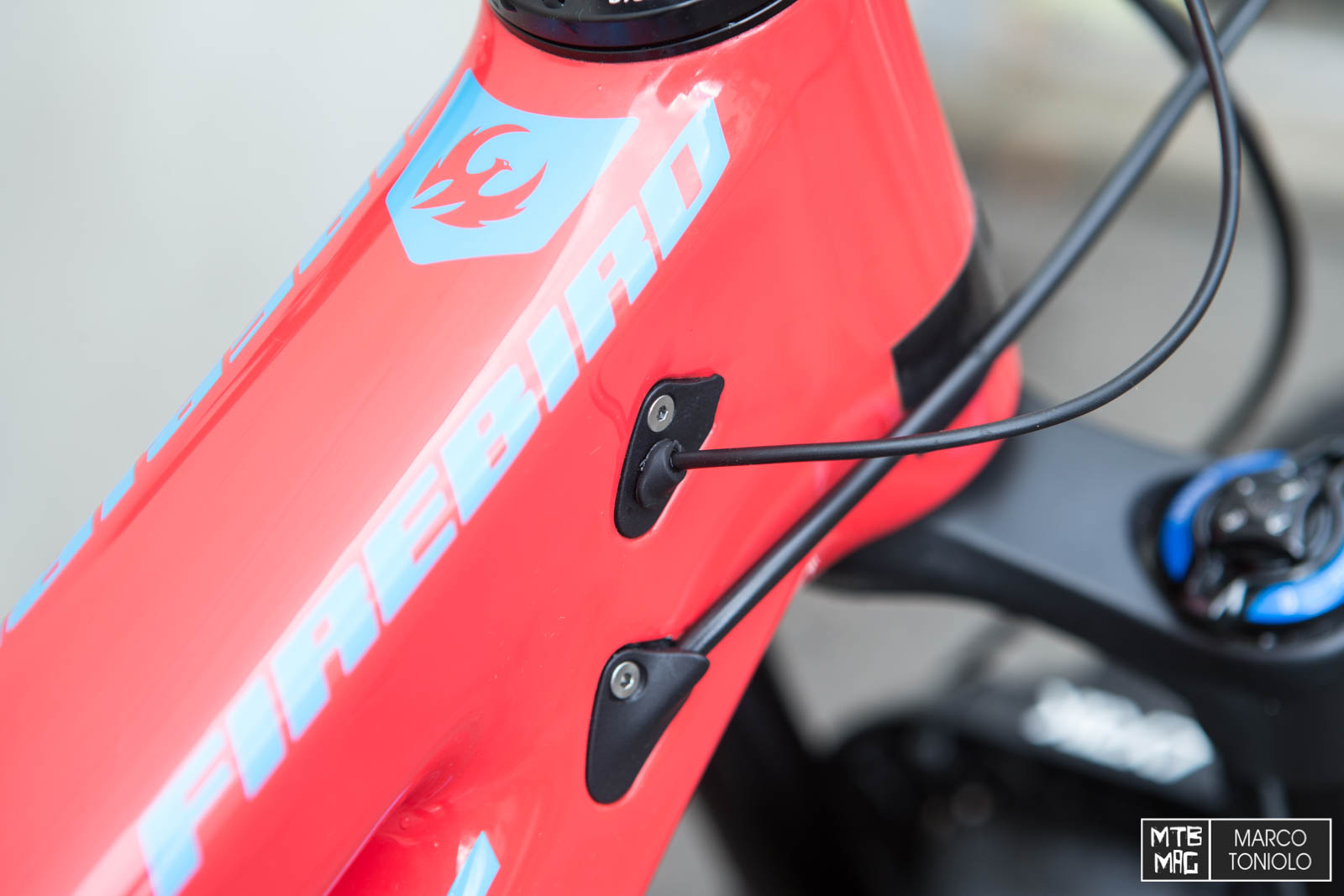 Let’s start with a list of the highs and lows of this electronic drivetrain, then we’ll get into details: The XT Di2 shifting is exceptionally good, you can’t describe it any differently. Thanks to the electronic control, it is always perfectly adjusted and it works efficiently under any condition, in the mud as well as when it’s dry. There are no cables to tighten nor housings which wear down with time or get dirty, requiring more strength in the fingers to shift gears. On Di2, just a slight pressure moves the chain to the desired position very quickly. Already in these first lines there are enough reasons to buy one. If all was that perfect, though, we wouldn’t have listed four “lows”, starting from the fact that in our configuration there is a front derailleur. There are thousands of posts in our forums about the “single/double chainring” debate, and one point the fans of the double always claim is the Synchro Shift, that is the possibility to control the whole system with only one shifter. On paper this is a genius idea, on trail, though, the front derailleur remains a disadvantage: in order to switch from one chainring to the other one you need to take some pressure off the pedals until the chain has come into the right position.

If you forget to do so, the chain slides and drops. This happened to us during the first rides, also because we’ve always used almost exclusively a single chainring on our mountain bike in the last few years (not road bike, but that’s another story). It is not exclusively a problem of Di2, in fact the system does warn you with a sound that the next gear shift (in one direction) requires to switch to the other chainring, but in some situations this can cause some issues. For example: climbing a technical section preceded by a fast section. If you need to switch chainrings in the middle of at steep pitch, then you’re in trouble. There is simply no reasoning here: the single chainring system is better, because you can always keep on pedaling without worrying about the front derailleur when you are facing an already challenging situation.

After some time we’ve found a good setting for the trails that we ride frequently, as already said in the configuration paragraph. The problem is when you ride unknown trails. 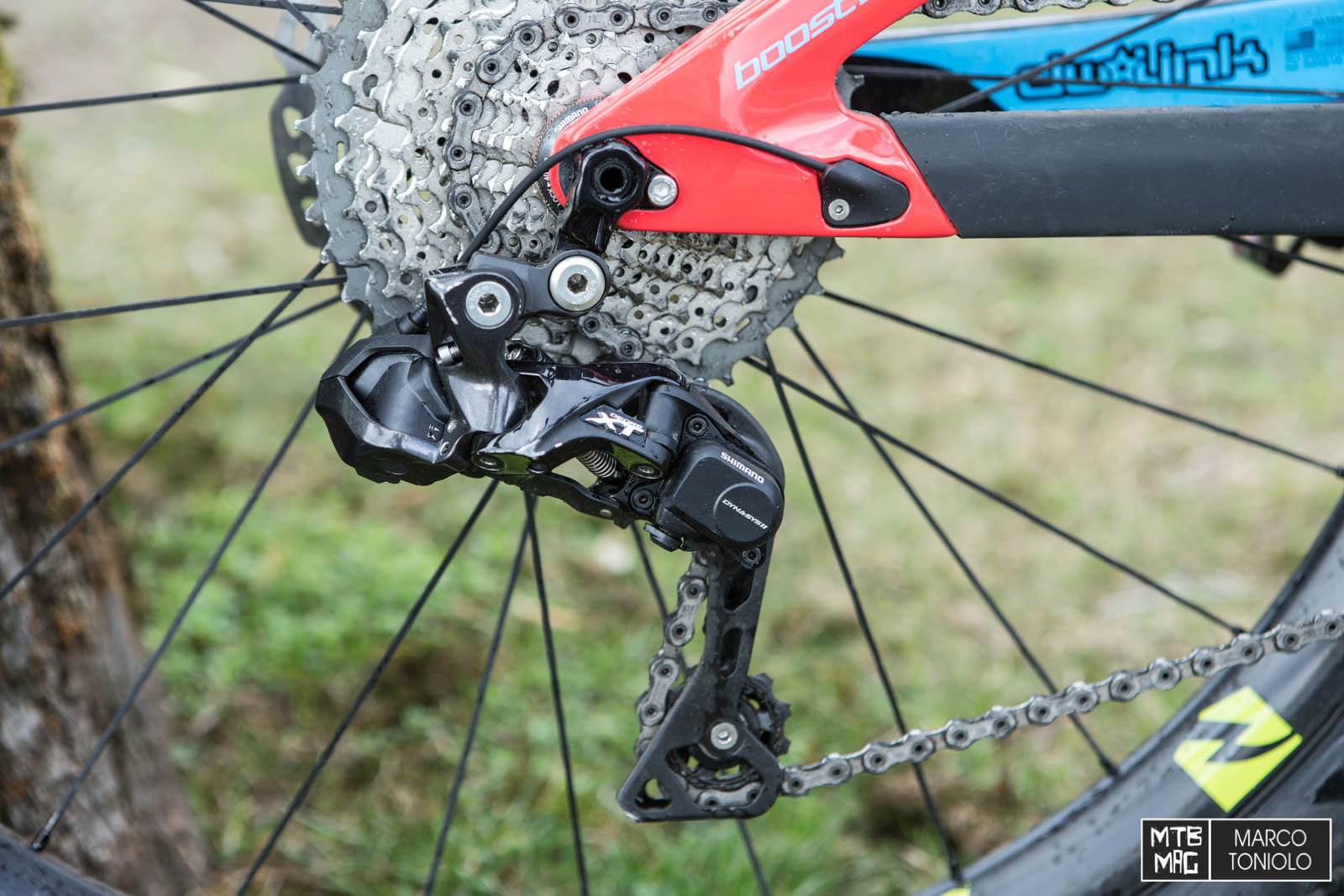 The chain is very tight, therefore the transmission is completely silent and even on harsh downhill sections the chain never dropped. The Di2 eliminates the usual Shimano clutch issue, which is the high amount of finger strength needed to shift gears. On the other hand, the levers could be a bit bigger: especially when riding wearing winter gloves but also during hard compression sections on bumpy ground, it would be a lot more difficult to make a mistake in shifting. It is worth noting that shifting is done only by pushing the levers.

The XT Di2 single parts are solid: the rear derailleur hit a couple of times against some rocks but apart from some scratches it still works perfectly. The aluminum crankset is not the most appealing on the market, and it doesn’t cope well with shoe friction, but this has always been an issue for Shimano. 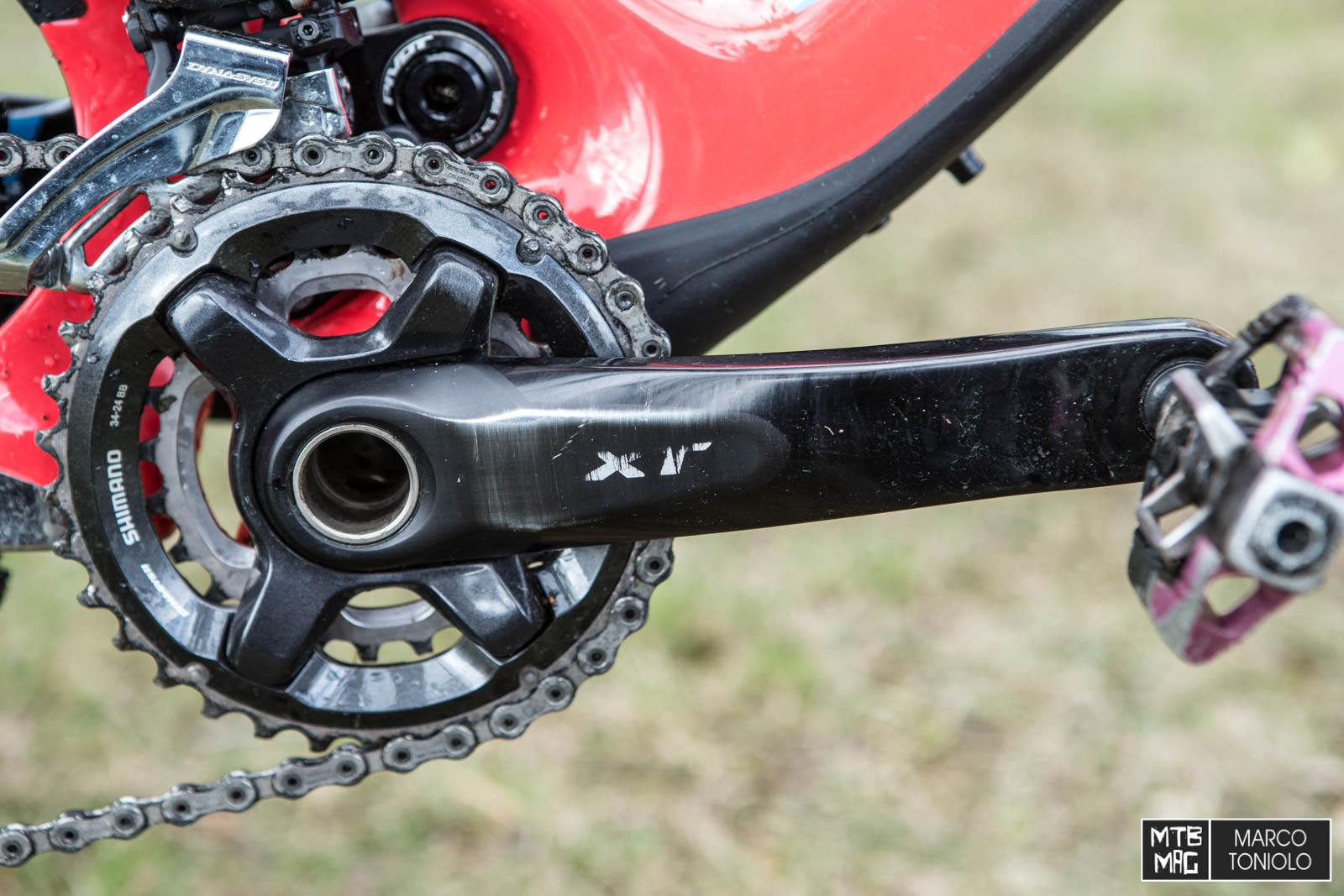 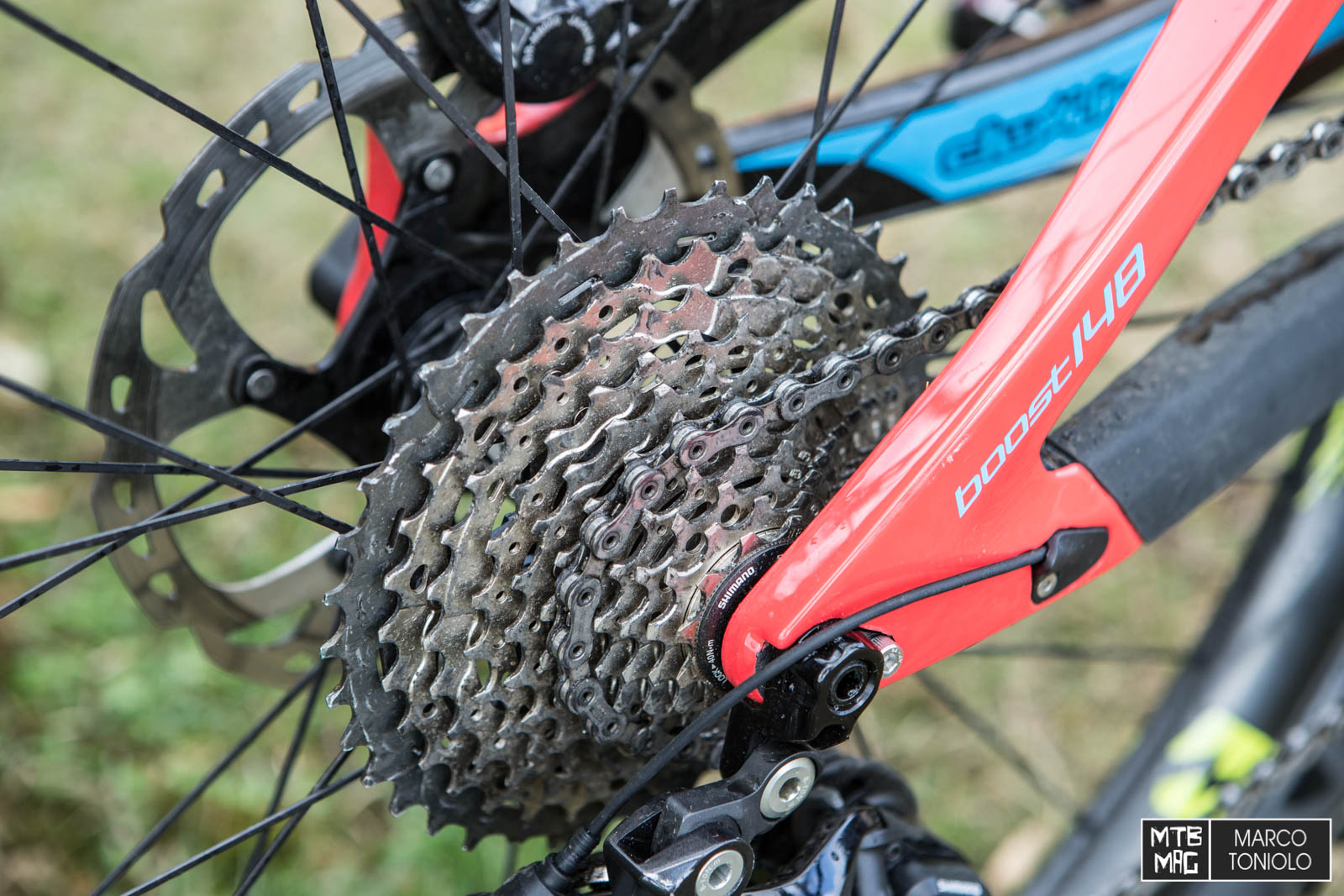 The elephant in the room

Let’s go straight to the point: which one is the best, the XT Di2 2×11 or the SRAM Eagle 1×12? Until June 2016 the Synchro Shift 2×11 had an obvious and big advantage: a wider gear range than the SRAM XX1 single chainring. Since the American competitor launched the Eagle (here is our test), the tables have turned. The price is approximately the same, the gear range is identical, the only difference is made by the front derailleur. The front derailleur plays an important role in terms of practicality and intuitiveness in strenuous situations like in the example of the technical climb. The Di2 can be used also as a 1×11 drivetrain, with 11-40, 42 or 46 cassette. 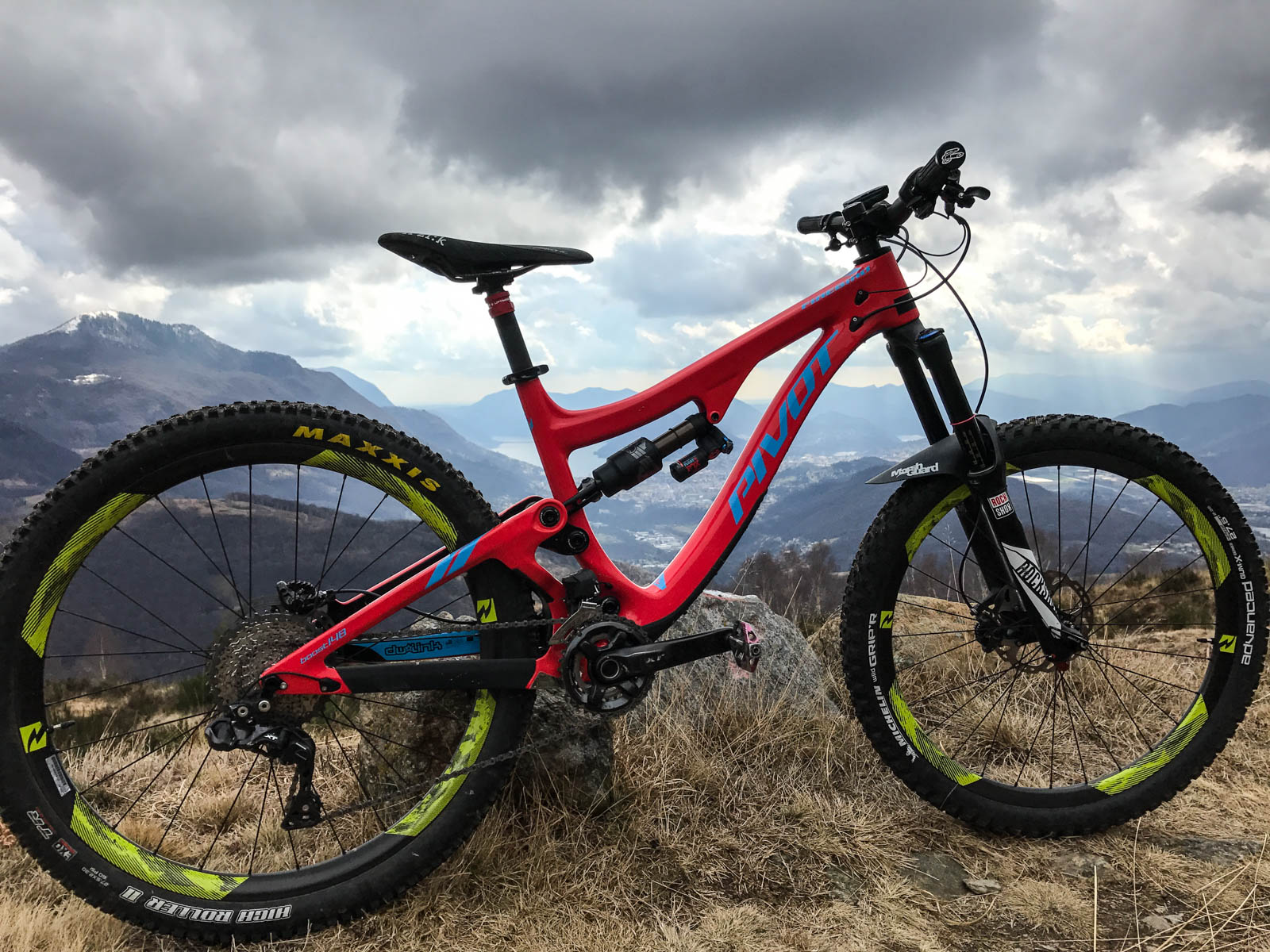 To some degree, Shimano went for a 2×11 because they don’t make any cassette with a 10t sprocket. The difference between the 10t and the 11t is quite big, and this is why we’d choose Eagle instead of a Shimano single ring drivetrain, notwithstanding the undeniable advantage of the electronic switching. In fact, in our opinion, the best solution would be an electronic shifting single chainring system combined with an Eagle cassette. Obviously we already tried to assemble this Frankenstein-like device, using the XX1 cassette not to overload the XT rear derailleur with the 50t sprocket. In any case the real problem would be the Di2 software mapping which doesn’t support the 10-42 SRAM cassette spacing in the 2×11 setup. We still want to try the XT Di2 in the 1×11 configuration, with 11-46 cassette.

The Shimano XT Di2 drivetrain provides fast and precise shifting characteristics which don’t change with time or riding conditions (mud or dry). Since there is no steel cable or housings which can wear down, the small amount of pressure needed to activate the lever will not increase as time passes. Despite the Synchro Shift and the possibility to set the gear configuration, the front derailleur still requires the involvement of the rider switching to the other chainring. For this reason the 2×11 transmission is more complicated to use in strenuous situations in comparison to a single chainring with the same gear range.