[Press Release] – Mondraker revolutionized DH from the get-go back in the summer of 2009, the very first model winning the Maribor World Cup while still a prototype ridden by Fabien Barel. Since then the rest has been history, and historic too. Summum introduced a series of technological advances never before seen on a Downhill bike, such as a frame which was ahead of its time in both looks, details and weight, multi-adjustable geometry and the unprecedented Zero suspension system which would go on to set the tone for a whole generation of Mondraker bikes which were to follow. 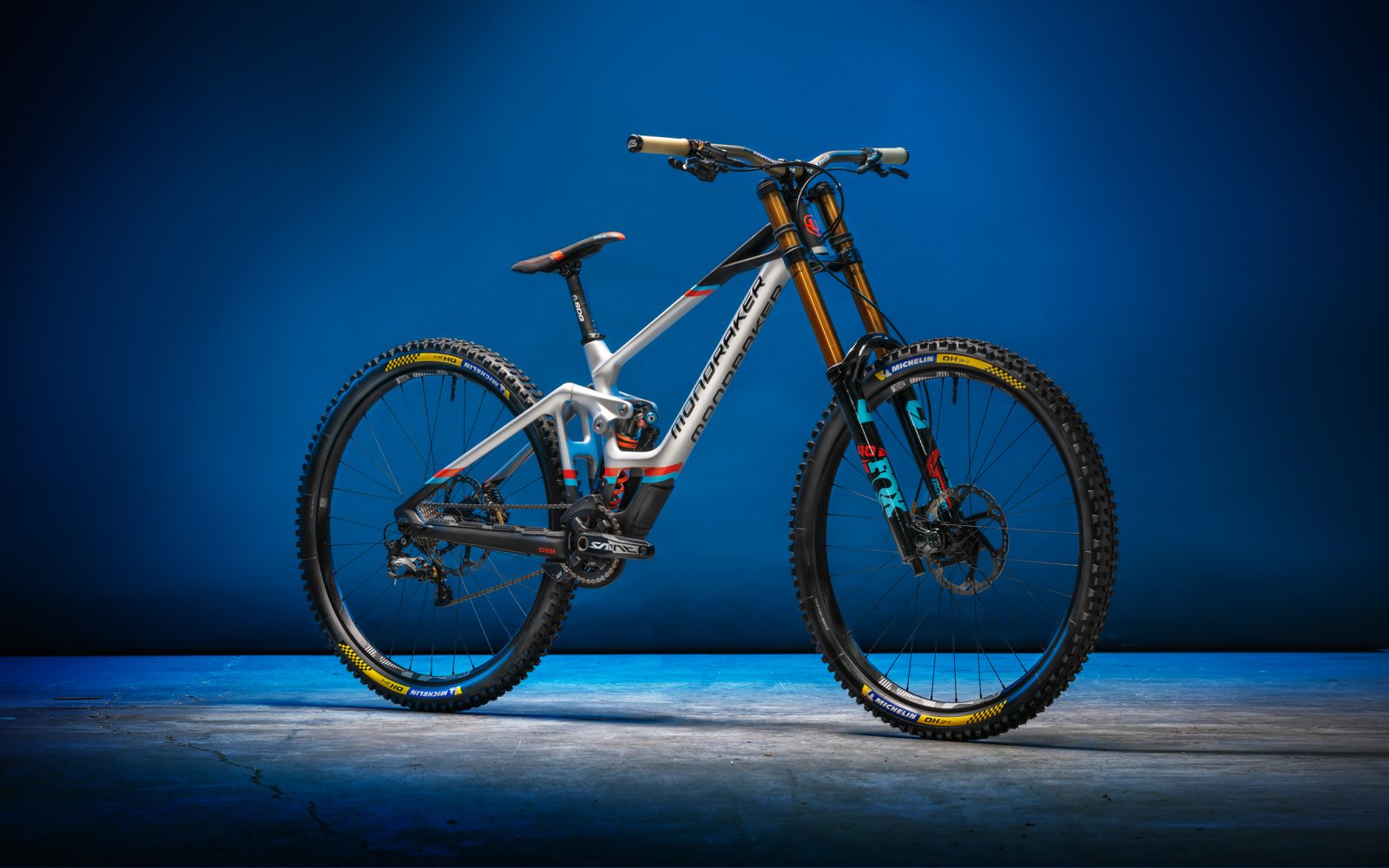 Years later the Summum Carbon arrived, and with it the record breaking milestone of taking home Gold, Silver and Bronze in the Val di Sole World Champs, something never before achieved in over 40 years of MTB World Champs competition. The achievements of the MSMondraker Team have been remarkable, and the 2022 Summum Carbon packs a bigger punch than ever before.

DH has traditionally been considered the F1 of Mountain Bike, and the World Cup races are the best possible test bed for the development of our products.
Nobody knows what a top-level DH bike needs better than our MS-Mondraker racers, and Laurie Greenland, Brook MacDonald and Eleonora Farina have helped us develop this new bike from the bottom up. Who better than them to make it to the top with a bike which has unprecedented performance when up against the clock? 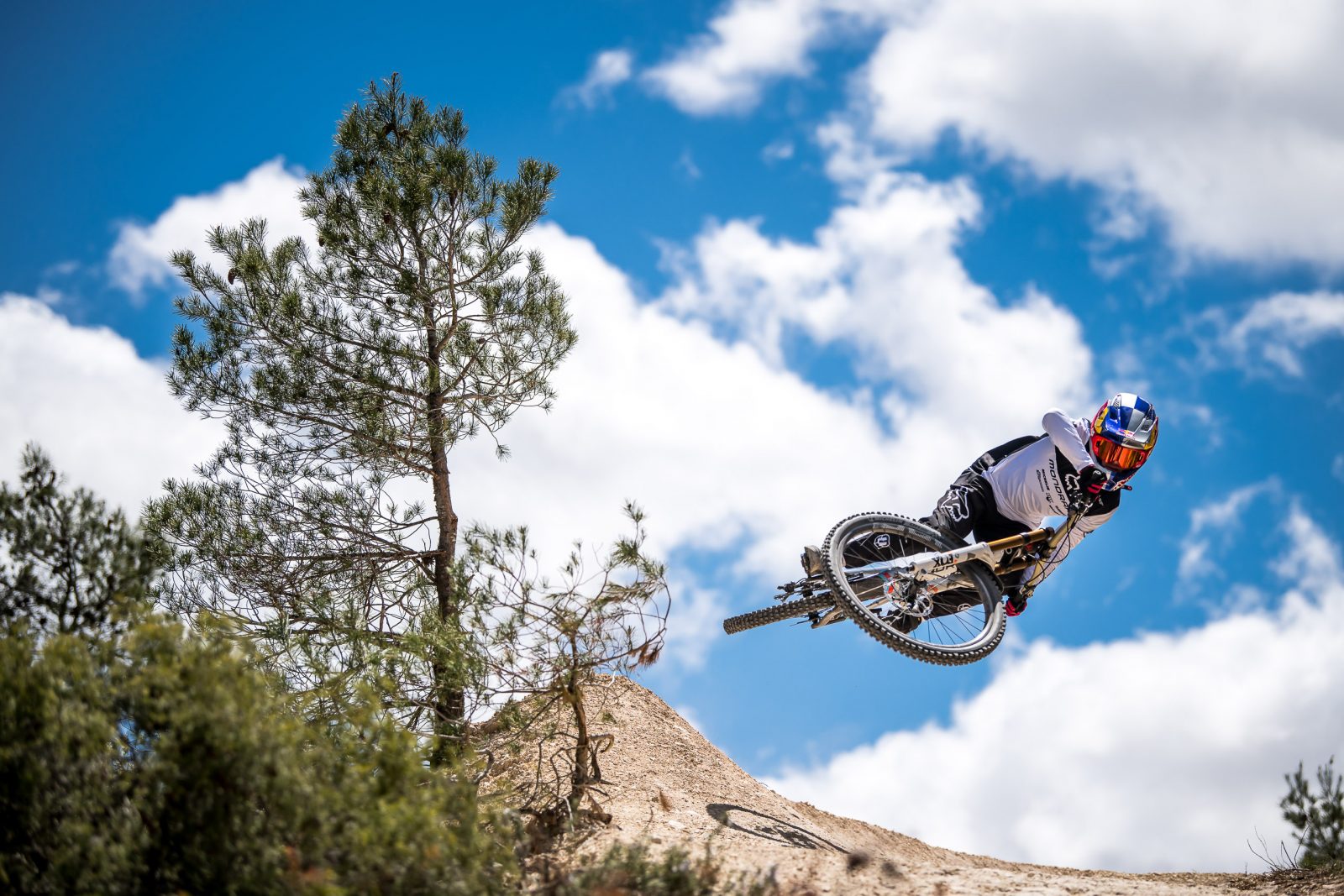 This season marks 10 years since the creation of the MS-Mondraker Team and there can be no better celebration than the premiere of this new Summum Carbon.

We have our roots in downhill, our DNA was forged from competition and the Summum is our icon. The new Summum Carbon 2022 is par excellence the representation of what a DH racing bike should be, being the most technologically advanced bike of its times: STEALTH AIR CARBON, FORWARD GEOMETRY, ZERO SUSPENSION SYSTEM and MIND come together to make the most efficient bike ever built to go up against the clock. 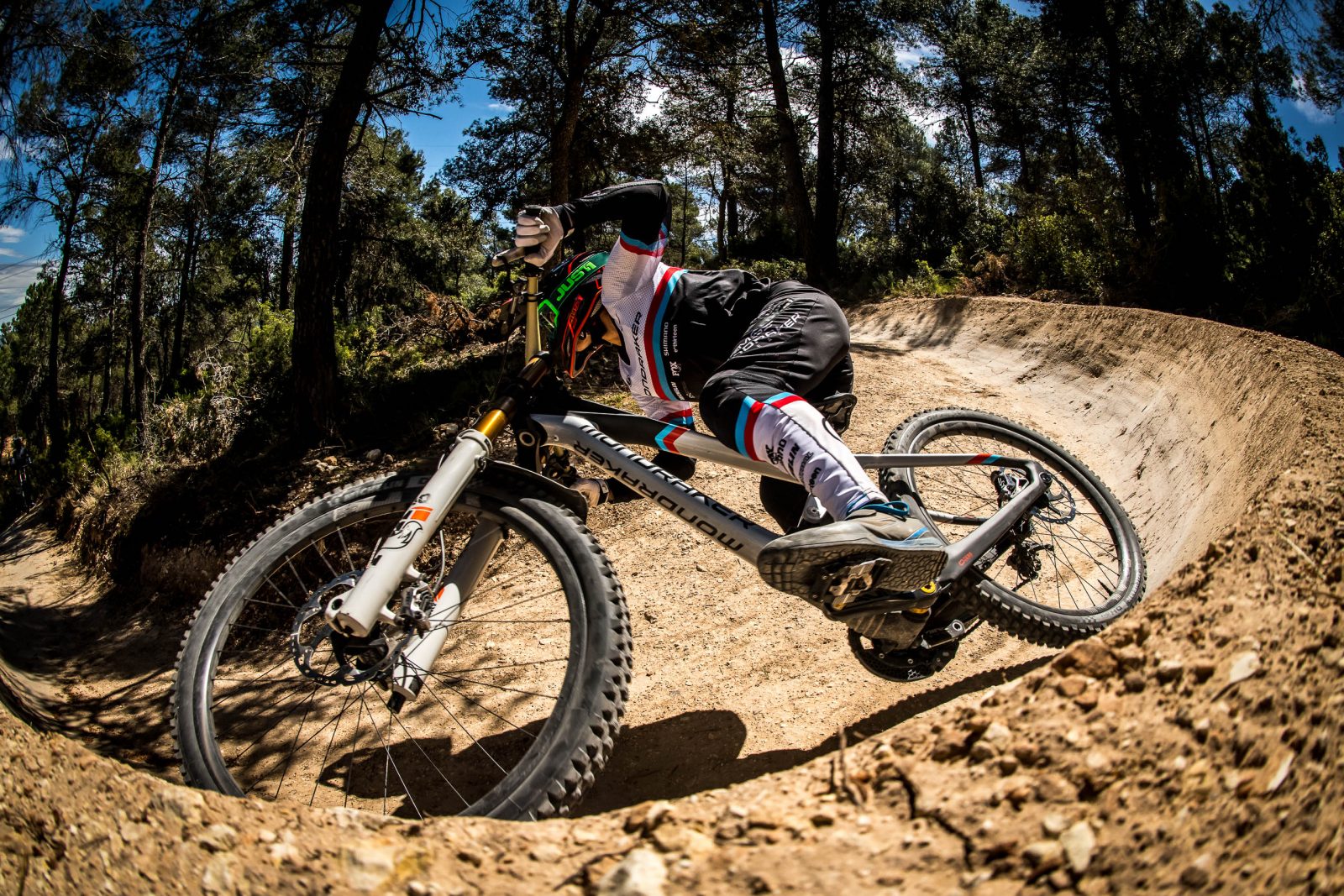 Summum Carbon is the representation of all of our knowledge and accumulated experience working on the most advanced carbon frame manufacturing technologies here at Mondraker. Stealth Air combines high modulus carbon fibers laid-up in just the right way to achieve an extremely low weight frame with optimal stiffness. Aesthetically the result is obvious: A distinctive frame that inspires speed, with sleek and aggressive styling. 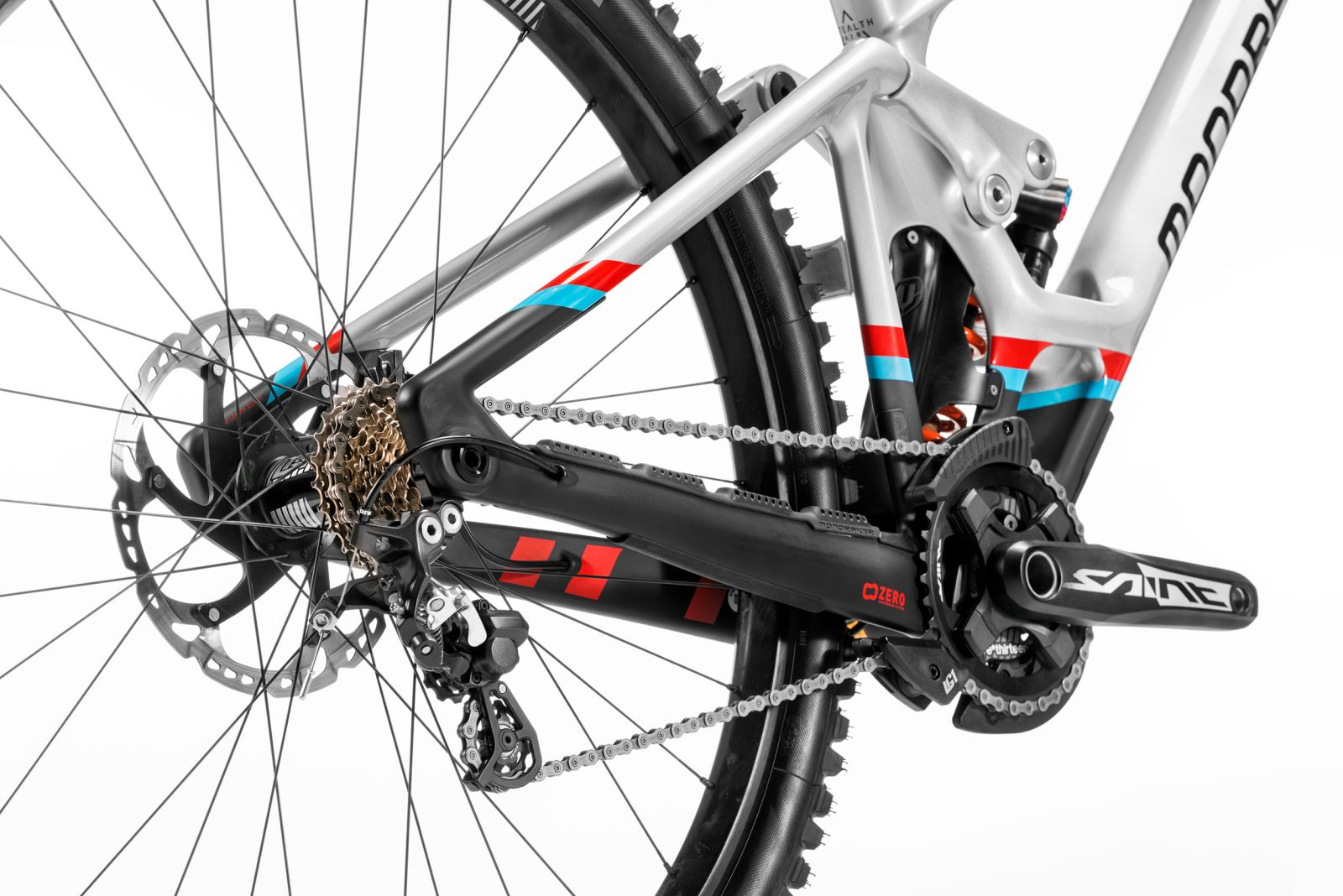 Summum Carbon comes with updated geometry evolved from previous models, and frame sizes have grown in line with our Forward Geometry philosophy by slightly increasing the reach to offer better performance in combination with 29” or MX wheels. 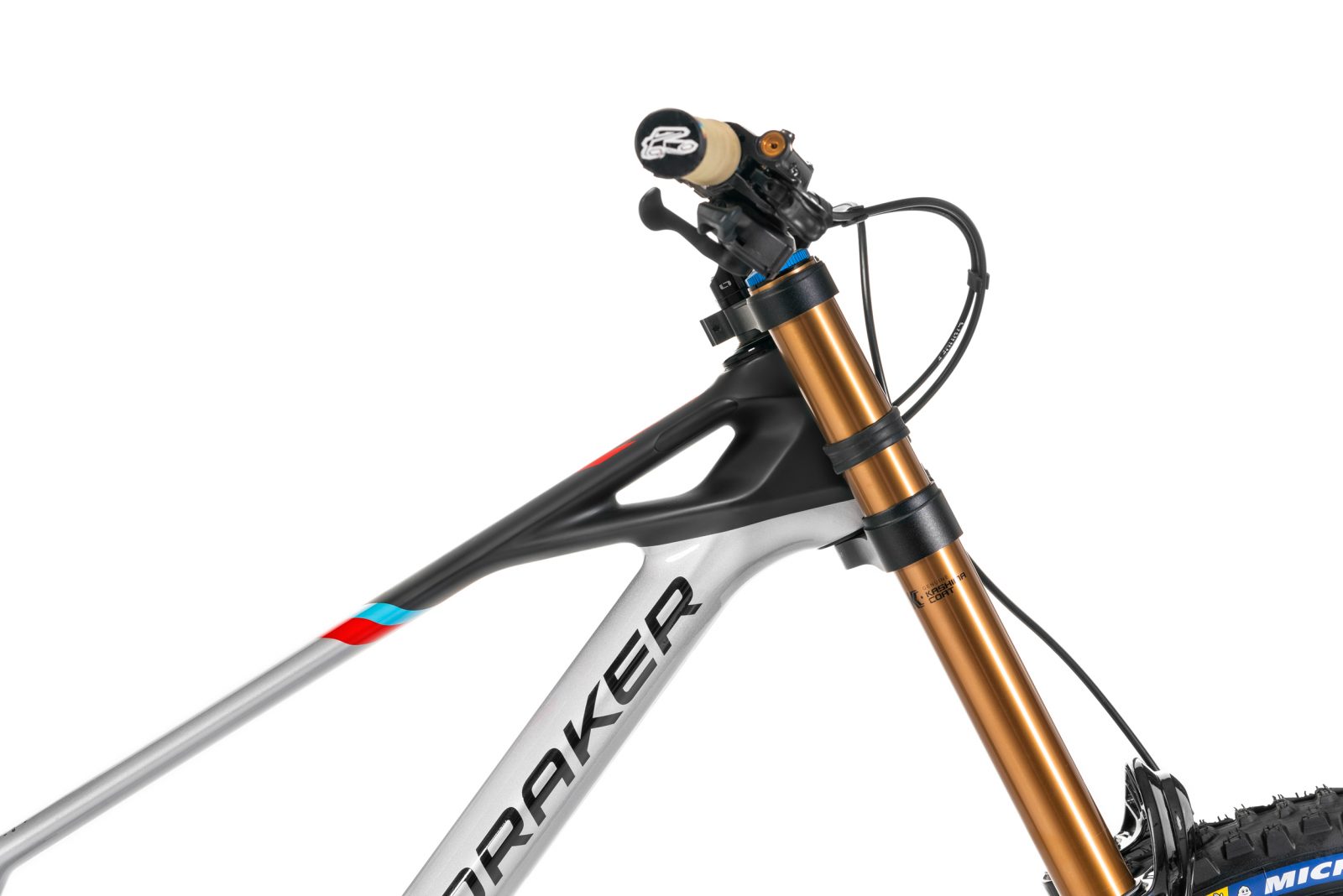 Our Zero suspension system is a unique, exclusive and patented suspension design which compresses the shock from both ends at the same time in a “floating” system with unparalleled absorption characteristics. Summum Carbon uses a steep leverage ratio in the first third of its travel to improve initial sensitivity, combined with a more progressive stroke at the end to better make use of its 200mm of rear travel. The new metric Trunnion damper helps smooth things out even more, offering better impact absorption and more structurally rigidity at the heart of Summum Carbon. 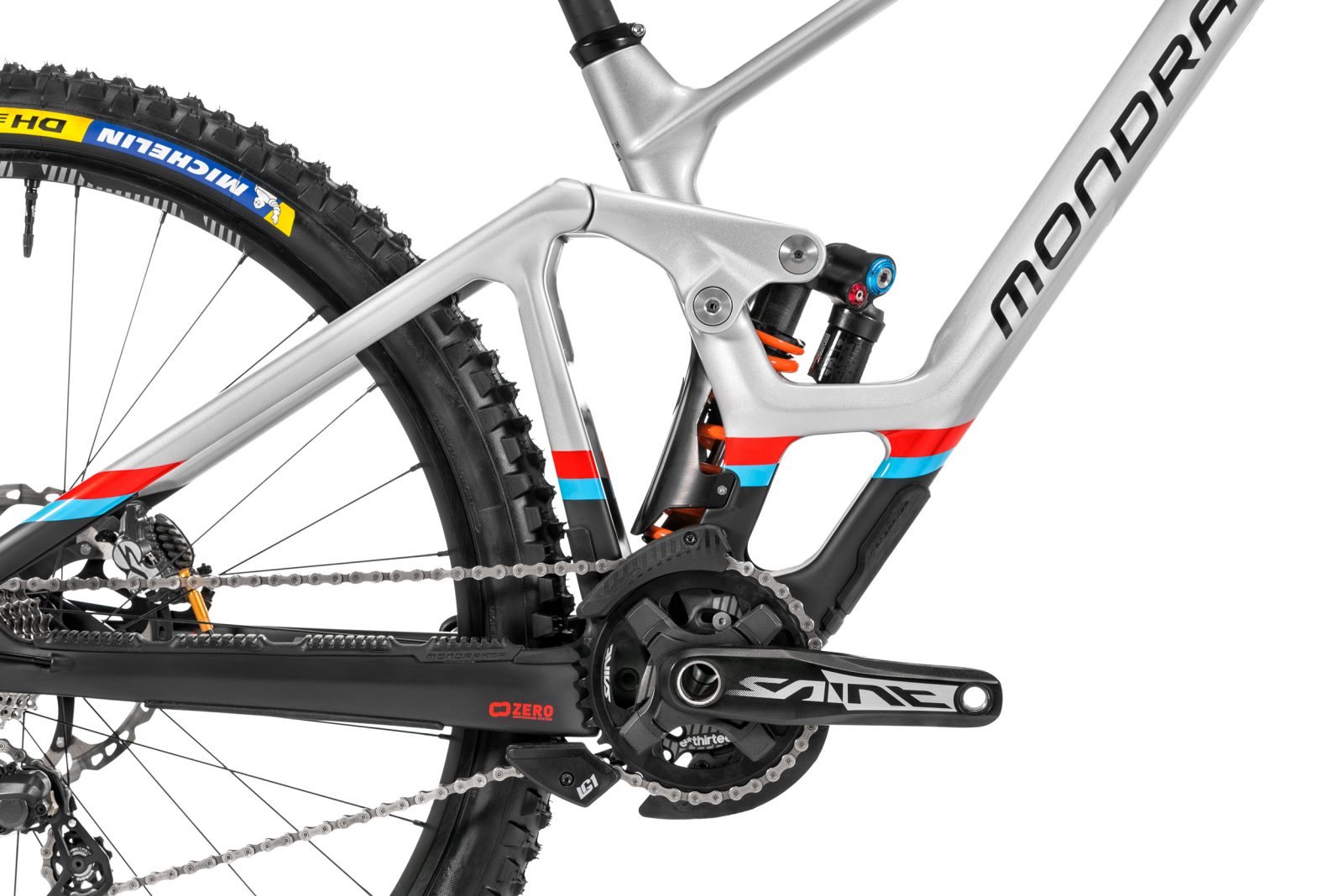 Summum Carbon debuts MIND technology on both the Summum Carbon RR and R models. With MIND you can adjust the sag perfectly followed by accurate set-up recommendations which allow you to truly get the most out of your ride. MIND collects data in real time, recording the operation of both front and rear suspension while you’re riding for later analysis via the myMondraker App on either your mobile device or PC. 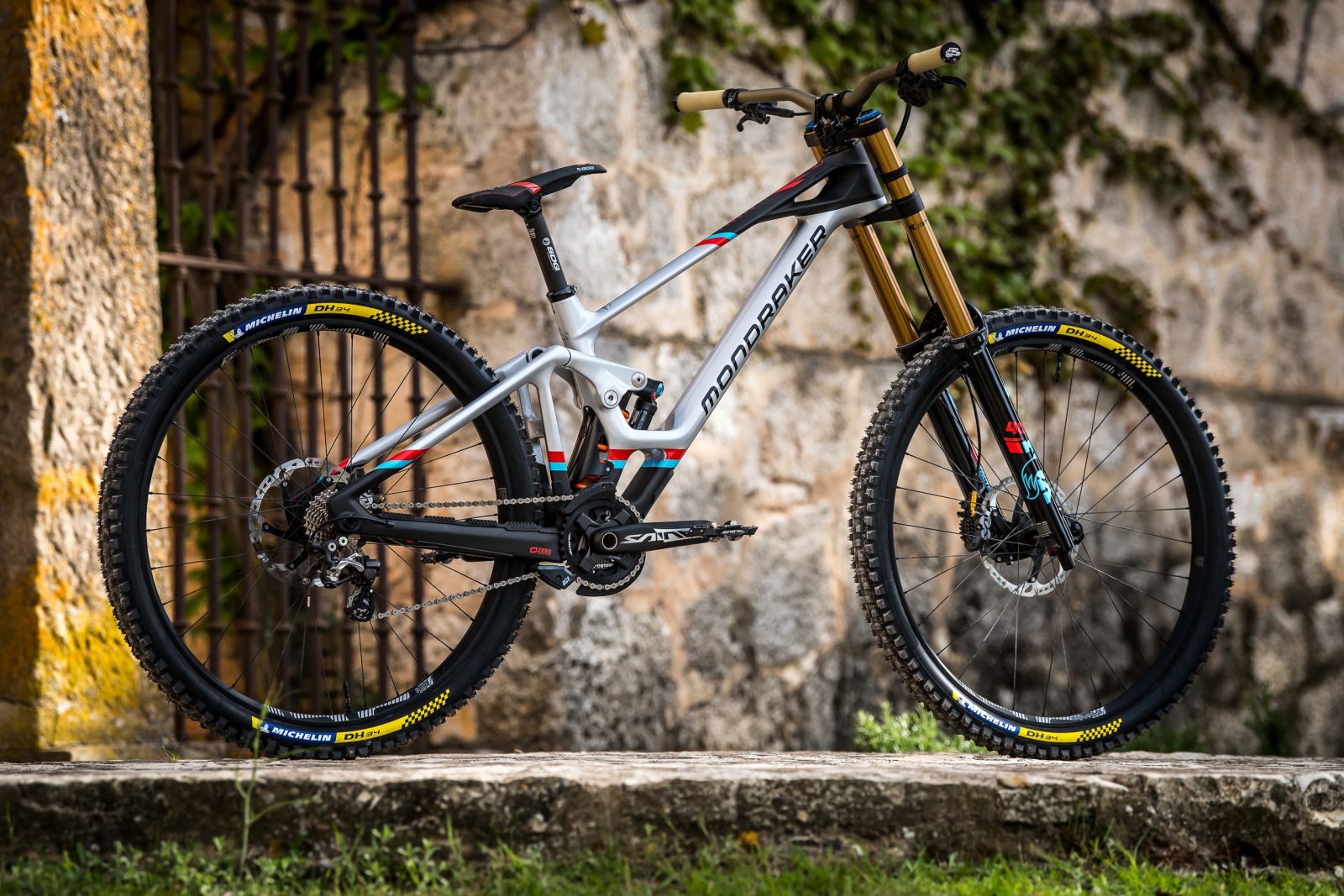 MIND collects and stores all of the parameters of your bike while you’re riding, as to some extent do other GPS devices, but MIND also collects all the data related to your bike’s suspension travel and speed, such as the travel used at any given time, time you’re off the ground including all the parameters related to the jump (length, time airborne, suspension travel on landing, as well as if you bottomed out) with the perfect geolocation of where and when it happened on the map thus allowing you to tune the suspension perfectly to each track, every time.

Two of the key performance aspects that differentiate the Summum Carbon from the competition are its lightness combined with the new conception of its ZERO suspension system’s kinematics. A frame with a totally optimized design ready to win races and emulate our MS-Mondraker riders, or to take on the gnarliest descents in your favorite bike park. 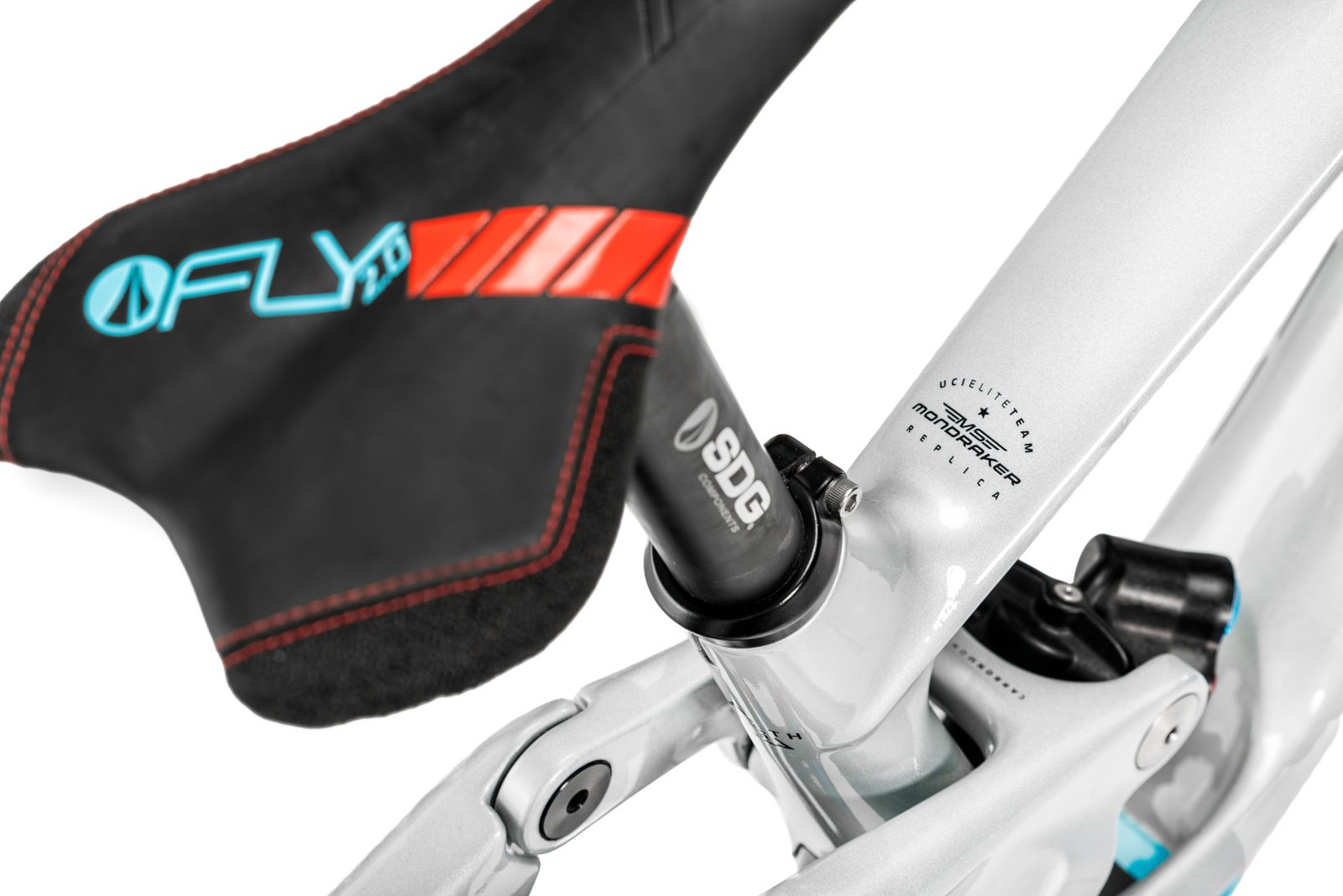 We’ve applied all of our knowledge and accumulated experience working on the most advanced carbon frame manufacturing technologies from all the different mountain bike disciplines here at Mondraker to the Summum Carbon. We wanted to move away from the conventional and adopt a different design language far from the classic, bulky, antiaesthetic frames found on most downhill bikes. We’ve gone for more profiled lines and a visually more pared down, refined, far more elaborate appearance with the aim of not only creating the fastest and most efficient DH bike ever built, but also the lightest and most aesthetically distinctive one possible, with sleek and aggressive styling the mere presence of which speaks for itself.

Summum Carbon introduces numerous geometric improvements, the redesigned ZERO SUSPENSION SYSTEM has evolved to be the most capable to date on a downhill bike but, above all, we’ve produced a frame with its own personality and style, created with the most advanced carbon manufacturing process in the world: STEALTH AIR. 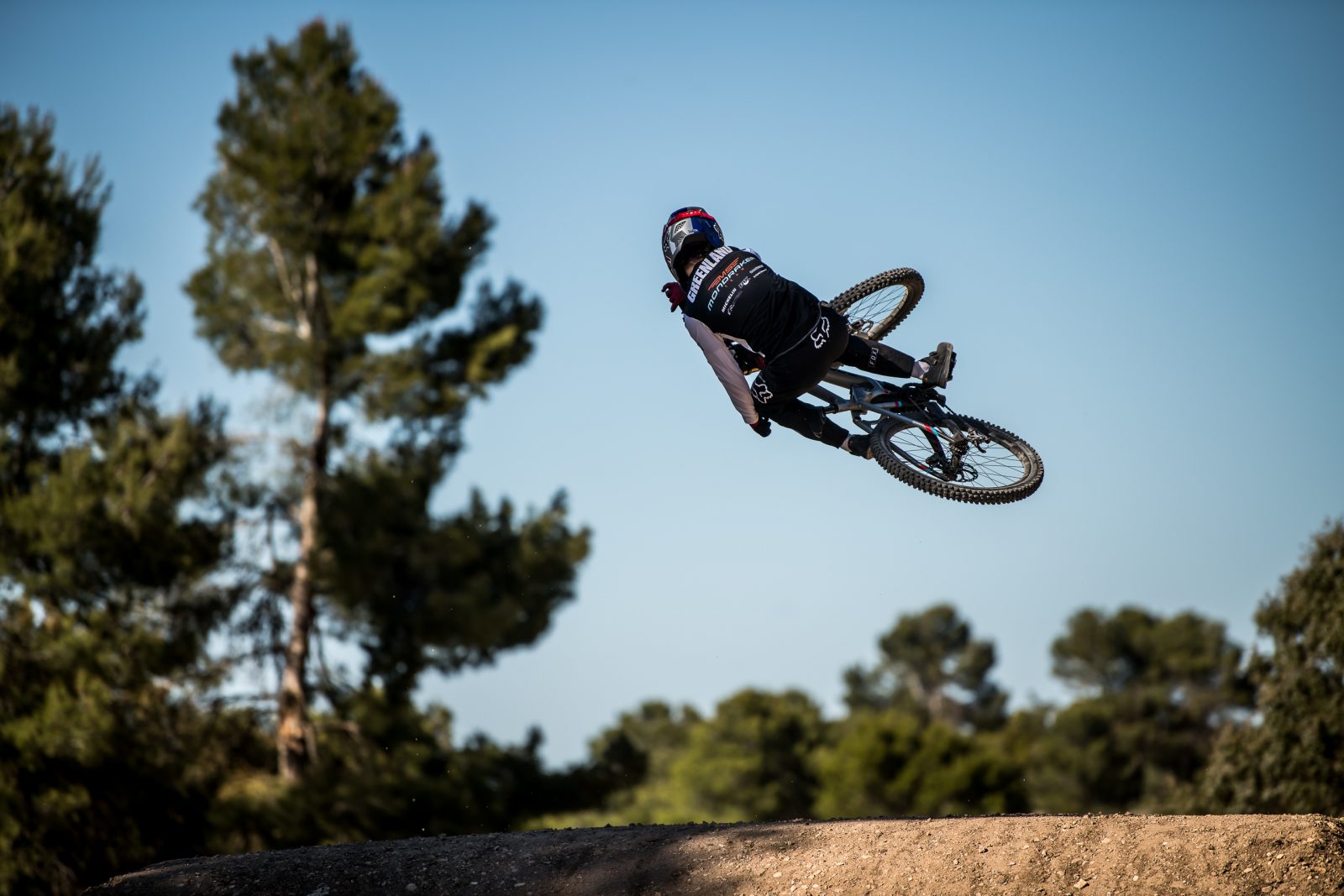 As Luis Martínez, Global Product Manager at Mondraker explains: “We’ve managed to improve on what, a priori, seemed almost unbeatable: The bike with which we won the Val di Sole World Championships and which monopolized the podium taking home all three medals: Gold, silver and bronze. The evolution of the Stealth Air manufacturing process in the conception and creation of this new Summum Carbon translates to a clear structural improvement to its frame and an improved suspension system, the latter having gained more sensitivity early in its stroke but also more progression towards the end, all of which adds up to a significant performance improvement on today’s demanding World Cup circuits. That combined with the multiple customization options and geometry adjustments possible, continue to make the Summum a truly unique model and the gold standard in Downhill racing bikes since we launched it in 2010.”

For his part, Andrés Climent, Mondraker Design Engineer, highlights that “What we have sought in the manufacture of the new Summum Carbon is visual lightness without compromising the rigidity of the whole. In addition to following the aesthetic lines of the FPodium, Foxy and Crafty with visual continuity of the toptube down through the seatstays, we have perfected the mechanics of the system. The pivot points have the same angular contact bearings with a double row of bearings to provide greater rigidity and smoothness. The rigidity of the whole is optimal and very low maintenance, a key factor on any downhill bike.” 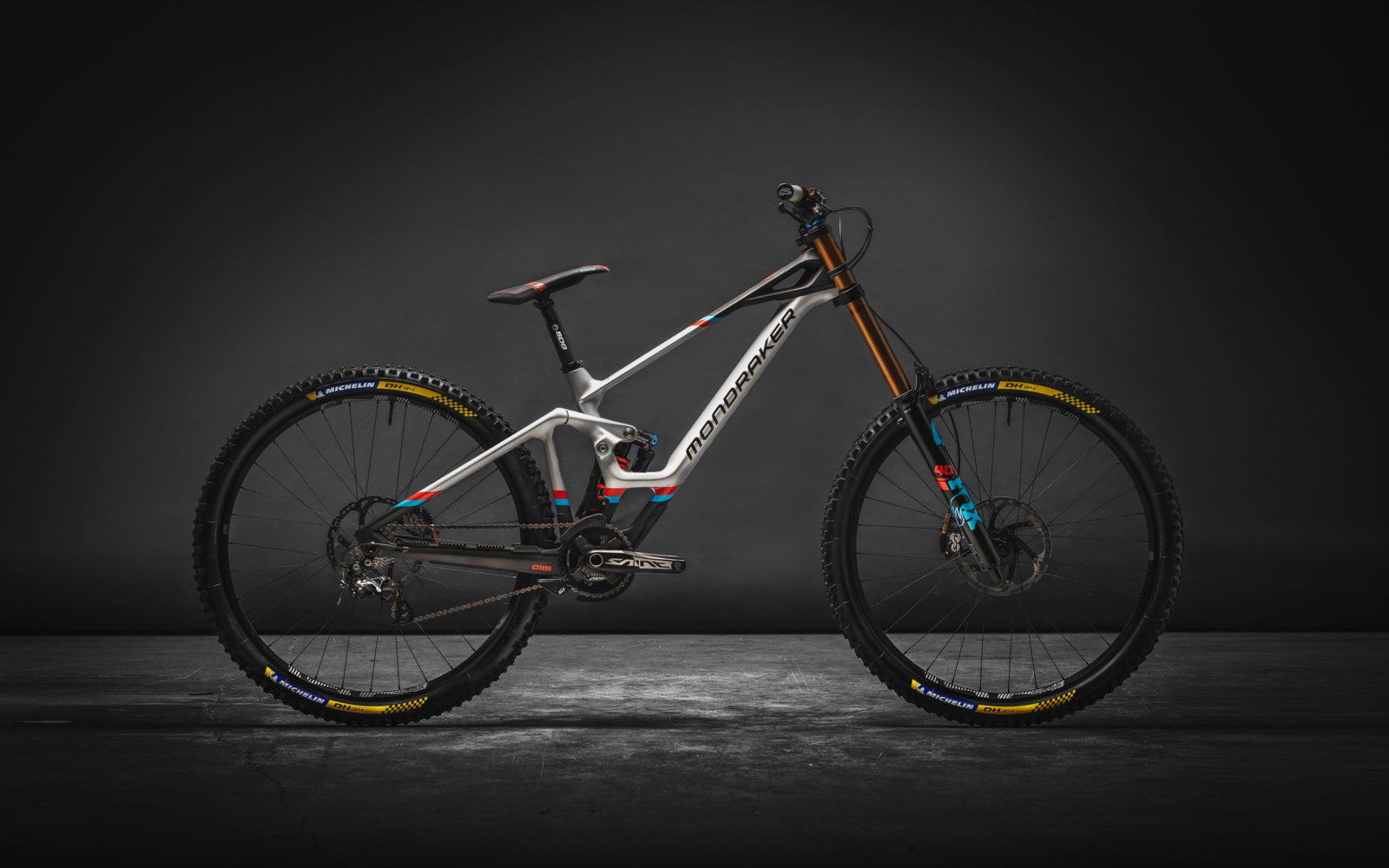 Mondraker Presents The Raze and an Updated Foxy