The UCI DH World Cup is finally back in the limelight with the Maribor race that started off the 2019 season. The final of the first stage of the season ran on a sunny day thanks to fact that the track managed to totally dry out after yesterday’s rain, which made the qualifying heat particularly difficult. The DH world cup returns to the Slovenian town after nine years of absence, celebrating one of the more iconic tracks for this discipline as it hosted the world circuit from 1998 to 2010.

The three-time world champion Loic Bruni celebrated his first win of the season in Maribor by putting down a precise and blazing run, progressing constantly and with great concentration along the entire track. 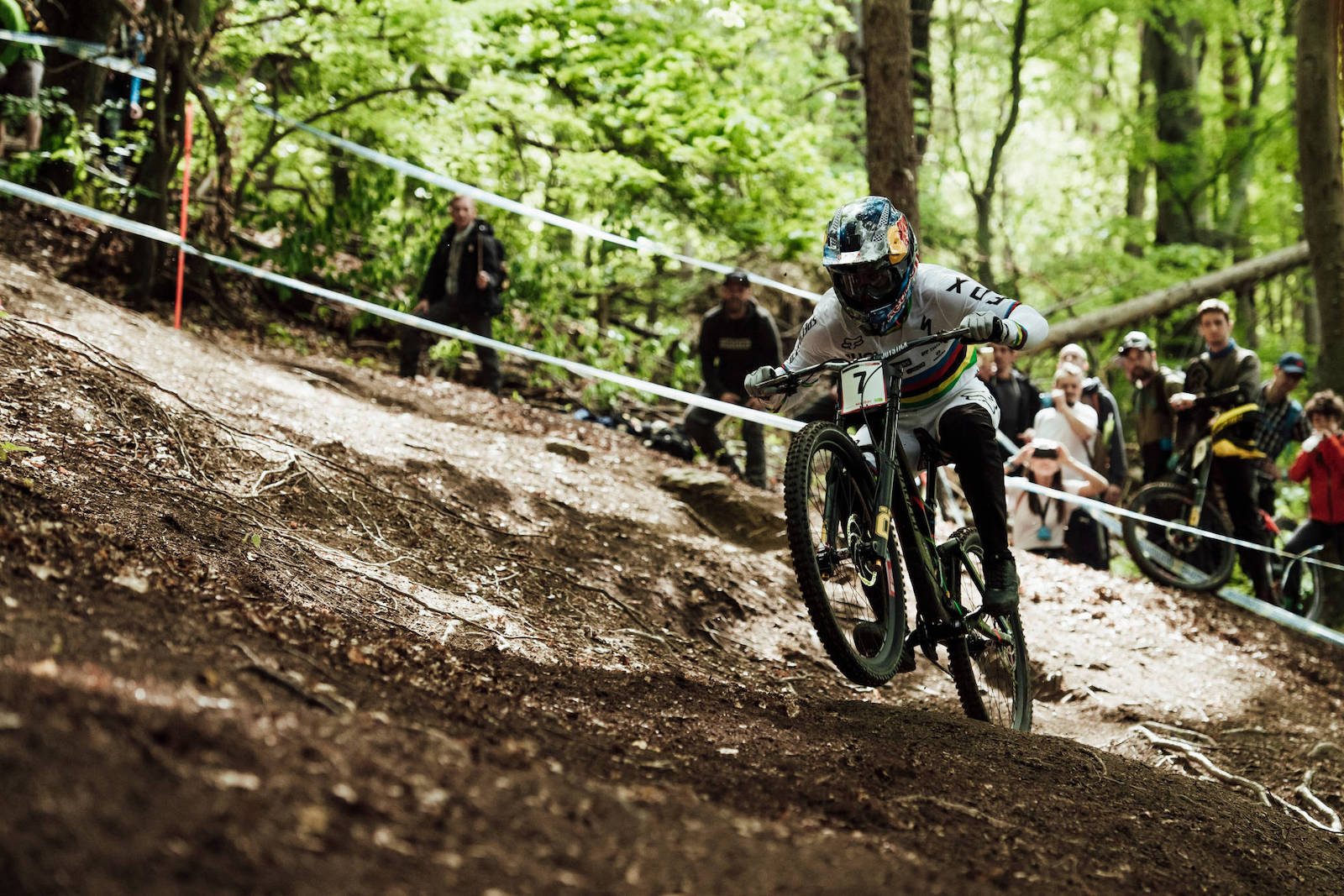 The reigning world champion was the only one capable of besting the time of Danny Hart who raged down the track, with his signature style when he is particularly fit, attacking the Slovenian track from top to bottom. 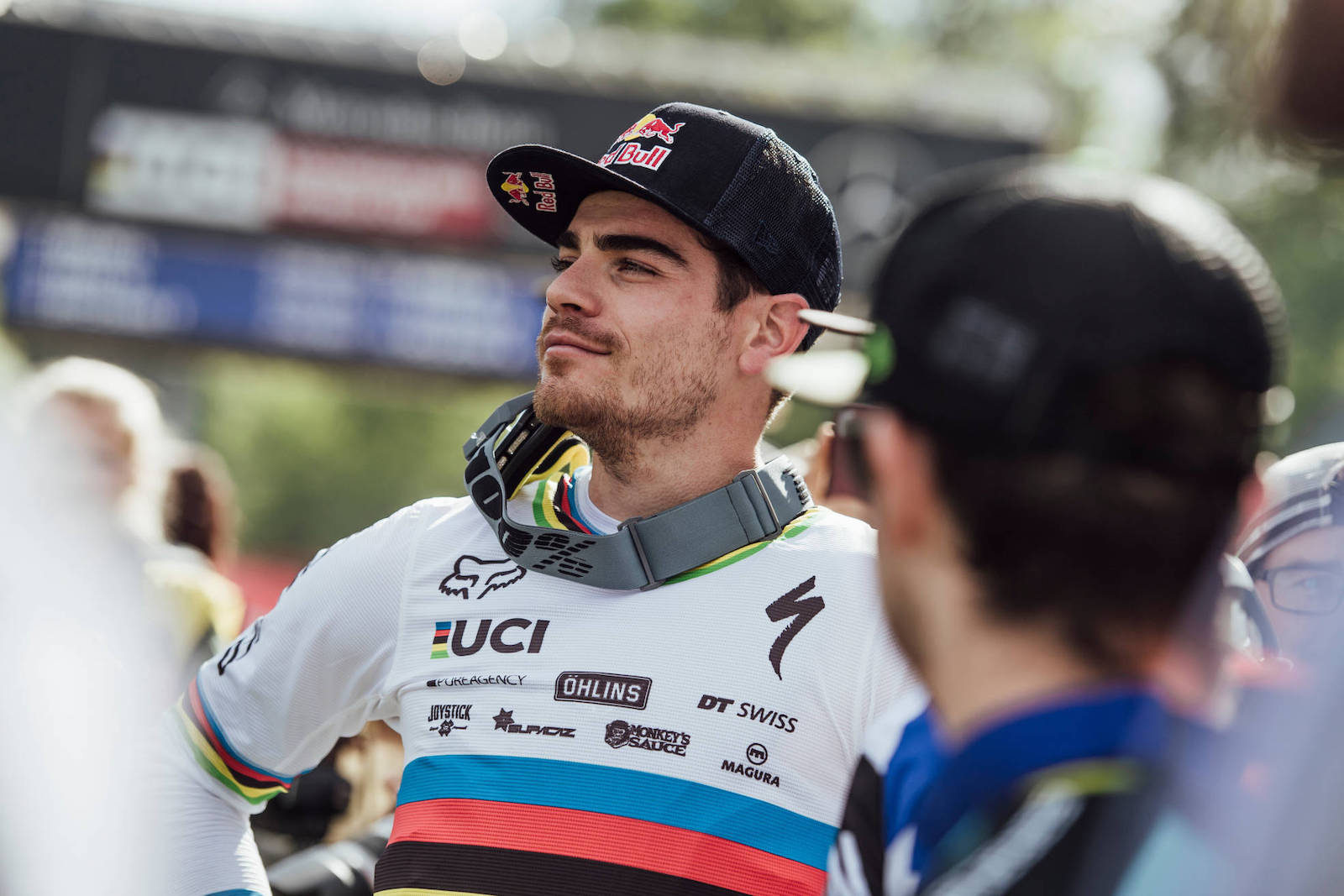 Both Bruni and Hart raced on bikes with a hybrid wheel format, so with a 27.5 rear and a 29 front wheel, thanks to the UCI change of rules that only this season allows wheels with different diameters to be used. A standard 27.5″ set up was instead used for Troy Brosnan’s Canyon Sender which put him in third place, just over 7 tenths from Bruni’s time. 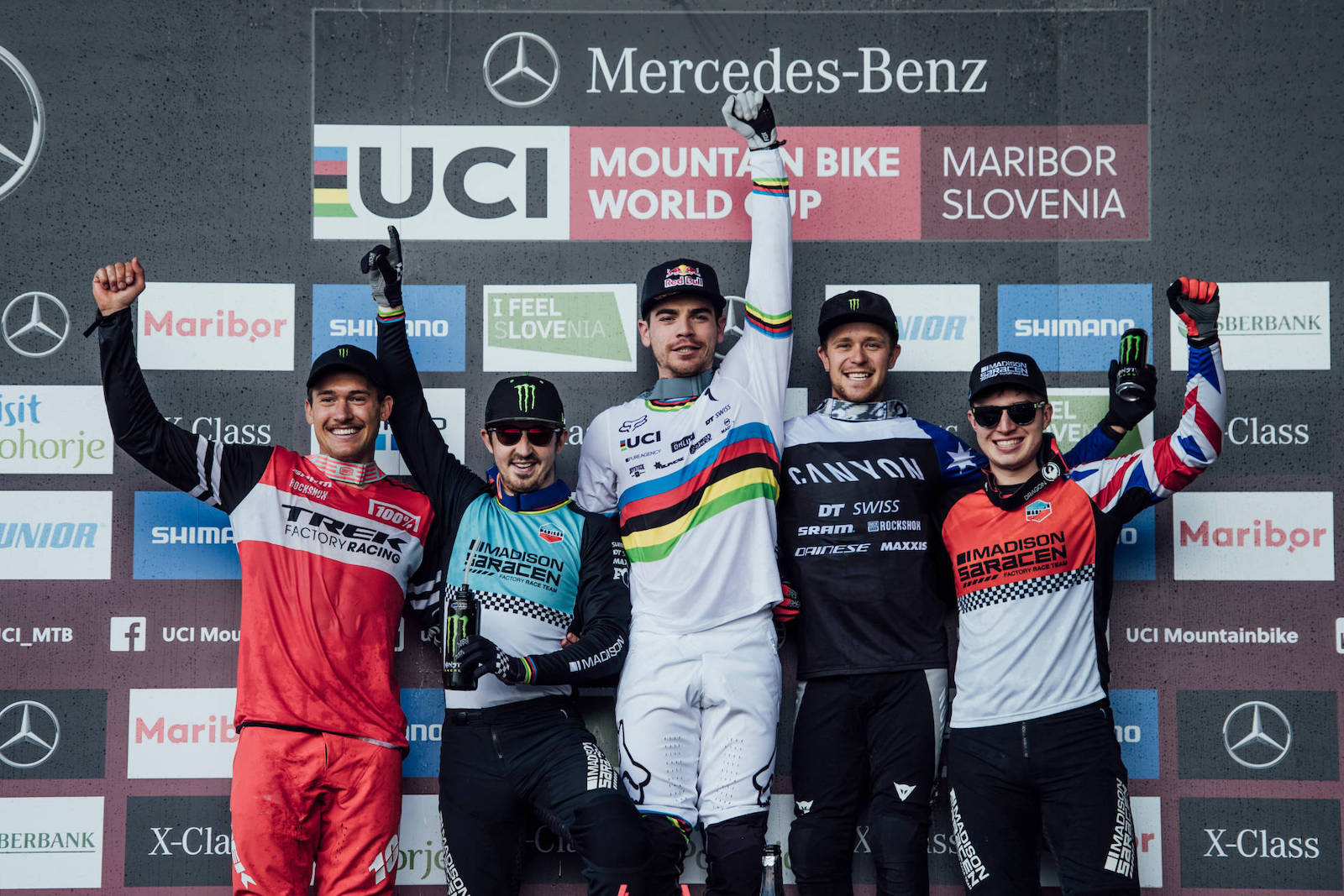 US rider Charlie Harrison’s came out swinging with a solid fourth place followed by Hart’s teammate, Matt Walker, in fifth. The 2019 season sees a new change of the guard, with Gwin “only” sixth and Pierron, winner of the 2018 overall, in seventh position, while Minnaar failed to qualify yesterday due to a fall. 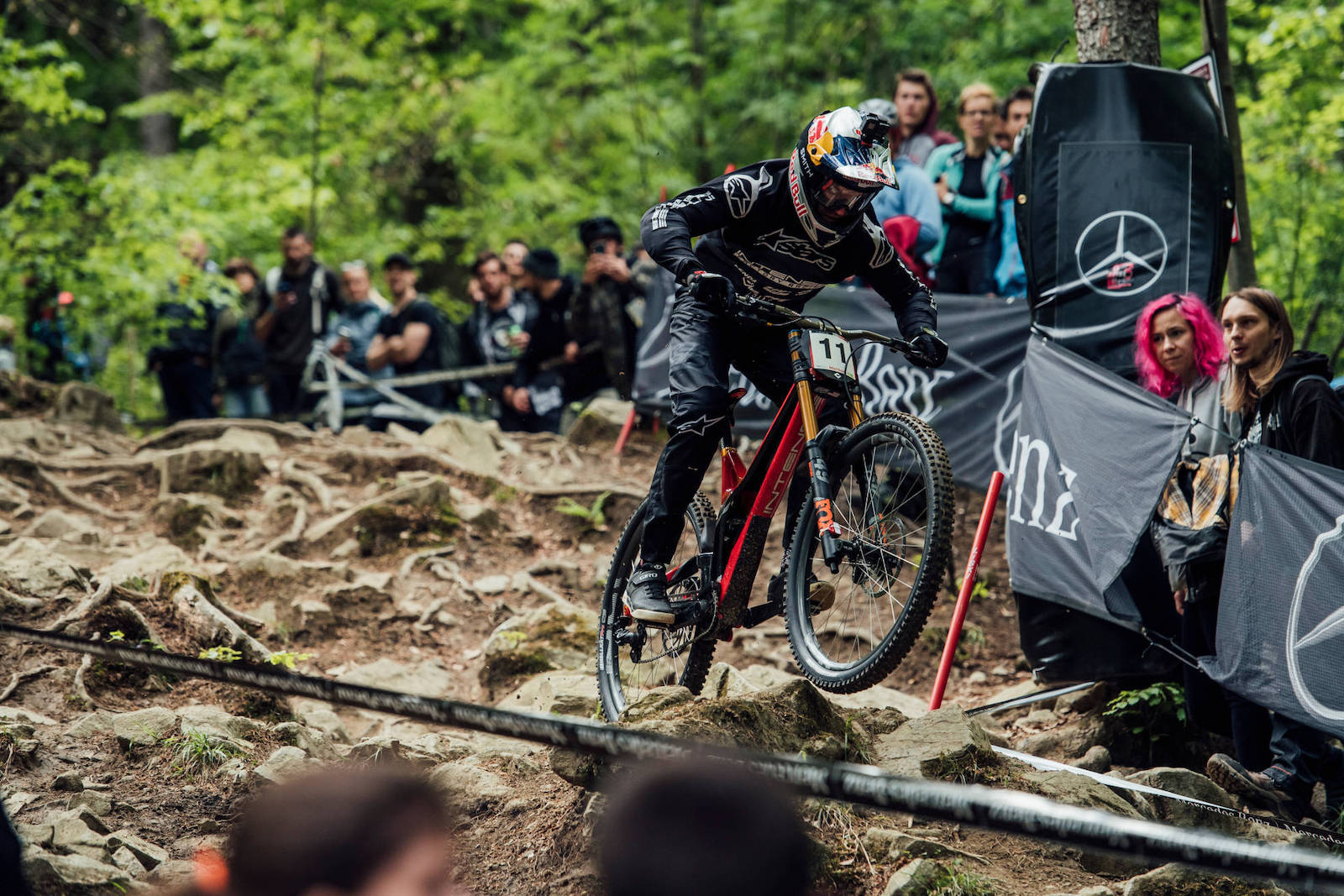 A fall has stopped both Vergier and Iles from laying down excellent runs. 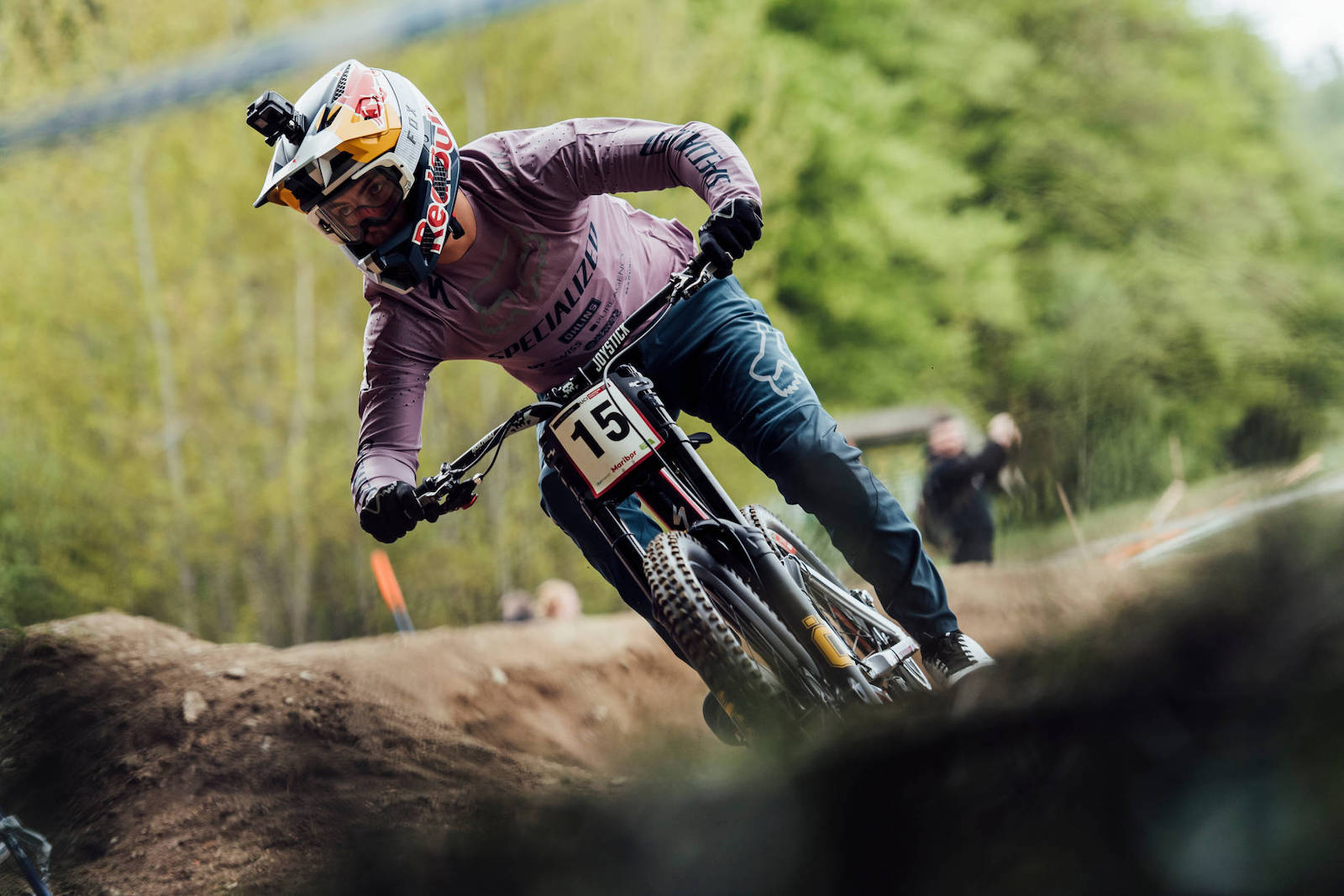 Tahnée Seagrave took the female category by storm in this season’s opener on the Maribor track. 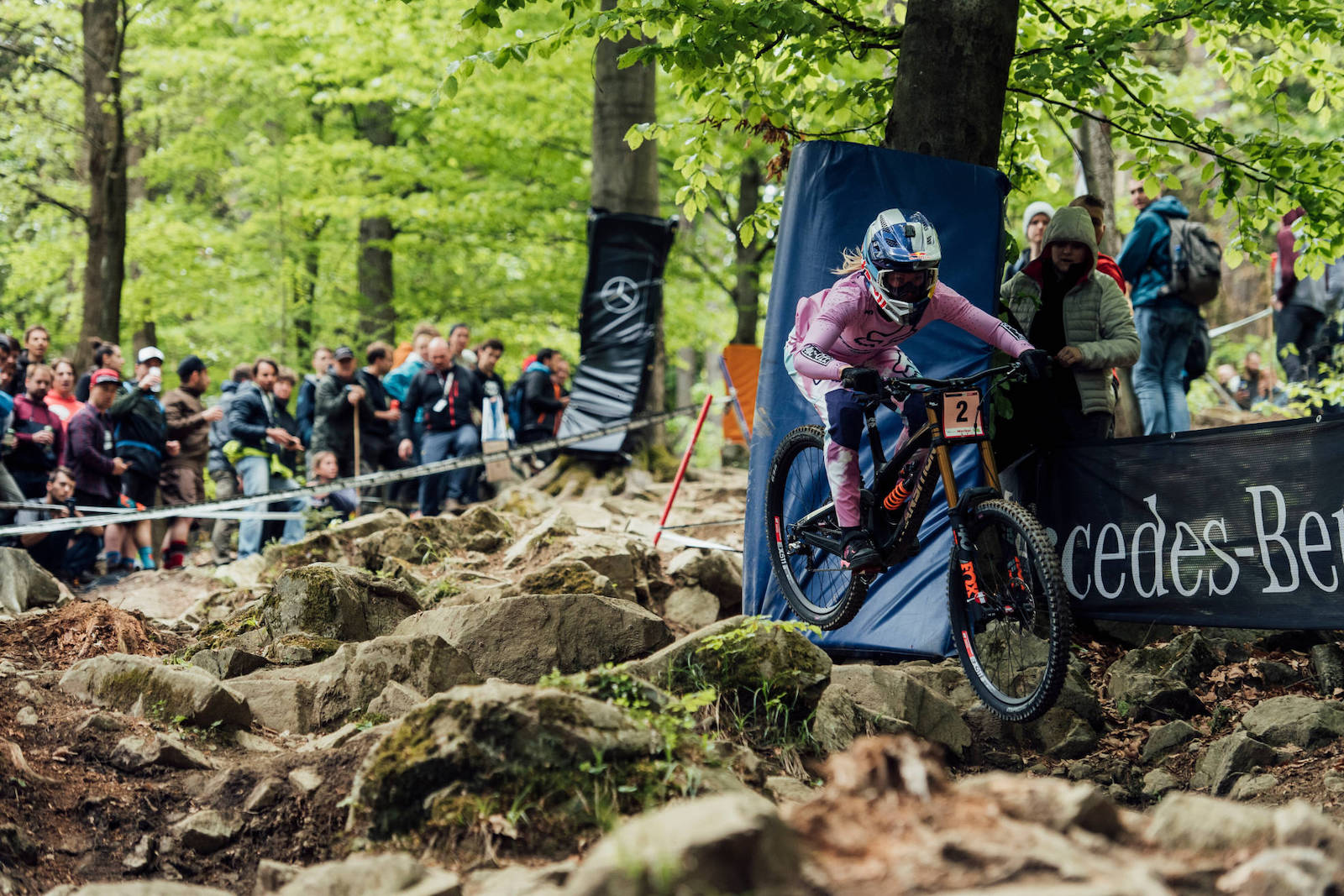 A steady and clean run earned the young British athlete an advantage of 8 tenths of a second over her main challenger. 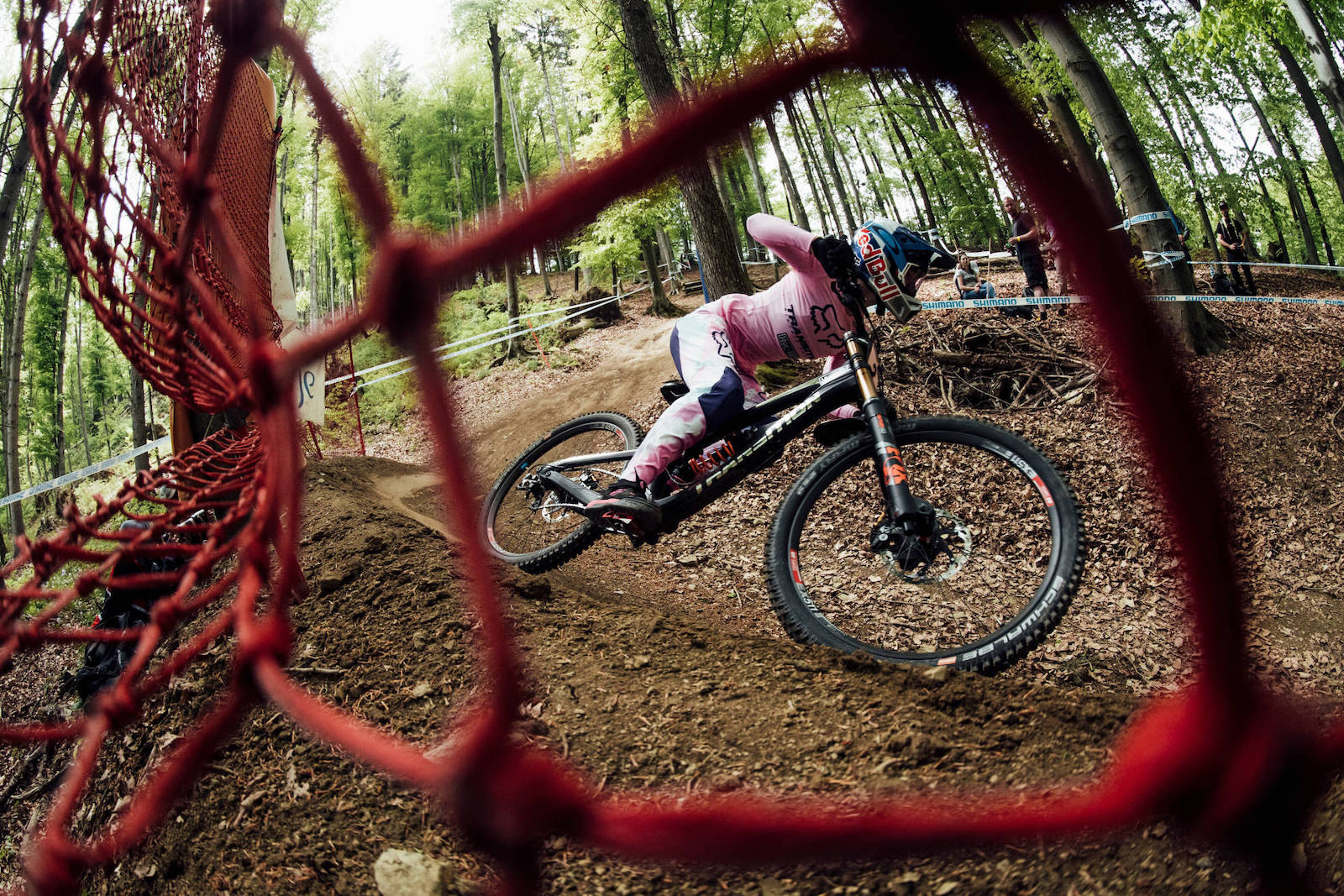 The world champion and ruler of the 2018 season Rachel Atherton made her debut between the tape riding her namesake Atherton Bike, finished in second place without being able to impress as she has always done in the past two seasons. 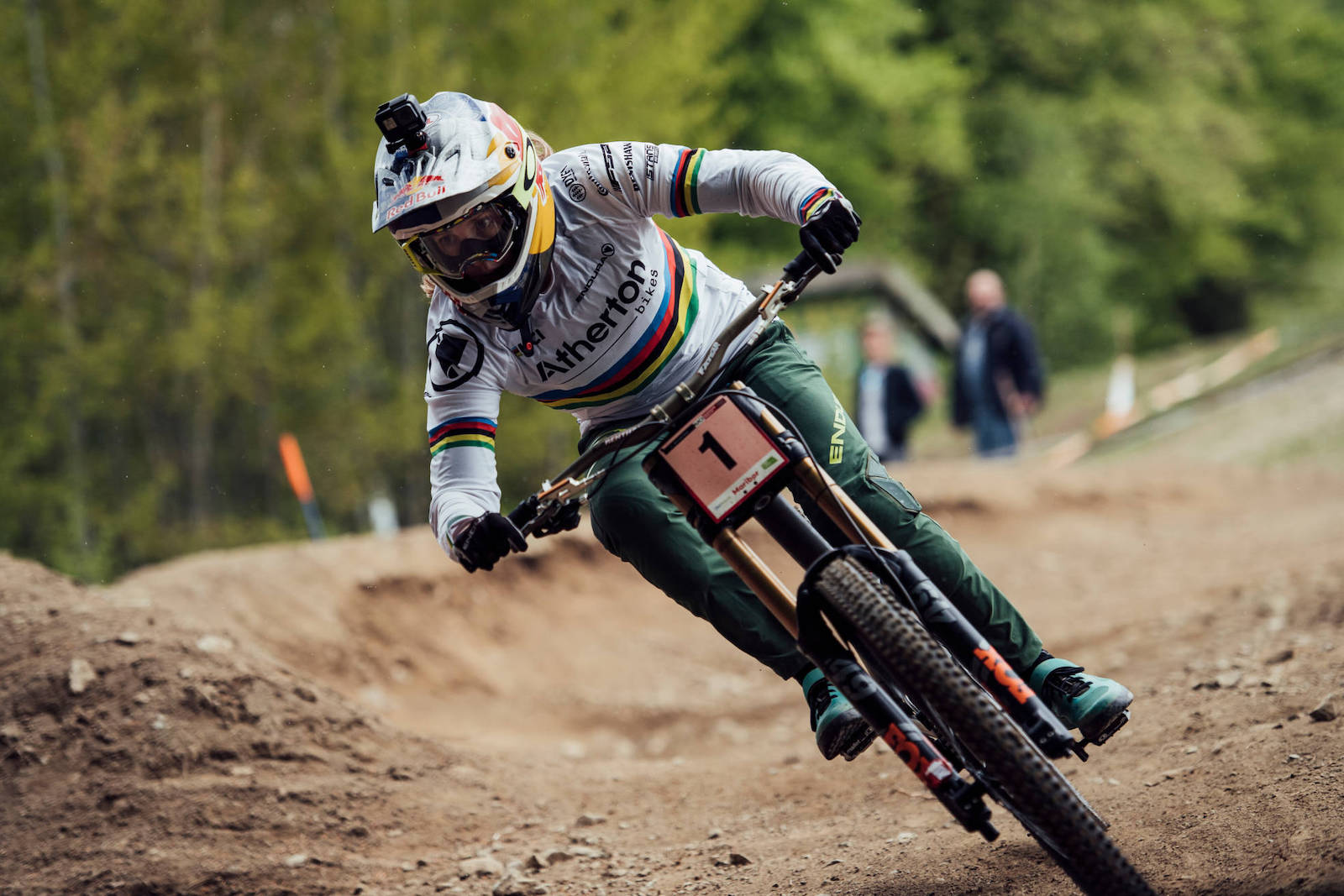 Third position for the winner of the qualifying heats, Tracey Hannah, determined more than ever to climb at least once on the first step of the podium in her long career. Marine Cabirou followed in fourth place, who seems to have made some serious gains in the off season. 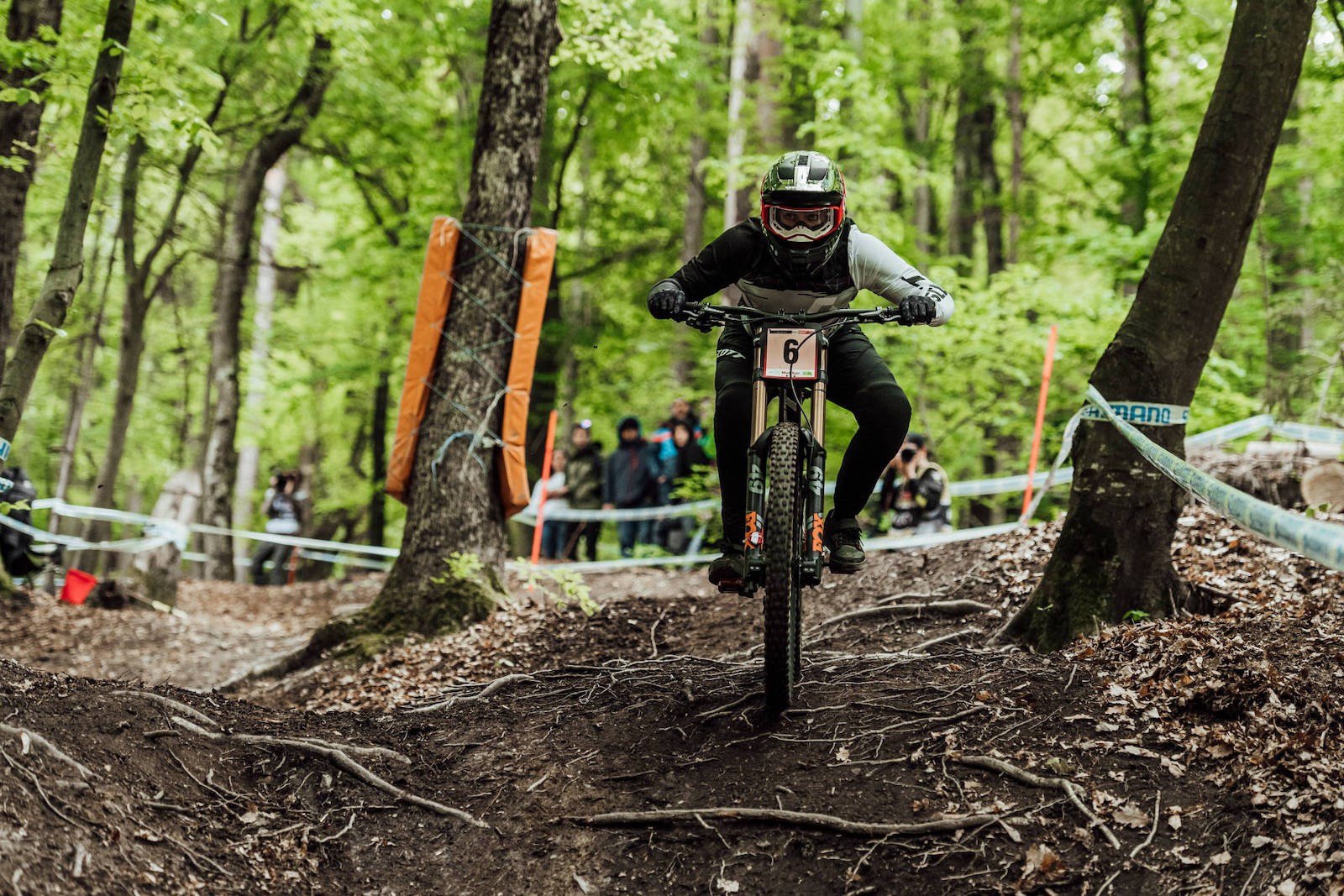 The Slovenian Monika Hrastnik received the applause of the home crowd from the fifth step of the podium. 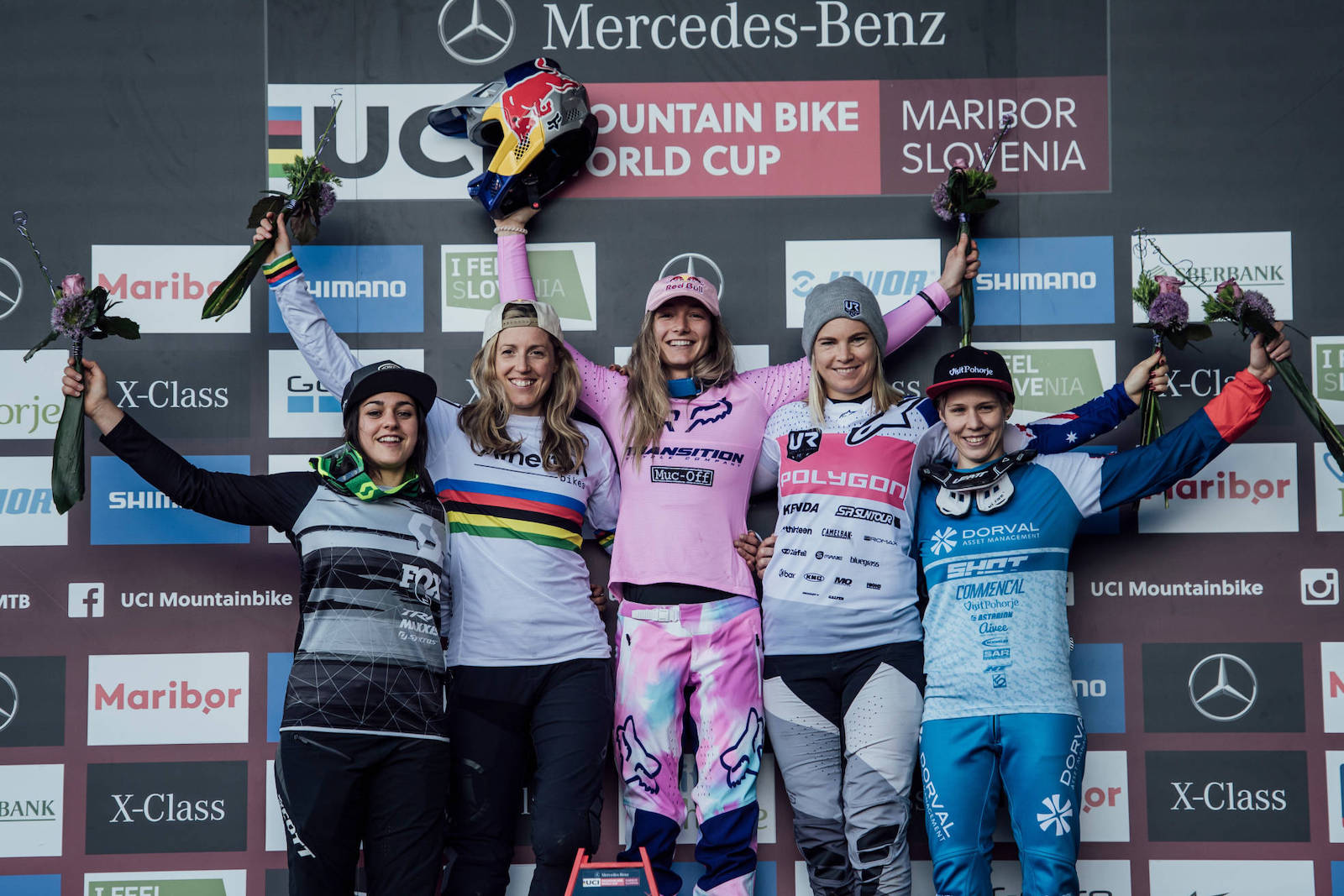 Eleonora Farina and Veronika Widmann did very well and placed respectively in seventh and eighth place.

The Junior class follows yesterday’s qualifying heat, with Commençal’s Thibaut Daprela, already winner of the 2018 overall claiming victory. He was followed by Canadian Ethan Shandro, son of freeride pioneer Andrew Shandro, in his first year in the world Cup. Third position for Kye A’Hern, the Australian from Canyon Factory Racing who received a silver medal at the world championships in Lenzerheide last year. Lucas Cruz closed out in fourth position followed by fifth place from the Portuguese racer Gonçalo Bandeira, also in his first season as Junior.

The world champion Valentina Höll is confirmed as the great athlete who made herself known during the last season, also kicking off the 2019 circuit with a victory. 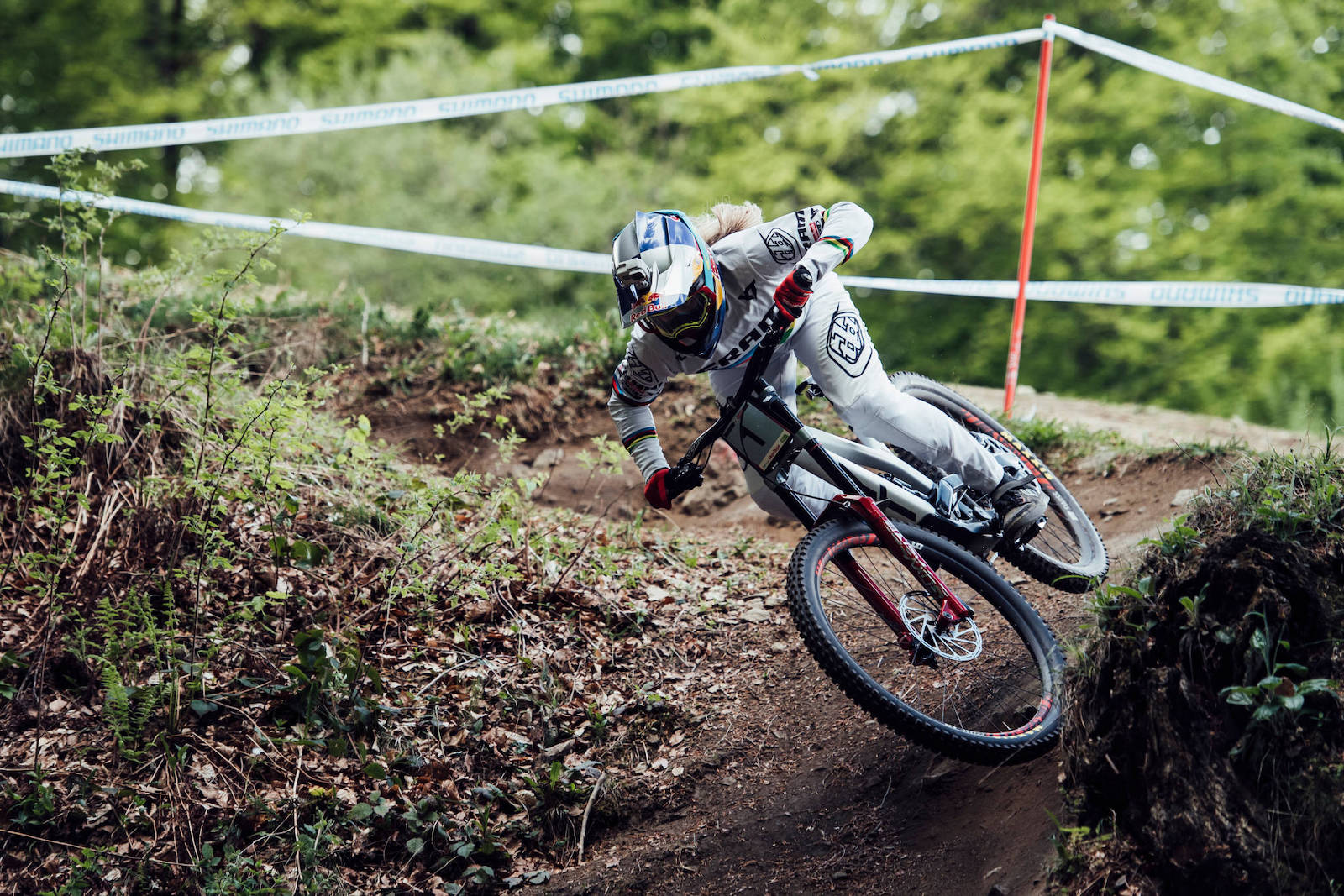 The striking performances of the young Austrian are partly eclipsing those of her rivals but it is important to highlight how the female Junior category has never been so prolific in terms of talent, with two other high potential athletes, Anna Newkirk and Mille Johnset, respectively second and third today in Maribor. Next season they will revive the Elite female category.

[Video] Italian XC sliding fest with Schurter and other pros