There were twists, turns and high drama at EWS Sugarloaf as a revitalised Isabeau Courdurier (Lapierre Zipp Collective) extended her lead in the 2022 Enduro World Series with a faultless technical display to take the win at the sixth round here in the US state of Maine.

And Canada’s Jesse Melamed (Rocky Mountain Race Face) did the same, riding to another victory in the EWS Men after his closest rivals – the USA’s Richie Rude (Yeti/Fox Factory Team) and Canyon Collective’s Jack Moir struggled with crashes and mechanicals.

Courdurier, who struggled through the first two of three back-to-back rounds in Canada and the USA, found her form and fitness again here in Sugarloaf storming to victory on the tricky roots and rocks of the brand-new venue. The 28-year-old struck first on the Pro Stage on Saturday (Aug 20) and then again on S2 on Sunday morning. In fact she didn’t drop out of the top four on a day she capped off with victory on the final of six stages.

In the end it was Britain’s Rebecca Baraona of the Yeti/Fox Factory Team who would take second after a win on the Queen Stage – S3, the 4.2km-long tester named 355. Fellow Briton Ella Conolly (Cannondale Enduro) took third after a win on the penultimate stage of the day. The UK’s Harriet Harnden (Trek Factory Racing) missed the chance to make round six three in a row after an arm injury flared up and prevented her from starting. 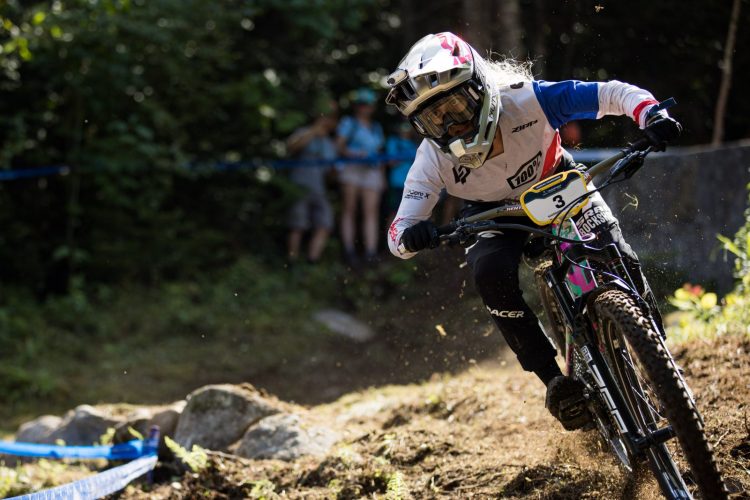 Courdurier will go into the final block of two European races with a 295-point lead over France’s Morgane Charre (Pivot Factory Racing) with Bex Baraona in third.

In the EWS Men’s race it looked like last week’s winner at EWS Burke, Richie Rude might cruise to victory on home soil again until disaster struck for the American with crashes on the highly-technical stages four and five, the second of which injured his shoulder. Rude had won the Queen Stage – stage three – by some 14 seconds to take a lead of more than 21 seconds into the second half of the race. But it wasn’t to be after the Connecticut rider washed his front wheel out on stage four and then damaged his shoulder in a crash on stage five losing swathes of time.

2021 series champ Jack Moir also looked like he might give EWS Whistler winner Melamed a run for his money but a puncture and a damaged rear wheel on the rocky start of the Queen Stage quashed his day’s ambitions, costing him some 10 minutes.

It was Orbea Fox Enduro Team’s Martin Maes who came closest to the Canadian in the end, just 3.66s back after nearly 27 minutes of racing. EWS Sugarloaf Pro Stage winner, New Zealand’s Matt Walker (Pivot Factory Racing) was third. Melamed will don the yellow plate of series leader at the seventh round of the EWS in the Swiss resort of Crans Montana in mid-September. Rude trails Melamed now by 450 points and Maes is in third. 2021 champ Moir is left with a mountain to climb after dropping to eighth after finshing the sixth round in 107th.

In the U21 Women, there was a dominant display by Italy’s Sophie Riva who made it two EWS wins in a row by taking all six stages at Sugarloaf to end up nearly 39 seconds ahead of Chilean Paz Gallo Fuentes. USA’s Lauren Bingham was third.

In the U21 Men, Canada’s Seth Sherlock followed up his EWS Whistler victory with another and in a time that would have put him in 11th in the senior field. His compatriot Emmett Hancock was second and USA’s Jake Keller third.

In the Master 35+ Women, it was Canada’s Ingrid Larouche who finished 24 seconds ahead of Melissa ‘Mops’ Newell of New Zealand. The USA’s Mary McConneloug was third.

Team of the day were Pivot Factory Racing, who lead the serie.