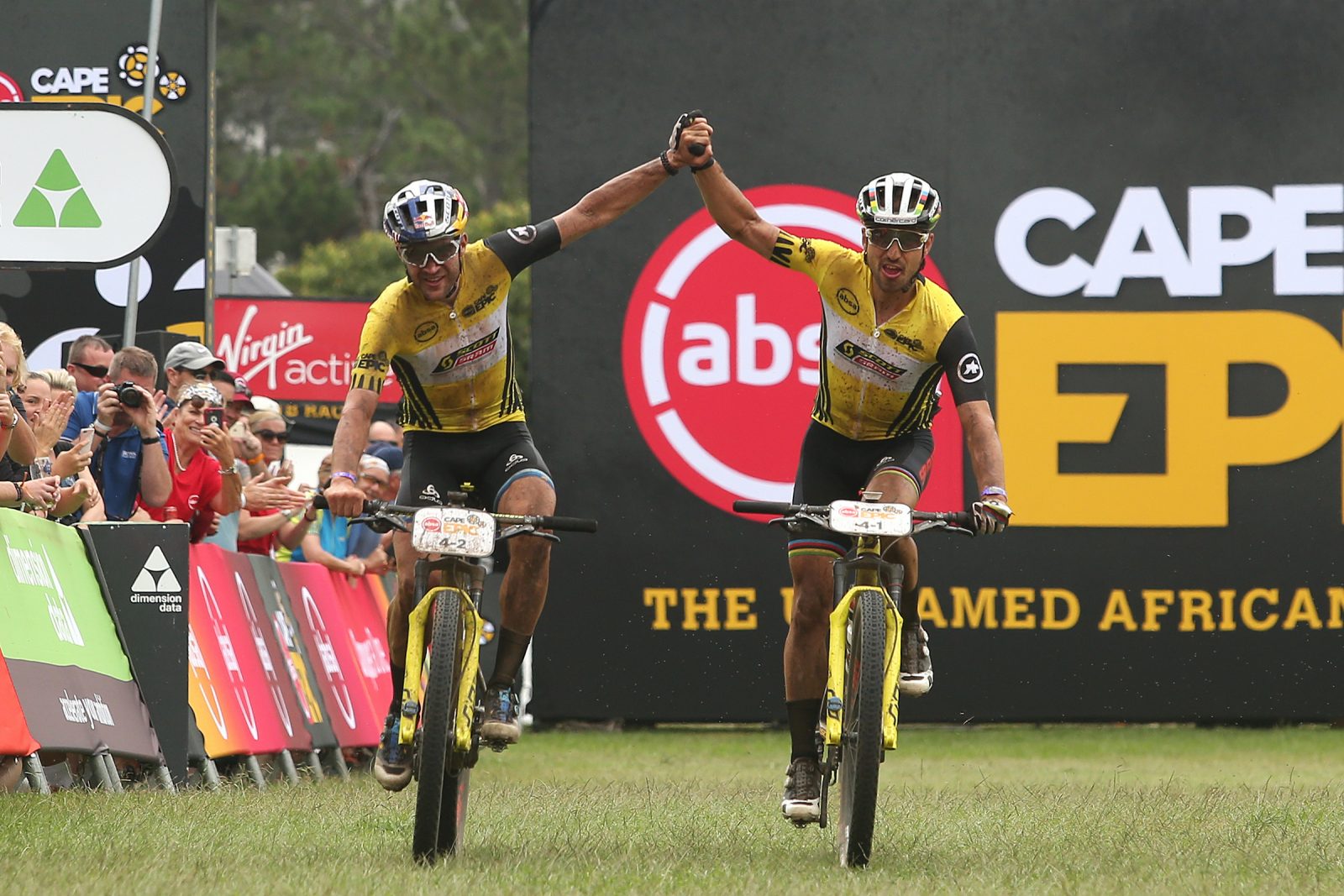 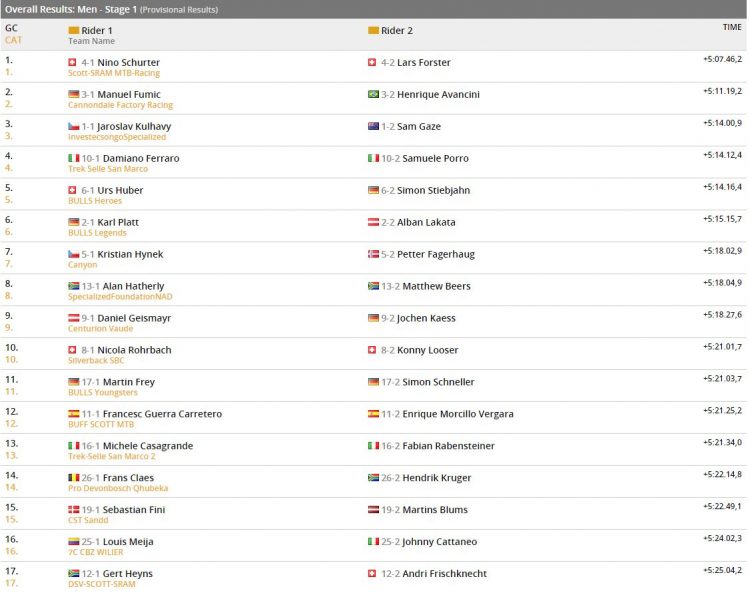 Stage 1 of the Absa Cape Epic was a day of consolidation with both the top men and women growing their leads significantly after a tough 111km day which started and finished in Hermanus on Monday.
Prologue winners Annika Langvad and Anna van der Breggen (Investec-songo-Specialized) increased their lead in the Women’s race with a dominant performance that saw them ride away from their rivals early and set up a lonely journey back to the start/finish.

After their nearest rivals allowed the Danish / Dutch pair to break away on the early climbs out of Hermanus, the Investec-songo-Specialized team grew their overnight lead to a huge five-minute 42-second advantage. Kross-Spur Racing’s Ariane Lüthi (Switzerland) and Maja Wloszczowska (Poland) are second after finishing Stage 1 over three minutes behind. 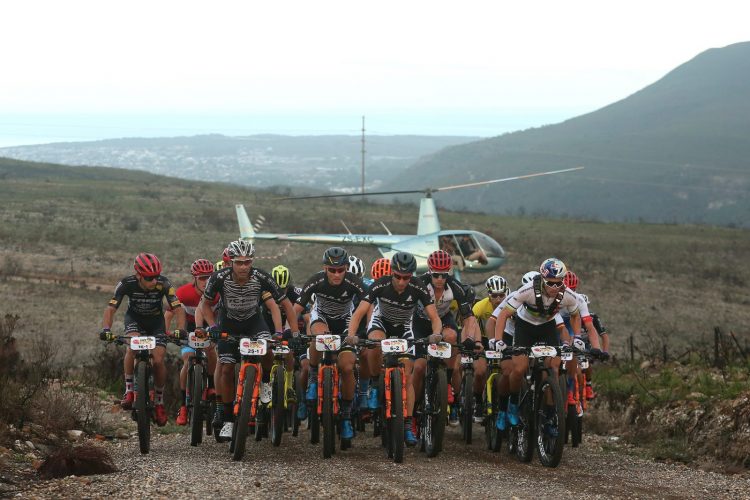 Such is the dominance of the leaders that Wloszczowska admitted afterwards that they “did not even try and stay with (Langvad and Van der Breggen). If we had tried to go with them at the beginning we would have killed ourselves.”

In contrast, the Men’s category was a tough battle for nearly 80km until the all-Swiss pairing of Nino Schurter and Lars Forster (Scott-SRAM MTB-Racing) finally saw off the challenge of Manuel Fumic and Henrique Avancini (Cannondale Factory Racing) with a brutally efficient tactical attack. 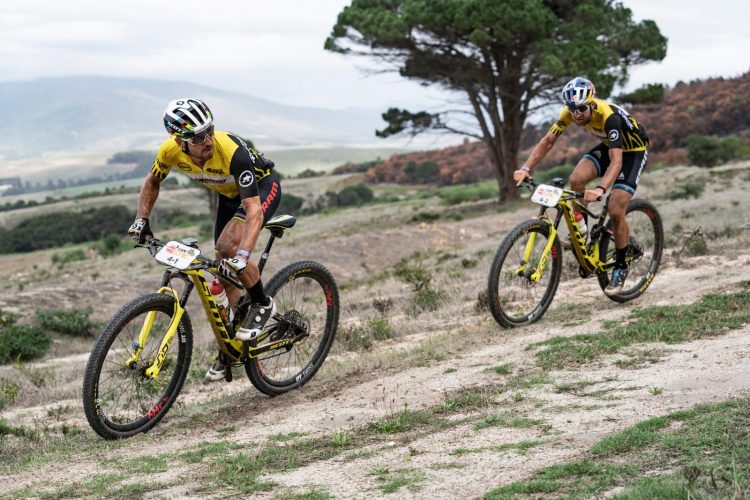 Earlier a three-team break looked ready to fight to the finish, but Sam Gaze had a fall which cracked his helmet and left him groggy – and meant he and his Investec-songo-Specialized partner, defending champion Jaroslav Kulhavy, faded back into the chasing group and out of contention for stage honours.

The remaining two teams only split with about 30km to go when Forster and Schurter launched a clinical tactical attack that left the Cannondale pair with no chance of fighting back. In the end Schurter and Forster crossed the line 2:51 ahead of the Cannondale Factory team to extend their lead to 3:33 overall. Pre-race co-favourites Gaze and Kulhavy moved up to third overall despite their troubles. 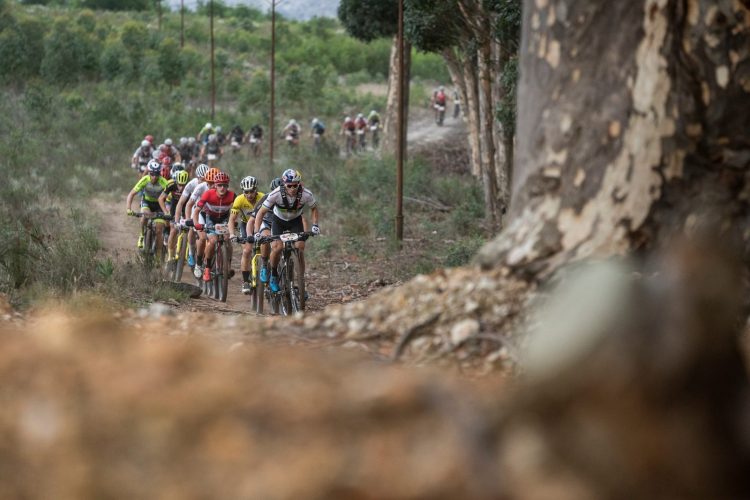 The race for the Absa African Men’s Jersey saw Alan Hatherly and Matt Beers (SpecializedFoundationNAD) grow their lead to ten minutes after Philip Buys and Matthys Beukes struggled in the heat at the end of the stage. The PYGA Euro Steel pair have now slipped back to third behind Imbuko Giant’s Marco Joubert and Nicol Carstens. 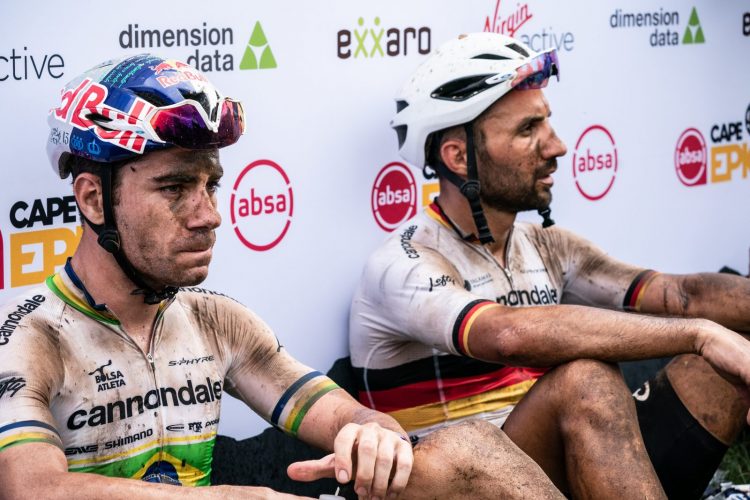 The Absa African Women’s Jersey race was a triumph for the dormakaba Ladies combination of Samantha Sanders and Amy Mcdougall who are now a massive 42 minutes clear of Galileo Risk’s Theresa Ralph and Sarah Hill.
Crowd favourite and former World Champion Jose Hermida and his Merida Factory Racing partner, Joaquim Rodriguez, grew their lead in the Dimension Data Masters category by almost 11 minutes and now lead the Dutch pair of Erik Dekker and Maarten Tjallingii (IBS Capital Allies) by over 14 minutes. 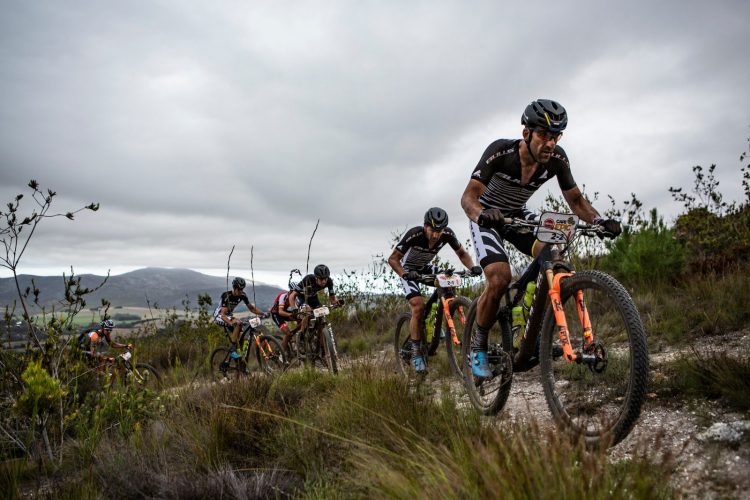 In the Grand Masters, Brazilian Abraao Azevedo and former winner Bart Brentjens (CST Sandd Bafang) added another seven minutes to the advantage they gained in the Prologue and will take a 8:30 lead into Stage 2. Team Meerendal’s Barti Bucher and Hans Juerg Gerber are second with Progressive Livestock’s Shaun Portegys and Timothy O’Leary third, just three minutes further behind.

German husband and wife team of Sebastian and Laura Stark (TBR-Werner) added to their lead in the Virgin Active Mixed category and now enjoy a 16-minute advantage over the Spanish pairing of Ramona Gabriel Batalla and Antonio Moreno Ortega (Garmin Ixcor). Miller Paneling’s David Miller and Shayna Powless from the USA are third, five minutes further behind. 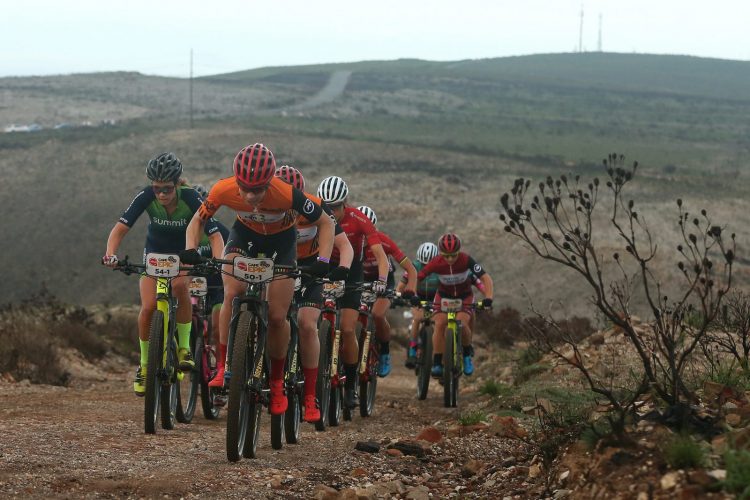 The only jersey to see a change in leader from the Prologue was in the Exxaro race, where Luyanda Thobigunya and Baphelele Mbobo (BMT Fairtree) took over the lead from Lucky Mlangeni and Tshepo Tlou (Exxaro/PWC 1) who have slipped down to third, just behind Exxaro Pepto Sport’s Sean Baloyi and Anele Mtalana.

Tuesday’s Stage 2 is relatively short in kilometres, but with 2 250m of climbing packed into the 90km stage from Hermanus to Oak Valley, the day will still be a tough test likely to be remembered as brutal. 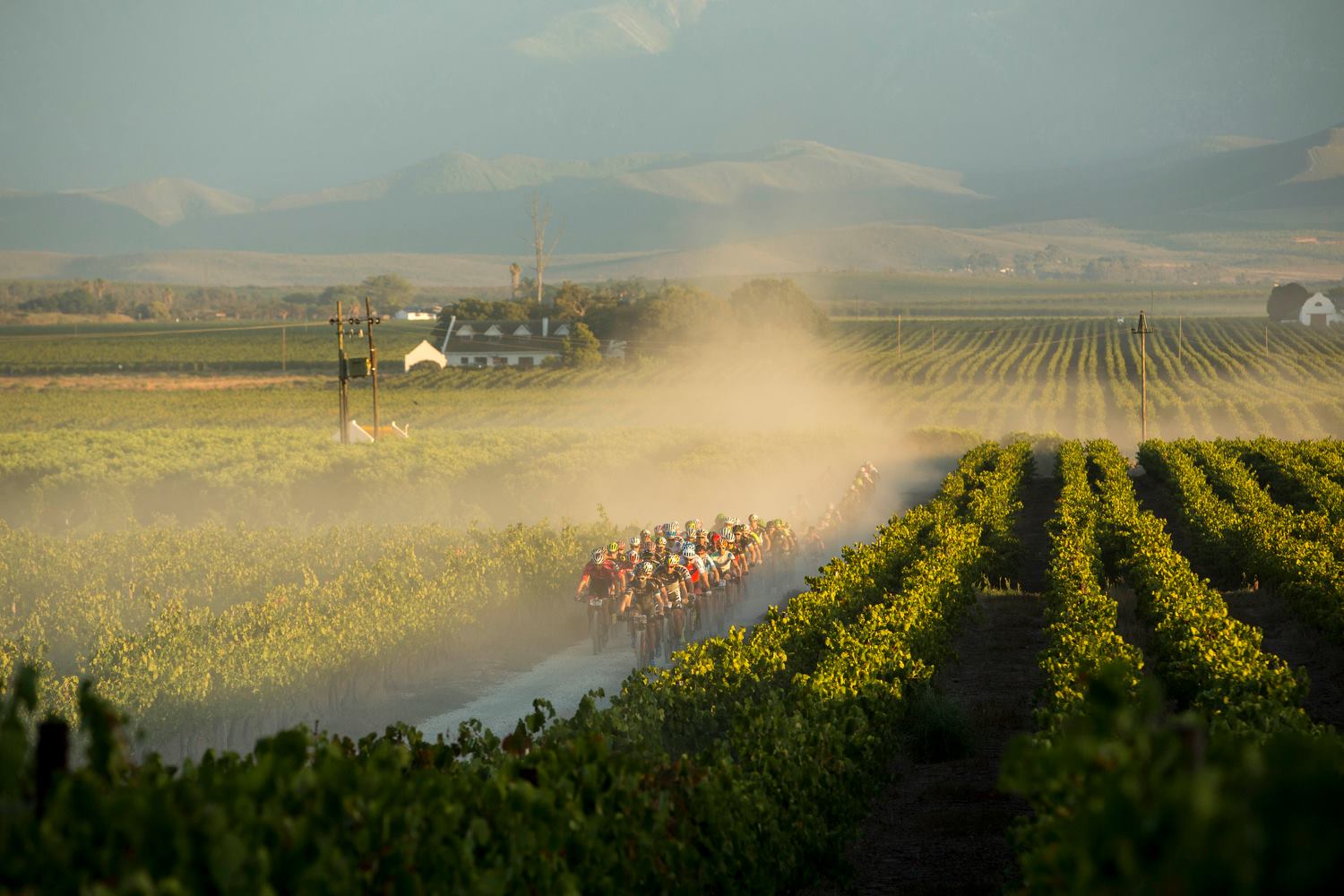 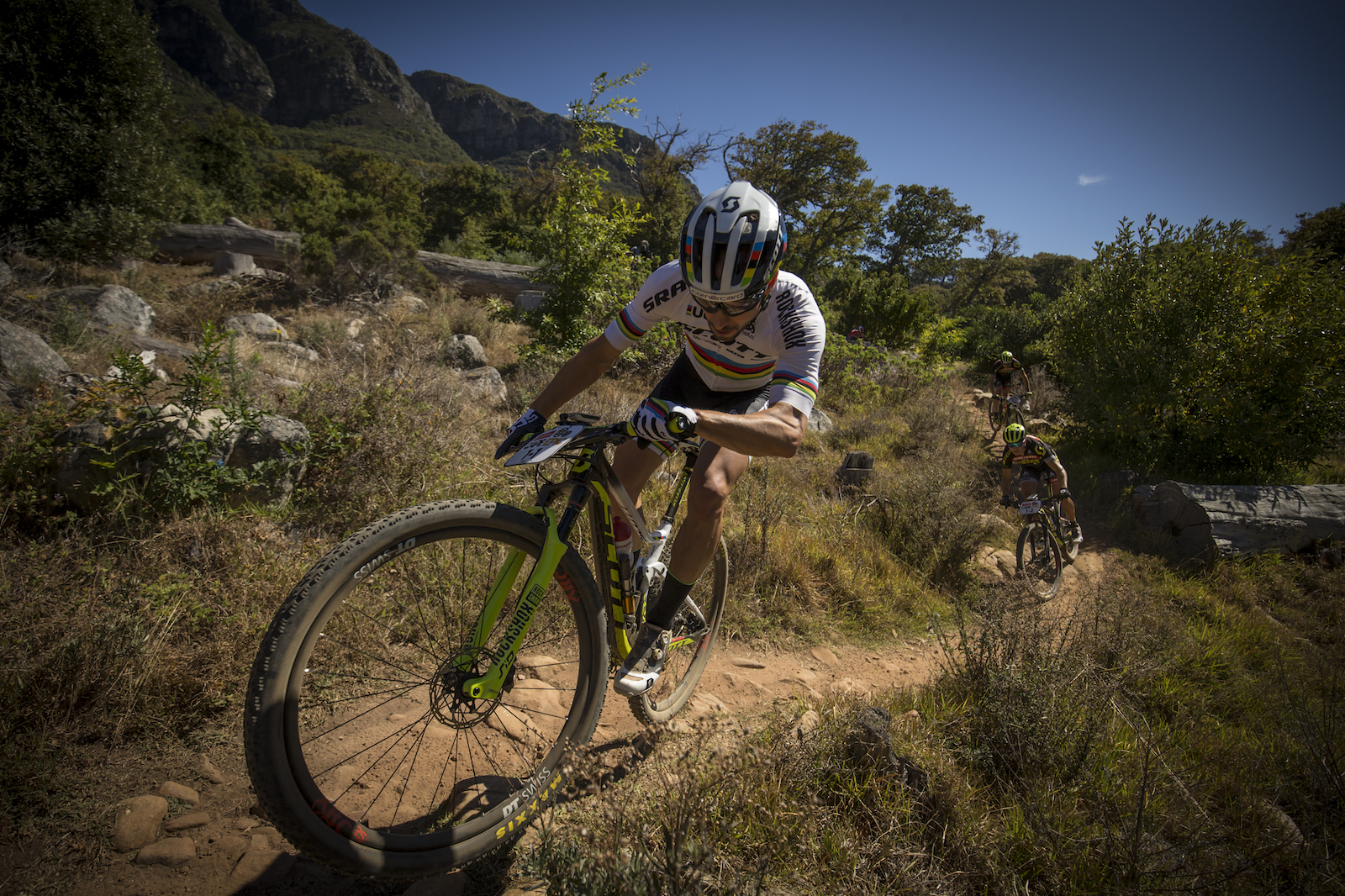 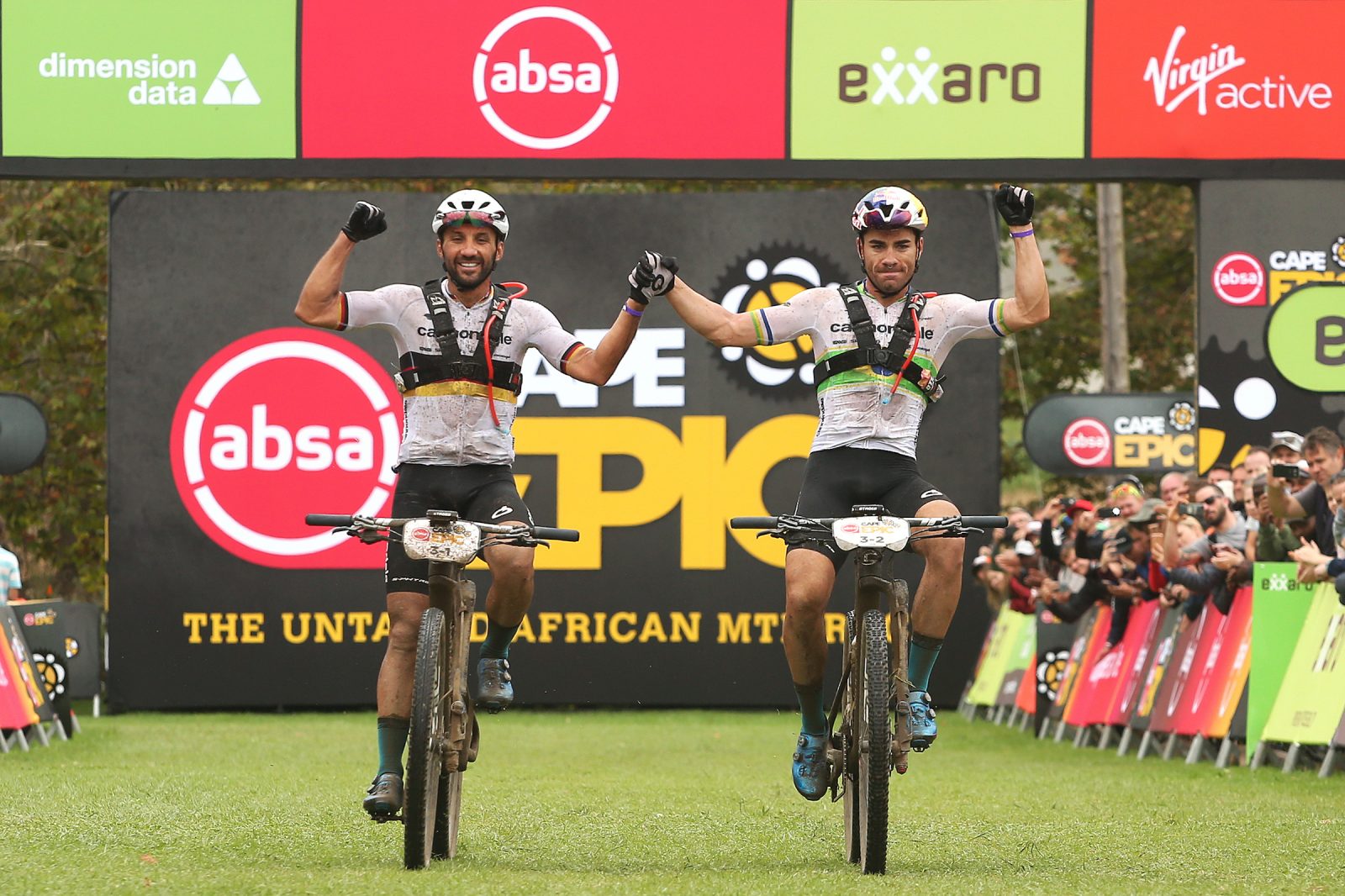