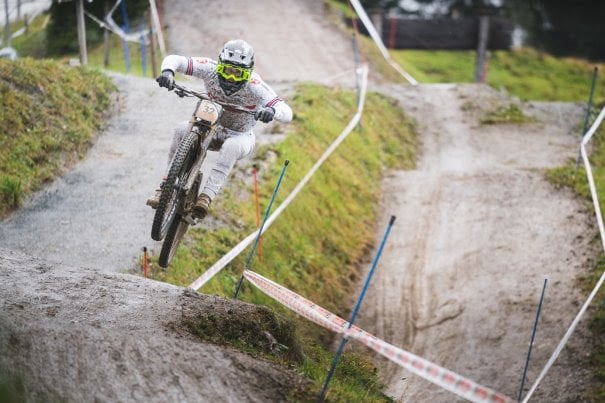 With rain falling overnight, the track conditions were vastly different than during the qualifying round, and the brutal track caught out many medal contenders, including defending champion Loic Bruni (FRA), Greg Minnaar (RSA), Tahnée Seagrave (GBR) and Tracey Hannah (AUS). 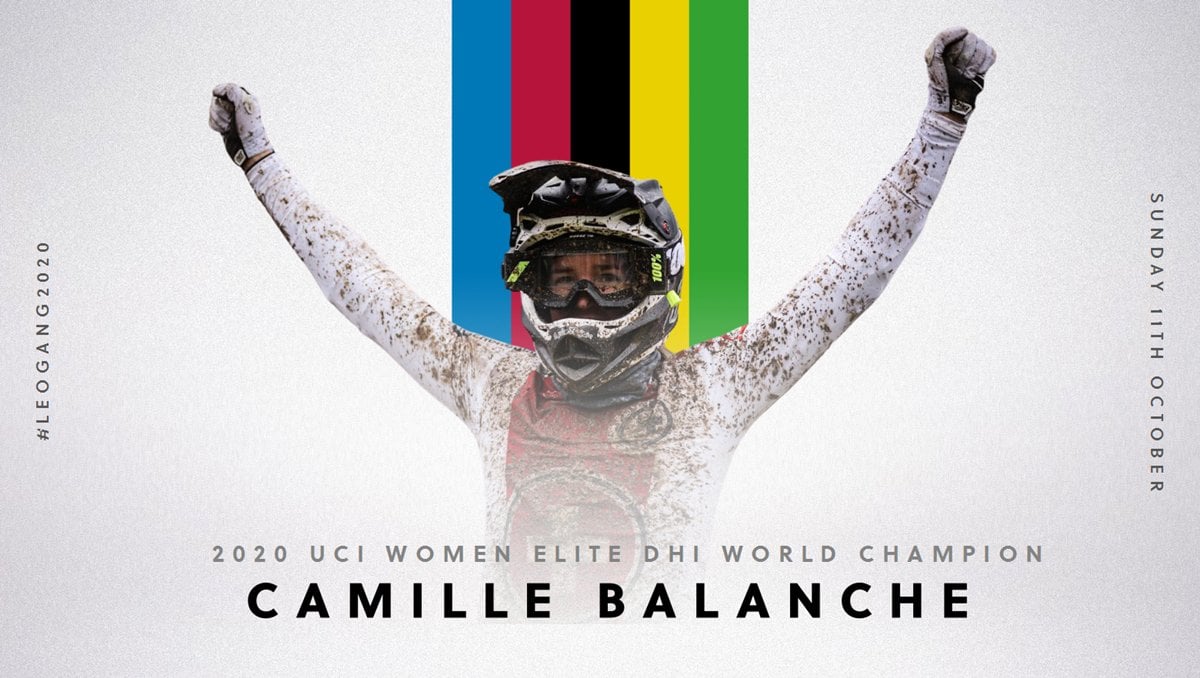 Finding the perfect balance between pushing the limit and being smart in order to stay smooth would prove crucial today. The daunting, muddy conditions in Saalfelden Leogang demanded focus, consistency and flawless line choices, especially in the new wooded section. The Skicircus Enchanting Forest, with its mix of steep, rutty corners turned out to be the deciding factor for the podium. Riders that managed to come through this part of the Speedster smooth would hold a significant advantage over riders that struggled in the mud. 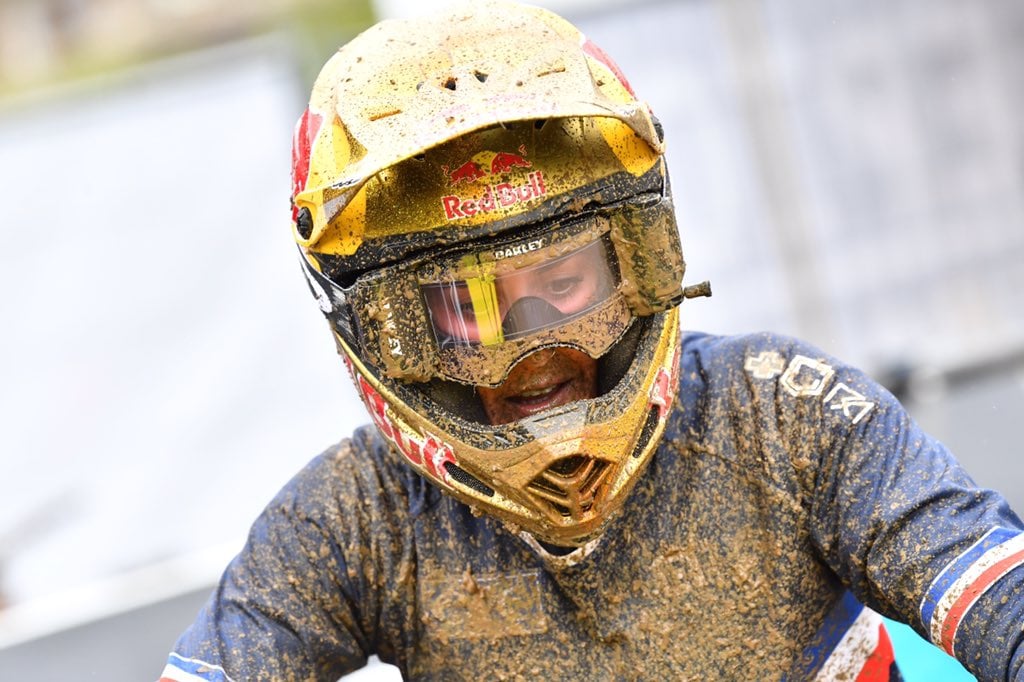 The mud and the ruts in the woods wreaked havoc on almost every single rider with the mud getting so deep that riders would almost lose all momentum in this essential part of the race. Defending champion Myriam Nicole (FRA) would be the first rider to make it through the woods relatively unscathed, with only one crash, seemingly struggling only in the very last part of the woods. Putting in a time of 5:11.556, that time was untouched until Camille Balanche (SUI) came down the mountain with an incredible performance.

Showing extremely fast and smart riding all the way down, she would be the only Women Elite rider of the day to make it through the woods without touching the ground. While being forced to put a foot down in a few spots to get through a rut, the 30-year-old Swiss rider rode the race of her life. With a time of 5:08.426, Balanche proved to be the fastest woman of the day, winning the first ever Downhill Gold medal for Switzerland at World Championships.

Bronze medal winner Monika Hrastnik (SLO) struggled in the woods, but thanks to two strong splits just ahead of the Enchanting Forest she moved into medal contention, with a time of 5:25.392, while Tracey Hannah (AUS) narrowly missed out on the podium with a crash in the middle section of the forest section.

Camille Balanche: “This was the toughest race I’ve ever done; it was extreme. I decided to take a safe line and not rush it, and it paid off. It’s going to take some time for me to realize what just happened.”

Vali Höll, Austria’s hope for a medal in the women’s field and fastest qualifier earlier in the week, crashed in her first training run of the day and wasn’t able to race.

Morning rain made way for afternoon snow and wind, adding a serious degree of complications for the men’s field.

Reece Wilson (GBR) showed just why he should always be considered a podium threat, with a nearly flawless run that would be over seven seconds faster than Jack Moir’s run (AUS), the first rider to finish with a sub 4-minute time. 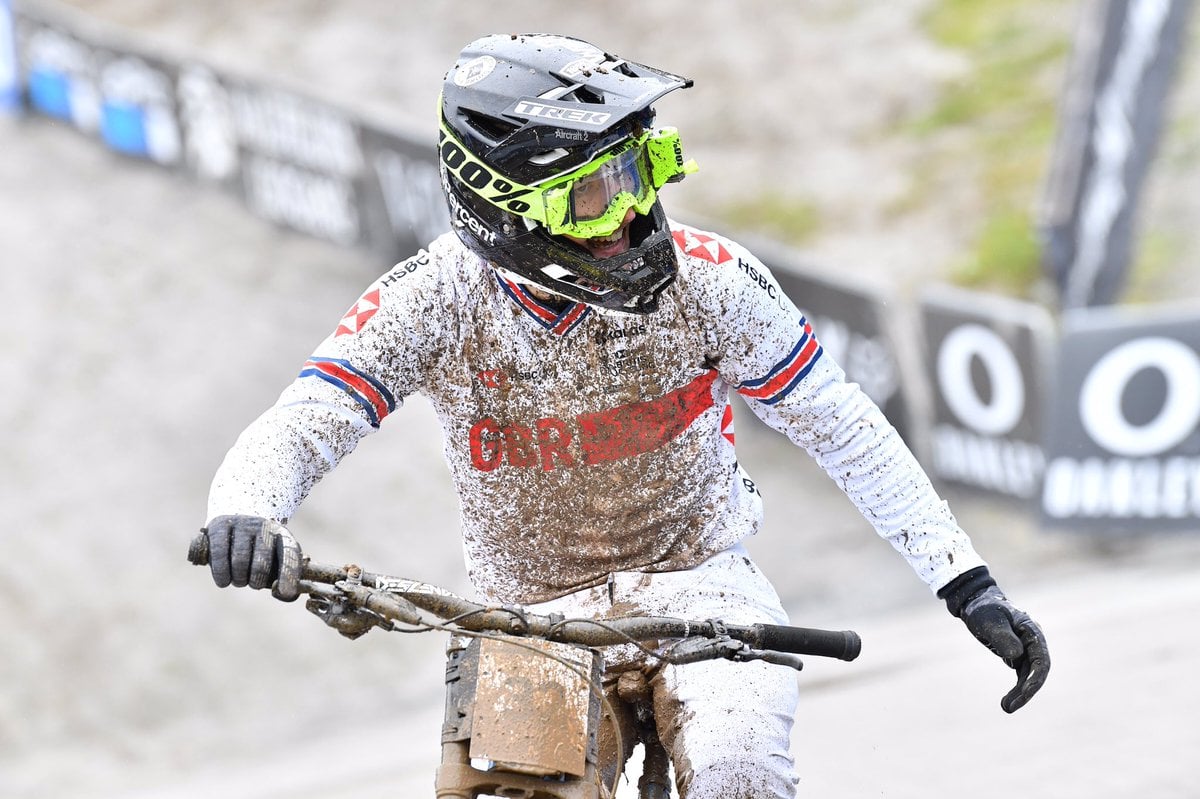 Wilson was surgical down the entire track, pushing the pace, but making the right choices all the way down to the finish line, with a spectacular line through the tree stumps ahead of the motorway section. Bulldozing his way through the mud, the Brit built an advantage of over four seconds in the woods which would see him finish in 3:51.243, adding another gold medal for Great Britain.

The last time we saw a winning performance like this, in similar conditions, was when Danny Hart (GBR) took the World Championship title in Champéry in 2011 with a spectacular run that has echoed amongst Downhill riders around the world since then. It’s time to add Wilson’s run to those same history books.

Three years after breaking his back here in Saalfelden Leogang, Remi Thirion (FRA) would score redemption. Thirion struck hard in the woods, diminishing the gap between him and Wilson significantly, but without becoming a threat to the Scotsman. In a flash of brilliance, his rodeo ride through the woods would land him in third place at the end of the day, scoring another medal for France, with a time eof 3:57.196.

Dropping in after Thirion, Austrian David Trummer would manage to close the six second gap to Wilson by another three seconds with an amazing ride, sneaking into second place with a strong performance when it mattered most. Looking smooth through the woods and putting in a sprint across the finish line, his time of 3:54.440 would reward him with a silver medal.

As the last rider on the mountain, Loic Bruni (FRA) would put everything on the line. Pedaling hard where other riders would pump, Bruni left nothing in the tank, but his risky riding would cost him the race, with several crashes late in his run. 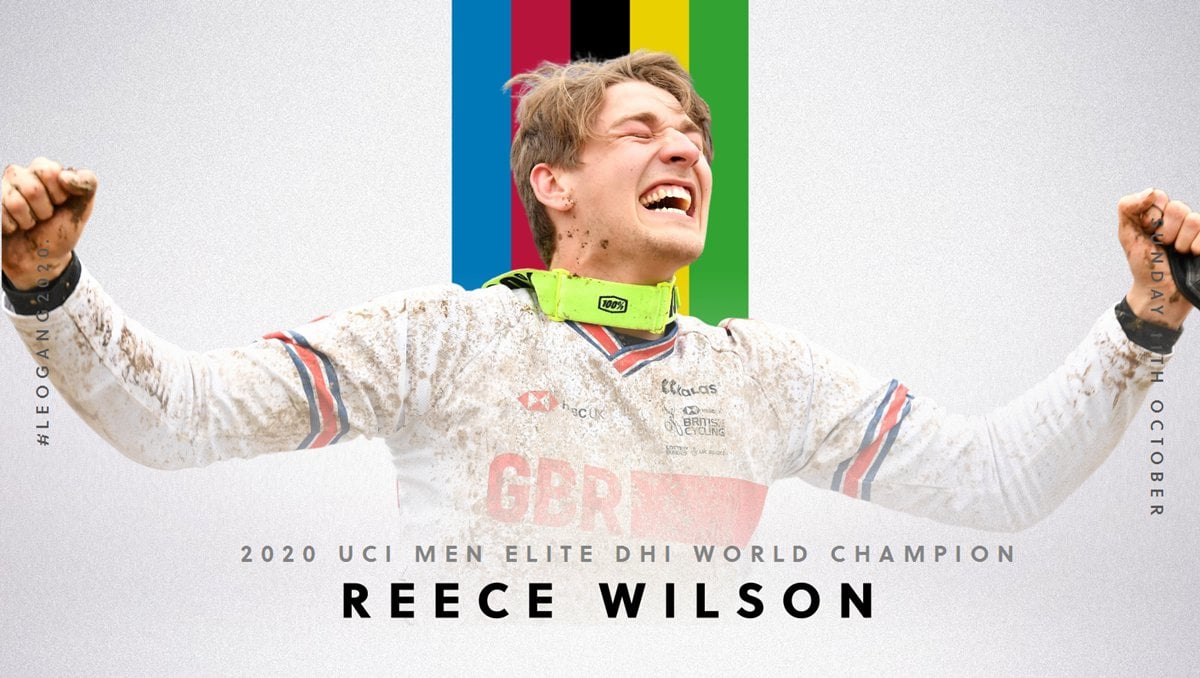 Reece Wilson: “I was ready for it to be wet or dry. I came here and I believed that I could be a guy that could win. Now that I’m down here, I can’t believe it. This weekend shows that the British are really great technical riders. The French have had it (the rainbow jersey) for a good time now, but we’re definitely competitive as a nation.”

David Trummer: “It’s so crazy. I still can’t believe it. This was one of the toughest races I’ve ever done. I was struggling in practice, so I was fighting hard all week. I thought about the whole run in my head before the start. I knew that if I got to the wood section with a good run until there, I knew I had to slow down a bit, stay on my bike and not crash at all and it paid off”.

As one of the last riders down the mountain, Lauryne Chappaz (FRA) was able to keep a clear head despite the tricky track conditions. In the green all the way down, the 18-year old French rider was able to finish in 5:41.502, over 46 seconds faster than Austrian Sophie Gutöhrle, who put in the time to beat mid-way through the race, with an impressive 6:28.311, enough to earn her a silver medal. Closing out the Top 3, and adding another medal for France is Leona Pierrini, with a finish time of 6:35.314.

On the men’s side, the standings were shaken up by a strong performance courtesy of Óisin O’Callaghan (IRL), whose time of 4:02.142 prevented a Top 3 loaded with British riders. His time would be good enough to hold off a strongly advancing British field, which included Daniel Slack (2nd, 4:04.283), James Elliott (3rd, 4:12.847) as well as Dennis Luffman and Luke Mumford, who finished in 4th and 5th place.

As the 2020 UCI Mountain Bike World Championships come to a close, the final medal standings look as follows:

Full results can be found here.