After the comparative test between the Specialized Enduro and the Trek Slash, then the Slash individual test, here we come full circle with the Specialized Enduro FSR Pro Carbon individual test. Like the Trek, the Pro Carbon is the second highest Enduro model in the lineup, after the S-Works which we’re riding with 27.5″ wheels for a long term test. 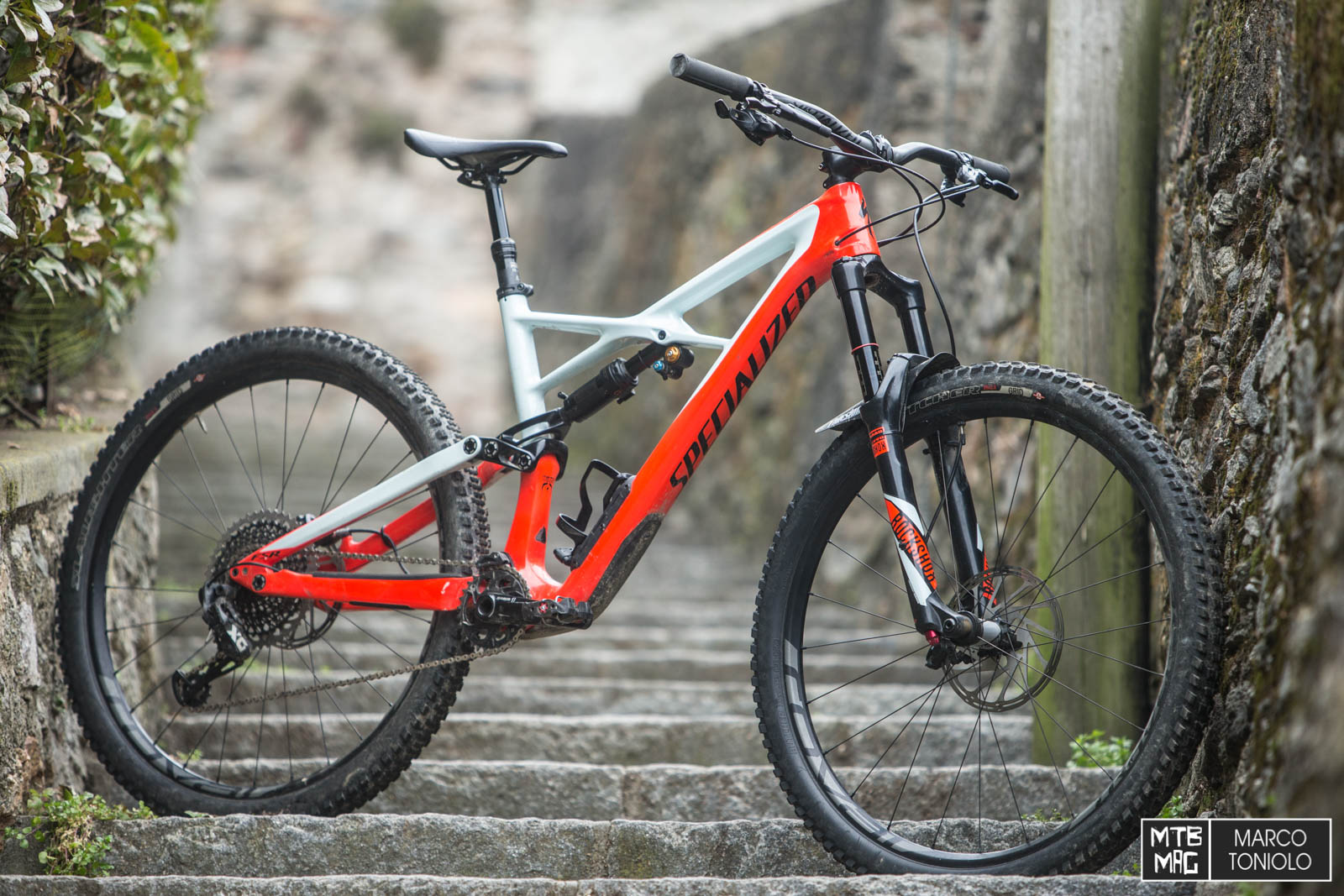 Since the launch of the first model 5 years ago, the Enduro has evolved toward more slack geometry following the current trend. Unlike other brands, Specialized has chosen not to subvert the character that the Enduro has always been commended for: its all-around qualities. Just a few years ago it was impossible to think of a 29er with 165mm of rear travel. Considering the 66° head angle and the short 432mm length chainstays, we’re clearly not dealing with a downhill pig. On the contrary, thanks to a steep 76° seat angle, the pedaling position is efficient and less tiring than other enduro bikes on the market. The bottom bracket has been kept pretty high to avoid hitting the pedals on the ground as frequently (352mm).

One thing that should be taken into consideration if you want to buy an Enduro, is that sizes have changed a lot and are now even smaller. Here you can make a comparison with the previous model. In fact the tested bike is an L size and it perfectly suits our 5’9″ rider. Typically a size L bike should fit a 6′ tall rider. 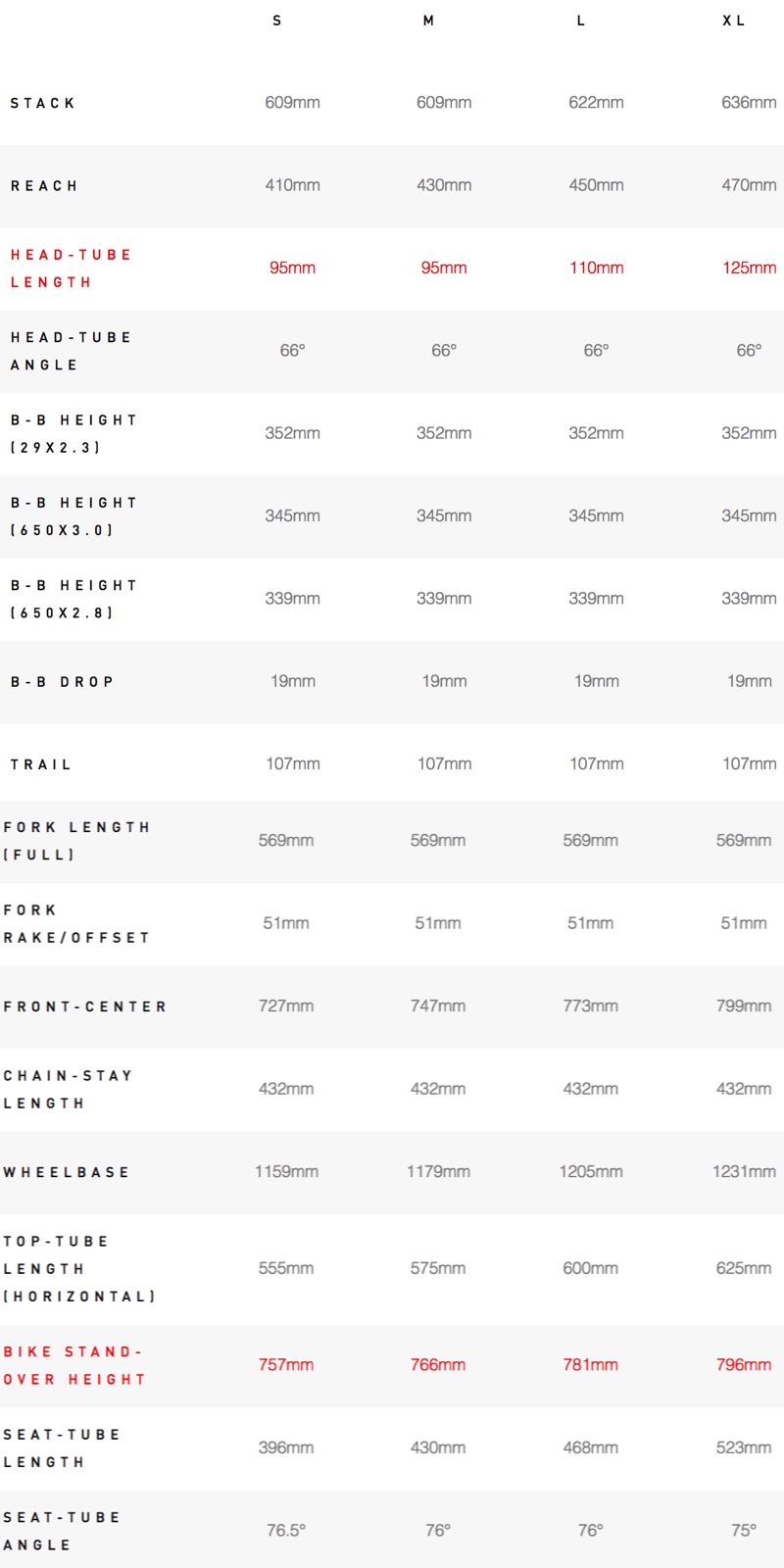 On first glance, the Enduro looks identical to the previous model. Specialized decided to work out some details to perfect an already successful project. The first improvement is the introduction of the Boost standard on both the fork and the rear triangle. This standard suits the 29er since it allows for building stiffer wheels thanks to a wider bracing angle. 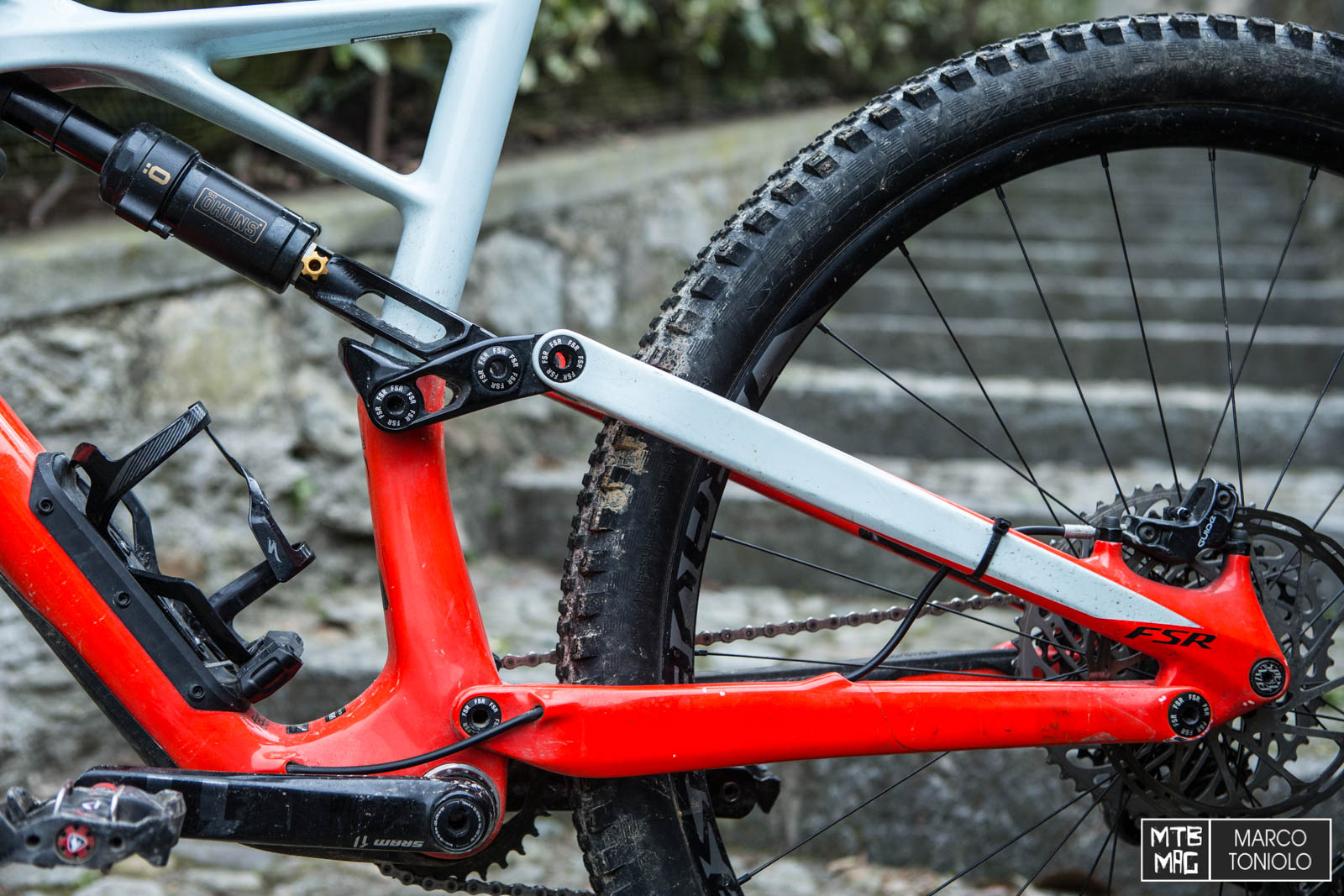 As previously mentioned, the rear travel is now 1cm longer. For this reason,the  engineers had the delicate job of shortening the chainstays as much as possible, minimizing the gap between the rear triangle and the seat tube, which is now very narrow. Instead of the unhandy pressfit one, on the new model we have a massive threaded cup bottom bracket which suits the enduro segment better with its ease of maintenance. Also the cable routing has been improved, avoiding going under the bottom bracket. 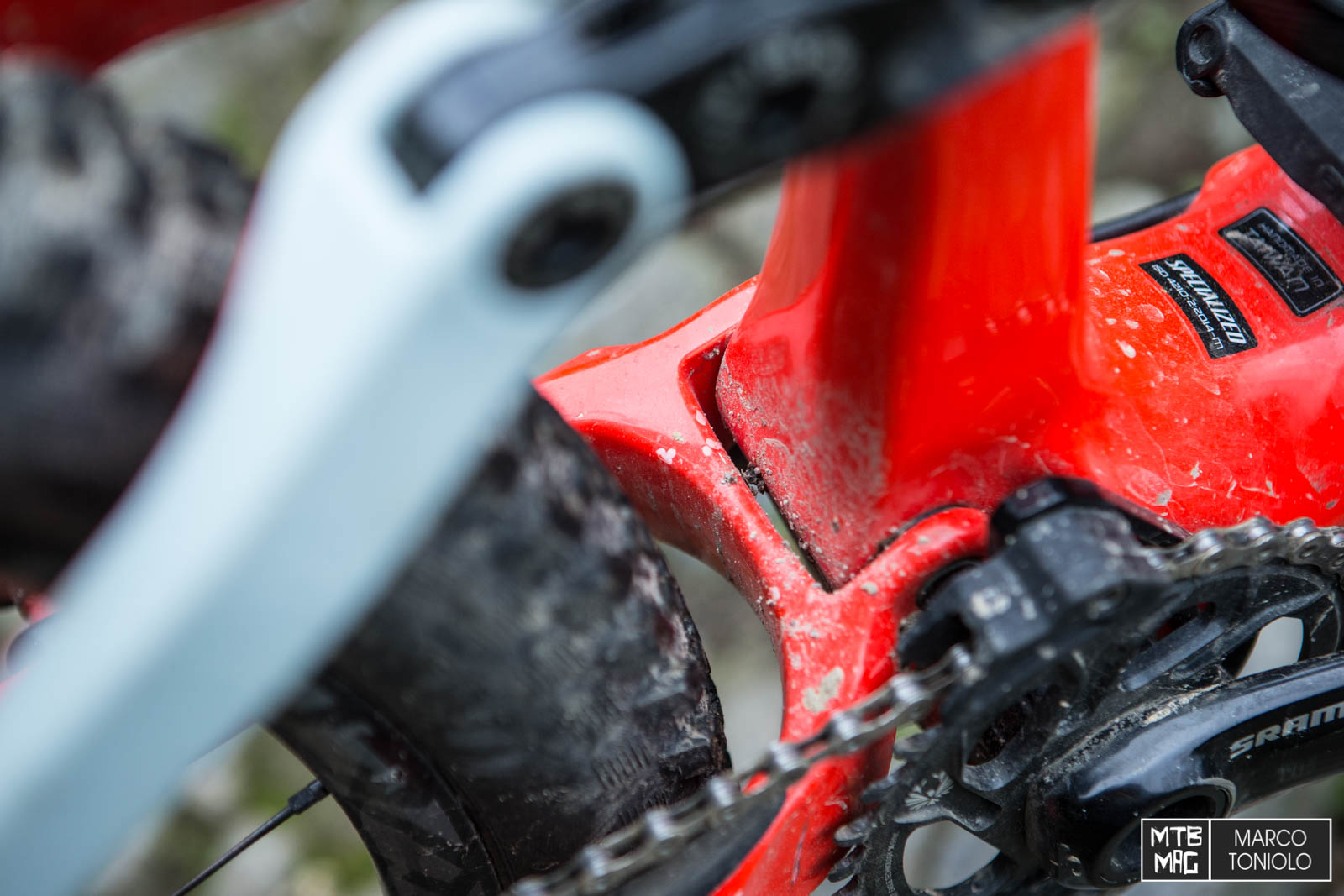 Specs are carefully chosen, above all the RockShox Lyrik RC Solo Air fork. In comparison to the Pike of the previous Enduro model, the Lyrik is one step ahead in terms of stiffness and heavy impact absorption, so it suits the segment perfectly. The rear shock is the new Öhlins STX22 Air shock with All Mountain and Autosag tuning (only for Specialized). It is provided with rebound adjustment (short, only 6 clicks), high speed 3-level compression tuning (one level is specific for climbing) and low speed 8-click compression tuning. 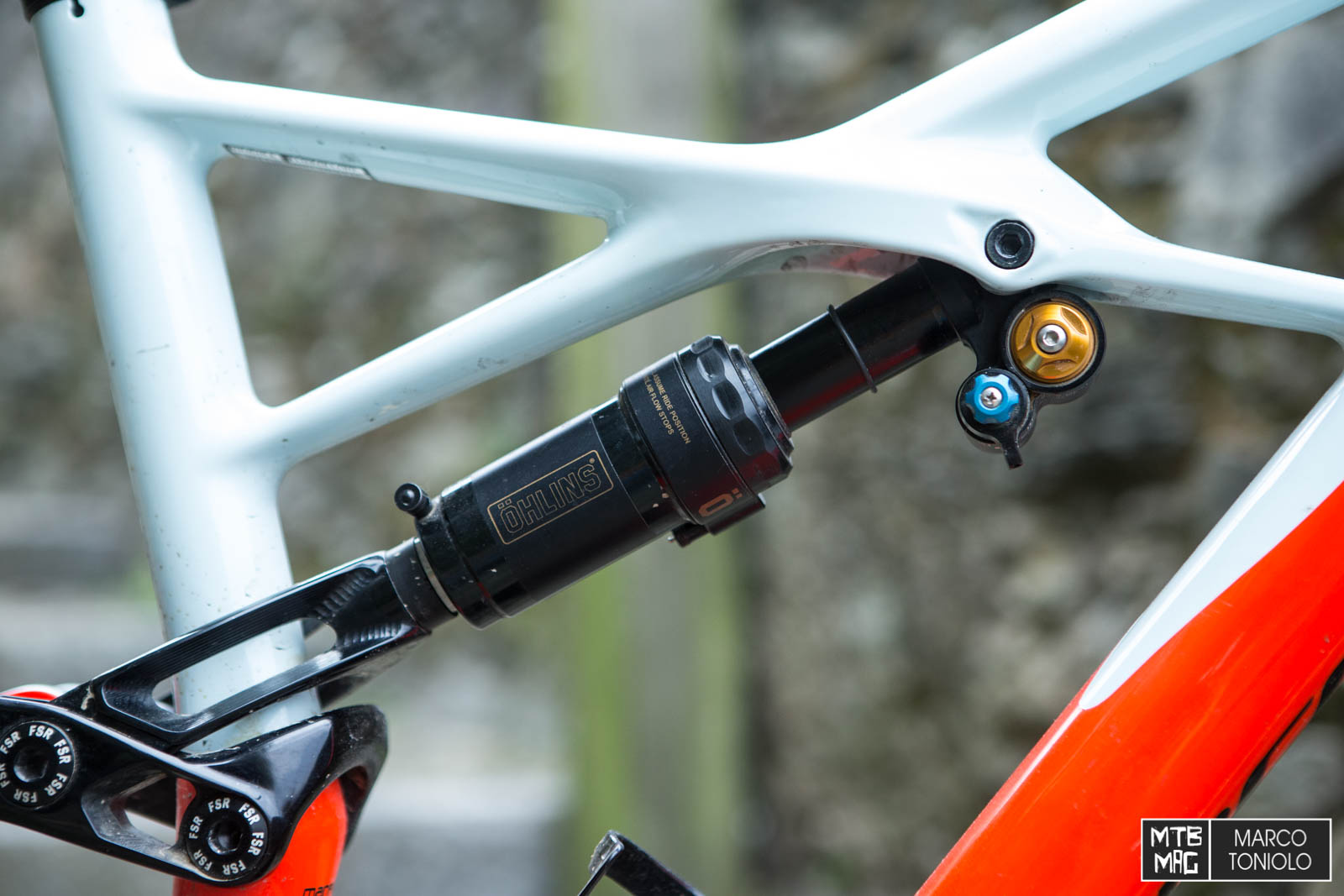 The drivetrain is the 12-speed SRAM Eagle with 30t front chainring and a custom aluminum crankset. Brakes are also from SRAM, the Guide RS with a 200mm rotor at the front and a 180mm at the rear. 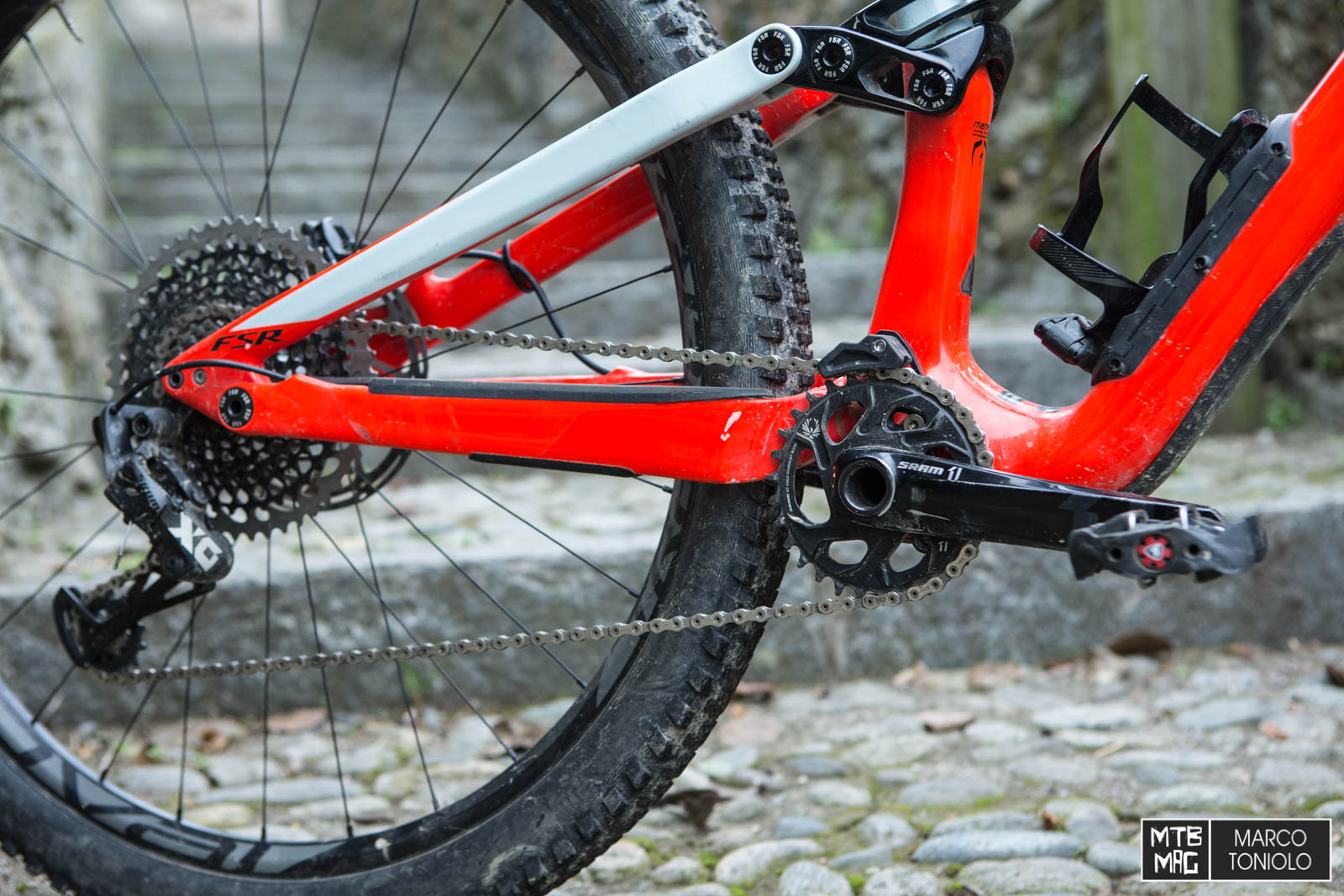 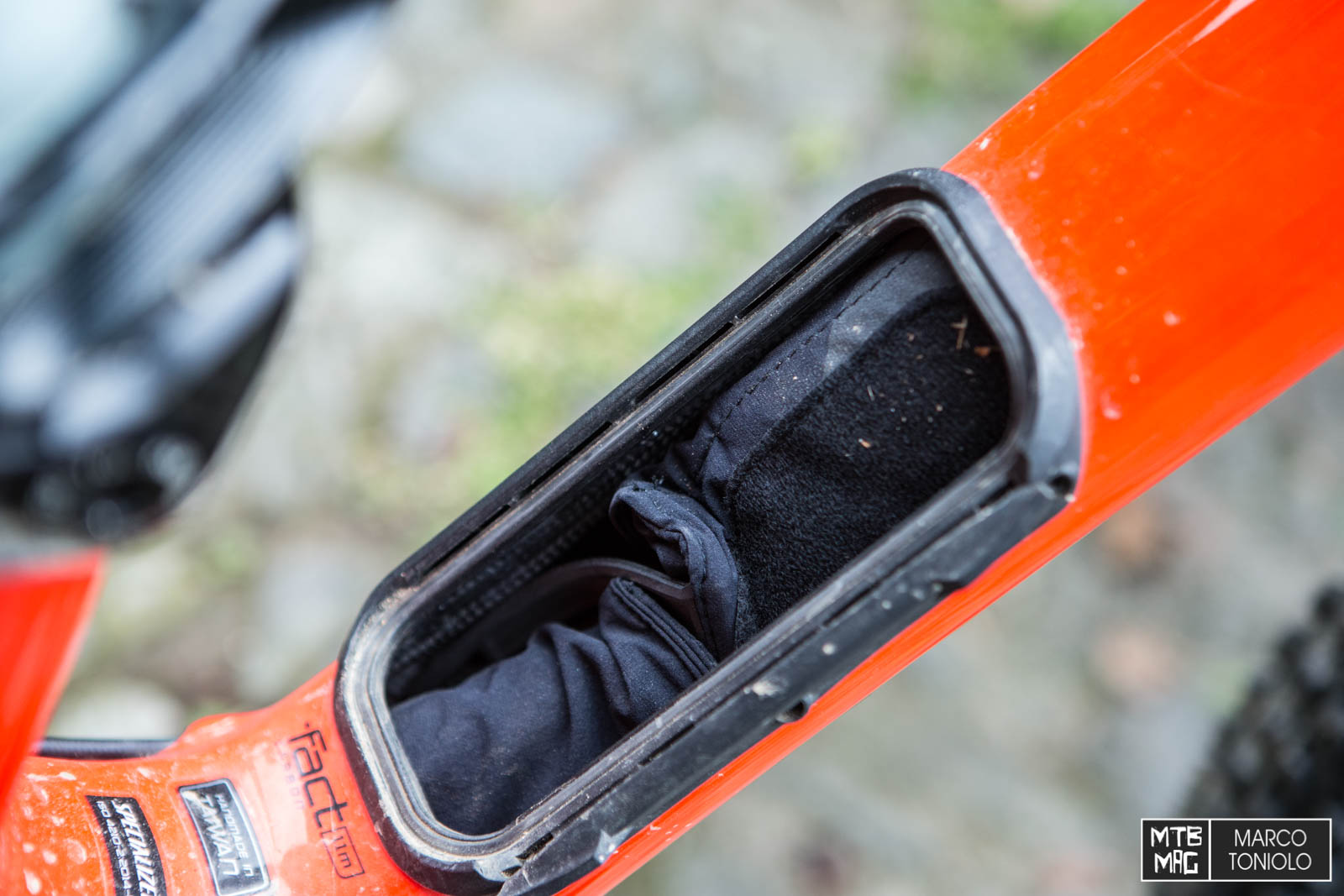 The measured weight of the bike with all the specs but without pedals installed is of 13,930 grams including the bottle cage multitool, part of the SWAT project, for the first time on an Enduro model. All Enduro carbon frames are equipped with this compartment, reachable by removing the bottle cage, where a pump, tube, energy bars, jacket, burritos, soft flasks etc. can be squeezed into.

You’re probably tired of hearing that modern enduro bikes are not made for climbing. It is good news that the Enduro 29 doesn’t climb as bad as you would expect. We already mentioned the all-round qualities of the old Enduro 29: though you can’t say Specialized aimed at developing an all-round bike (they already have the Stumpjumper FSR), on technical climbs the new Enduro rides nicely, thanks to the comfortable, central seat position. The upper body naturally leans forwards, helping to keep the front wheel on the ground even on steep sections. 29″ wheels do the rest, providing good traction even on the most difficult parts.

On smooth/paved uphills, the lack of a complete lock out on the Öhlins shock makes itself known. The Swedish brand suggests putting the high speed compression lever on position 3, but the difference with position 2 isn’t all that noticeable. On long climbs this becomes an issue, especially when the Lyrik is in firm position, for example on asphalt sections: the front is still while the rear keeps wasting a bit of energy. The 2.3″ Slaughter rear tire has really low rolling resistance but the traction in wet conditions is not the best.

About the drivetrain, we can say the 30t chainring is too small: with the 30-50 you end up spinning too fast and we suggest replacing the chainring with at least a 32t or, if you’re fit enough, with a 34t one. 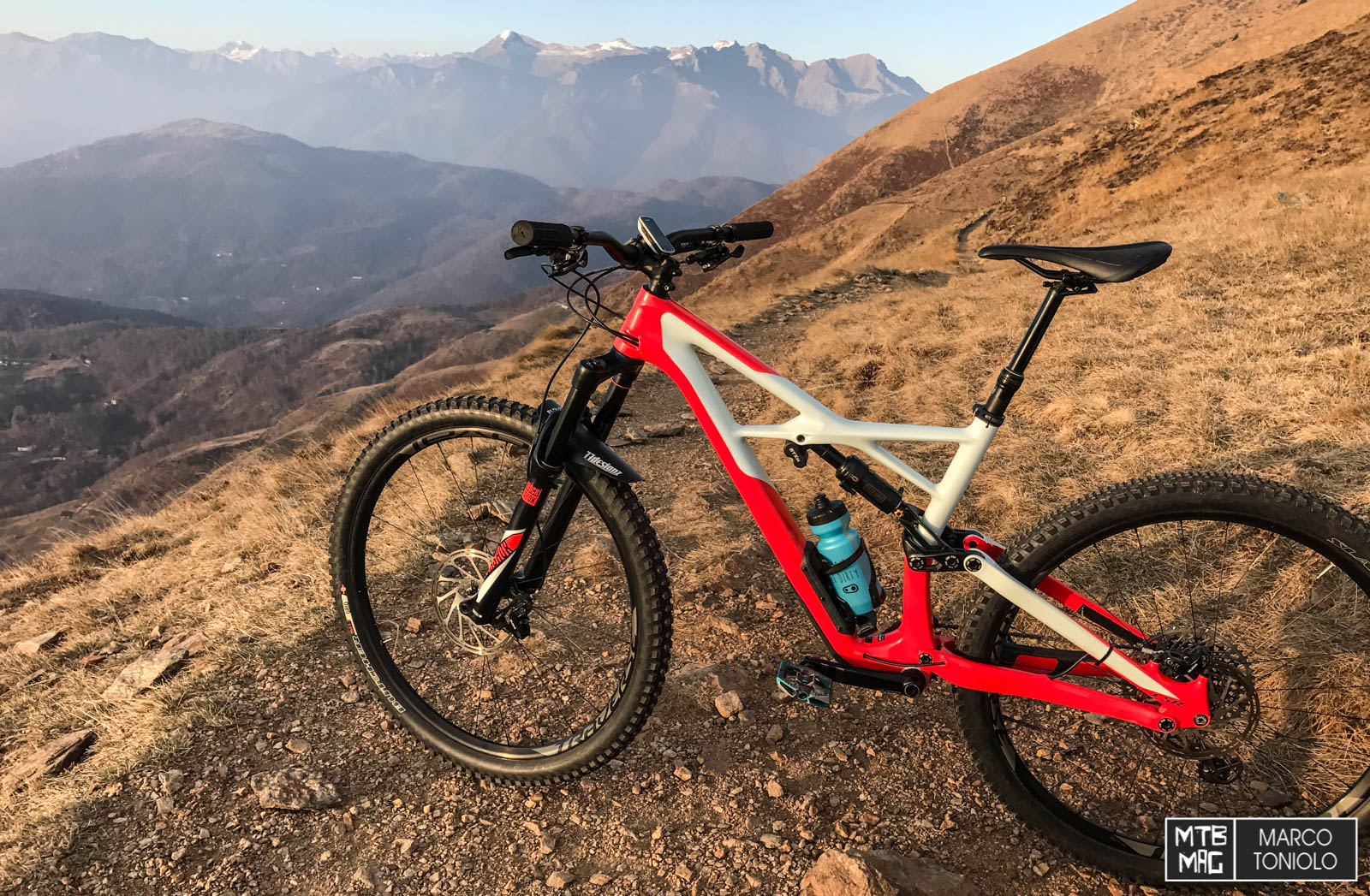 The first time we tried the new Enduro on our home downhill track with 900m of descending, we were enthusiastic straight away. You get used to it instantly and don’t have to pay too much attention to weight distribution, especially up at the front, so as not to miss corners. The central seat position and lack of extreme angles make the rider feel comfortable from the first ride.

The long travel, the 29” wheels and the geometry give the rider a lot of room to play with the limits. It is easier to deal with sections that would feel dodgy on other bikes (especially the 27.5” ones). The Lyrik is one of the most interesting components. As we already said, a comparison with the Pike is merciless. The hydraulics are the same as the Pike, but the massive structure (especially compared to the old 100mm standard) and the new 110mm (Boost) hub with the stiffer wheel contribute to enhance the front end rigidity and solidity. This translates into excellent handling precision and a solid capacity for big hit absorption.

Some days ago we disassembled the fork to install a component to be tested, so we also measured its weight: 2,050 grams. It is only slightly heavier than the Pike (approximately 100 grams) but it performs way better in demanding terrain, improving the overall behavior of the bike.

Due to the high bottom bracket, hitting fast corners is not as much fun as with other bikes which have lower center of mass (but which are more tiring on technical climbs). Despite being a 29er, the Enduro is nimble, easy to turn, and fun to ride on technical rough terrain, because it makes the rider feel confident. 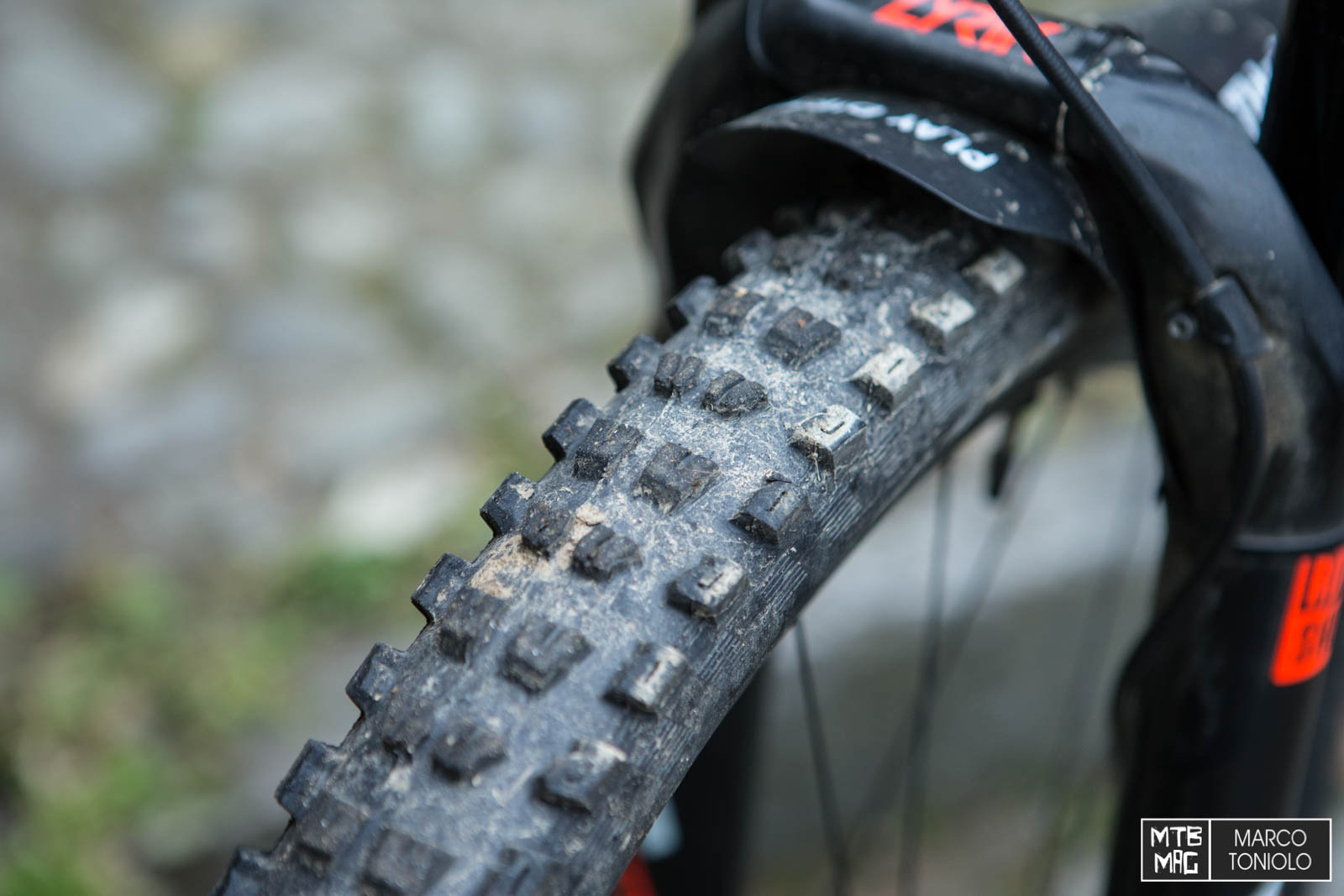 The wheels / tires match is very good: the aim was to find the right balance between traction and rolling resistance. Do not expect any miracles from the Butcher 2.3, especially on wet surfaces, since at the back the thread is nearly a semi-slick. If your aim is to kill it on downhills, tires are the first thing to change since you need more grip (but they’ll be heavier). Regarding weight, the tubeless ready wheelset weights 1,890 grams, a sign that Roval was more interested in solidity than light weight. Actually, during the second day of testing, a spoke broke on the rear wheel, but this wasn’t an issue at all and the Traverse worked efficiently during the next two-days of comparative testing on the trails of Finale Ligure. 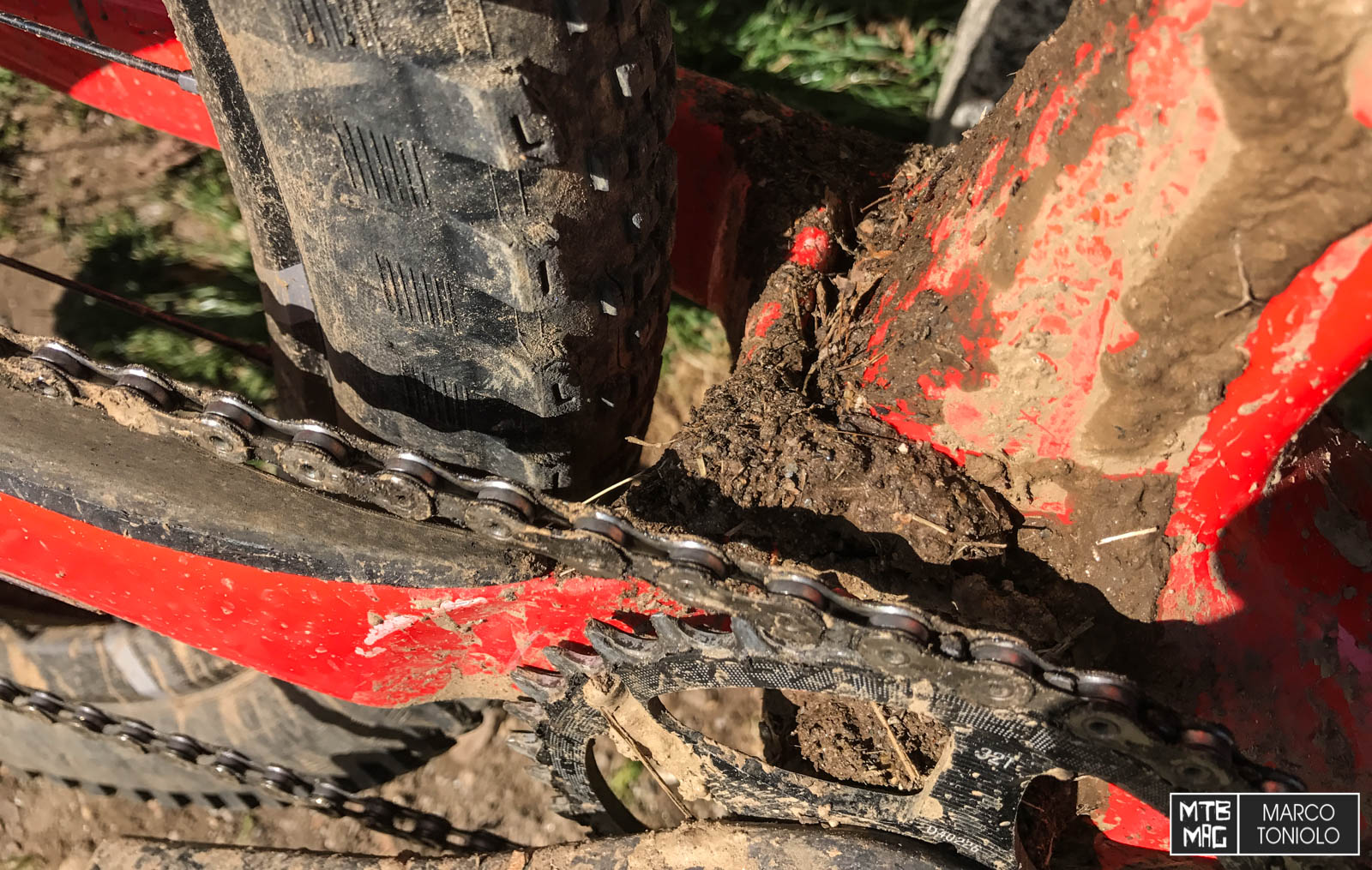 The rear triangle is as short as possible. The other side of that coin is clearly shown in the picture above: mud, stones and gravel accumulate between the rear and the front triangle scratching the paint, just like the Pivot Firebird we tested two weeks ago. Since the trend towards a shorter rear triangle is clear, it’s time for the companies to find a way not to ruin the frame after only a couple of rides, possibly by means of a reinforced protective film. That seems to work well for protecting seat/chain stays from heel scuffs.

Comparison between new and old Enduro 29

Two years ago we extensively tested the previous model of the Enduro, here are some of the conclusions:

Thanks to the balanced geometry, the light weight and the central seat position, this bike rides well in most terrains, even on climbs, where usually enduro models have a hard time.

The new model is 800 grams heavier despite the carbon rear triangle. Apart from that, the conclusion is pretty much the same. The downhill performance has been improved at the detriment of the climbing: the new bike is better and more fun to ride downhill than the previous model. The evolution of the Enduro (the bike) follows that of the enduro (racing). In the same way, the first model was launched at Finale Ligure, when the EWS didn’t exist and pedaling was still considered a very important thing. In contrast, the new model was presented at Whistler, where shuttles play an important role.

Components have become more solid: Lyrik, Boost hubs, a shock with a piggy back, wider handlebar. Let’s forget the old all mountain weapon, now we have an enduro bike which gives its best downhill characteristics. Specialized’s all mountain bike is the Stumpjumper.

Specialized Enduro 29 has grown up: the project has developed further, the travel is longer and the downhill performance has improved. It is not the all-round all mountain bike anymore that we knew from the past, but a real enduro which, unlike most of the competitors, is still fun to ride even uphill, thanks to its non-extreme geometry. It climbs well, considering the type of bike, mainly thanks to the central seat position. Be careful when choosing the size, they run really small!