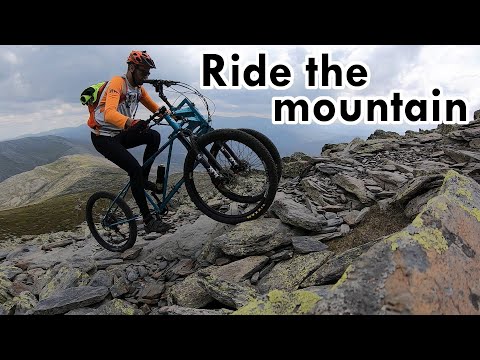 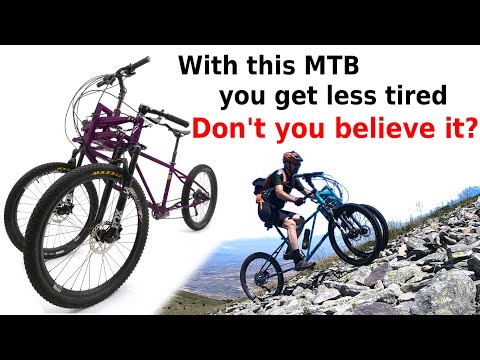 In theory, making shorter and shorter gears for the bike would allow us to keep pedalling steeper and steeper inclinations without getting exhausted. However, in the steepest climbs we need to forward the weight to avoid the front wheel rising off, but we may loose grip in the rear wheel. Also, by reducing the speed keeping the balance is compromised… At this point you know what we are talking about… we end up stopping riding and starting hiking. However, there is a solution for this.

ASCENDU, a Spanish enterprise, has found the solution without giving up on the capacity of the bike to make conventional MTB routes. It has created a tilting trike that does not tip over when ridden off road since the front wheels can go up and down independently with a travel of 430mm. This allows the bike to pass through lateral inclinations of 120%. Even more, the travel of the front wheels allows the bike to be ridden in any singletrack, no matter how narrow it is. Besides, the bike has a second handlebar split in two parts that are attached to each fork. 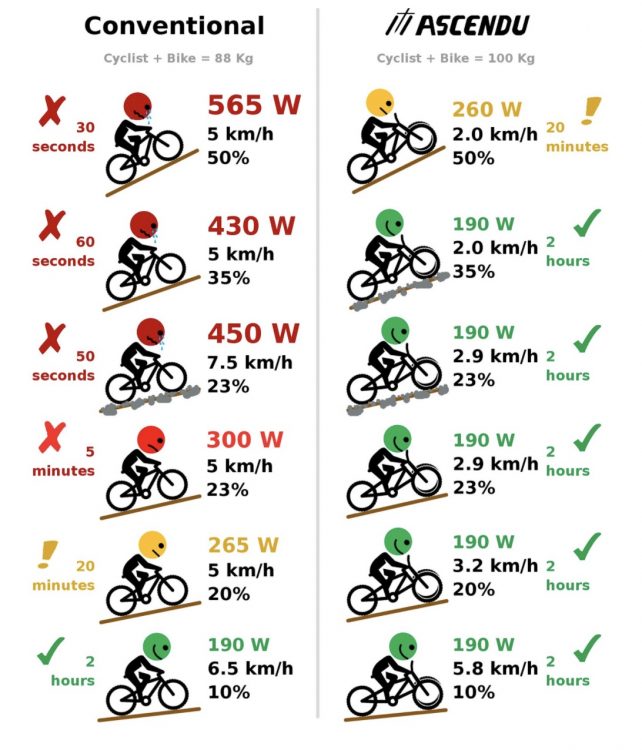 By pushing and pulling this two piece handlebar the rider can keep the balance when ridding in technical climbs independently of the speed or the rear grip. Therefore, keeping the balance is now independent of the speed: the rider can always follow the best line regardless the speed or the traction of the terrain in situations such as climbing a rock garden. Furthermore, the bike has a planetary gearbox in the bottom bracket that transforms the chainring into a virtual 13 teeth chainring. ASCENDU makes possible to modulate the climbing speed to match it to your fitness in a 20%, 30% or 50% climb while at the same time the loss of balance or grip is not an impediment to carry on riding up.

An initial bias when getting to know for the first time this type of bike is to evaluate how it will perform in the common routes, but likewise we do not value a downhill bike in a xc route or a xc bike in a road route, we should value this bike in the type of route suitable for it. Then, what are the ideal routes for this bike? They are those routes that, although many of us would love to do, we do not do to avoid hiking the bike all the way up. Mountain biking calls for riding in the mountains. Also, many of us remember epic routes where we reach the summit of the mountain that rises on the horizon, but we had to hike a lot… and that prevented us from repeating the route though it really was a memorable one. 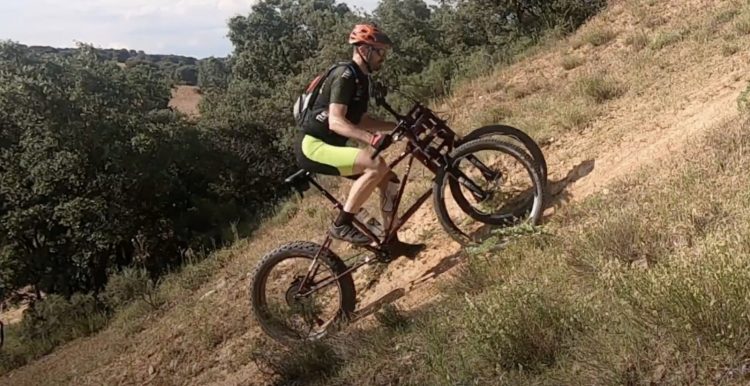 This is the type of route where an ASCENDU bike makes sense. Most singletracks in mountains are footpaths with an inclination of around 35%, since this is the inclination that is comfortable to walk. These singletracks are not rideable in practice and most mountain bike routes avoid them for climbing. However, in the mountains, many times this is the only available option as there is no alternative route. ASCENDU is the only bike that makes these routes rideable.

The balance system of the ASCENDU bike and its drive system with ultrashort gears (13/46) allows the rider to modulate the effort and to climb with the speed that matches his/her fitness. In a mountaineering style the rider climbs at a suitable pace knowing that the goal is to reach the summit, riding the bike, under his/her own physical power and enjoying the views from such a unique place. The downhill comes next. This is done quick though not as quick as with an enduro bike. It is also done with safety because the bike is very long and stable, and because the tilting transverse beam provides the front wheels with 430 mm of travel. 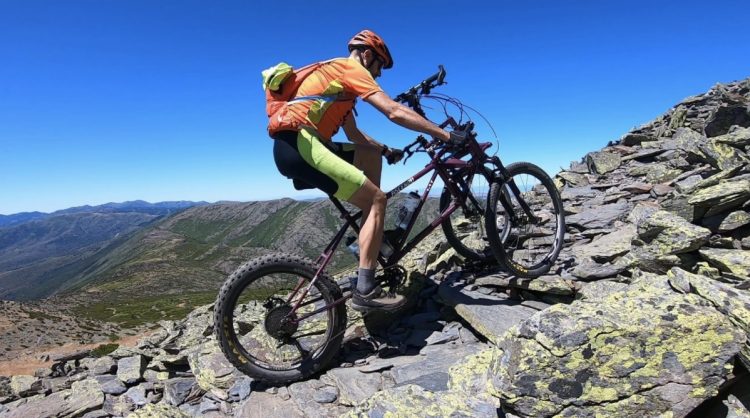 The chainstays go from 620 to 680 mm depending on the size. This length of the chainstays provides stability in inclinations of 50%, avoiding the front wheels to rise off. While in inclinations from 50% to 75% the rider must forward his/her on weight to avoid this, being 75% the maximum inclination. The gear with a virtual chainring of 13 teeth and a rear sprocket of 46 facilitates to pedal in these inclinations. Even more, these short gears allow the rider to carefully modulate the torque on the rear wheel in the extreme climbs to get all the traction that the grip of the terrain provides creating a human traction control. However, should the rear wheel loose traction, it does not imply the loss of balance, and the rider just carries on.

Undoubtedly the weight of a tilting trike is greater than that of a conventional bike. The weight is around 24 Kg or 25 Kg depending on the choice of forks and wheels. However, this is just an increment of the system weight formed by rider and bike of 15% approximately. This is not a dramatic change and it does not modify greatly the amount of energy from the rider required to climb. In the real world it means that a 1 hour and 30 minutes route with a convention bike is made in 1 hour 39 minutes with an ASCENDU. In relation to the climbs, it is possible to calculate the speed when climbing a 10% inclination by a rider pedalling at 190 W. 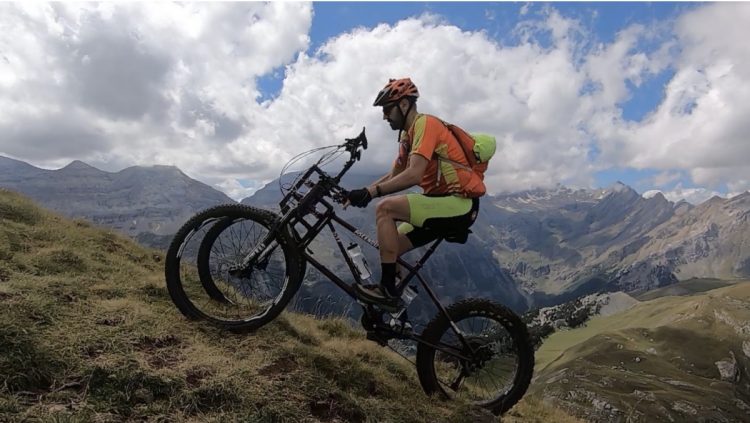 The speed using the conventional bike would be 4.0 mph (6.5 km/h) and with ASCENDU it would be 3.6 mph (5.8 km/h). However, when the climb is 35% the conventional bike needs 430 W to keep the speed and traction and this exhausts the rider in a matter of second or minutes while with ASCENDU the rider can climb easily the 35% inclination with just 190 W at 2 km/h without any extra effort. With the ASCENDU bike is easy to ride big climbs with average inclination of 35%. This is the situation where ASCENDU really excels in relation to any other bike. This bike really stands out when the inclinations are greater than 20%.

ASCENDU bikes are manufactured in Spain. The design of the tilting trike is patent pending in many countries of Europe and America. It is an innovation that has no antecedent in the cycling world, since it is the first bicycle in history that allows the rider to climb easily inclinations of 40% on shale or 50% on dirt and stones. This opens up a new dimension in mountain biking that was not expected. The ASCENDU guys have tested the bikes in many mountains including a famous mountain in Spain, Moncayo, with a climb of 43% inclination in a scree where no mountain bike, e-bike or trials bike can climb regardless of how good and fit the rider is. This is shown briefly in the ASCENDU Youtube video titled “Introducing ASCENDU 3×3” and it is shown in detail in the videos from ASCENDU in the Moncayo mountain range.$ 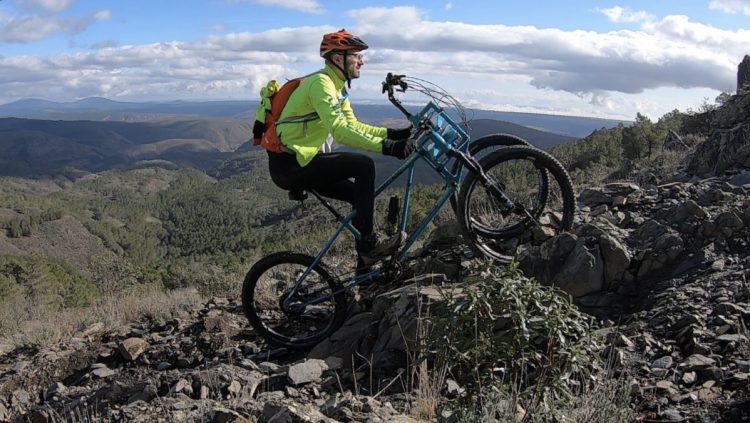 The features of these tilting trikes make possible a new type of mountain biking. Routes that were not rideable before are rideable now. It creates a new style of cycling where the most important is to reach the summit riding. A new mountain biking discipline may be around the corner. We had cross country, downhill, enduro, back-packing, trail, fatbikes, xc marathon, all-mountain (hiking), dirt jumps, trials, free ride and gravel. Climbing was lacking.