During the recent Enduro World Series event in Finale Ligure, we had the exclusive chance to try the new Diamond fork from DVO. The version we got to try was the definitive model with finalised internals that will be shortly available to the public from December. 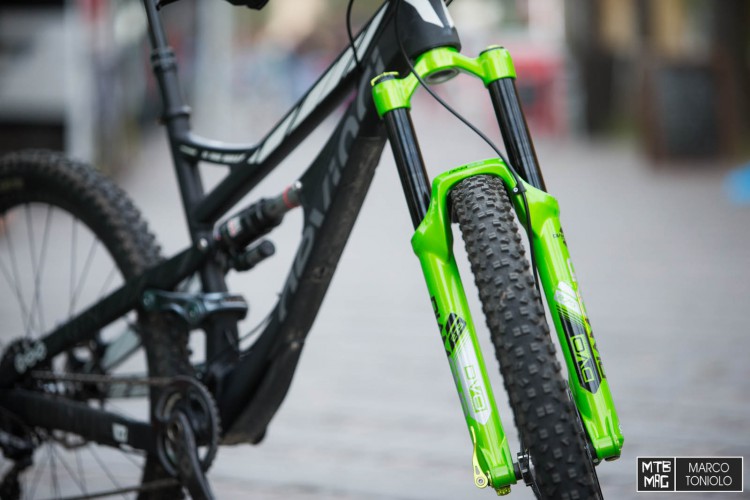 We have already covered the general aspects of this much anticipated fork during our Factory Visit to DVO Suspension in California, back in September.

The DVO Diamond is a 160mm fork which is reducible down to 140mm by using internal spacers. The fork stanchions measure in at 35mm with a black anti friction anodized treatment and are mated to bright green coated lowers and braced by a 15mm quick release axle, anodized in distinctive DVO green shade. 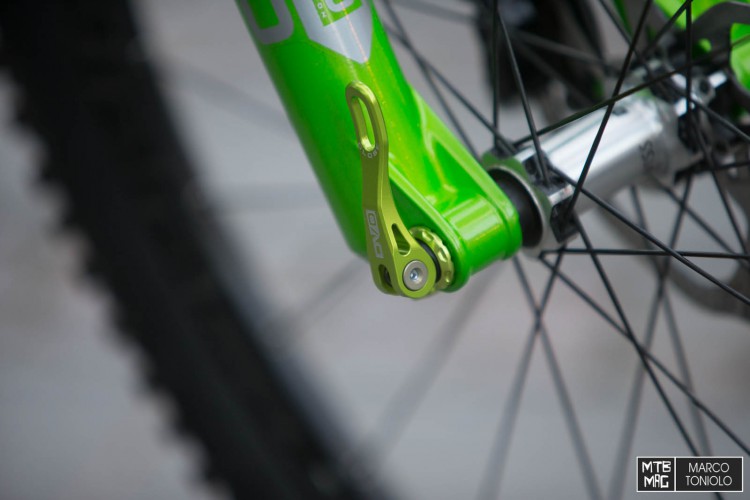 The aluminium steerer is tapered and bonded to a CNC’d crown. The Diamond brace also includes an integrated mudguard system which is user removable and adjustable via three screws. It defends stanchions and seals from the dirt moved by the front wheel. 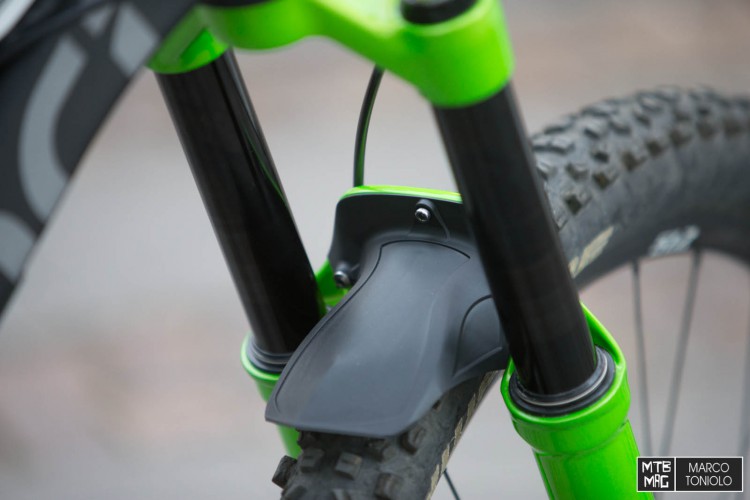 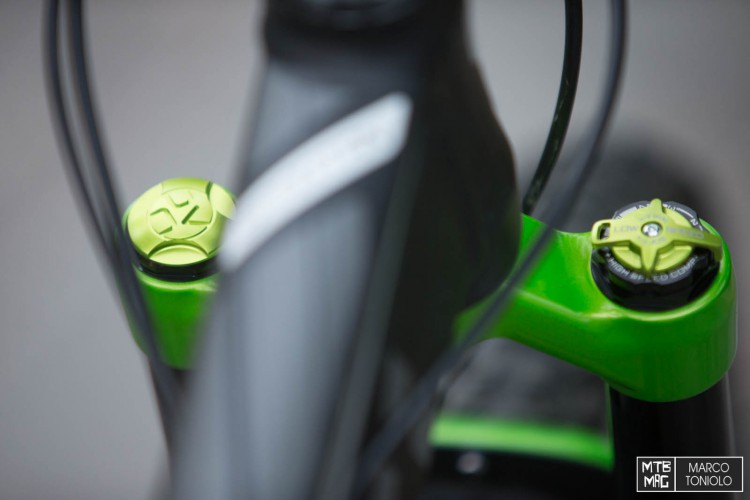 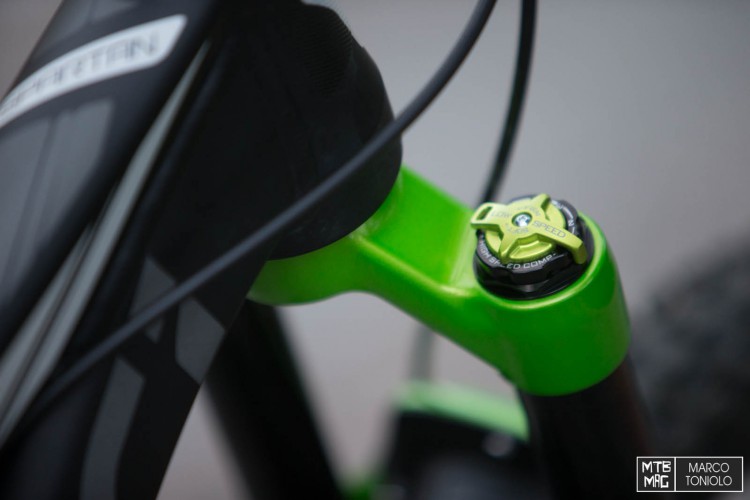 The fifth external control we have on the DVO Diamond is the OTT (Off The Top), which pass over from the DVO Emerald DH fork. This adjustment works on the negative spring preload and is controlled using a 5 mm hex key, with 14 turns sub divided into 84 positions. With this adjustment it is possible to regulate the resistance of the first part of the fork’s travel. The OTT allows to fine tune the sensitivity of the first part of the fork’s travel, without affecting the rest of the compression curve. The middle stroke, very plush, and the ending stroke, pretty progressive, are managed separately from the beginning stroke, by the air volume control and the compression adjustments. The interaction of this parameters allows a great level of customization of the compression curve of the fork. 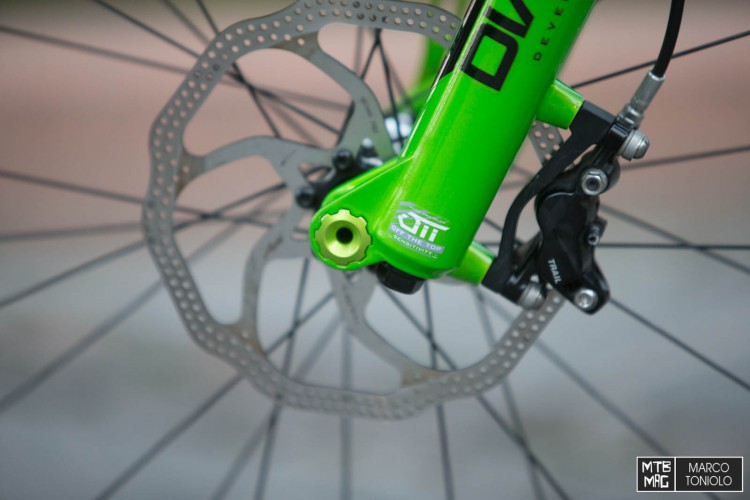 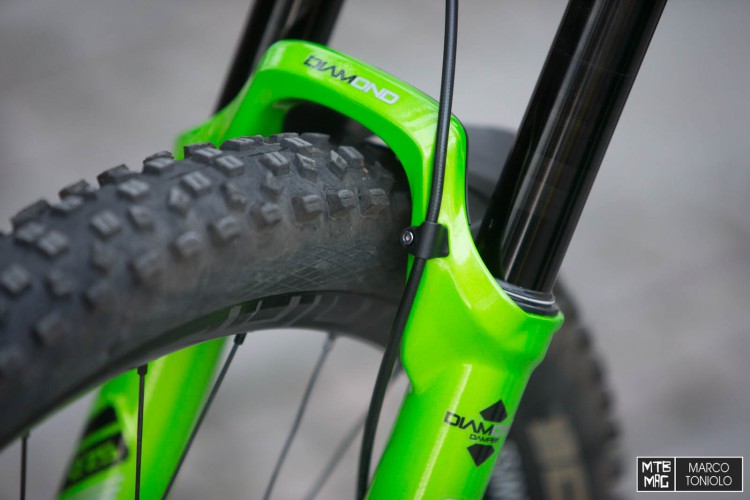 We tested the DVO Diamond on various hard technical trails and long flowing trails around Finale Ligure including some trails used as Stages in the Enduro World Series race. A great test circuit for the new fork of the American brand, that nicely impressed us.

When climbing we immediately activated the hydraulic platform, via the low speed compression adjustment, that makes the fork a bit stiffer but it doesn’t afford a complete lock. Essentially it means in the sag zone of the fork we have an optimal movement control, with no bobbing or feeling of energy being wasted.

Once pointing downhill, the Diamond gives the best of itself, as a fork dedicated to Enduro has to do. Here we discovered high performances on this fork, with excellent sensibility and sustainment. The OTT regulation allowed us to set the fork to our riding style and according to track conditions. In real terms the big sensibility of the Diamond means it keeps the front wheel in a great grip on the ground, on big and sequential impacts as well. The bottom out resistance is admirable, due to the progressive curve of the ending stroke, which is fundamental for huge impact control.

On steeper trail segments the fork is still very stable and continues to work well in the middle part of its travel, maintaining a significant level of sensitivity to all types of bumps. It maintains these characteristics perfectly also during braking, when extra forces are applied and the fork has to deal with multiple inputs all at the same time. Basically it doesn’t dive excessively and keeps working fine with no flex or torsional strains.

Stiffness, plushness and great adjustability make the DVO Diamond fork a top level product, with the capability to keep the front wheel in constant contact with the ground for an excellent grip and an impressive riding precision.

Looking forward to a longer term test, after this first ride we can say that the DVO Diamond has passed the exam with full votes.

[Comparative Test] 15 Enduro Bikes, Back to Back