In our review of the Specialized Butcher BLCK DMND we mentioned a new product from the Californian brand that we were trying: it was the Eliminator, which is now available with two versions of casing, the Grid and the BLCK DMND. The latter has a reinforced carcass, as explained in this article . 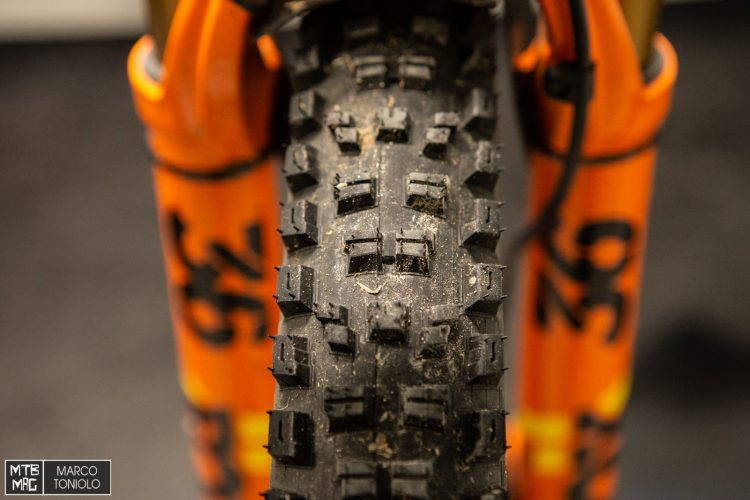 The Eliminator is a tire designed for enduro, very similar to Butcher, but with a profile in which there are blocks of transition (intermediate) knobs between the central and the side ones. The “Gripton” compound is ​​the same, which I already liked in the past. Two widths are available for both 27.5″ and 29″: 2.3 “(tested) and 2.6”.

I mounted an Eliminator Grid at the front of the Monroker Foxy that I use for long term tests, and a BLK DMND at the rear, on Crank Brothers Synthesis wheels . At the same time, our tester Andrea Chiesa ran the same configuration on an Ibis Ripmo with Santa Cruz Reserve rims with 30mm internal channel. 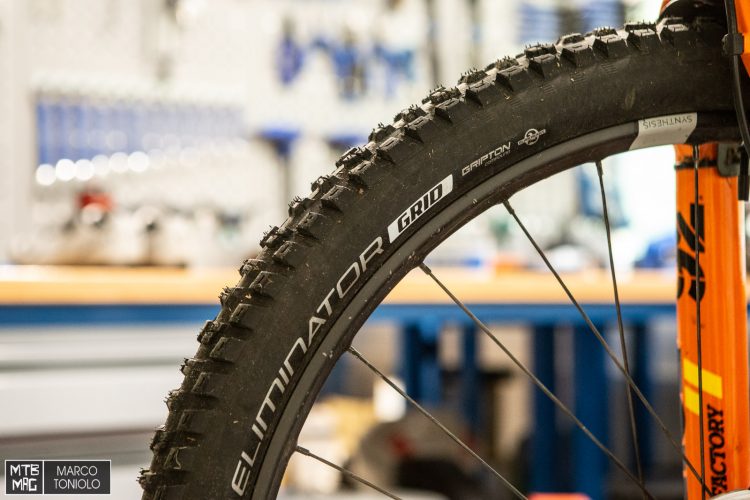 Here are the weights and widths on a 30mm inner diameter rim, inflated to 1.5 bar:

The differences in the widths are due to the different carcass, the Grid is lighter and more compliant, the BLCK DMND is stiffer. The broad width for both tires is largely caused by wide rims. At the end we are faced with a 2.4 “tire, with rather soft side knobs and varied pattern central lugs mated with paired transition knobs.

The Eliminators have been tested for over a month, largely on the dry terrain that’s characteristic of Autumn in the Alps until the end of October. I rode them at a pressure of 1.5 bar at the rear and 1.4 at the front. After the cyclone on Monday, I took advantage of a very wet terrain between trails which turned into streams and left the leaves on the ground quite soggy. 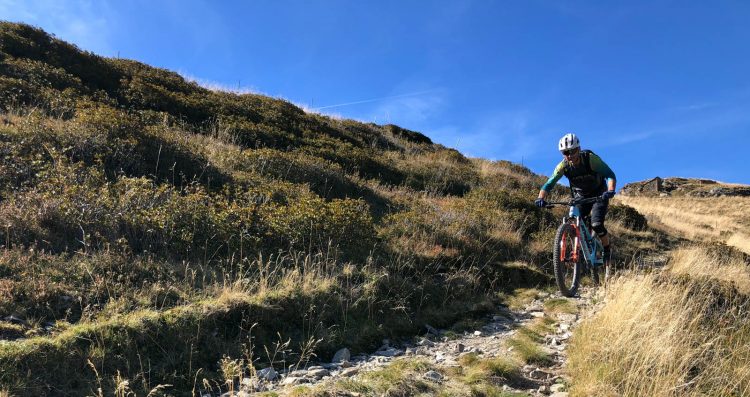 I found the best option was to mount the lighter duty tire in front, even though it exceeds a kilogram, while at the rear, 1.2kg may seem like a lot for enduro use, but you can be sure not to puncture even the most battered and haggard sections. Given the speed of modern 29″ enduro bikes, I’d recommend this set up and note that it makes the much discussed tire inserts completely useless.

Compared to the Butcher the Eliminator is slightly wider (.1 inch), with the same rim and pressure, which gives a little more confidence up front, through its generous volume. It rolls a bit faster, probably thanks to the intermediate blocks, which is convenient when riding uphill on compact surfaces.

As you lean in the corners, the transition between center and side knobs is not noticeable, precisely because there are no empty spaces between them. Consequentially, the Eliminator is very predictable in its behavior. The cornering grip is excellent, I would say identical to that of Butcher, both on hard and soft terrain. In the wet I was quite surprised: in a couple of situations I was convinced that I’d end up on the ground because of wild, slippery rocks, but I was always able to recover the front before it was too late. Although it’s not a mud tire, it does clear crud well.

The BLCK DMND carcass provides added security, I got confirmation when I punctured during a descent where I didn’t stop until the end. I did not stop because the loss of air wasn’t much of a bother, although it was quite relevant, by the time I reached the end of the trail. It was a puncture exactly in the center of the casing, I do not know if it was due to a nail or a particularly sharp rock. I repaired it with a plug and from that day (September 26th) I’ve continued to use it until today. It’s worth noting that the section of trail in question is full of steps of sharp rocks.

This is the state of the rear tire at the end of the test: The front has no significant signs of wear, you can see it in the first photo of the article. Andrea Chiesa, in his ride time hasn’t punctured at all.

The difference between the two casings is difficult to evaluate because there are different stresses at the front and rear of the bike. Let’s say that, with the DMKD BLCK out back and the Grid in front, the bike is well balanced in terms of absorption of small bumps and larger impacts, which will inevitably impact the rear end more. The DMND BLCK is better “supported” thanks to its reinforced sidewall, but from this point of view I can’t say I noticed a big difference at the front when I swapped out the Butcher BLCK DMND with the Eliminator Grid. 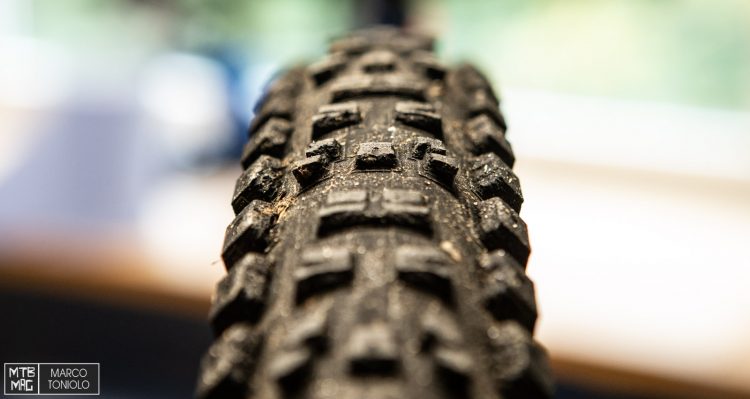 The Eliminator is a very ideal enduro tire: it offers excellent grip on all types of terrain, which gives it a great “allrounder” character. Having a choice between the two types of casings is nice because it allows you to mount the lighter one on the front where you’re less apt to need heavy duty reinforcement. The BLCK DMND casing is confirmed as a very solid choice, and we’d particularly recommended it out back.

Prices: not yet available in Euro, but should will be similar to those of the Butcher. Here are the prices in dollars. 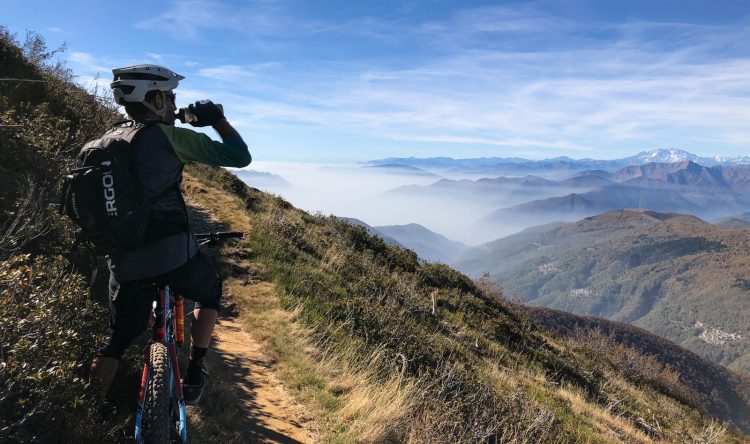