Freiburg component manufacturer Intend Bicycle Components heralds a new era for the new year. “New Age” describes a comprehensive update of the suspension fork lineup, which contains some technical subtleties and also brings a new model with it.

The Intend suspension forks have been designed, assembled and developed by Cornelius Kapfinger, for around five years and a lot has happened in these five years. Tube diameters have increased, details have been refined and just under two years ago, the reconstruction from non-boost to boost was necessary to reach more customers. During this time, the number of forks sold continued to grow.

This has given Intend reason enough to take the next step and introduce their 2020 model range with the name “New Age”. With the New Age model series, a special upsidedown model called Flash is being created in a special “Freudenhammer Edition”, which will be introduced in the next few weeks. In terms of weight, this will line up well above the Edge enduro fork and was specially designed for the requirements of enduro sport, which is becoming ever tougher, and the requirements of eMTB that have to be assessed in terms of loads placed on the fork. 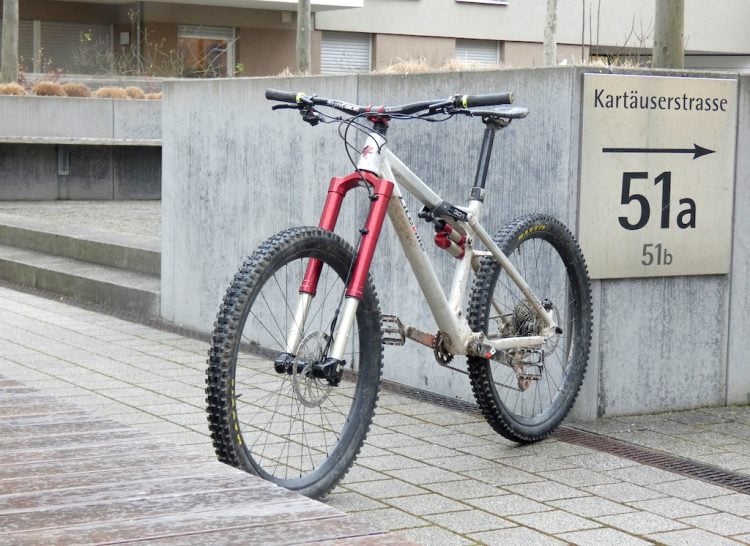 The changes to the New Age suspension forks include the following points:

Less mass on the shaft, more mass in the crown 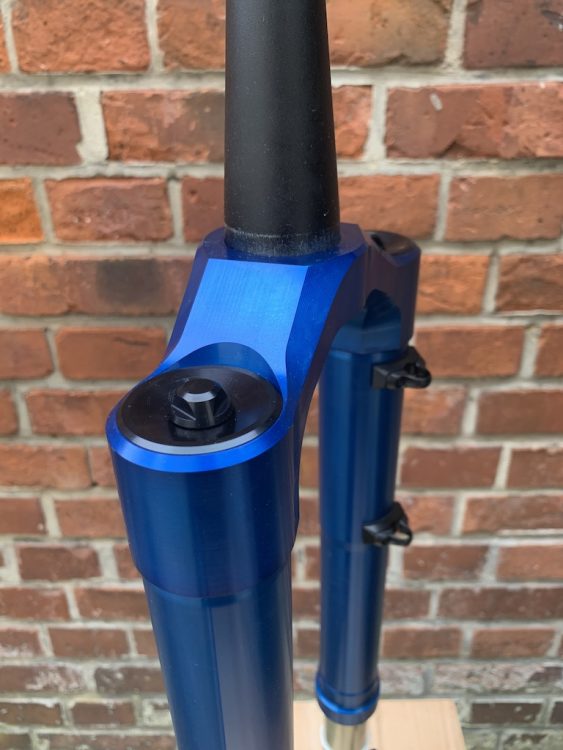 New masssive crown for increased torsional stiffness. Cornelius Kapfinger states that the prejudice that USD forks are not torsionally rigid is a major concern for potential customers. Although this concern is completely unfounded, he will continue to try to counteract the prejudices.

With the Intend Edge New Age, the mass on the shaft is reduced, but the mass in the bridge is increased. The current shaft is no less stable and firm as with all other manufacturers, no lightweight construction was carried out. With the same total weight, however, an increase in the torsional rigidity can now be achieved. In order to achieve this, the Edge New Age moves mass from the shaft into the bridge. If the mass is located in the bridge, it can increase both torsional and directional stiffness, if the mass were in the shaft, it can only increase the latter. 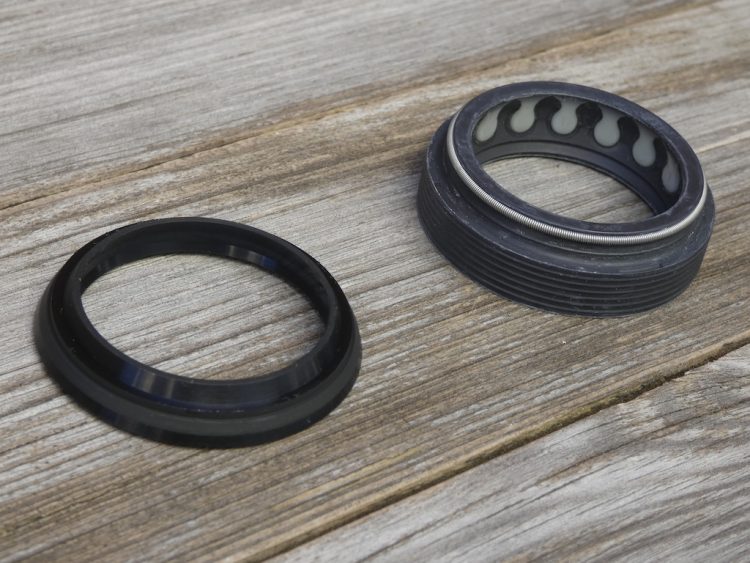 The old seal is seen on the left, the new seal on the right.
Cornelius says, “With the increasing number of forks sold, there is also a problem that I did not consider: supplying spare parts independently of me as the manufacturer. As a one-man company, vacation also means incapacity for Intend. However, wear does not adhere to time agreements and with the increasing number of suspension forks, it is necessary that spare parts such as seals can be obtained everywhere.

Therefore, SKF dust wipers in 35mm (without collar) are now installed in the New Age suspension forks. The seals cannot be retrofitted to the “Old Age” suspension forks. The supply of spare parts for the previous dust/oil seals is guaranteed forever (since they are industry-standard parts). There is no functional advantage or disadvantage for new or old suspension forks, only that the new seals are around 20g heavier ”. 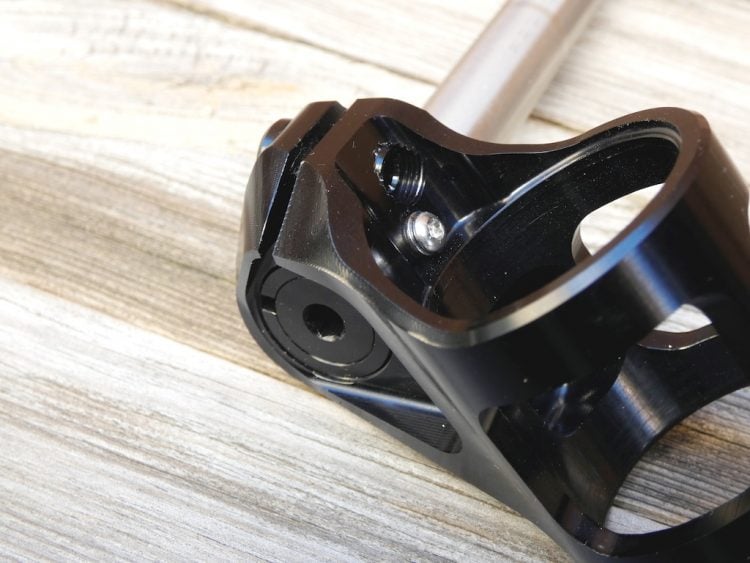 “Unfortunately, the previous 20to15 axis adapters caused problems for some customers. To further simplify handling, the adapters are now screwed with cross screws. This solution cannot be retrofitted to old age forks, but the supply of the previous 20to15 adapters is 100% secure and I believe they also work perfectly.” 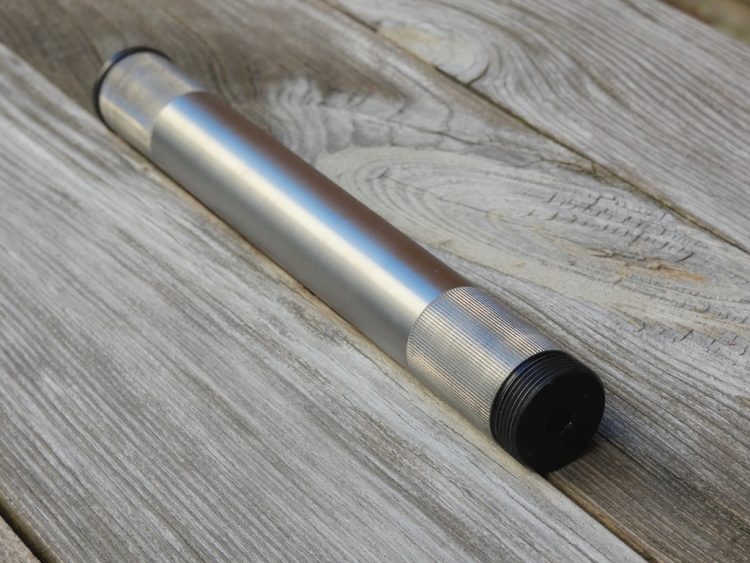 This change is only relevant for extremely hard riders. During extreme driving maneuvers, the axle could in some instances, slightly turn in the dropouts. This has never happened to me in my riding and I have no feedback from customers in this regard either.

It has happened occasionally with my really fast team riders and to avoid this happening in the future, the clamping surfaces are now knurled, which enables a better clamping connection. This innovation can be retrofitted with a new axle if previous customers never had any problems in this regard, but it’s also not necessary.
Axles are available in two versions: light and heavy. The heavy axles have doubled wall thickness for maximum torsional rigidity and weigh around 170g, roughly twice the mass of the light axle. I ride the light axle myself. Tough, heavy riders and those with a bit of self-confidence can choose the heavy axle. With the new axles, the occasional turning of the glued hexagon socket is eliminated. 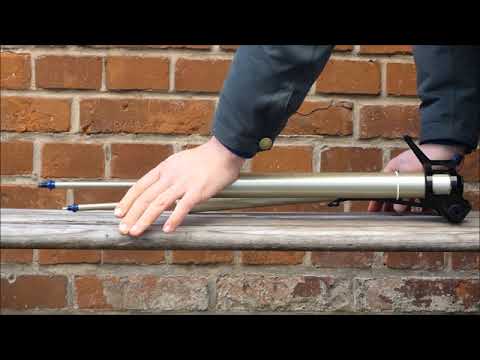 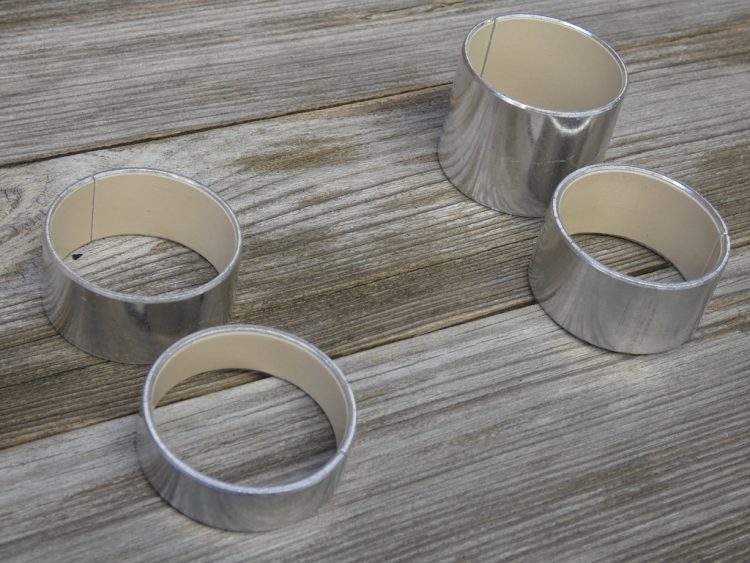 Comparison old busings left and new busings right
“The growth of my company goes hand in hand with an improved supplier structure and I can now have some parts manufactured according to my own specifications. This is what happened with the sliding bushes. A big thank you goes to the employees of the company SR-Suntour who made it possible for me to get into the suspension fork business with high-quality and precisely fitting sliding bushes.

Now I have invested heavily in my own molds and have bushings with increased height manufactured according to my own specification. Unfortunately, they are a few grams heavier, but they also reduce the surface pressure. These sockets have been installed as standard for a few months now.” 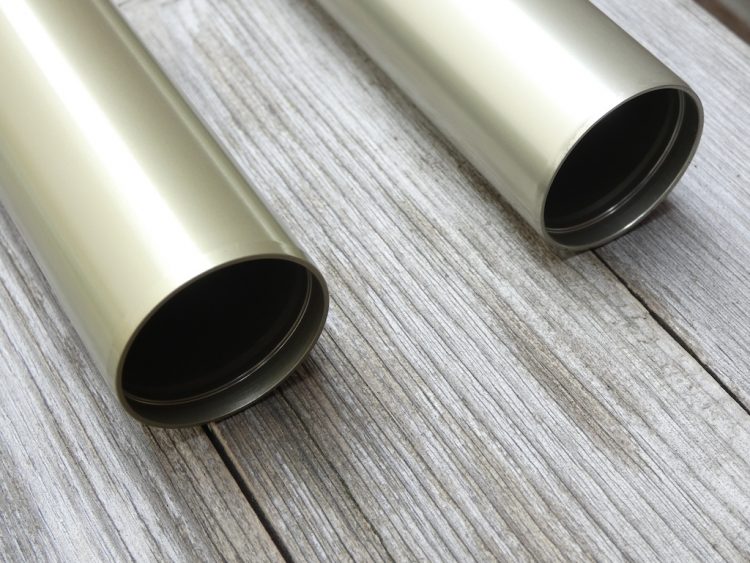 Comparison of old Gold Slide Coating left and new Royal Flush Coating right
“For around 2 years now I have only been building the beloved and hated gold slide coating. The reason for the change from black coating to natural hard anodizing was the excessive risk of wear of the black coating. The black pipes initially installed were occasionally affected, which was unacceptable to me. And again and again, I discover a slight lightening of the black anodized color on competitor forks and am therefore very happy about my decision. Since the introduction of gold slide coating, the number of wear cases has dropped to 0.

But, improvement is everywhere and so, I found a supplier who subsequently sanded the pipes again and optimized the surface roughness on the new sliding bushes and the Fox Gold lubricating oil using a precisely adjusted polish.
Due to the tribologically coordinated surfaces, the friction and the stick-slip effect were significantly reduced. You can recognize this by the slightly lighter anodized color. The Royal Flush Coating has been in series production for almost a year and the results and durability are undoubtedly sublime.” 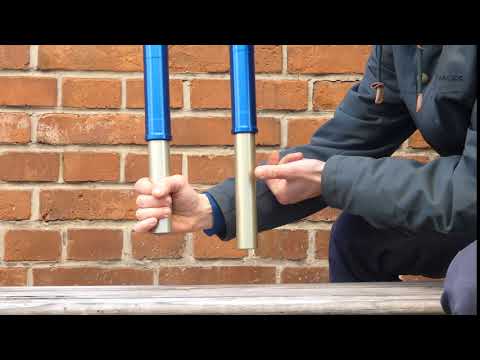 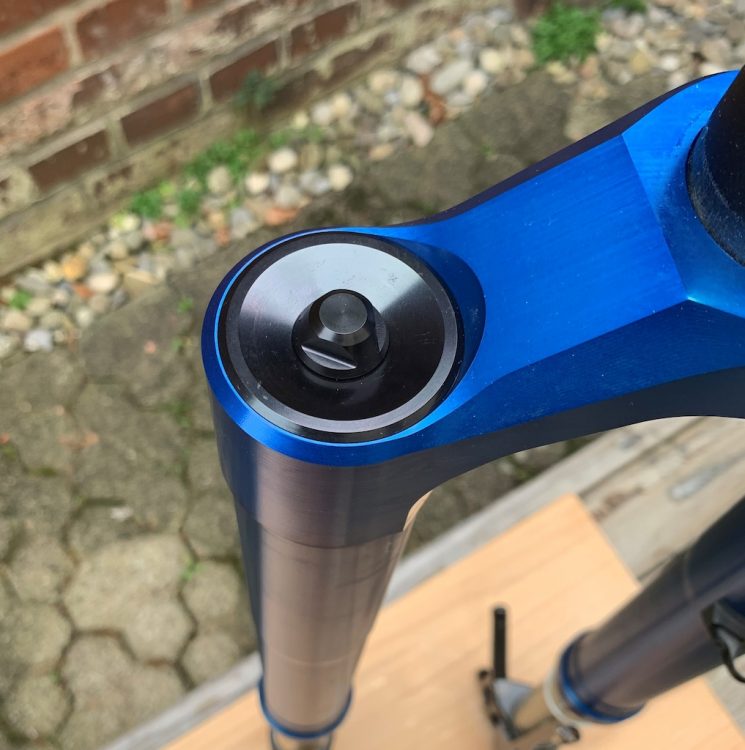 “One of the most characteristic features of the Intend suspension forks are the hi-fi stereo adjustment knobs. One joy, the other suffering, they give way to specially made CNC knobs for the compression, rebound and valve caps on the New Age forks. This significantly improves the appearance of the suspension forks and is a clear indication that the product has now grown up since it is no longer necessary to use products from third-party manufacturers. The new knobs can be retrofitted to previous suspension forks.” 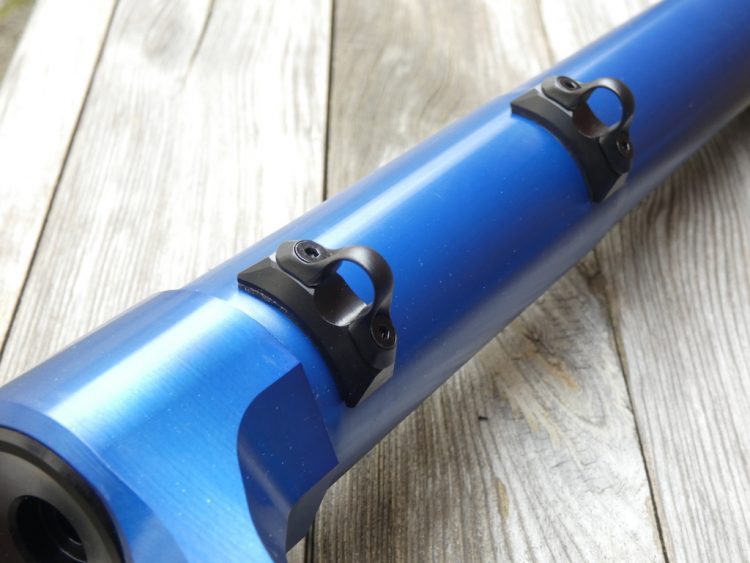 “In parallel to the adjustment knobs, the cable routing was also made more appealing. Thanks to a contact by the Trickstuff company to the Polygon DH team, which in turn made contact with the Promax company from Taiwan, I was able to get the shapely and screwable plastic guides and thanks to a TESA employee who reads on Facebook, they now have double-sided TESA industrial adhesive tape on the forks perpetuate.

Thanks to everyone involved, sometimes it takes five corners to get to a goal! The new cable routing is completed with a CNC milled cable clamp for the hose guide arm at the dropout. Of course, this solution can be retrofitted to previous forks. Only the Hose Guide Arm is only compatible with the Boost models, but not with the older non-Boost models.”

No more pre-orders, all forks are in stock

“Independent of the product, there is also a change at Intend that the products are almost all in stock and pre-orders are no longer possible because they are not necessary. Due to the variety of variants, it can always happen that a color or special variant is sometimes not in stock, but the tendency is clearly in the direction of stock items, away from production on demand. So all Intend suspension forks and almost all other Intend products are now in stock and, depending on the workload, available within an assembly time of 1-3 weeks.”

“Strictly speaking, there is no change here, because the previous Edge forks also met all the requirements of the e-bike segment according to the EFBE test laboratory. But specific areas of application also require special marketing. In this respect, it is now announced that the Intend Edge is absolutely suitable for eMTB because its design makes it inherently more stable than conventional suspension forks.” 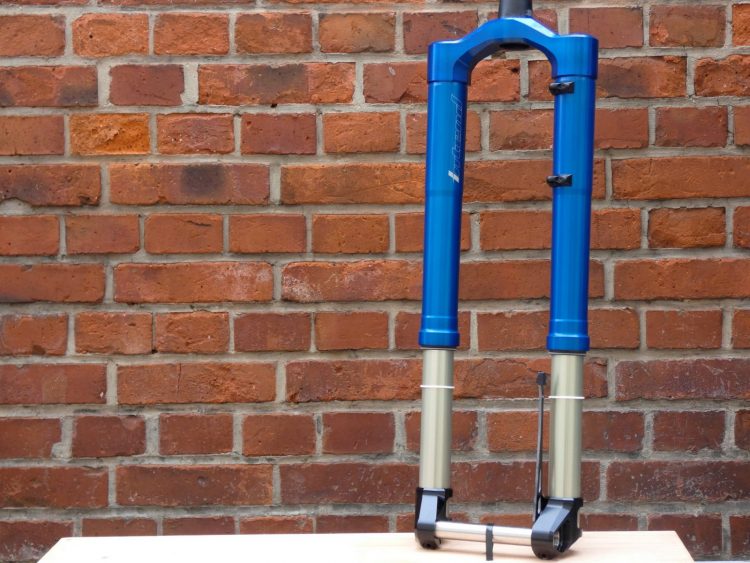