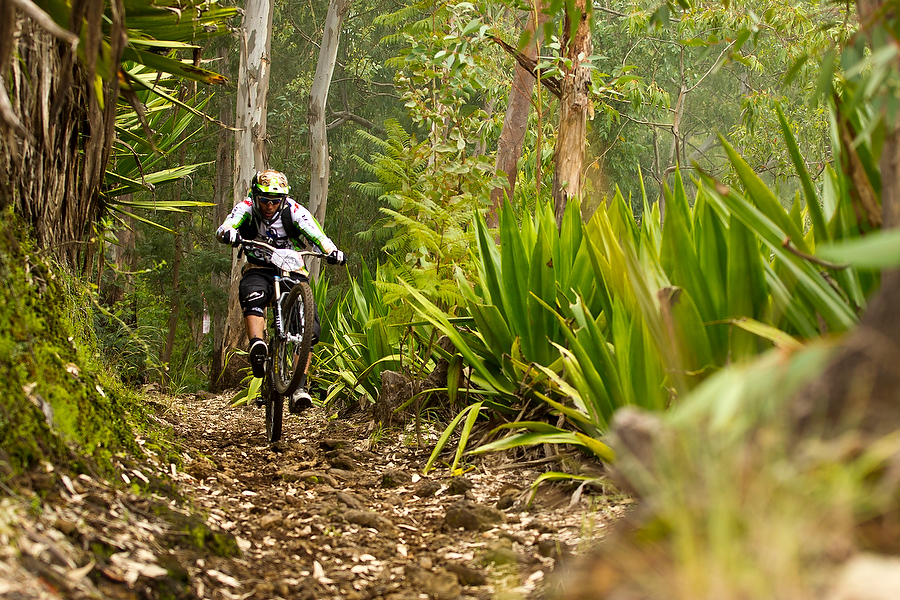 Day 4 > report Photos Sven Martin Thursday the 10th of February: riders, photographers, cameraman and staff rolled up their sleeves for the three and a half hours climb to reach the base camp on the peak of the Fogo volcano, few 1000m higher. Chris Gallo, also known as Poulet, keeps building his legend by arriving first on the top and wining the “Pep’s Trophy”!!!

From the top, the view on the archipelago is fantastic, the sun is right on time, everybody is tired but ready to go. Only down side, Fred Glo, while walking the track, realized that the run is a lot worse since the last pre ride check… Riders are then warned to stay alert regarding their security in the first place, they’ll ride without checking first and rescue could be tricky to organize in case of troubles…
Around midday, the Urge’s Run 1 started and, we’re sure of it, will be kept in everyone’s memory for a long time. Start in the lava and gravels on an extremely steep terrain, crossing through a village on a track section, then diving on a single track in the jungle to reach the sea… and the finish line. Punctures, falls, every kind of surprises, but every rider finished in one piece, exhausted but delighted! The most serious fall was Sabrina Jonnier’s who stroked a rock and went OTB! Scarier than painful, she finished with a big bruise but got her good mood back immediately. René Wildhaber who was following naturally stopped to help her and the organization decided to give him a time bonus of 1 minute for this nice gesture.

The riders are more than ever there to protect themselves and help each other in these isolated spots. This first run was won by Jey Clémentz for the male and Tracey Moseley for the female. The day ended with a meeting between the female riders and the Cape Verde women that Urge FOR Cabo Verde will support with their charity actions on the Fogo Island Friday the 11th of February: Liaison day when the riders will be able to recover a bit with a boat trip and 2 transfers in a row with the TACV planes.

Goal: To arrive at the end of the afternoon in the town of Mindelo on the Sao Vicente island where they’ll meet tonight the immense Cesaria Evora, “godmother” of the Urge FOR Cabo Verde programs. A night full of emotions in prospect… Mindelo will be the departing port of a cargo that’ll take the team to the Santo Antao Island where the last three runs of this Urge Cabo Verde will take place on Saturday and Sunday… To be followed

Pedali e scarpe per all mountain