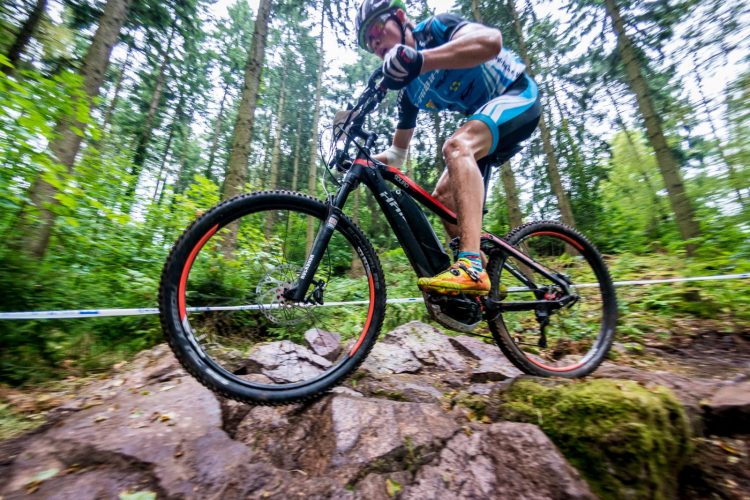 As part of the Mercedes-Benz UCI Mountain Bike World Cup in Albstadt, the first UCI E-MTB race in Germany will be held on 18 May. The women’s and men’s races – which will take place on the Cross-Country World Cup course – are a dress-rehearsal for the first UCI E-MTB World Championships in Mont Sainte Anne, Canada, at the end of August.

The two official UCI-registered E-MTB races are a first for Germany and given the growing popularity of this sector of the industry, their introduction is logical. Electric bikes are booming: in Germany nearly every fourth bike sold is one with an electric motor.

The Zweirad-Industrie-Verband (ZIV) noted in 2018 for Germany that e-bike sales grew by a staggering 30 percent to 980,000 e-bikes sold. The world cycling federation (UCI) has embraced the development by introducing officially-sanctioned E-MTB races, announcing the first ever E-MTB World Championship which will take place in Mont Sainte Anne, Canada, at the end of August, and launching the first E-MTB World Cup series which will begin in 2020.

In Albstadt, we are following this trend and have added two e-bike races into the program of the Mercedes-Benz UCI Mountain Bike World Cup. Women’s and Men’s races will both last 1 hour.

Athletes such as French double Olympic champion, Julien Absalon, and the Italian Olympic bronze medalist from London 2012, Marco Fontana, have already jumped on board with idea of e-bike racing.

“I cannot wait for the World Championships in Mont Sainte Anne. In ten year’s time I’ll say, I was there”, Julien Absalon is quoted in a UCI press release. For him it is an extension of the Olympic cross-country sport. “It’s good that an association like the UCI picks that up. The manufacturers, the athletes, the audience are here.”

This is not only relevant to the World Championships in Canada but also to the World Cup here in Germany. Stephan Salscheider, Managing Director of the race organisation (Skyder Events & Track Company), underlines the statement by Julien Absalon: “Once again we are innovative. We also were involved in the process of establishing the regulations.”

Innovative, but also integrative. “Of course we want to open the door for the athletes who enjoy E-MTB and give them the opportunity to continue being part of racing and the sport as a whole. At the same time, we also want to signal to the manufacturers that the World Cup remains the ideal test field and the ideal stage for the presentation of their products”, says Salscheider.

From the point of view of the city of Albstadt as organizer, we can also look to the near future.

“We want to offer a platform for this youngest facet of cycling as part of the Mercedes-Benz UCI Mountain Bike World Cup. At the same time, of course, this is also a window into the future, ie the 2020 UCI Mountain Bike World Championships in Albstadt, where for the second time (and for the first time in Europe) rainbow jerseys will be awarded in this new category”, emphasizes Jo Triller from the Sports Department of Albstadt.

In the Bullental a competition format will be tested, one which the organisation would like to implement at the 2020 World Championships. In contrast to Mont Sainte Anne, where the title will be won on a ten-kilometre track, Albstadt will be raced on the four-kilometre cross-country lap. A shorter course will make the implementation of the media much easier and the viewers on site will get their money’s worth.

The core elements of the regulations are the limitation of engines to a maximum of 250 watts of power and support from the engine up to 25 km/h. Above 25km/h, athletes need to accelerate their pace through muscle power alone.

In addition, the engine must only be active when pedalling at the same time. A jump start without pedalling is only allowed up to 6 km/h.

There must be no battery change during the race, the battery must be attached to the bike from start to finish and no additional batteries are allowed.

The e-bikes are tested before the start and in case the rules are violated, the rider is not allowed to start.