With this article we enter the fourth round in the series of MTB Mag 2016 Readers Awards where you, the reader, can elect your favorite bike amongst those nominated by the editors. The protagonists of this survey are 15 downhill beasts that are hungry for speed, selected among those that we tested or featured on MTB MAG added for competitive merits – such as bikes that have earned the top 10 Overall on the UCI DH World Cup. Also in this survey, click on the name of each bike and you will be directed to the relevant test article or presentation, with all the details.

All MTB MAG Readers Awards votes will continue until the end of 2016: this DH bike vote, but even the previous ones about Trail , Enduro and XC.

The DH weapon from the leading direct sales brand has been developed by Fabien Barel. A carbon frame with an aluminum rear end is equipped with a Horst link and pull levers for the managing of the compression curve. The rear wheel travel is 203mm and geometries are widely adjustable thanks to the headset cups that let you adjust the head angle by +/-1°, while the length of the chainstay can be set to 2 different positions. The wheels are 27.5″ and the frame has a number of rubber protective boots with internally routed cables. 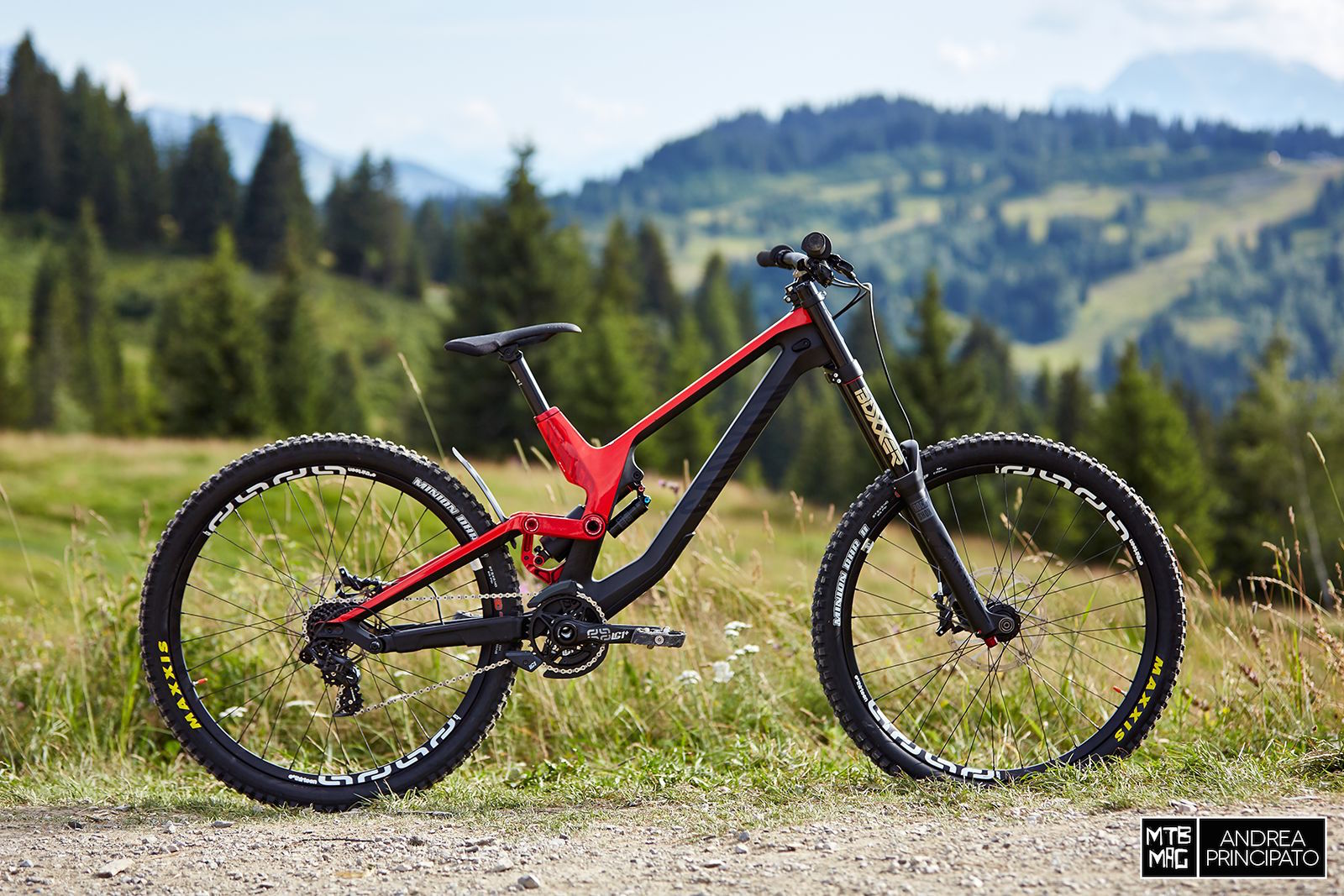 The bike that led Rémi Thirion to 8th place in the World Cup Overall is entirely made of aluminum alloy, with a high Single Pivot and a rate modifying linkage operating the shock.  A pulley is mounted at the main pivot and integrated into the rear end to prevent chain growth. The travel is 220mm and wheel diameter is 27.5″. 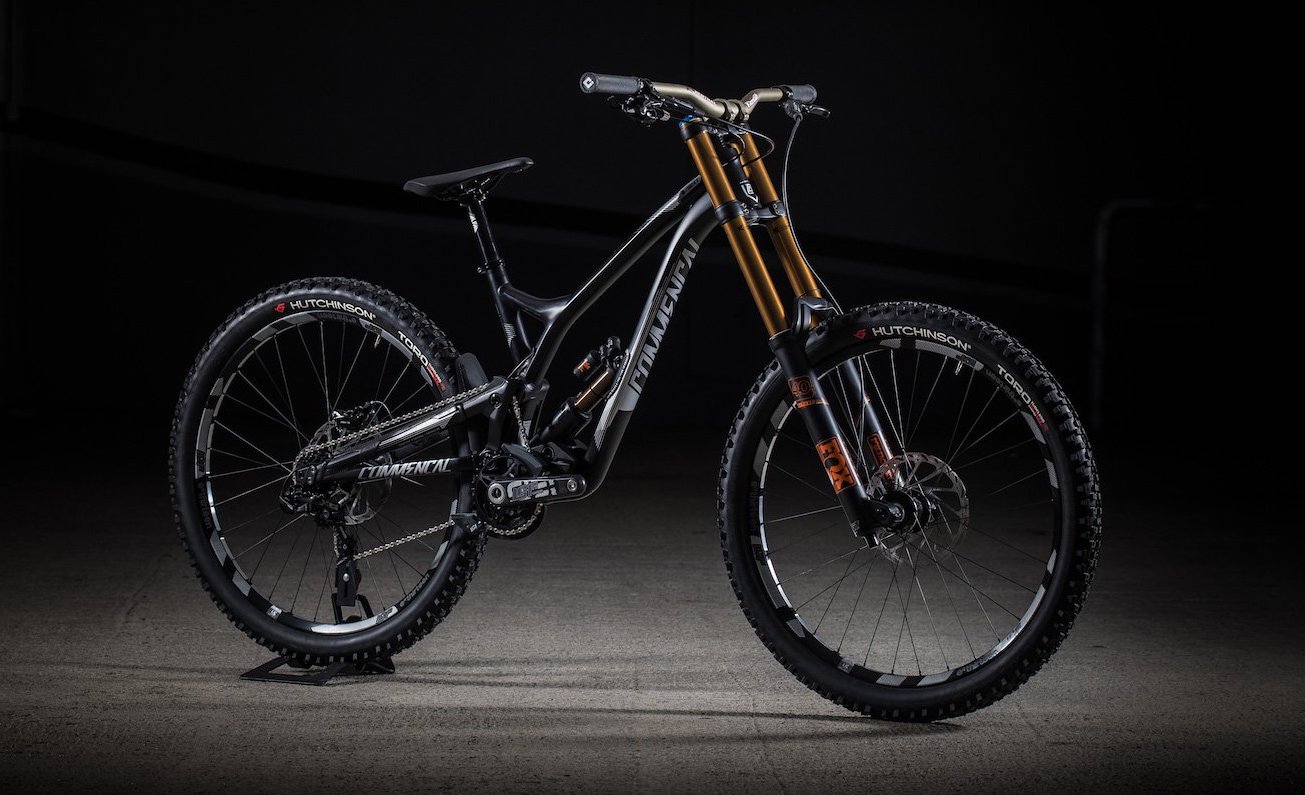 The latest evolution of the DH bike race from the Canadian brand has 27.5″ wheels and a carbon frame with aluminum chainstays. The Split Pivot kinematic is based on a Single Pivot with a pull style rate modifying linkage. The coaxial Split Pivot isolates braking forces so they don’t interfere with the suspension. The rear wheel travel is 204mm. The front and rear end have numerous protective bits which are both rubber and carbon. 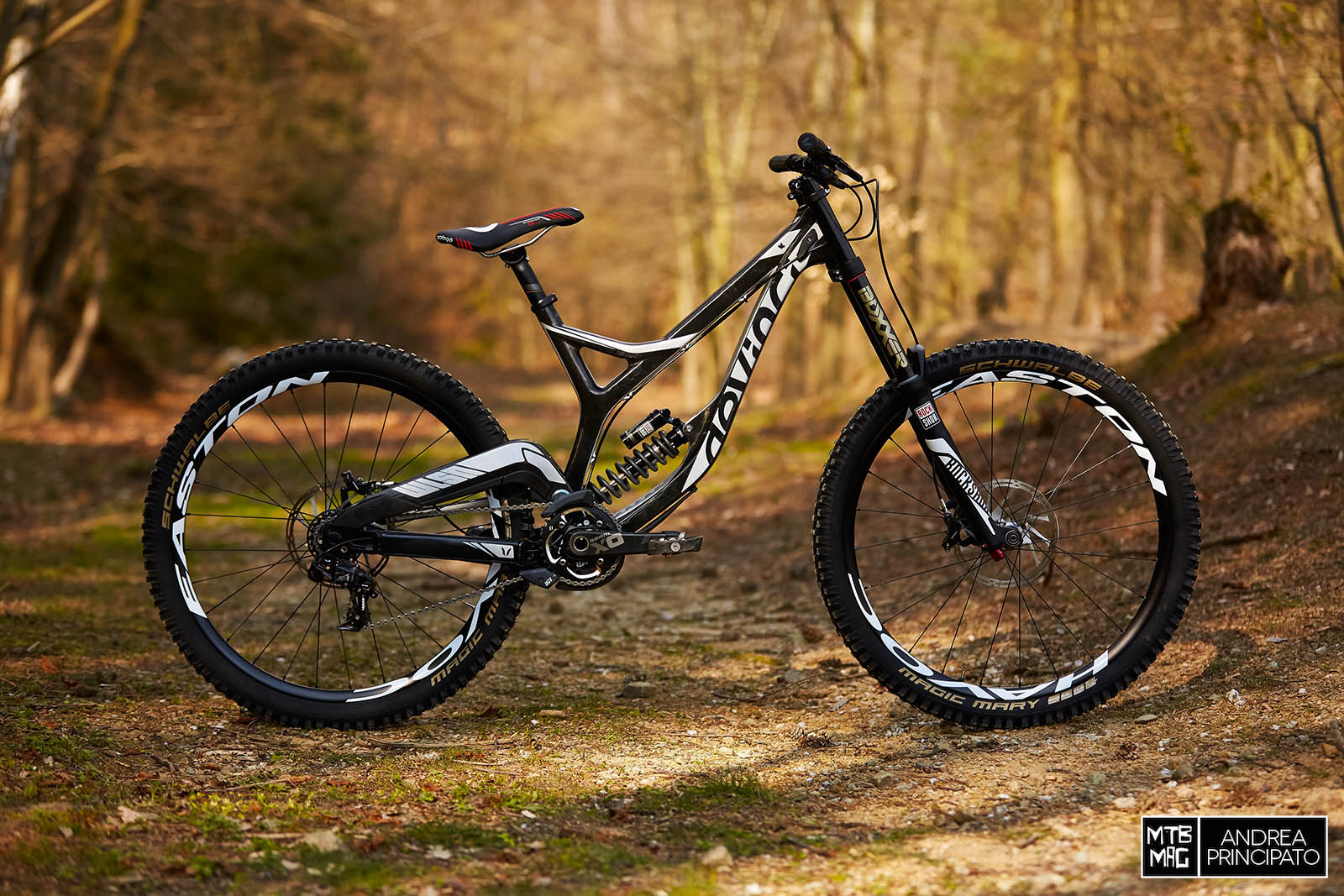 Developed with the Athertons while they were riding on GT, the Fury is a Single Pivot in terms of kinematics but it comes with the latest evolution of the i-Drive system which separates the bottom bracket from the frame to optimize the pedaling performance while the suspension is running thru its 210mm of travel. Frame and swingarm are made of aluminum and have several rubber protections. The wheel size is 27.5. 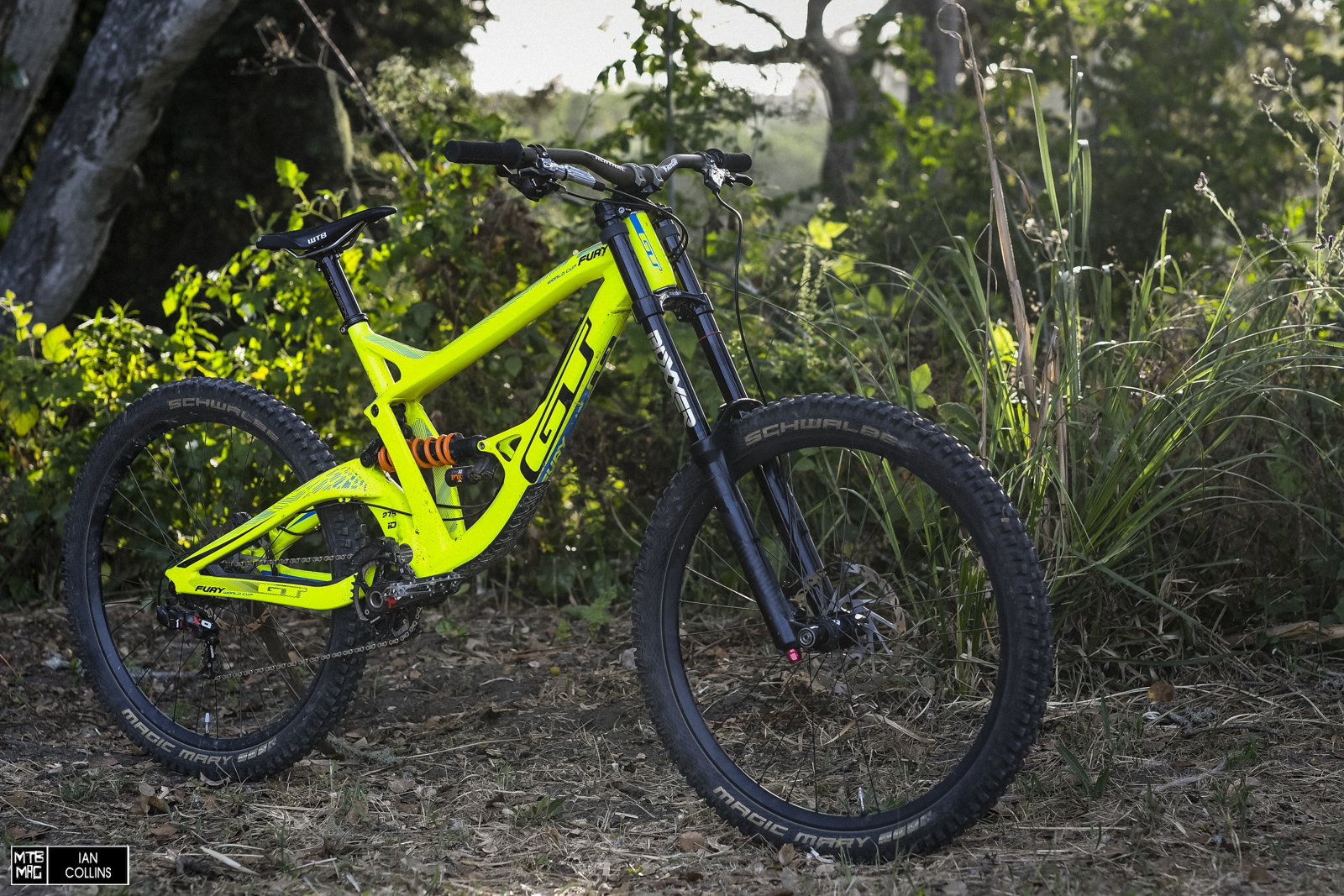 Australian Connor Fearon led the Operator to the World Cup Overall podium with a 5th place. The frame is made entirely of aluminum alloy and uses 27.5 inches wheels. The mechanism is a 4 bar style Single Pivot that provides 200mm of suspension travel. The cable routing is internal to the frame which is equipped with several rubber protective bits. 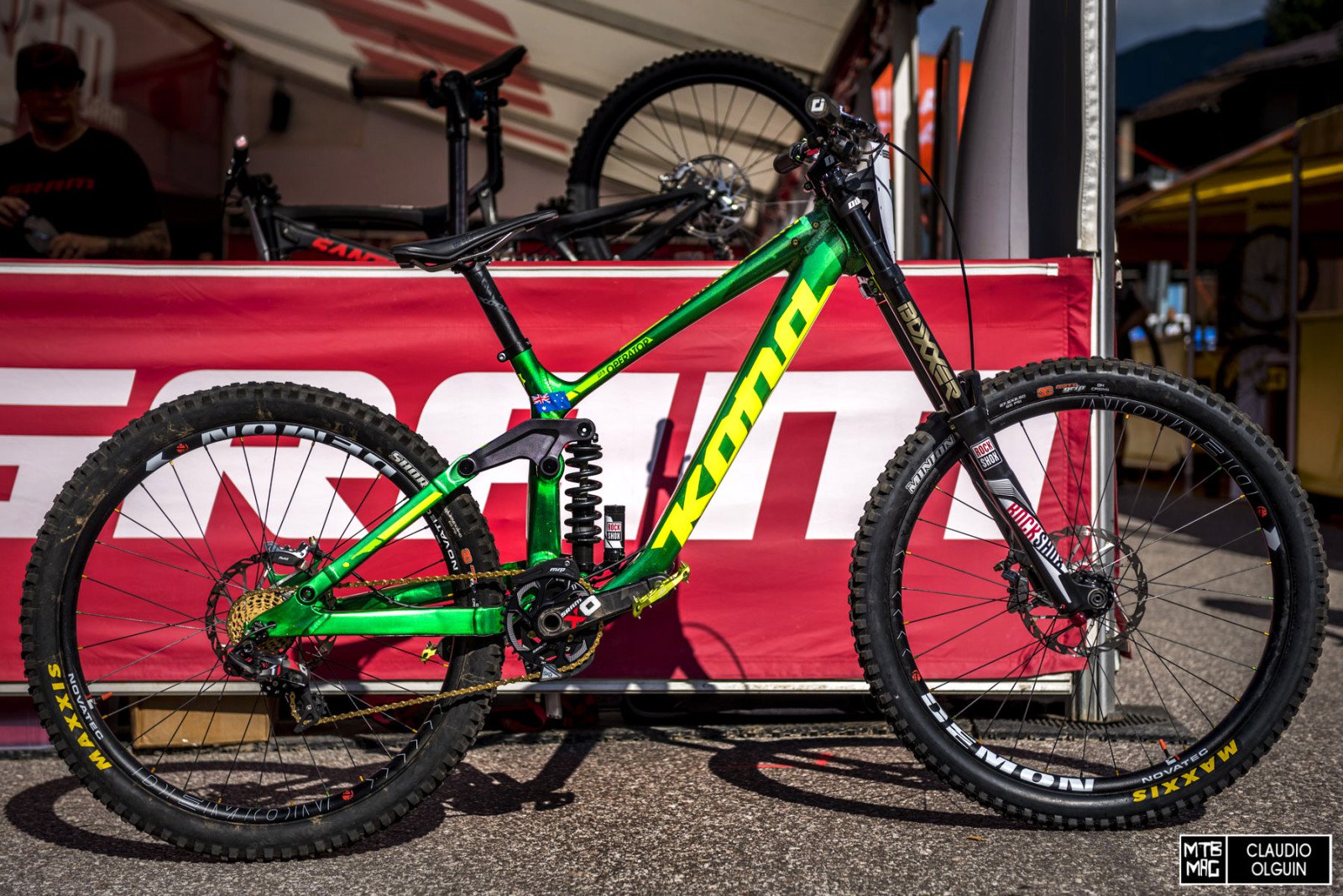 The leading French brand’s DH bike: developed by the record holder of World Championships DH titles, Nicolas Vouilloz, and winner of last year’s World Championships Loic Bruni. It has an aluminum frame with a Single Pivot and a pull style rate modifying linkage system that manages 210mm of travel out back. The wheels are 27.5″ and its cable routing is internal to the frame. The head tube angle is adjustable by way of +/-1° headset cups. 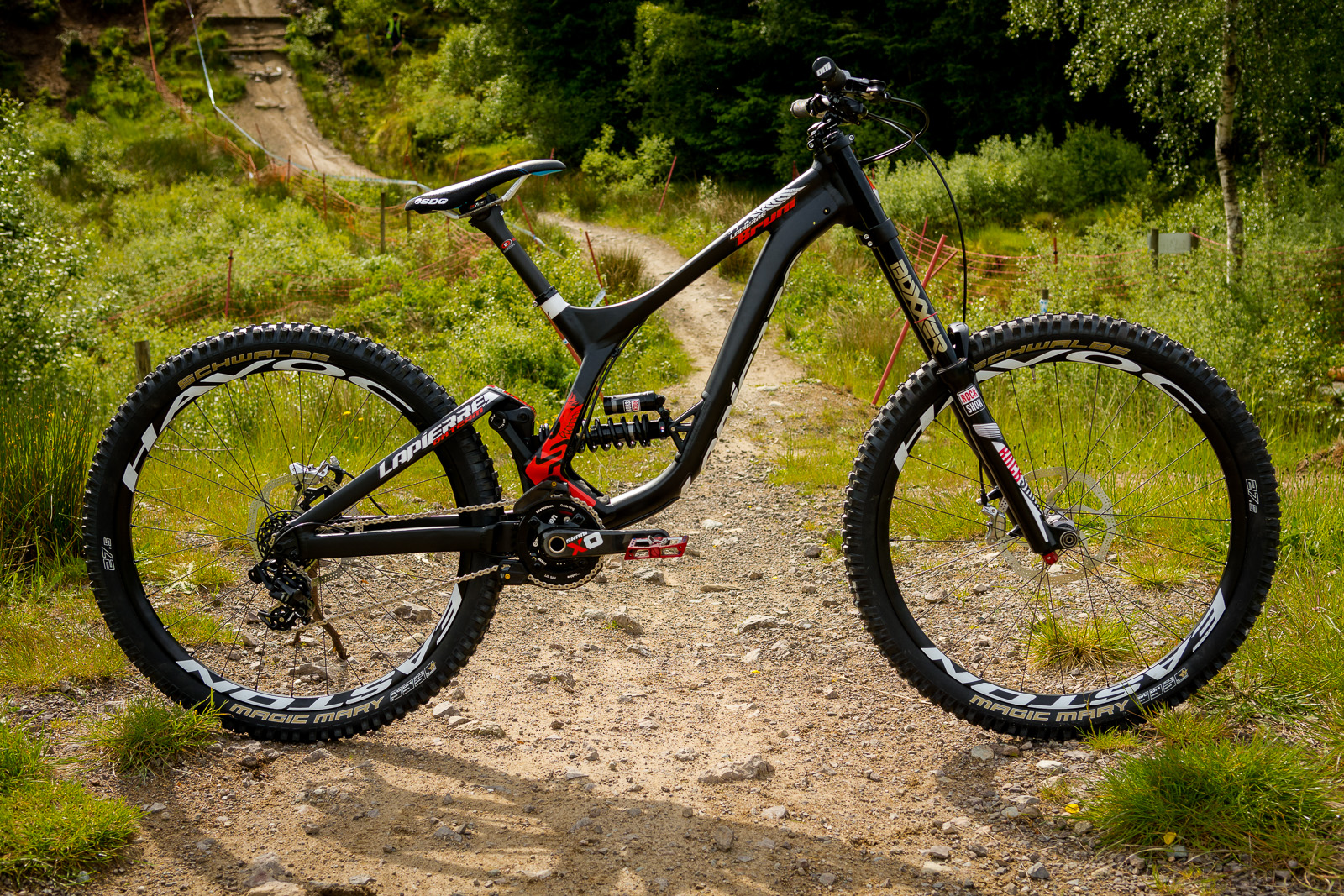 The flagship of the Turin artisanal brand has a relatively lightweight aluminum frame with DH-Link, a proprietary Virtual Pivot system which provides 210mm of suspension travel for its 27.5 inch wheels. High end paint and customizable decals are available to configure the bike’s aesthetics to suit your taste. 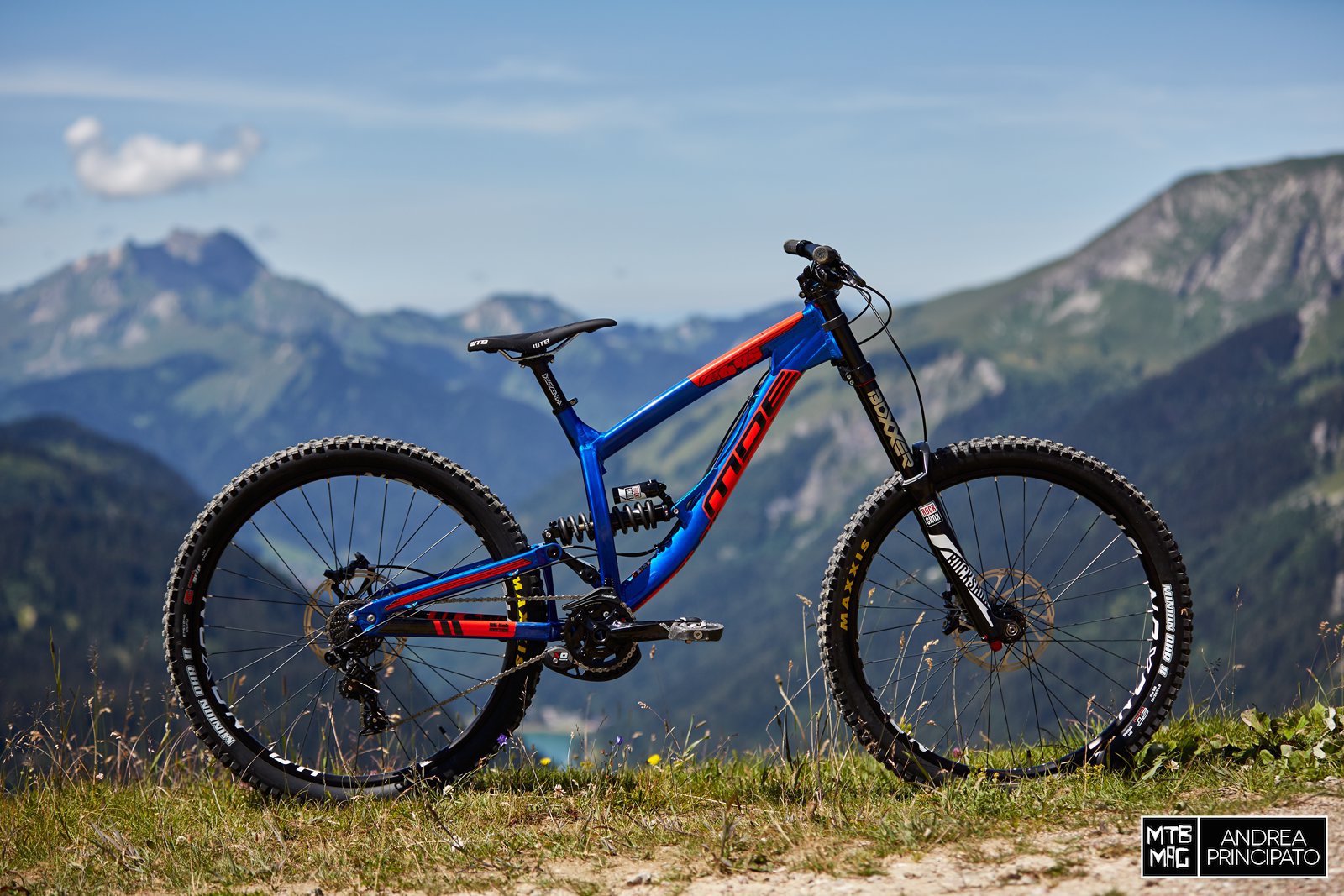 This year the Summum took the 1st, 2nd and 3rd steps of the World Championships podium in Val di Sole, thanks to Danny Hart, Laurie Greenland and Florent Payet. A full carbon frame for one of the lightest DH bikes on the market. The wheels are 27.5″ and its 205mm of travel is managed by the Zero Suspension System, a Virtual Pivot Full Floater. The cables are run inside the frame and it features adjustable geometry: the steering angle can be adjusted to +/-1° or +/-2° while the length of the chainstay can be set to 4 different sizes. 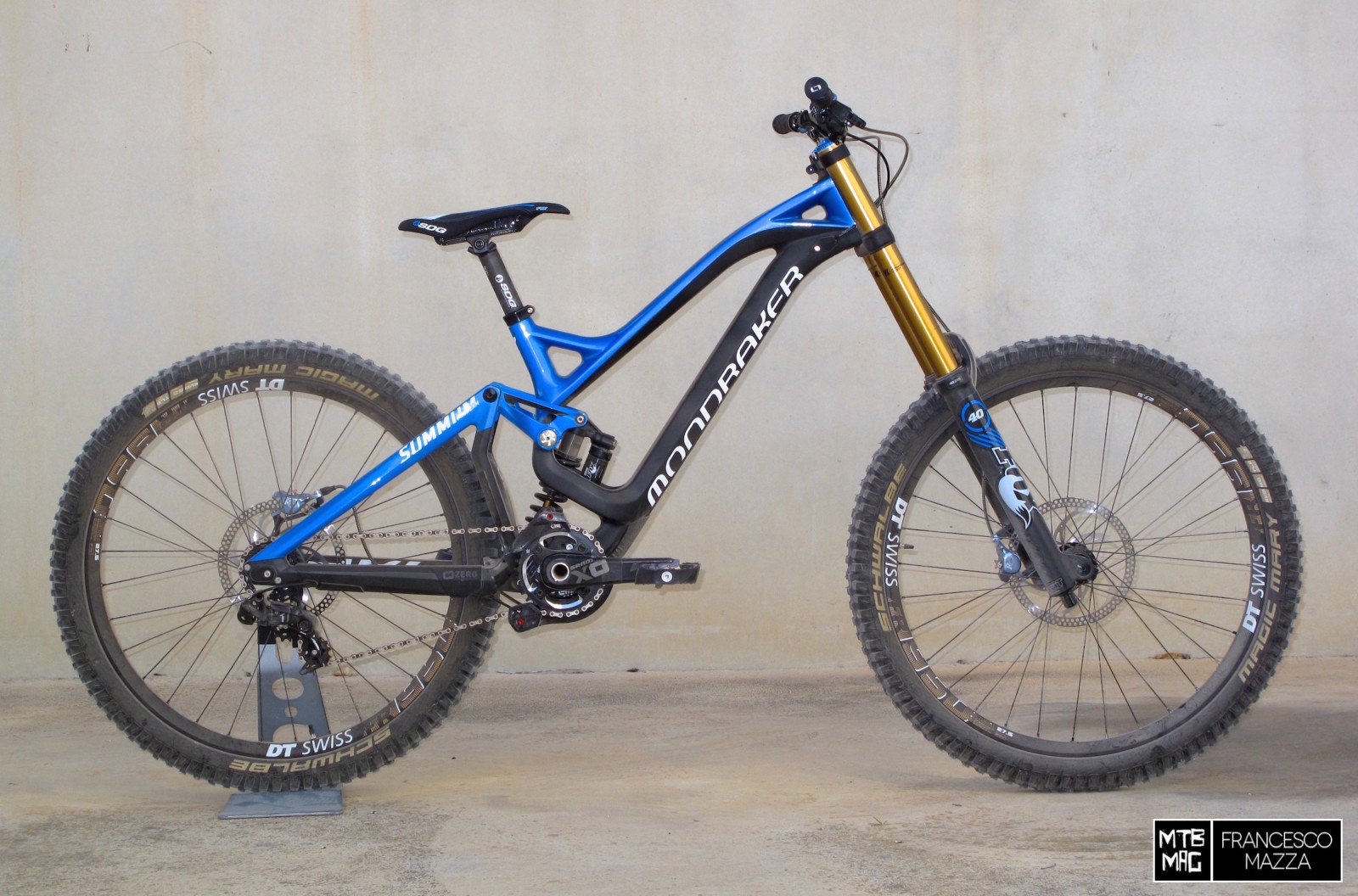 Developed with the Sam Hill’s support, the Pulse has a frame made of hydroformed tubing in aluminum alloy. The suspension is a Single Pivot with a rate modifying pull style linkage well tucked into the frame and protected from the mud. The system provides 200mm of travel to the rear wheel. The wheel size is 650b. Numerous protections are featured out back and up front on the frame. The rear derailleur housing feeds through the rear end of the frame internally. 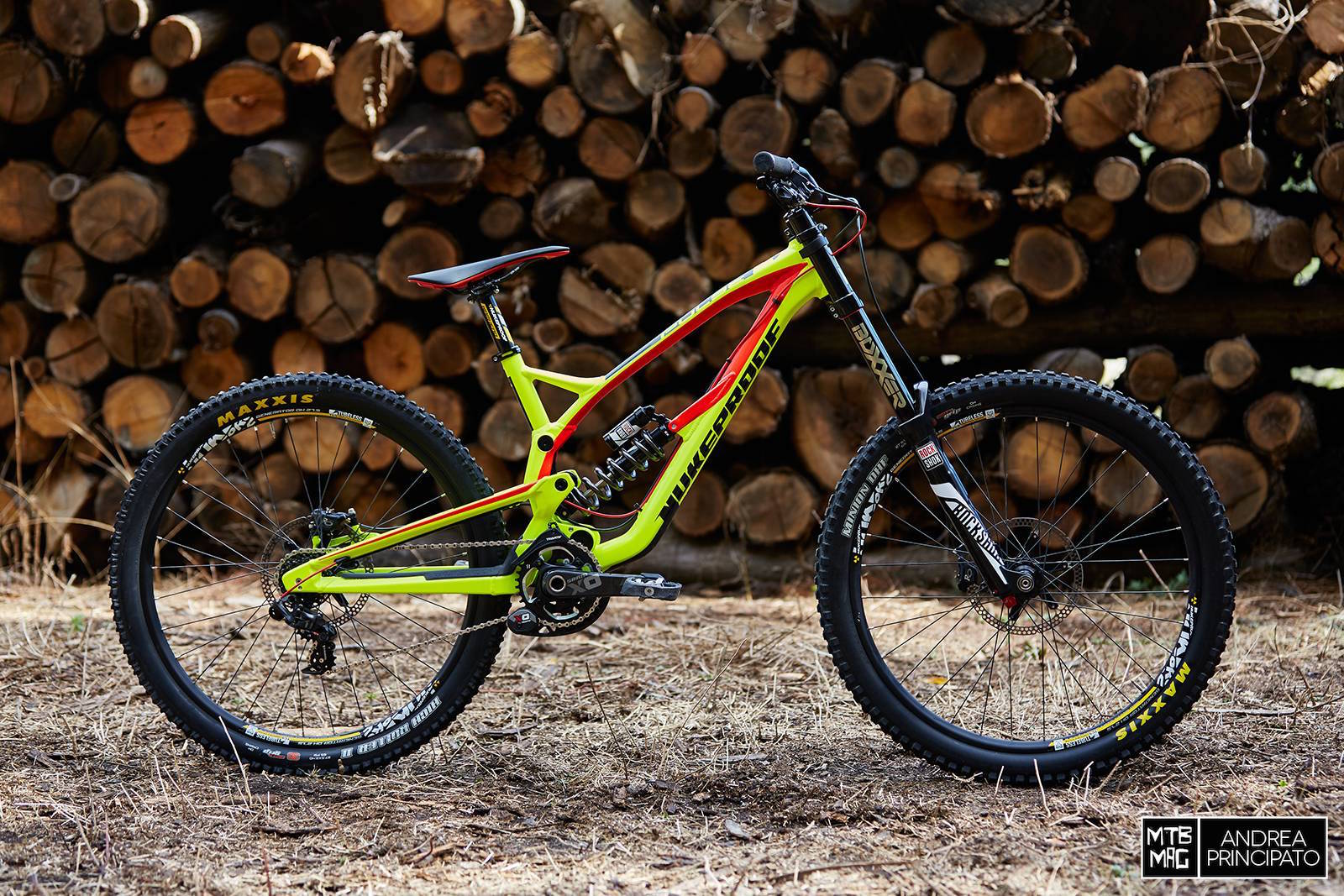 The first DH race bike in the history of the Canadian brand. Entirely of carbon fiber, including the upper shock link, it has massive lines and beefy construction. The suspension system is based on a Horst style link and offers 200mm of travel. The wheels are 27.5″ but you can also mount it with 26″ wheels thanks to an adjustable dropout and a removable lower headset cup. The geometry is adjustable via the Ride-4 system. Other features include various protections, an integrated fender and internal cable routing with a spot for the Shimano Di2 electronic drivetrain battery. 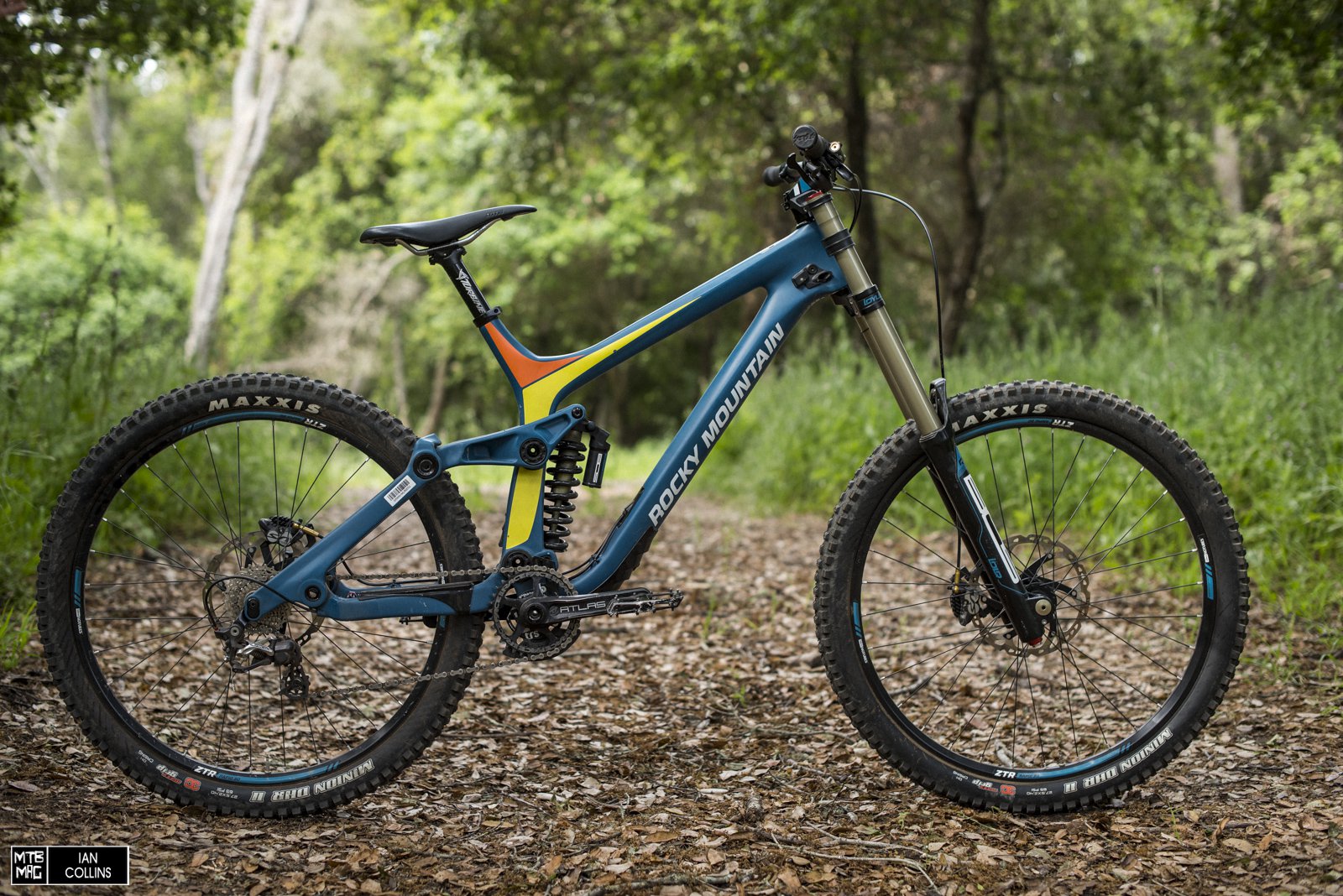 Riding the iconic DH bike of the Californian brand, Greg Minnaar has closed out yet another successful season with a 4th place in the Overall. The sixth version of the V10 features the classic VPP kinematics from Santa Cruz which generates 216mm of suspension travel. The frame is made entirely of carbon, including the upper linkage plate. The wheels are 27.5″. The geometry is adjustable between two positions, thanks to two different lower shock eyelet mounting positions. The frame has several rubber protections. 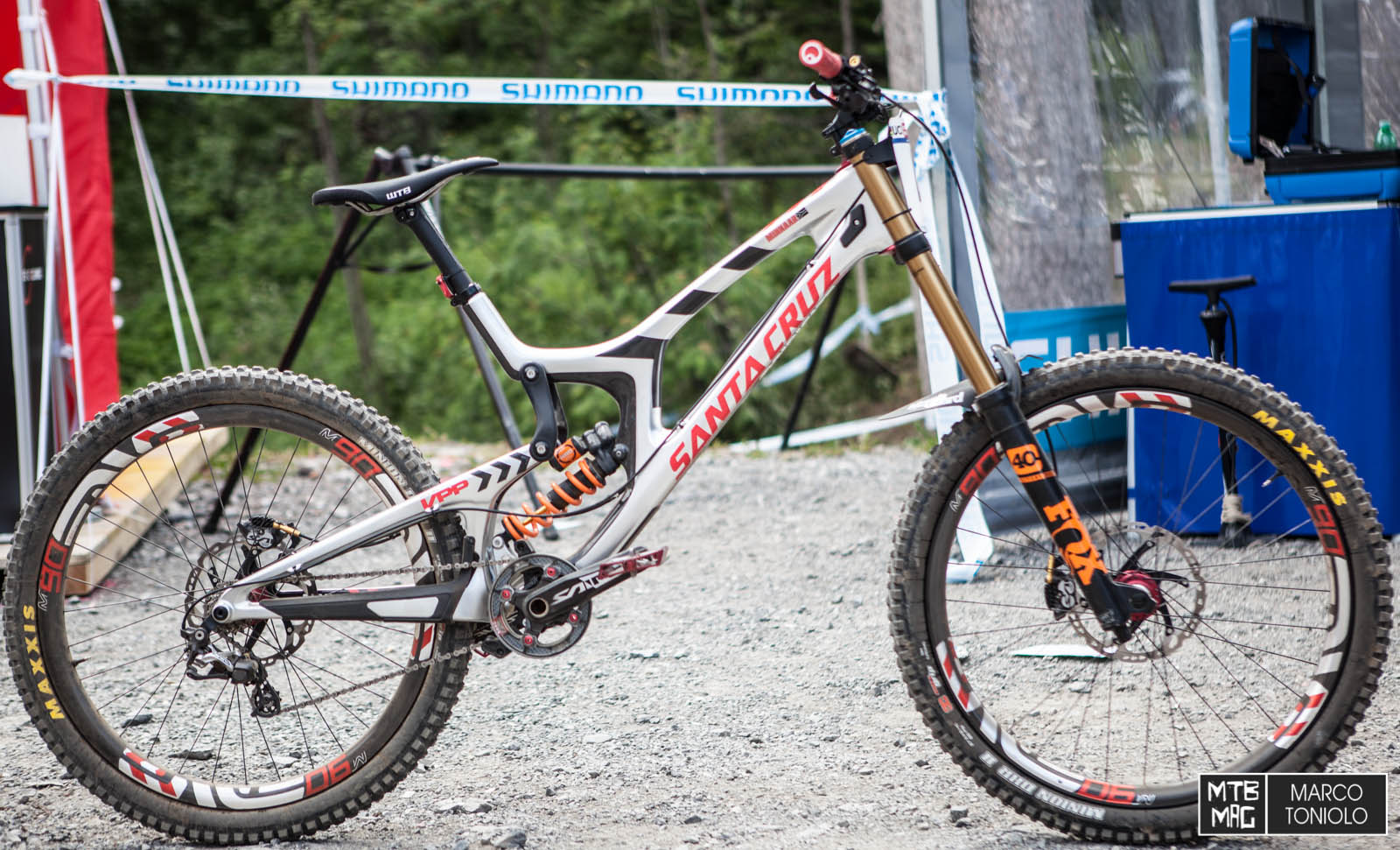 The downhill weapon from Scott has an aluminum frame with a Single Pivot with a pull style rate modifying linkage to provide 210mm of travel. Stock wheels are 27.5″ with possibility to mount 26″ wheels thanks to an adjustable rear chainstay length and two position BB height adjustment. The Gambler’s headset cups also allow you to vary by a +/-1° or +/-2° head tube angle. 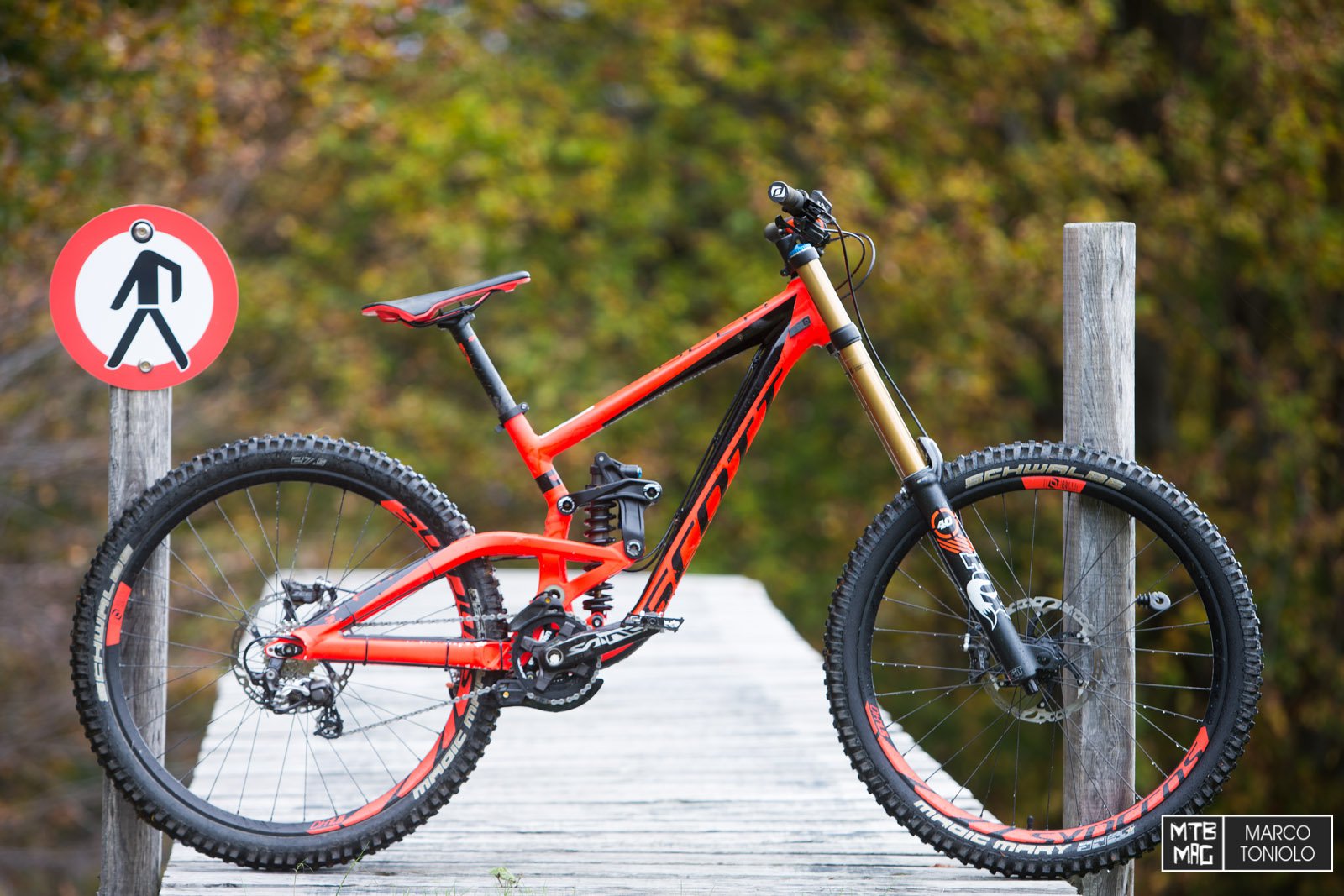 Between Loic Bruni, Troy Brosnan and Loris Vergier, results in 2016 were not lacking for Specialized Demo. The frame, with its unique asymmetric shaped seatmast, is made entirely of carbon, including the shock link. The kinematics are unsurprisingly an FSR-style Horst link that generates 200mm suspension travel. The cable routing is internal to the frame. The wheels are standard 27.5″. 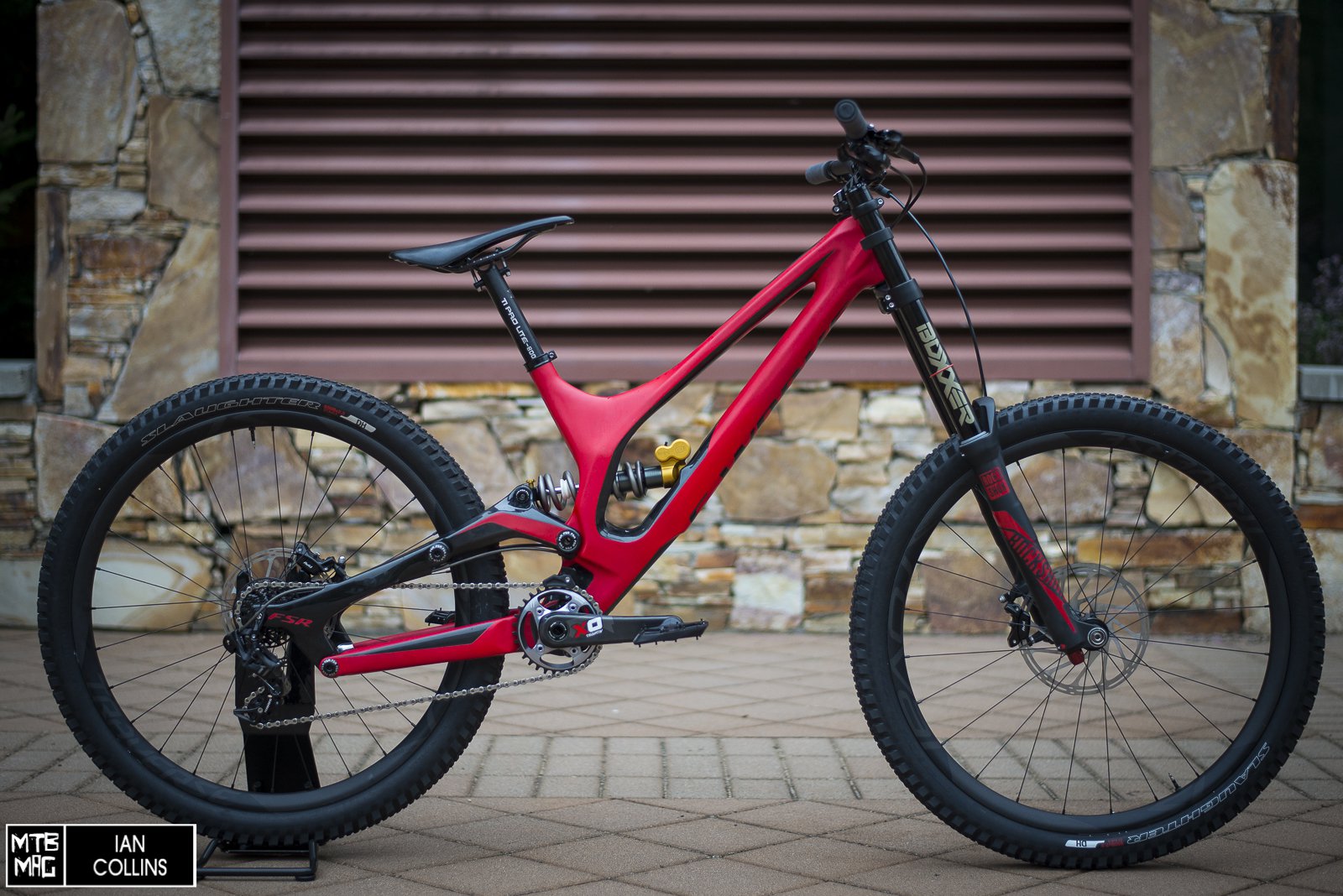 The bike with which Rachel Atherton has dominated in the World Cup, ending a record-breaking season. The Session frame is made entirely of carbon, including the shock link. The kinematics are ABP Trek, a Single Pivot with a link that runs coaxially with the rear wheel axle: this minimizes the influence of braking on the suspension work. With the Full Floater system the shock absorber is compressed from both sides and generates 210mm of excursion. Abundant protection is featured on the frame and it has an internally routed cable. The wheels are 27.5″ and the geometry is adjustable between two positions via the Mino-Link flip chip. 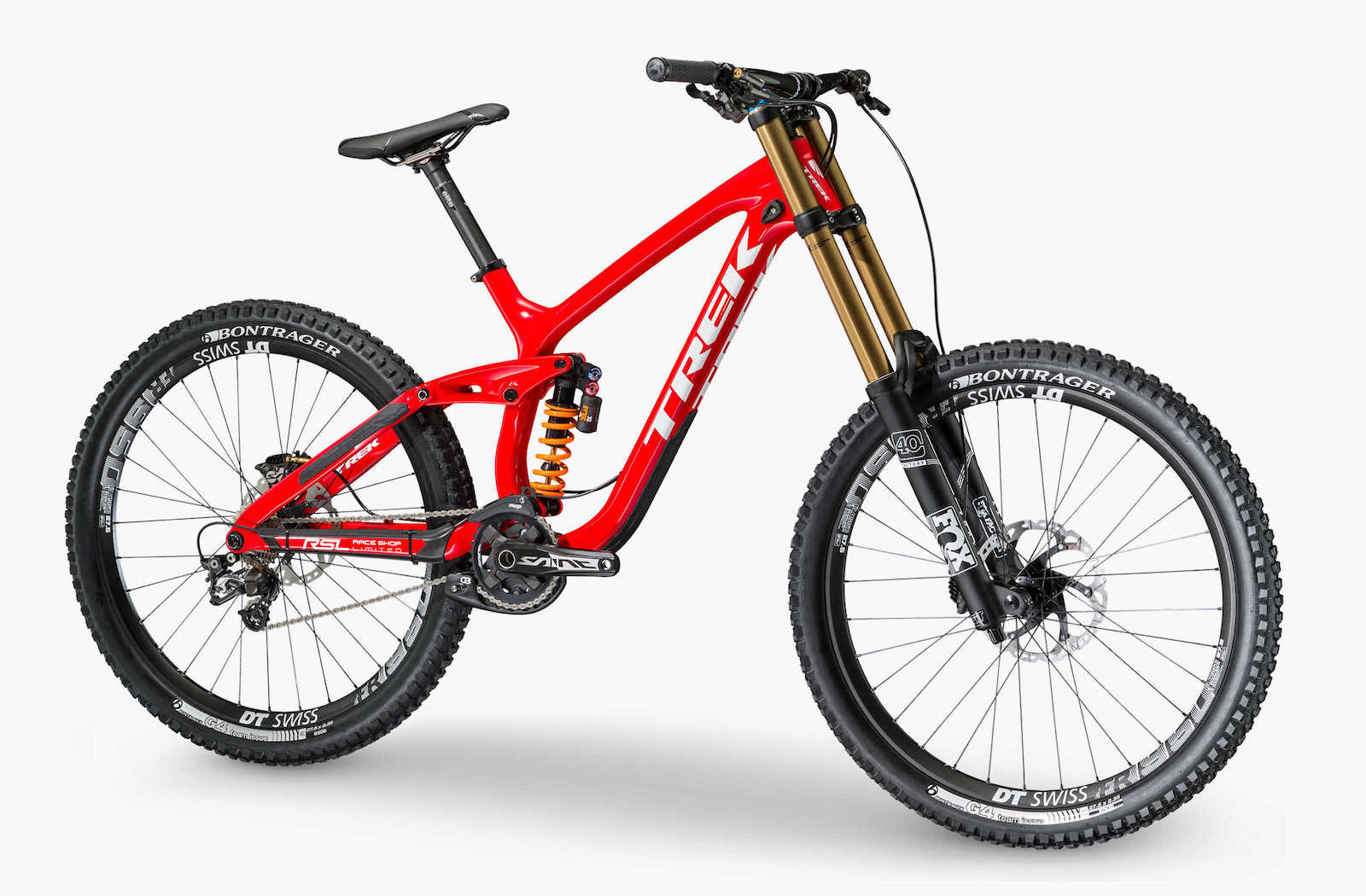 The Tues is the downhill bike of the young direct selling German brand. In addition to the excellent results at the Red Bull Rampage, this bike led Aaron Gwin to the top of the World Cup DH Overall. The suspension provides 208mm of travel using Horst link style kinematics. With the exception of the aluminum chainstay, the rest of the frame is made of carbon fiber. The wheel is a standard 27.5″. 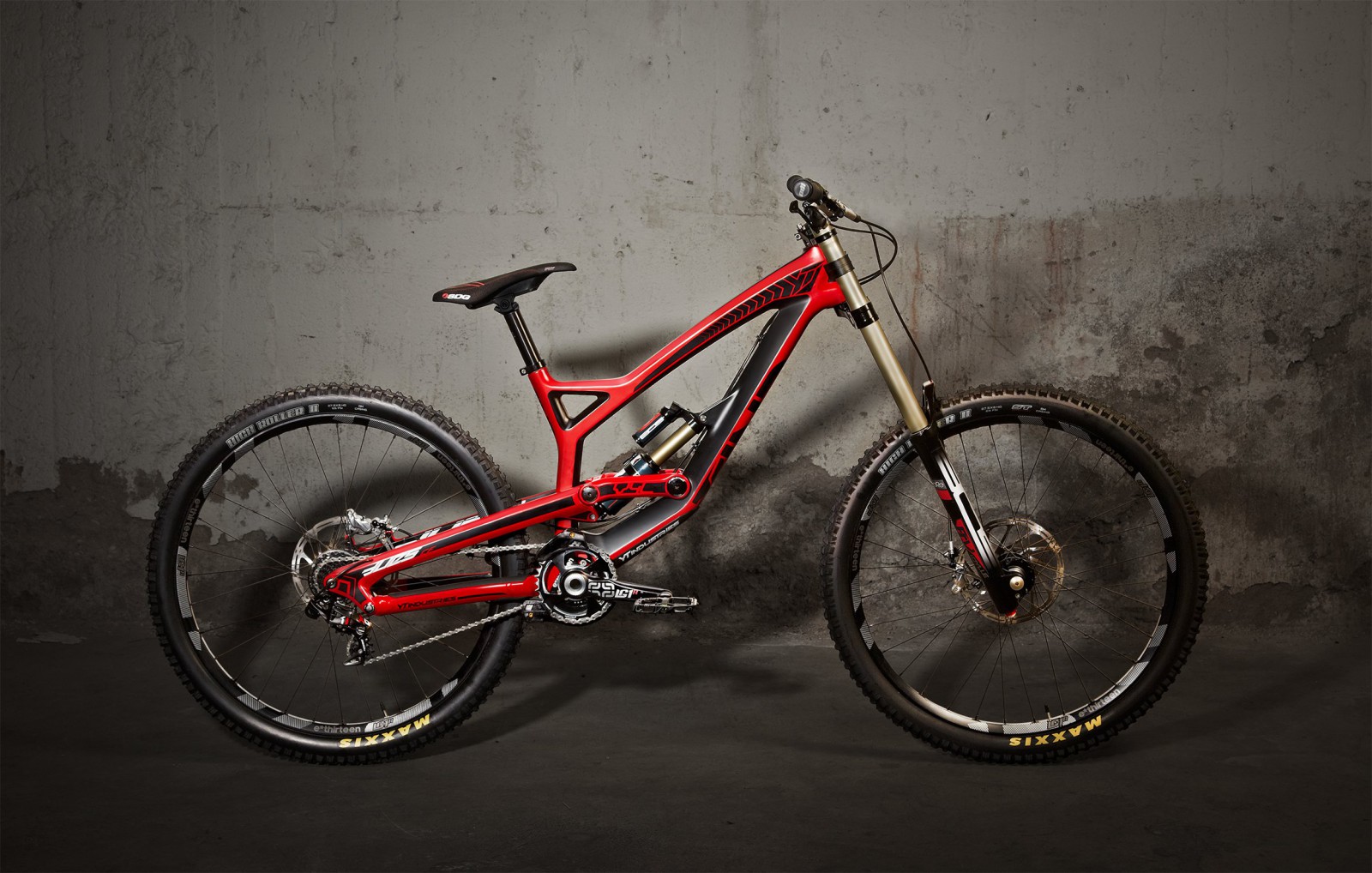