For our 2016 MTB Mag Readers Awards we’re moving onto one of the most popular categories – Enduro. Remember, the Trail Bike category is still open for voting and those who have not already done so may continue to vote. Within the Enduro category, 23 nominations have been selected among the models we’ve ridden/tested, with a few additions. If your favorite bike is not one that’s been nominated, don’t stress: you can vote for the best one amongst those on the list and write in the comments what your “outsider” favorite is. Just like the previous survey, click on the name of each bike and you will be directed to the relevant test article or presentation, with all the details.

Voting will continue until the end of 2016.

The leading European consumer direct brand puts 163mm of travel into their full carbon fiber frame featuring a Horst link rear suspension system and a truly original “Shapeshifter” technology. “Shapeshifter” allows you to use a remote on the handlbar to switch the travel down to 130mm while simultaneously improving the geometry for climbing as well. The wheels are 27.5″ and the fork has either 160 or 170mm of travel depending on if you opt for the Regular or Race version respectively. 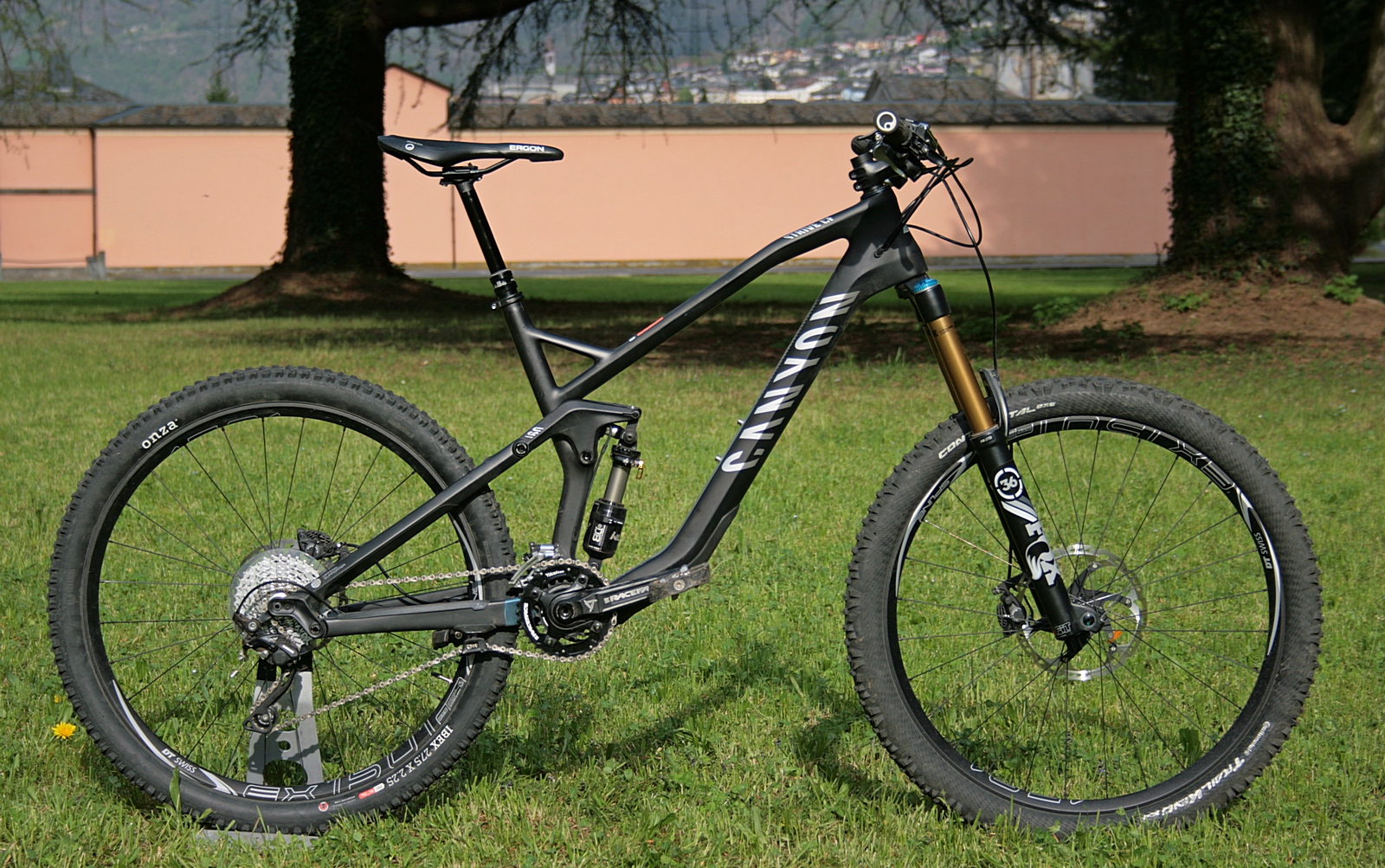 This Andorran bike won the EWS overall under Cecile Ravanel in 2016. The single pivot, linkage driven bike features 150mm of travel out back and 160mm up front. The frame is fully constructed of aluminum and the bike rolls on 27.5″ wheels. 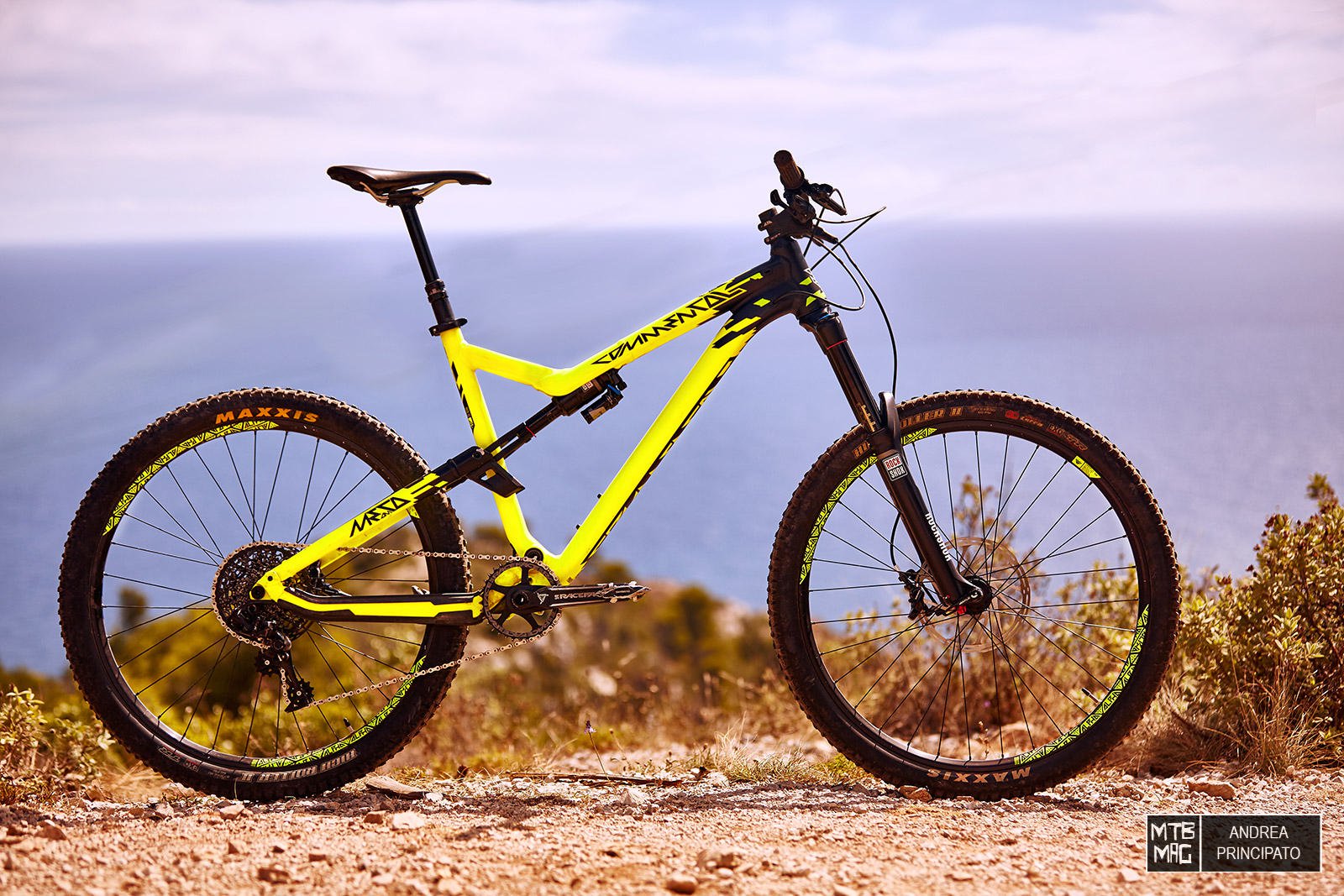 The Enduro race bike from Canadian brand Devinci utilizes Split Pivot kinematics that handle its 165mm of travel, combined with 160mm of travel up front. The frame is made of carbon with the exception of the chain stays which are aluminum. The wheels are 27.5″ and the geometry is adjustable between two positions, broadening the Spartans versatility. 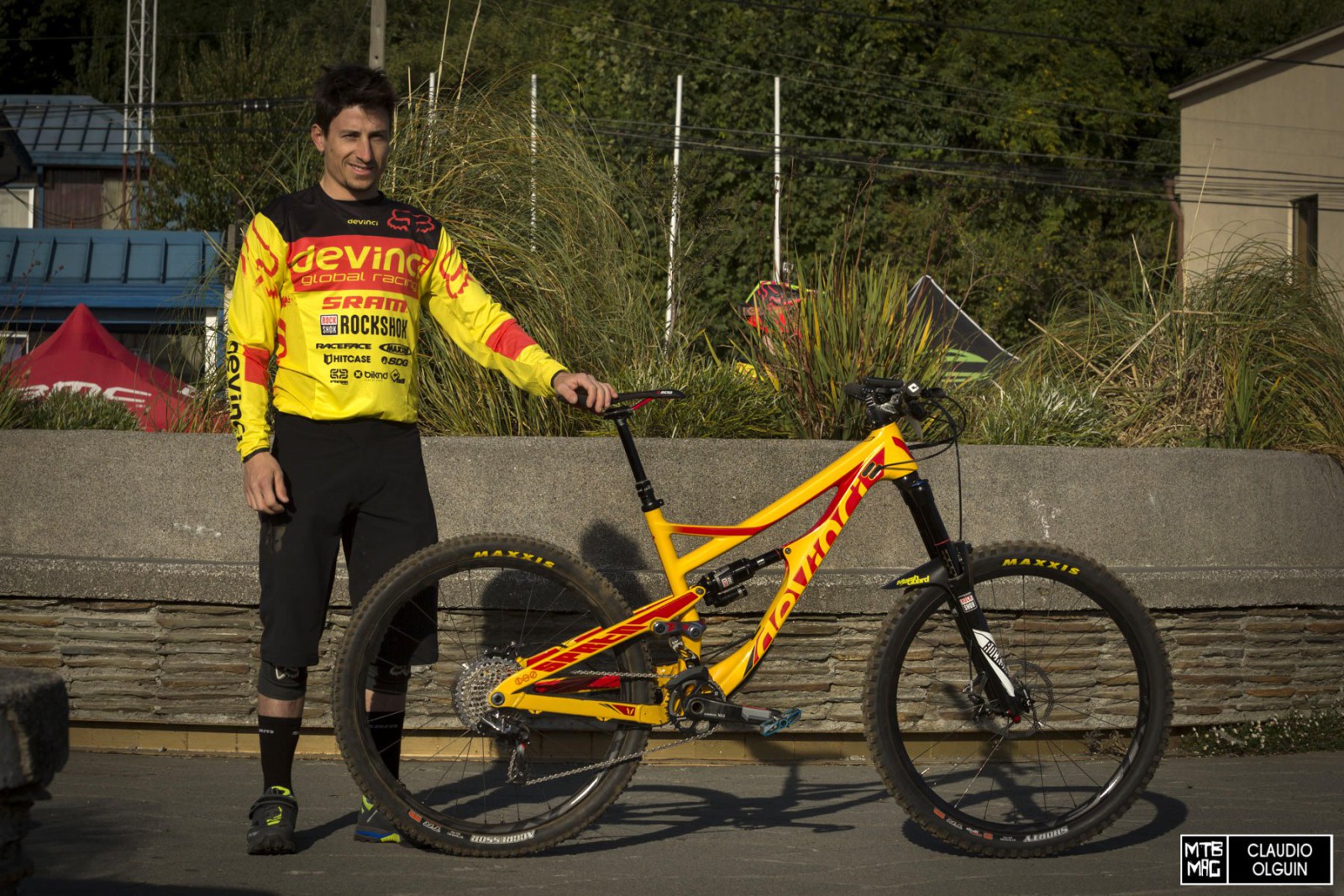 Evil’s first 27.5″ wheeled bike features a full carbon frame with a very aggressive geometry set. Its 151mm of travel is controlled by Dave Weagle’s “DELTA Link” which has a flip chip that allows two geometry sets: Low and Extra Low. The Insurgent can be run with a 150, 160 or 170mm fork. Some interesting features include FSA’s adjustable headset cup system, an integrated carbon fiber chainguide and a threaded bottom bracket. 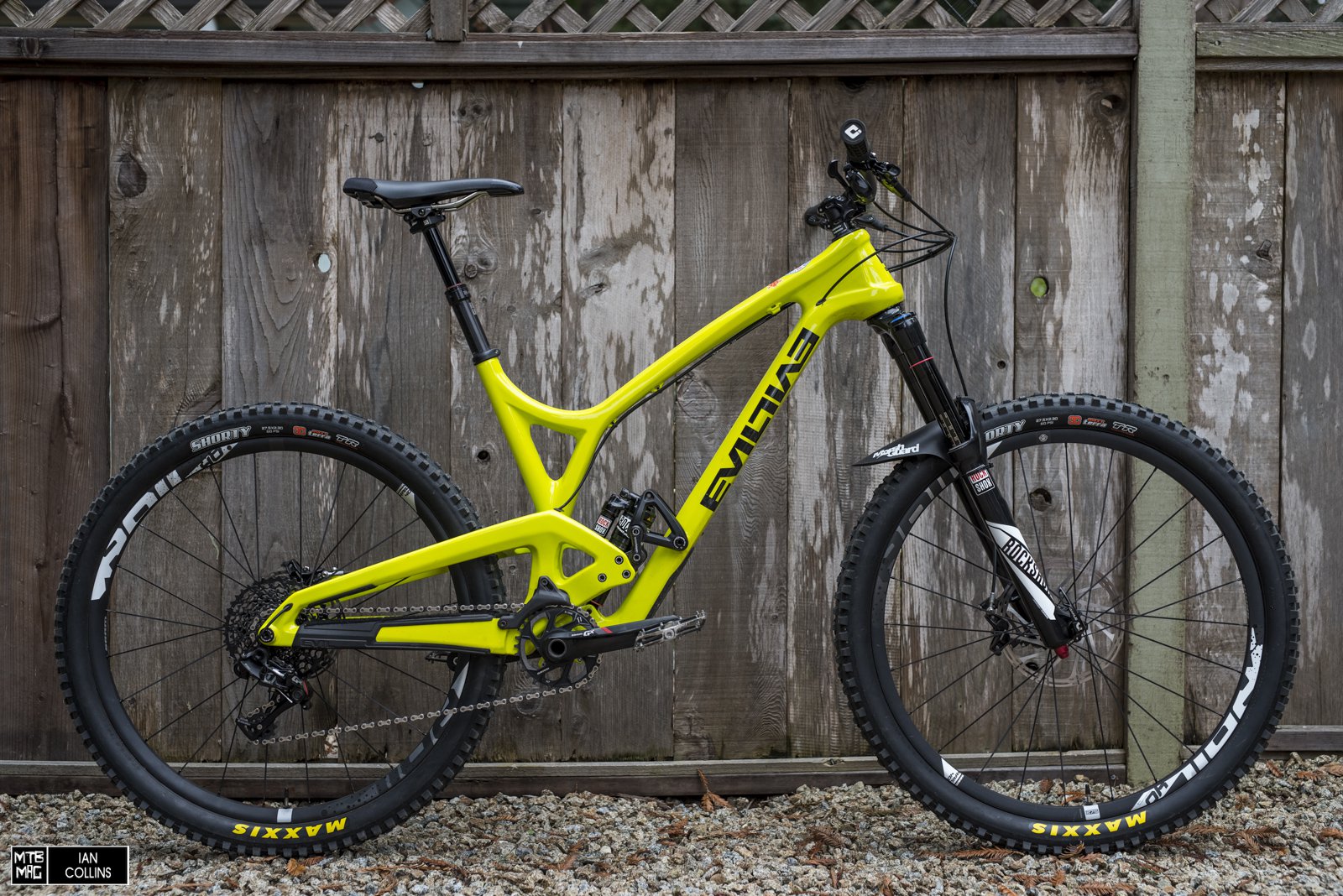 Sharp lines are seen throughout from the German brand on their full carbon SAM. It uses a single pivot suspension with a rate modifying linkage to generate 160mm of travel at the rear, coupled with a fork with matching travel. The wheels are standard 27.5″. The Reign Advanced has an aluminum rear end connected to the carbon front triangle through Maestro kinematics, which use 160mm of travel. The fork is also 160mm and at both spec levels, the 27.5″ wheels are made of carbon fiber. The geometry is downright aggressive. 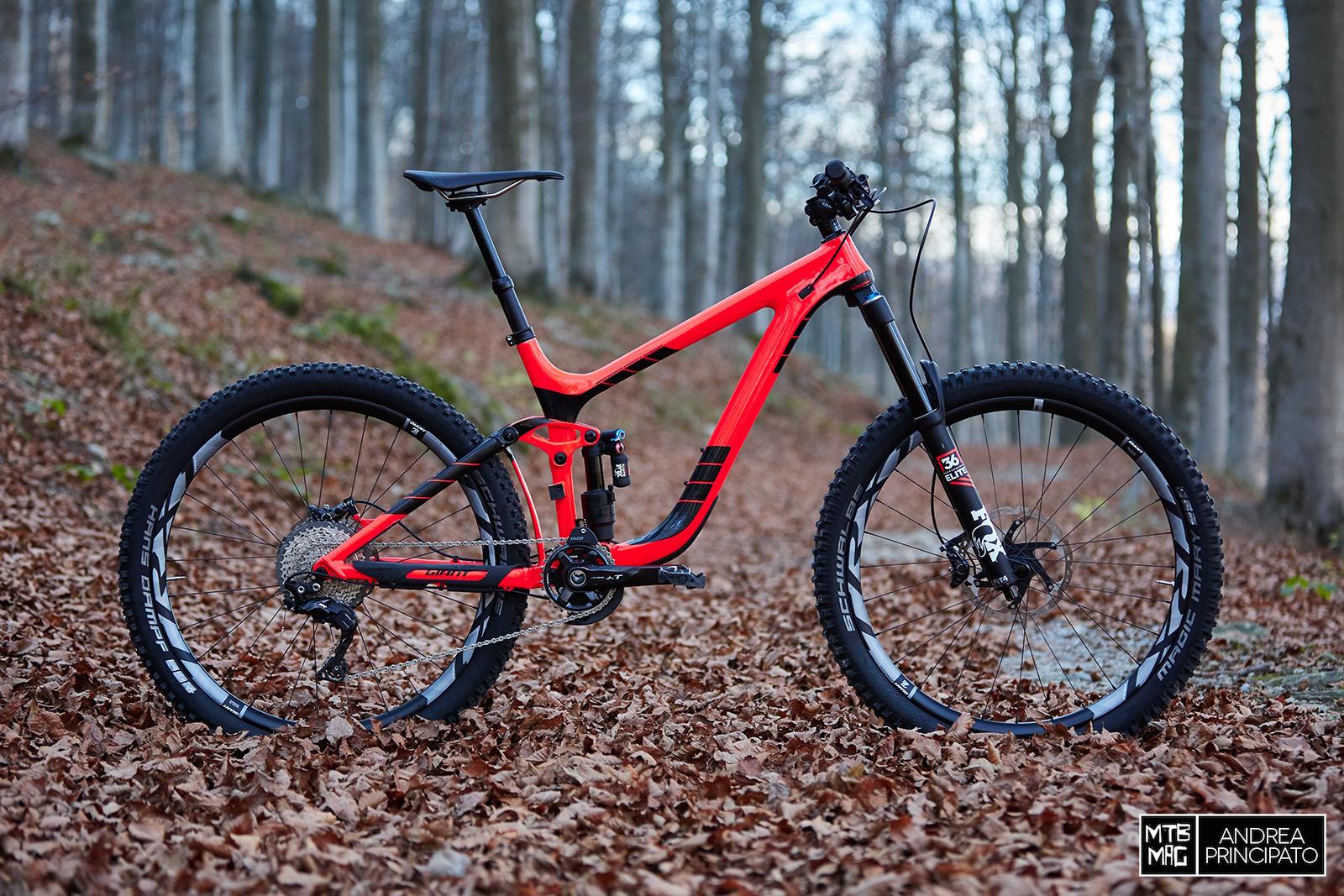 The winner of our enduro bike comparative test from 2 years ago has not changed much in those two seasons save a new shock. The frame features an all-aluminum chassis and Sanction’s i-Drive system helps to isolate interactions between the suspension and transmission. The wheels are 27.5″ and the front and rear suspension have 160mm of travel. 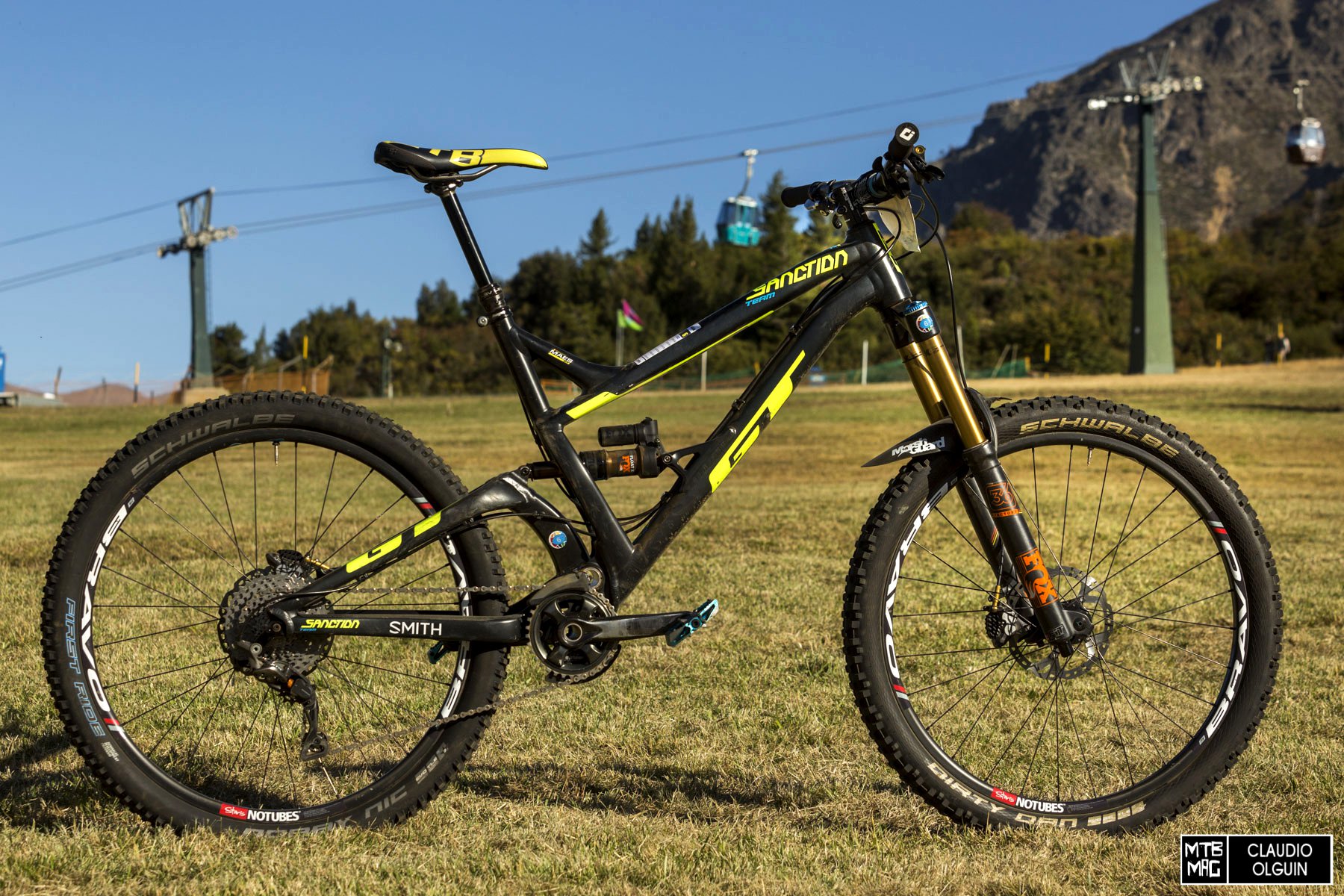 The third step in the evolution of the Mojo HD provides a frame made entirely of carbon fiber with DW Link driving its 150mm of rear travel. The wheels are 27.5″ and the geometry isn’t all that aggressive, but offers the ability to mount forks with both 150mm and 160mm of travel. 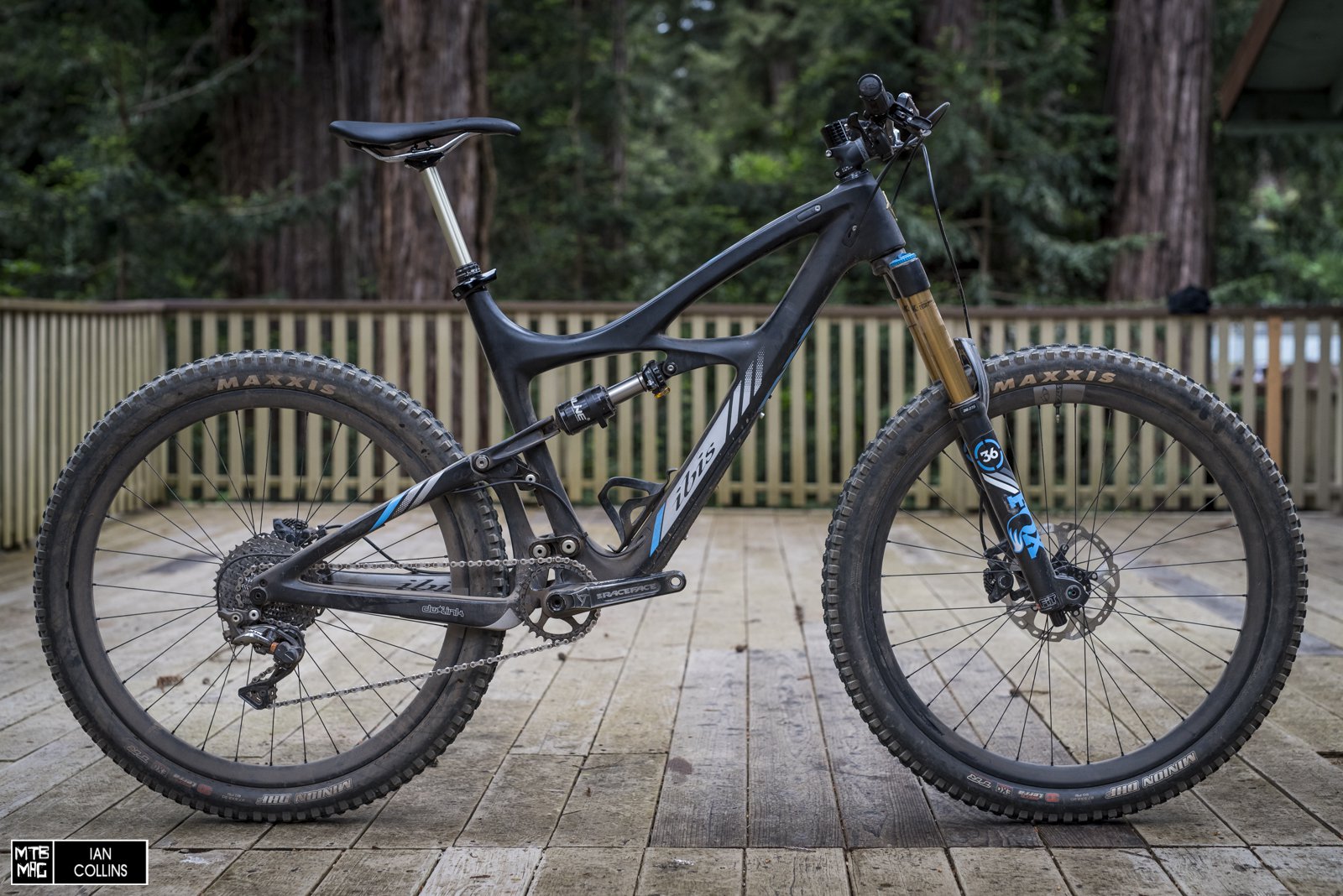 The Enduro race bike developed by Nico Vouilloz has a carbon chassis with an aluminum chainstays. The kinematic OST+ uses a Horst linkage to guide 165mm of travel, while the fork is 160mm. The wheel diameter of 27.5″ and the Spicy offers the possibility of setting up an electronic system working with a RockShox e:i Shock rear shock which automatically switches between Open, Pedal and Firm positions depending on your terrain. With a frame entirely made of aluminum alloy, the Damper uses a patented virtual pivot mechanism called the i-Link. Its wheel travel is 160mm front and rear and the wheel diameter is 650b. It is offered at a great price, especially considering it is handcrafted in Italy. This enduro bike from Iberian brand Mondraker uses a full carbon fiber frame, including the upper linkage. The kinematics are provided by their “Zero Suspension System” which generates 160mm of travel at the rear wheel. The fork has 170mm or 160mm travel depending on the spec chosen. The geometry is adjustable with regard to head angle and chainstay length and Mondraker’s Forward Geometry concept makes this a very aggressive bike. This Enduro bike from Canadian brand, Norco has 160mm of travel in the front and rear suspension. The kinematics, dubbed “ART” is based on a Horst linkage. The wheels are 27.5″. The frame is carbon fiber, except for the chainstays and linkage which are made of aluminum alloy. The stiffness of this frame is exceptional. Piloted by Sam Hill, this EWS race winning weapon has a frame made entirely of aluminum with a Horst style linkage offering 160mm of travel and the same amount on offer from the fork. It has 27.5″ wheels but is also available in a 29’er version. The geometry is particularly aggressive and the Mega is staunchly aimed at racing. An aluminum hydroformed frame brings life to the Orbea Rallon. 160mm of travel for both front and rear suspension with a Single Pivot linkage that sees a coaxial pivot at the rear wheel axle. Geometry is adjustable between two presets: Low and Lower. The wheel size is 650b. 27.5-inch wheels and 170mm of front and rear travel for Pivot’s heavy duty enduro bike, which boasts DH oriented geometry. The Firebird’s carbon fiber frame has a massive rear end (also carbon) and a fine tuned DW Link system for its kinematics out back. Internal cable routing and a compartment for Shimano’s Di2 electronic shifting are standard as well. Made with EWS in mind, the Slayer’s full carbon frame has an aggressive geometry set. The rear suspension has a Horst link with 165mm of travel combined with a 170mm fork. The sleek looking bike has 27.5″ wheels and adjustable geometry with 4 different settings. Also, the linkage hardware is single sided, providing a clean aesthetic and better heel clearance. It’s a full aluminum frame for the German brand’s enduro bike. The Uncle Jimbo runs on 27.5″ wheels. The suspension system operates on a Horst link offering 165mm of travel, while the fork has 160mm available. The well known Nomad’s frame is carbon fiber and available in two different price points/weights. It relies of course on Santa Cruz’s VPP suspension system, which provides 165mm of travel to the rear wheel. The Nomad typically comes spec’d with 160mm of travel up front and it was one of the first Enduro bikes with an aggressive 65° head tube angle. Available in both 27.5″ and 29″ wheel sizes, is the 29’er version that gains our nomination. The Enduro lives up to its namesake with 165mm of travel managed by its FSR Horst system and a 170mm fork up front. New for this year is the completely unique SWAT storage system and a threaded bottom bracket. The American brand spec’s their bread and butter enduro bike with 650b wheels and 155mm of Horst link driven travel out back and geometry based off of a 160mm fork. The Patrol has a full carbon frame with rear shock in metric sizing and a very smart set of geometry. After a massive change in their lineup, Trek gave the Slash 29″ wheels. It has 150mm of rear travel managed by the new ABP suspension system that is not full floater anymore. With the slackest geometry available on a 29’er, the bike is spec’d with a 160mm front fork. The Mino Link provides adjustable geometry out back while the brand claims that the Slash full carbon frame is as torsionally rigid as their Session DH bike. For some years now, the SB6c has dominated the EWS circuit, first with Jared Graves and now, currently with Richie Rude. The frame is made entirely of carbon and the Switch Infinity system handles 152mm of rear travel making for an effective interaction between the suspension and drivetrain. It uses a 160mm travel fork and 27.5″ wheels. It’s safe to consider Capra the bike that has brought major success to the German direct sales brand. It has a carbon frame, aluminum chainstays, aggressive geometries and excellent specifications offered at attractive prices. The wheels are standard 27.5″. The travel varies by spec: from 165mm to 170mm on the rear and from 160mm to 180mm up front. The rear kinematics are based on the Horst link. [Video] BMX vs MTB: The flair off